“Can you help me locate somebody from Durgapur?” asked Surojit – my friend from Atlanta.
This was about 3 years or so back.
“Who is it?”
“Well, his name is Bappi.”
“How do you know him?”
“He used to play the keyboards with us when we sang.”

A few minutes later, I had sorted it out. Surojit and his (now) wife Apala went to RE College (now NIT) Durgapur. Both of them were into music. Apala sang. So did Surojit – and played the tabla. And they still do. Bappi was somebody who lived in REC campus and was an excellent keyboard player. Bappi’s father was a REC staff member. Bappi himself is my age – which means much older to Surojit and Apala.

“He was a great player and an even greater person. But I have lost all contacts with him. I thought since you are from Durgapur and know so many people, you might be able to track him down”.
“Well, I will try”

My initial attempts came a cropper. And then in one of my India trips, I met Indranil Sengupta. And discussed this hitherto unknown person to me – Bappi. By the time I was on my flight back, I had a phone number from Indranil.

I did not pass it on to Surojit immediately. I needed to make sure I had the right person.

So, from a transit airport (I forget which one it was), I called up that number.

“Are you Bappi?”
“Who is this?”
“You will not know me. I am a friend of an old friend of yours – Surojit”
“Which Surojit?”. That is an understandable question since Surojit is not an exactly uncommon name in Bengal.
“Well, this is going to be tricky. But let me try. You play the keyboards, right?”
“Yes”
“Well, you played with Surojit and Apala. They used to study in REC.”
“Oh! Apala-Surojit? Where are they?”
“Atlanta, US”
“Where are you?”
“Also Atlanta”
“Are you calling from Atlanta?”
“No, I am on my way back from India. But I will pass on your number to Surojit – so he can call you directly.”
And that is how I was able to put the two (well, three) old friends together.

And started a new friendship myself. I kept up with Bappi from that day. He went thru a fairly lean time during Covid – work wise and health wise – and we stayed in touch. I always promised to make some time for him during my trips and finally, I was able to do so this time.

It was great to know about his life history. His successes, his rough patches and then his bounce backs.

But the greatest surprise was yet to come. I was talking about his family and then the topic of his wife came up…

“Monimala? This is Rajib”
“Oh! Bappi has told me about you”
“Are you from Debipur?”
“Yes”
“Which house”
“Kundu bari”
“Wait, Kundu bari? Where is that?”
“Near Buro Shib tala”
That took me a few moments to remember exactly where that was.

You can only imagine the excitement! I am fairly sure – given the age group – I must have seen Monimala in one of the two Durga Pujas in the village when we visited every year. There were not too many places for young kids to hang around in a small village. Just never knew that I would be talking to her some 40-50 years later.

It did not end there.

“So, how did you come to Durgapur? Thru marriage?”
“No, my dad moved us to Durgapur”. That sounded just like what had happened to me.
“Where did you live?”
“Rahimpath”
“Where in Rahimpath?”
“Quarter number 10/10”
“Hmm… two streets over, my uncle used to live. I used to go there 3–4 times a week. It was 14/28”
“What was his name?”
“Prasanta Pan”
“Dola Pan’s dad?”
“YES!! Dola is my cousin”
“And she was my classmate. We went to school together. I used to go to her house too!! “
Wow! What is the chance of that? Looks like I must have met her in Durgapur too!!

Next time, I have to meet Bappi’s whole family. I am sure there are some great stories from Debipur and Rahimpath we can go over. 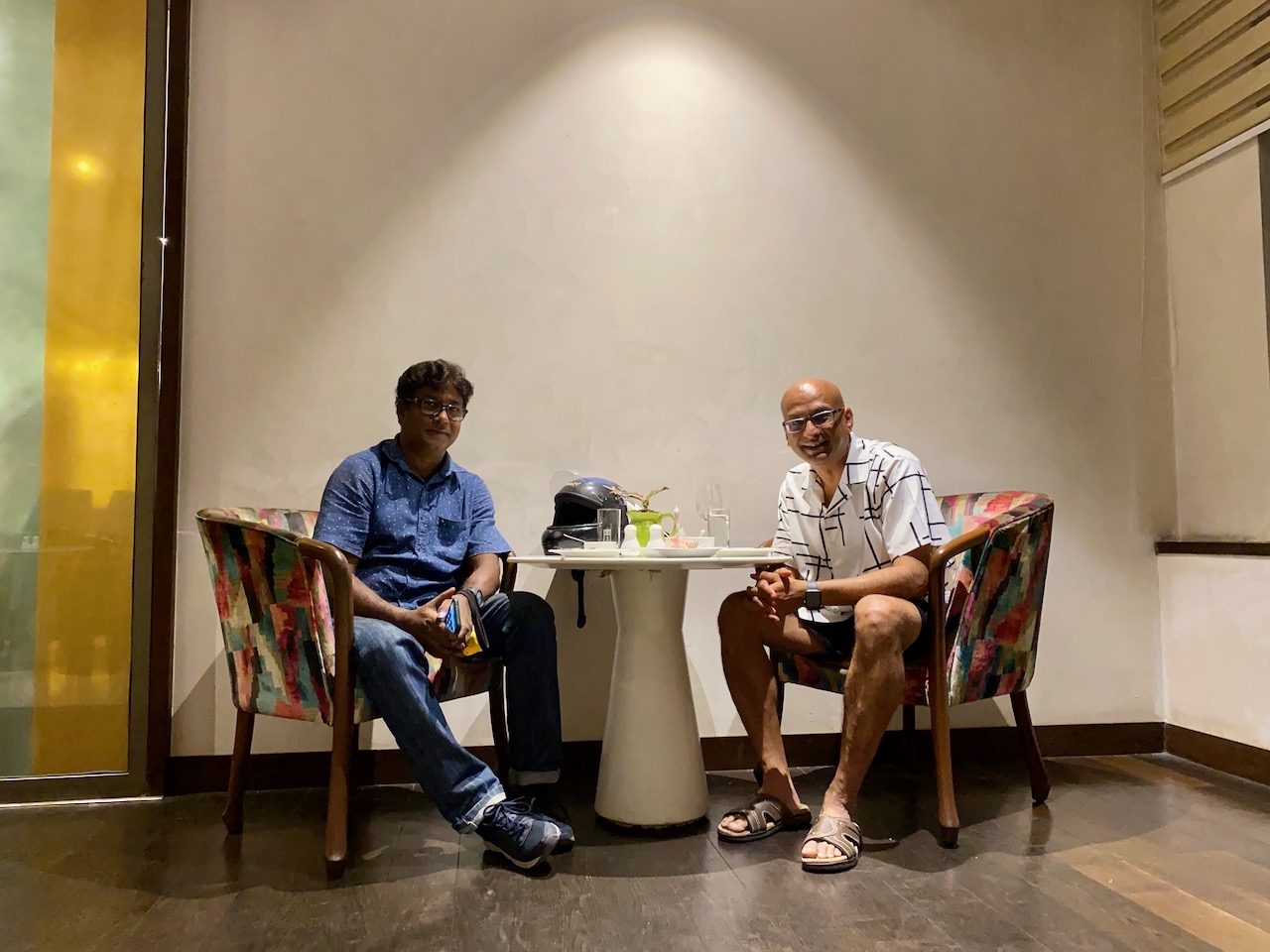 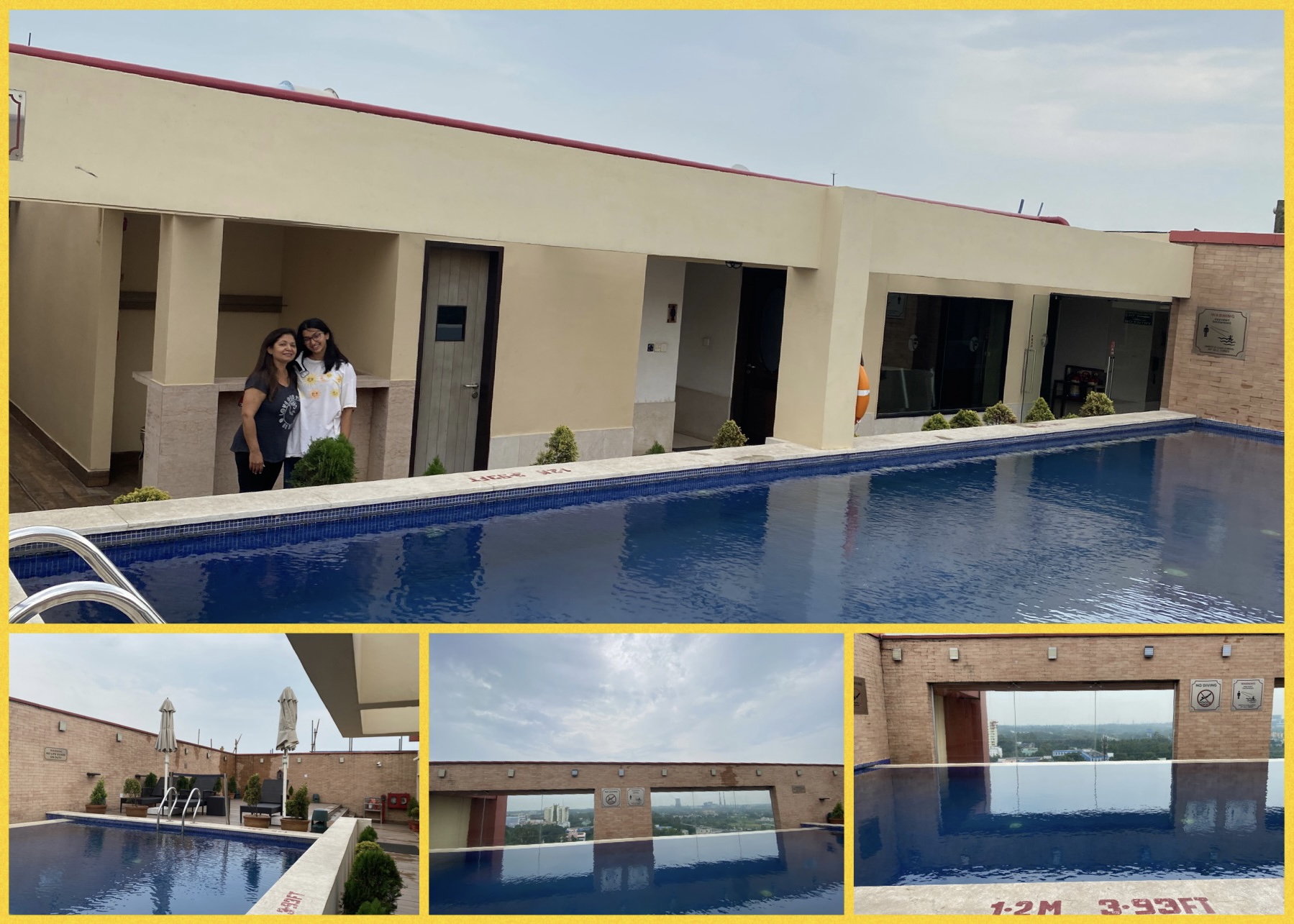 An olden goldie from the past

This is about half a century old picture. Niki recognized Didu right away. And concluded by reason that the other two had to be Sharmila and her brother. (which is true). 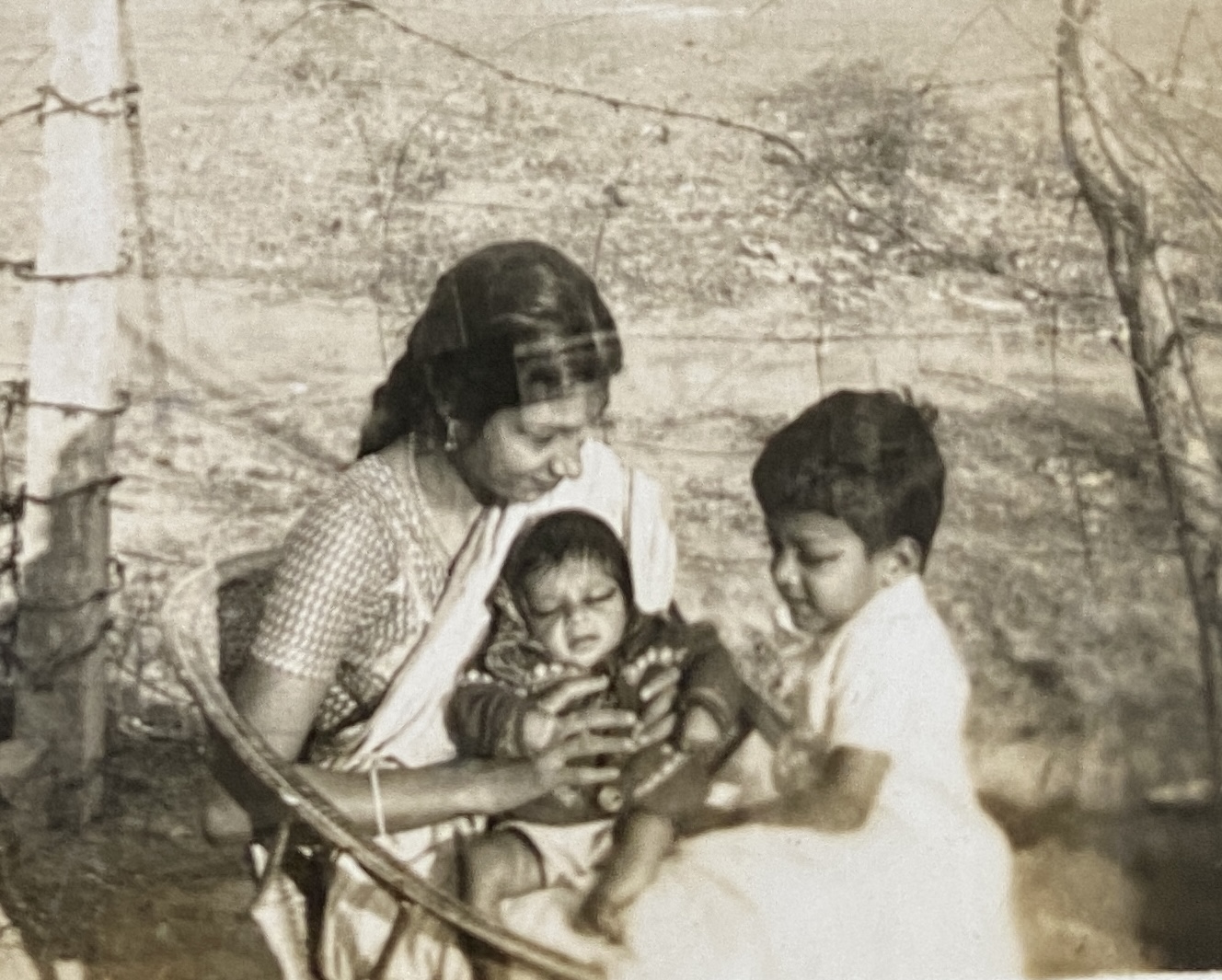 Nikita poring thru old pictures of her grandparents 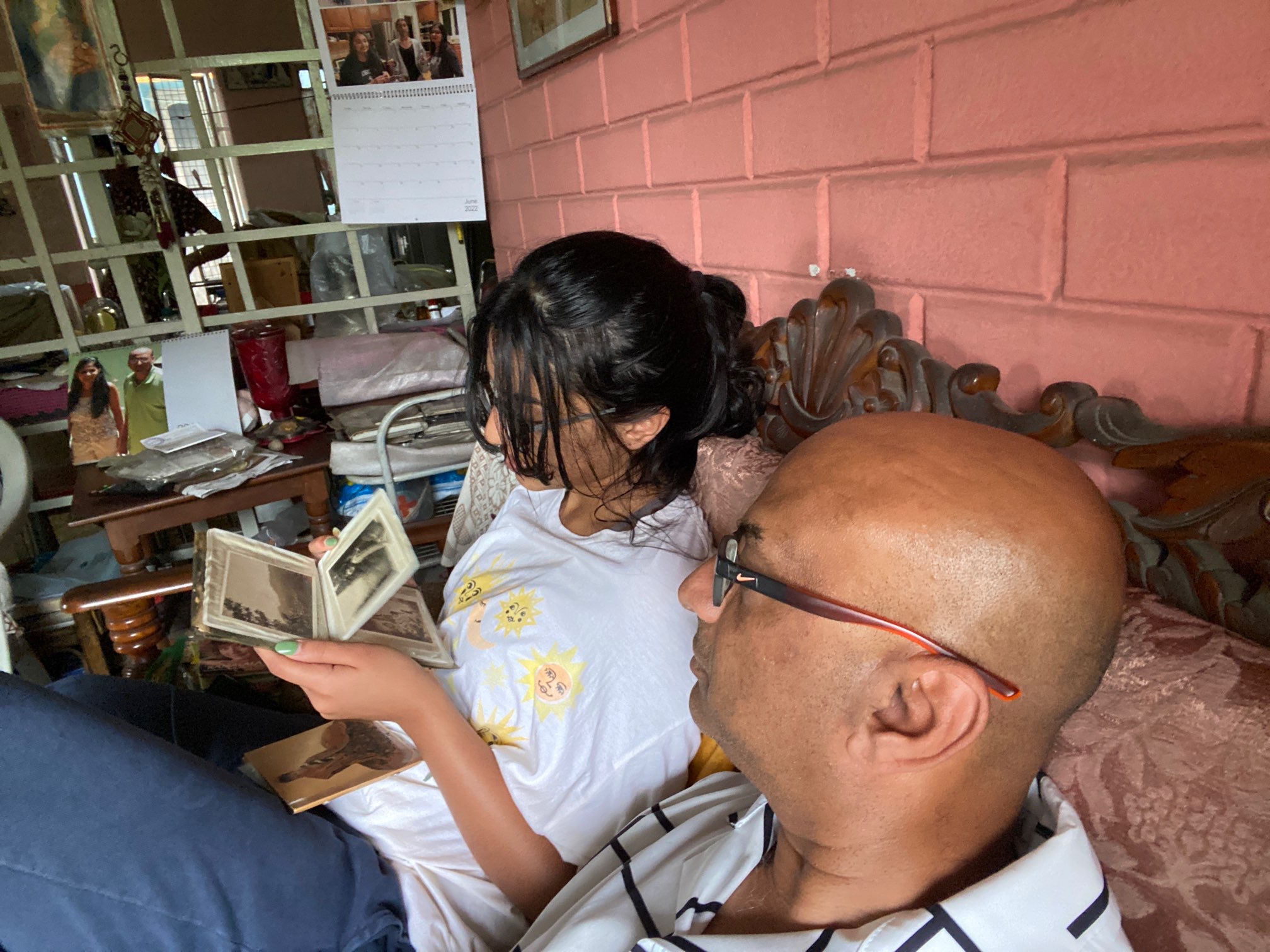 Usually, I am the one that gets up in the morning and starts walking – sometimes running – from hotel to my mother in law’s house. It is a 15-20 minute walk. That is usually followed by a continuous loop of “Do you want to eat this? Do you want to eat that?”and me just simply saying “No” every time. Finally, I would leave and as long as I stay within her earshot, I can hear her complaining that I did not eat anything.

This morning Sharmila and Nikita joined me in the walk. 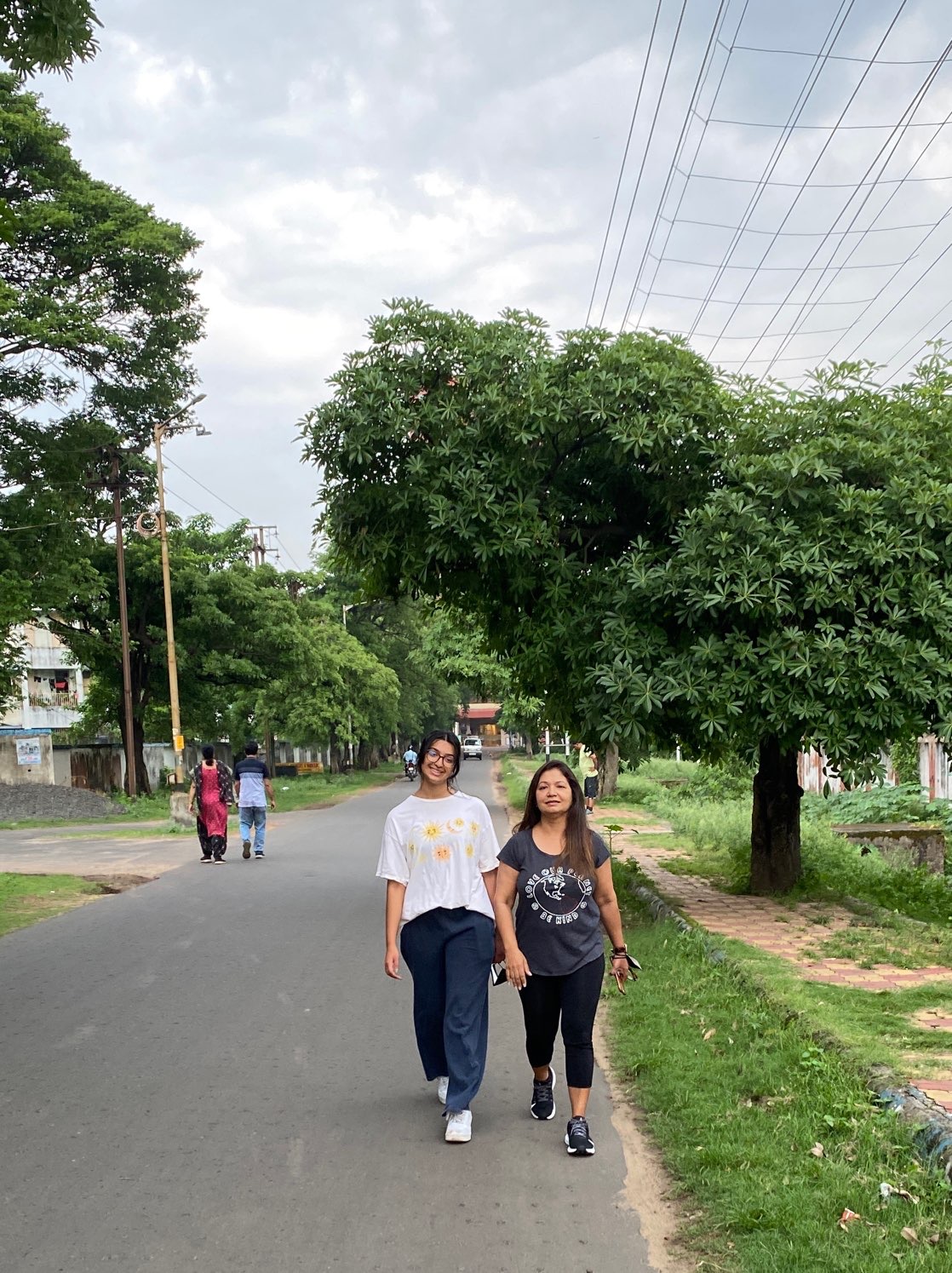 One solo picture with the popular lady of this trip 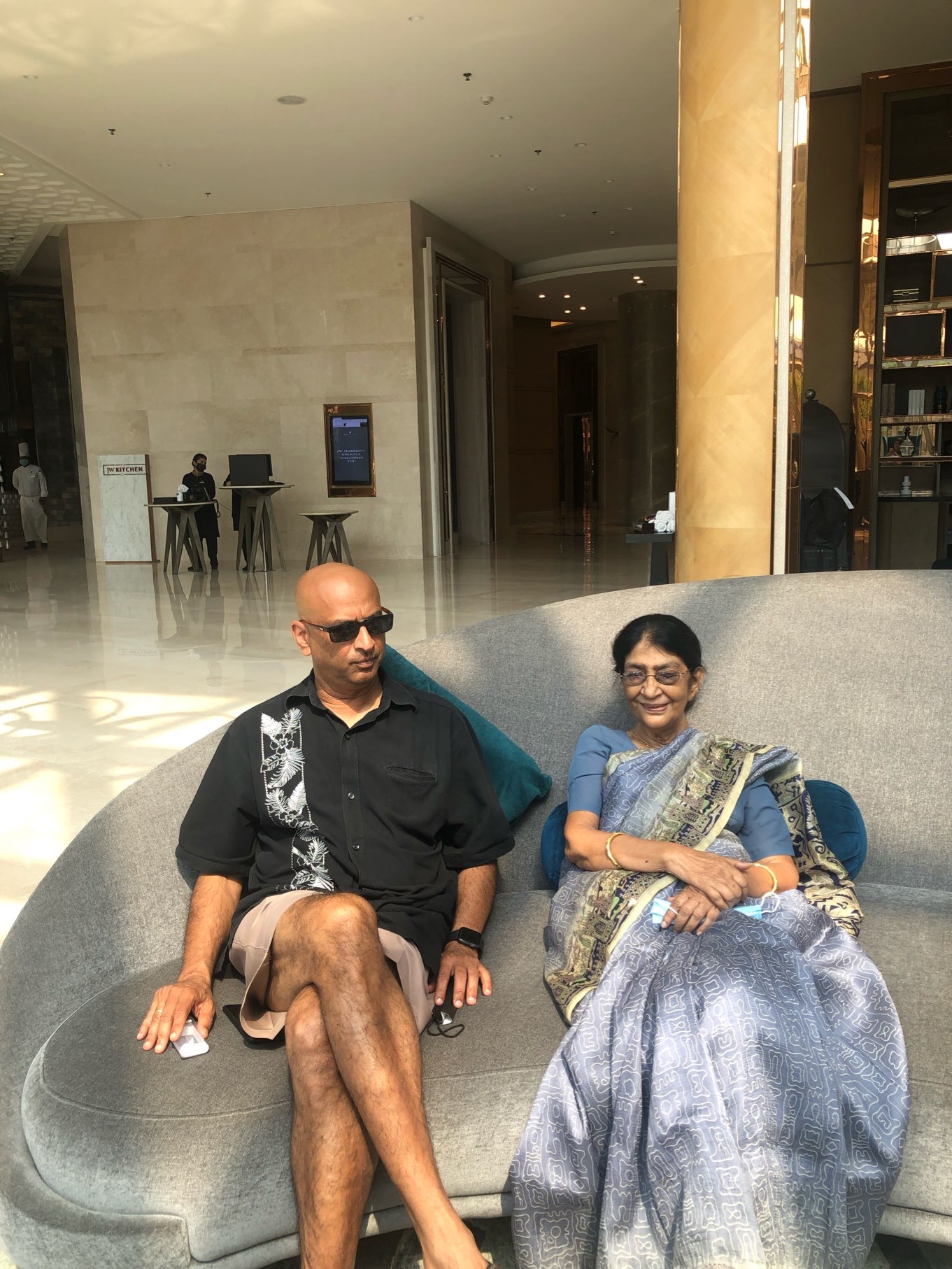 How he would have loved to see this

We reached Durgapur at a fairly fast clip. Door to door in 3 hours. Nikita made a beeline to Didu’s kitchen, grabbed a biscuit and ran out to feed the fishes. I took her pictures and stood there watching her. My father in law would have loved to see this. Unfortunately, we lost him nearly four years back!

Second goal for this trip accomplished. (First one was to see Didu). One last one left. But first I will take her to some of my old spots in Durgapur. 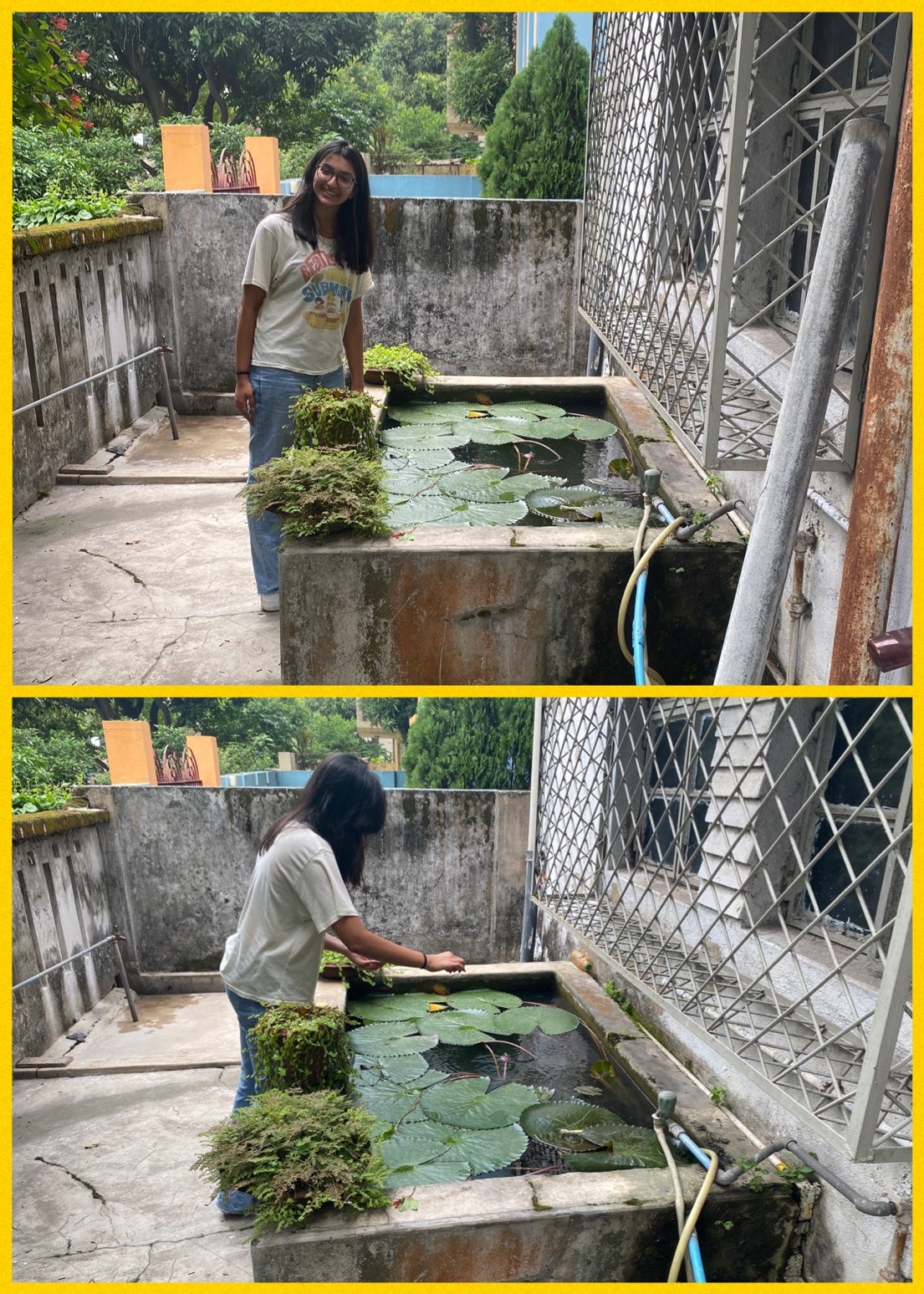 You will be surprised how much leverage some fish might have

Nikita wanted to see Didu. So, Didu came from Durgapur to stay in the hotel in Kolkata with us to spend some quality time. And after that, we are all going to Durgapur today. For a very brief stay.

I needed to go anyways to drop my mother in law. But Nikita said she wanted to see the “fishes”.

The story behind this goes like this – My late father in law had built a small concrete open top water storage outside the house in his yard (see the picture). Growing up, we called such a structure “choubaccha“. And in that, he put some water lilies. And then, for good measure threw in some fish. Who quickly multiplied.

Those fish were the prime attraction for the two granddaughters every time they visited my inlaws. Nikita and Natasha would stand outside that structure for long periods of time. And grandfather would supply them with small cookies one at a time. And they would crush the cookies in their palms and throw the small bits to the fish and watch all the fish run around jostling for those tiny morsels.

It is one of the lasting memories they have of their grandfather’s house and actually of grandfather himself.

To relive those memories for a few minutes, we are going to make the trek to Durgapur today for a day or two. Fortunately, the skies are overcast and hopefully the heat won’t kill us! 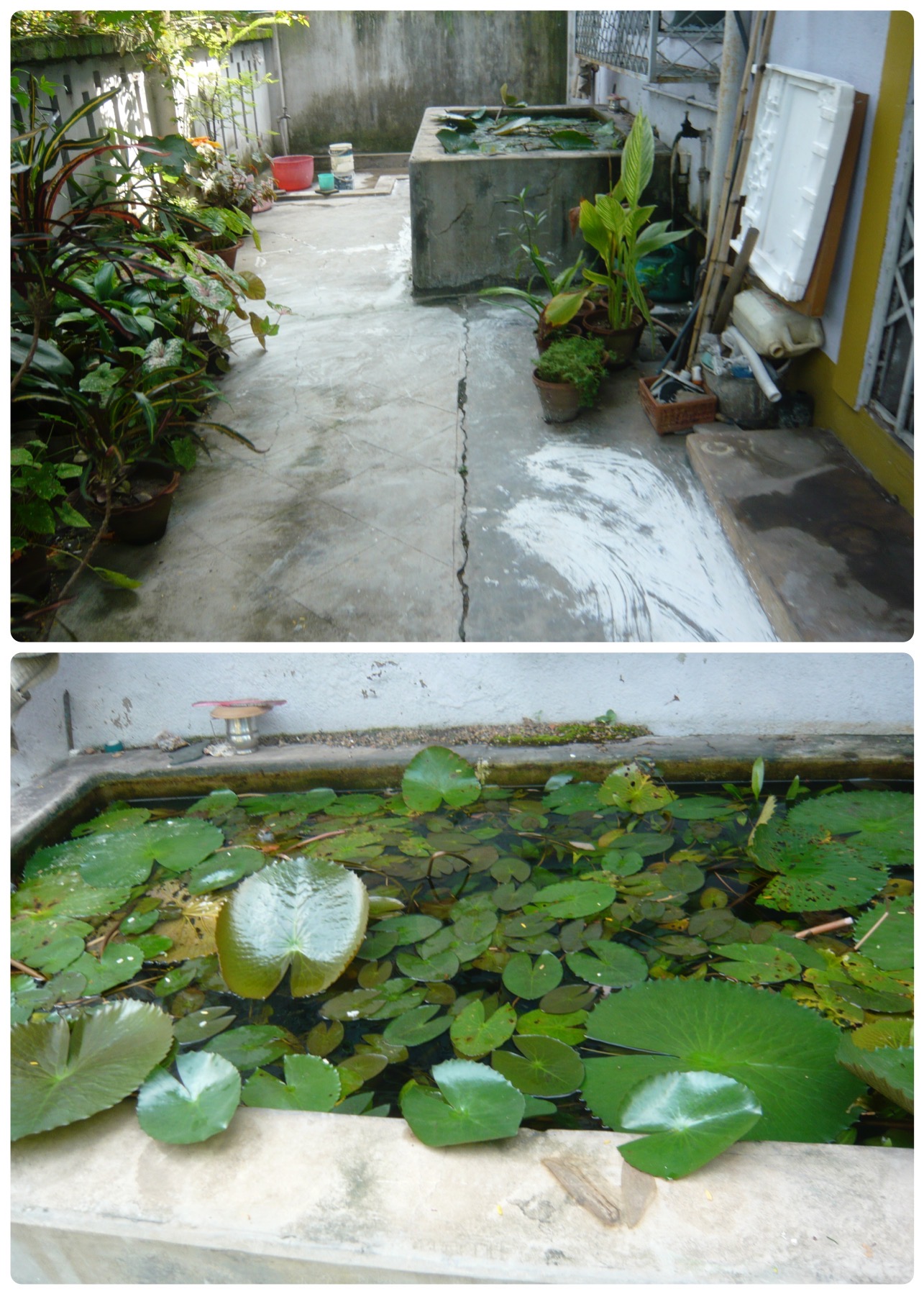 One last gathering in Kolkata for this trip

This evening we got to see the only other cousin of Sharmila (and his wife) we had not met during this trip. I am fairy sure that other than a family wedding event, this is the only time my mother in law got to see pretty much all her family in one place (over four days though). 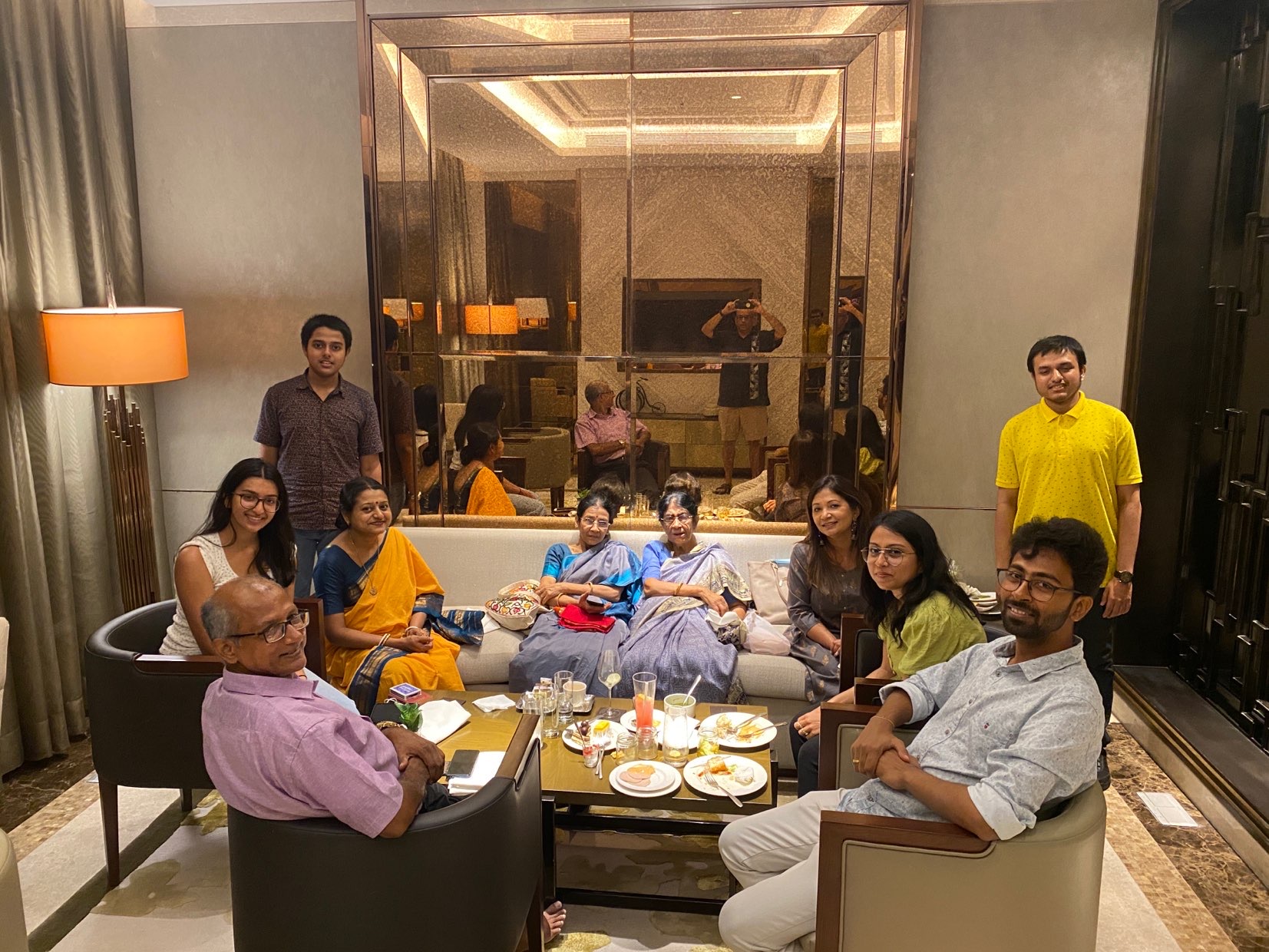 “Hey, that cocktail matches your name!”
“That is because I created it!”

Last couple of trips to India, I had gotten to know Juhi. This time, I had not noticed her initially – those masks still make facial recognition tricky for me – but one of the nephews pointed out “Juhi didi na?“.

As I was talking to her, I noticed that the advertised cocktail at the bar of the Executive Lounge carried her name.

“Looks like a summer drink to me”, I said as I read the ingredients.
“Yes sir, best on a hot day.

“Let’s make two of them. And then I will take a picture of the drink with you.”

Sharmila and I both tried the drink.

It tasted great. The elderflower left very fragrant notes and the vodka was mild enough. Probably better suited for being by the pool in heat rather than in an air conditioned room though. 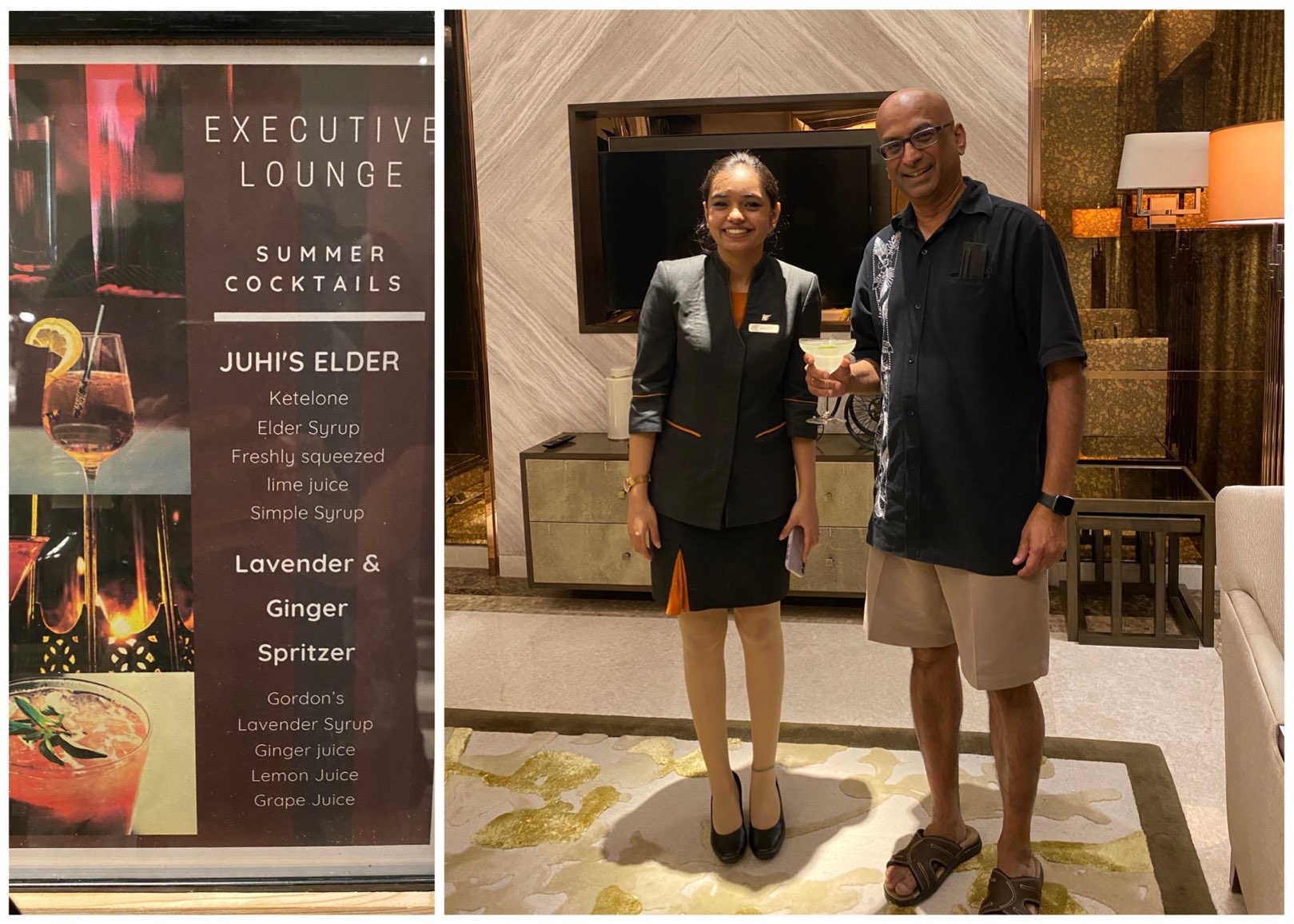