Somebody explain this to me… This was in downtown Burlingame, CA. I was waiting for my friend to show up for dinner. While strolling up and down the street, I caught notice of something peculiar. The parking time restriction was 24 minutes! 24 minutes???

I looked up the internet. Sure enough, downtown Burlingame as parking restrictions of 24 minutes, 2 hours and 4 hours! 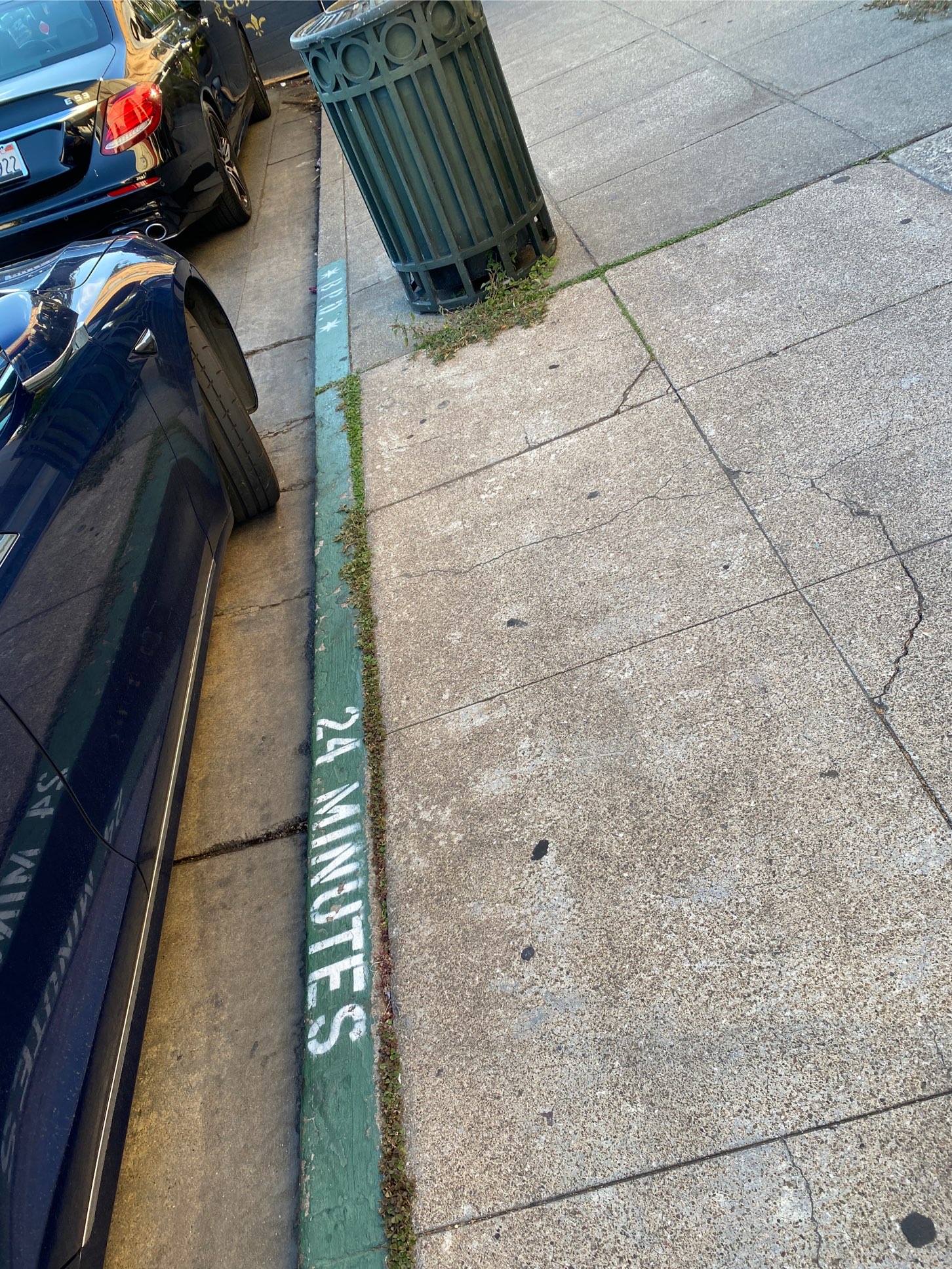 Here is another question that has bewildered me (like that “Enter Only” sign that I wrote about before).

Every morning, before daybreak, I come out and sit in our balcony with my cup of tea. It is very calming to watch the early morning walkers and runners occasionally go by in the relative quietness of the dawn. And then, ever so often, a mail truck pulls up in the post office in front of our house and goes thru the exact same steps every day. It is fun to watch how the eighteen wheeler that shows up around 6:05 will go all around the parking lot after loading/unloading instead of exiting directly. And that is to give itself a lot of maneuvering space at the turn for exit.

On a Sunday like this, usually there is no activity in the post office. You can see many of the mail vans sitting idly in the lot. And that brings me to my question.

Check out the zoomed in picture of the vans. Do you notice how every single mail van has on the roof – what looks like a rusted out brown patch – on the right front (as you face the van)? The patterns are very similar too (the sizes vary a little). Now this being a mail van, this is the non-driver’s side.

For the life of me, I cannot surmise why does each and every mail van have that patch on the roof? Does anybody know? 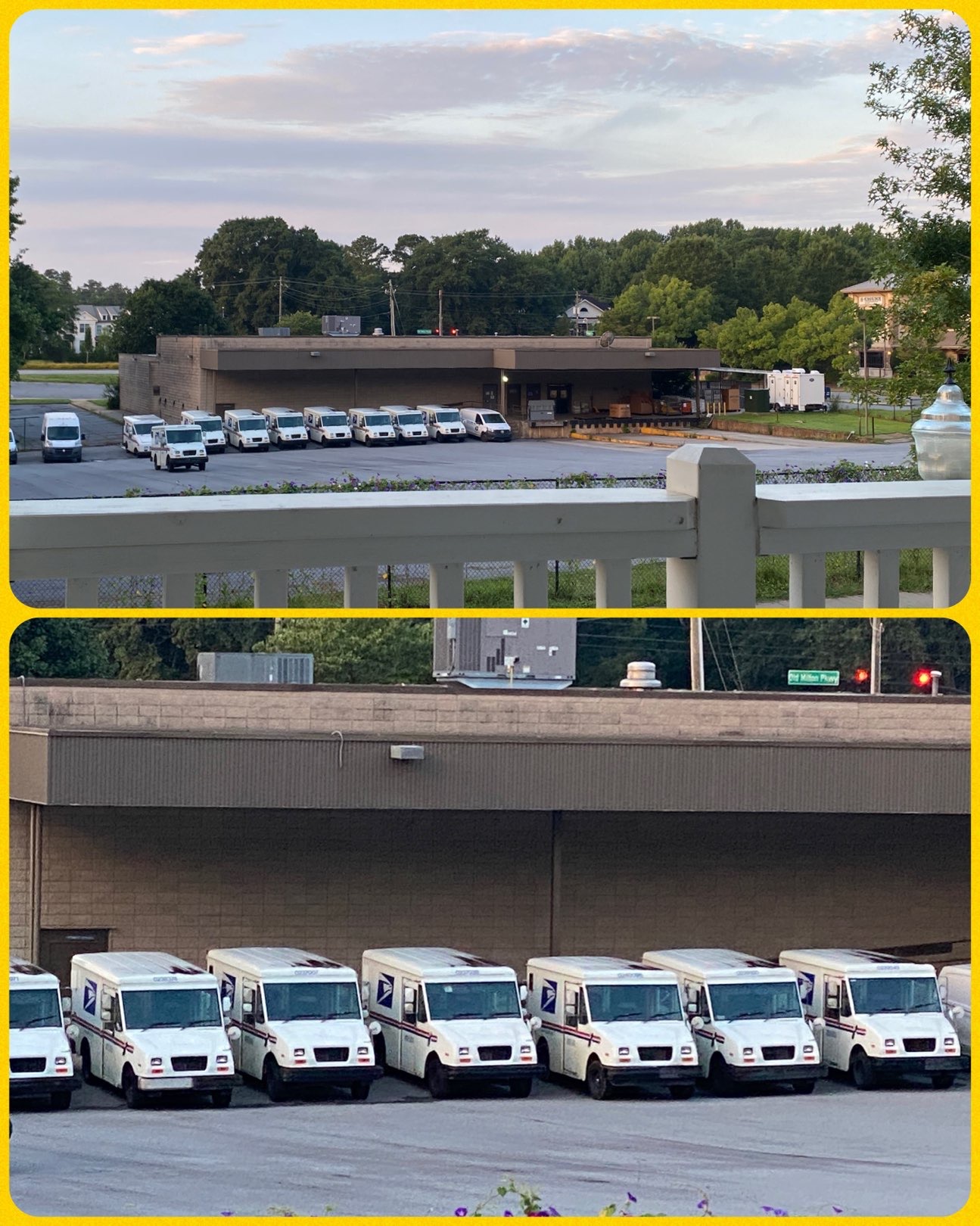 Can you explain this?

Every time I go out to boat, this sign as we enter the parking lot confuses me. Do you see the problem? I am coming along the road (which is one way anyways) and then I see this sign as I enter the lot. What is the big point putting a sign “Enter only” on my side? What else can I do?

I understand that sign being on the other side to warn anybody attempting to come the other way that you cannot exit there – it is an entrance only point. But why for me?

Never quite figured that one out. 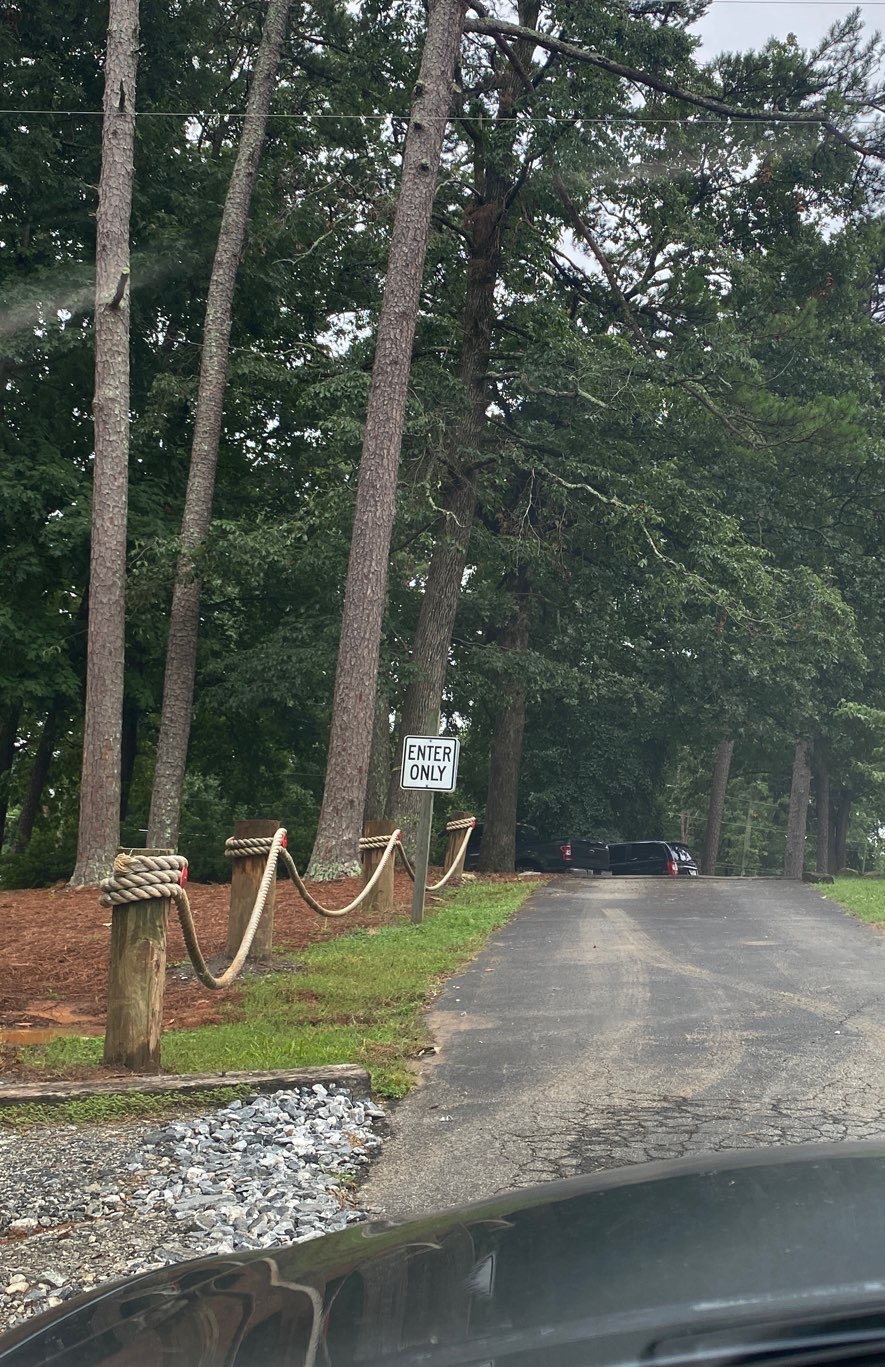 How do you explain this?

This morning, around quarter to ten, I was doing a quick check of the stock market when something caught my eye.

Note that the Dow graph shows that it has been going down since market opened. And yet, inexplicably, it was green in color. (should have been red). Even better, you can see that just above the graph, it shows that Dow has been up by over 300 points at that point of time.

I guess I should not complain as long as the market is doing well. But still, I can’t explain this.

Puzzle #2 (logic) from my India trip

There are 101 boxes. A girl marked them “1”, “2”, “3”…. all the way to “101”. She had two colored pens to mark the boxes with – red and blue. And she used both of them. Only one color was used for any one box. We know that the total number of blue boxes is the same as the highest numbered blue color marked box. And to that if you add twice the lowest numbered red color marked box, you will get the total number of boxes.

The question is, how many blue and red boxes were there?

Category: Puzzles | 2 Comments on Puzzle #2 (logic) from my India trip

Puzzle #1 (math) from my India trip

This was given to me by my elder nephew. I was able to solve it but in the process I learnt a new concept in numbers called partition number. My nephew taught me a method of how to get to the partition number for a number. He claimed it is called the Chinese method.

Here is the puzzle:

In the following expression, once expanded, what is the coefficient of x9 ?

What do you think is happening here?

If anybody is not familiar with interstate highway I-16 in Georgia, it connects Savannah to Macon and pretty much goes like a straight line east-west. There are virtually no towns or cities in between. As a result the 120 mile or so highway has a consistent speed limit of 70 mph.

Sharmila and I were coming back from Hilton Head on this highway. Somewhere in that highway, I noticed something interesting. The display on the rental car dashboard informed me that the speed limit was 40 mph. (see the top middle portion of the picture) I was not in a construction zone and the highway was totally clear.

It took me some time and experimentation to understand what was going on.

Can you guess why the car was giving me completely wrong info (suggesting 40mph in a clearly 70mph stretch)?

If you want a slight hint, check out the other displays on the dashboard in the picture. 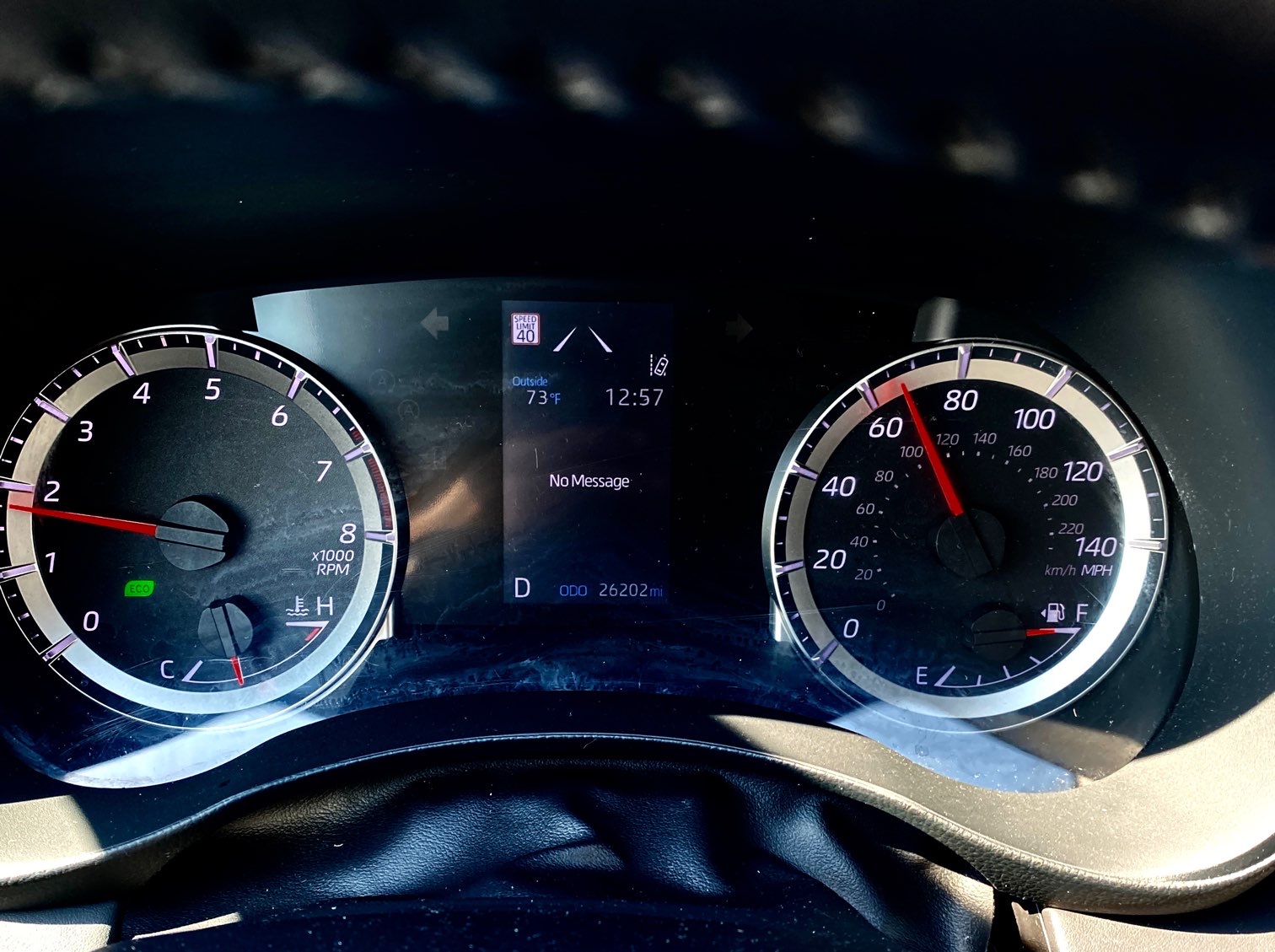 Category: Puzzles | 1 Comment on What do you think is happening here?

Can you name most of them? 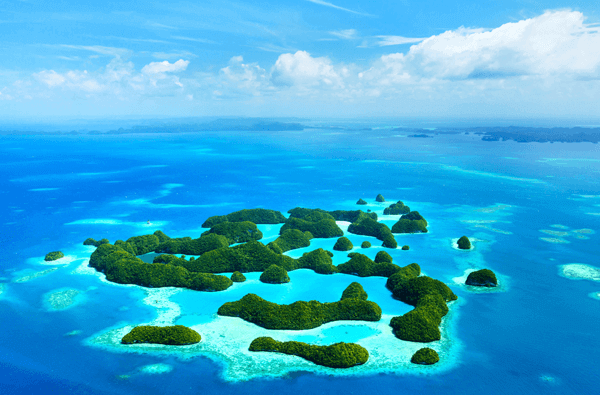 Here is another problem to be solved

Now that we have solved the temperature problem in Chicago, here is another one from San Francisco.

[Errata: Looks like I have completely forgotten my physics – Sound is longitudinal and light is transversal – it is about which way the wave is moving and the particles in the wave are moving.

However, my original question remains – although I cannot remember the terms now – a ray of light goes straight but sound disperses in all directions – like the pool analogy. So, how does this work?]

Last week, I was in San Francisco and as his is wont, Matt Moore invited me to go for a walk with him by the waterfront and discuss business issues. While walking around Pier 15 enjoying some nice coffee, he showed me something. It is basically a set of two parabolic metals facing each other about 50 yards away. Each has a small stool to sit on. Matt asked me to go sit on one and he sat on another. As you can see in the picture.

Some of you might have guessed this, I could distinctly and loudly hear what he was saying. It felt like he was just six inches behind my head and he was talking to me from there with a slightly louder than usual voice of his.

For the next few minutes, I showed off my Physics to Matt by eloquently explaining how we were sitting in the focal points of the parabolas and how his voice was hitting his parabola, going then in a straight line to my parabola (geometric property of parabola if you remember) and then my parabola was putting all that on to its focal point which is where I was sitting. You would have seen the same in microwave towers, large telescopes etc. I do not know what Matt thought but I thought I did a good job.

Two days later, I realized what an idiot I was. I was telling Sharmila about it and then half way thru, I stopped cold. I realized that everything I said to Matt was correct but only for longitudinal waves – you know like microwaves, light etc. But sound is a transversal wave. It spreads out in concentric circles (like if you throw a stone in still pool). Those sound waves from Matt would have emanated as concentric circles and then after some of them hit the metal parabola, they would start out as more concentric circles from the point of incidence (where it hit the metal). Then where is the question of focus and all that in an ellipse?

But I experienced it myself.

How do you explain that? 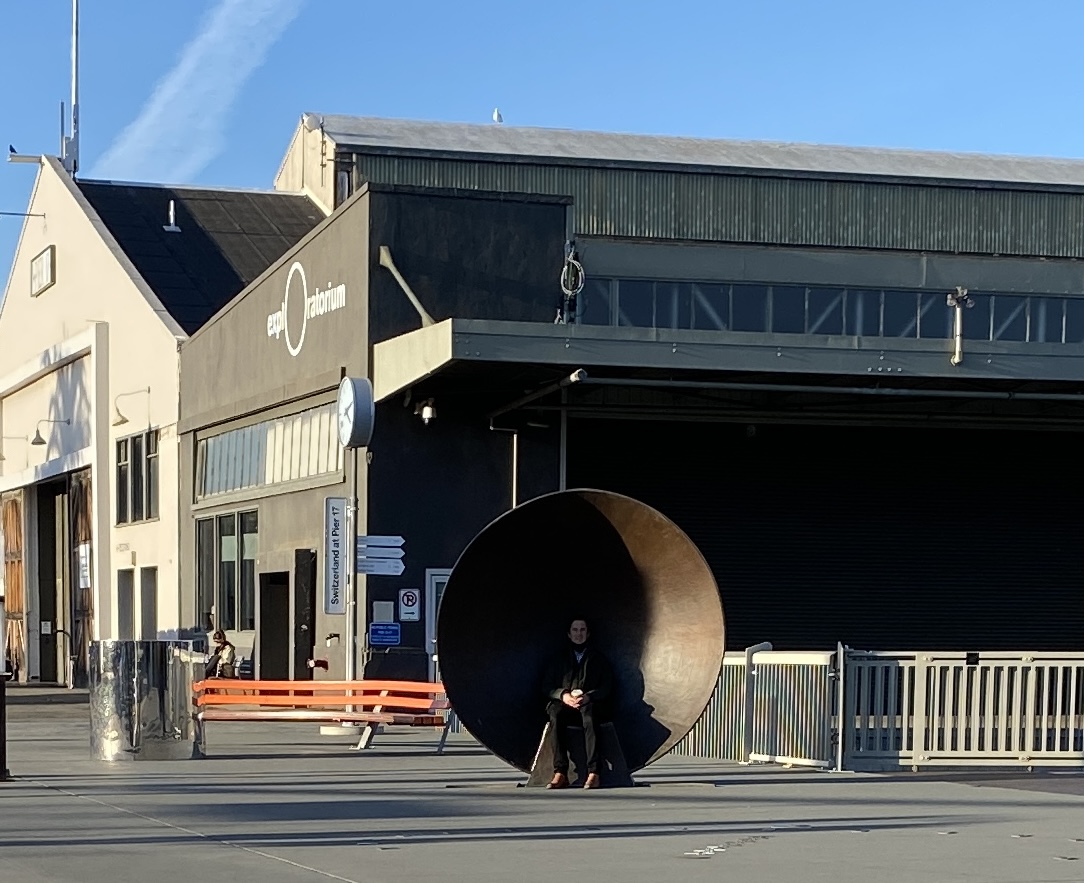 Category: Puzzles, Travelogs | 1 Comment on Here is another problem to be solved

How do you explain this?

It is bone chilling -8F (-22C) right now here in Itasca. But it will slowly warm up as the sun comes up. That part I get. But look what happens after the sun sets. The temperatures keep rising thru the night. Of course, there is no sun around. Lake Michigan water cannot be that warm – after the last few cold days – to explain that.

How do you explain that? 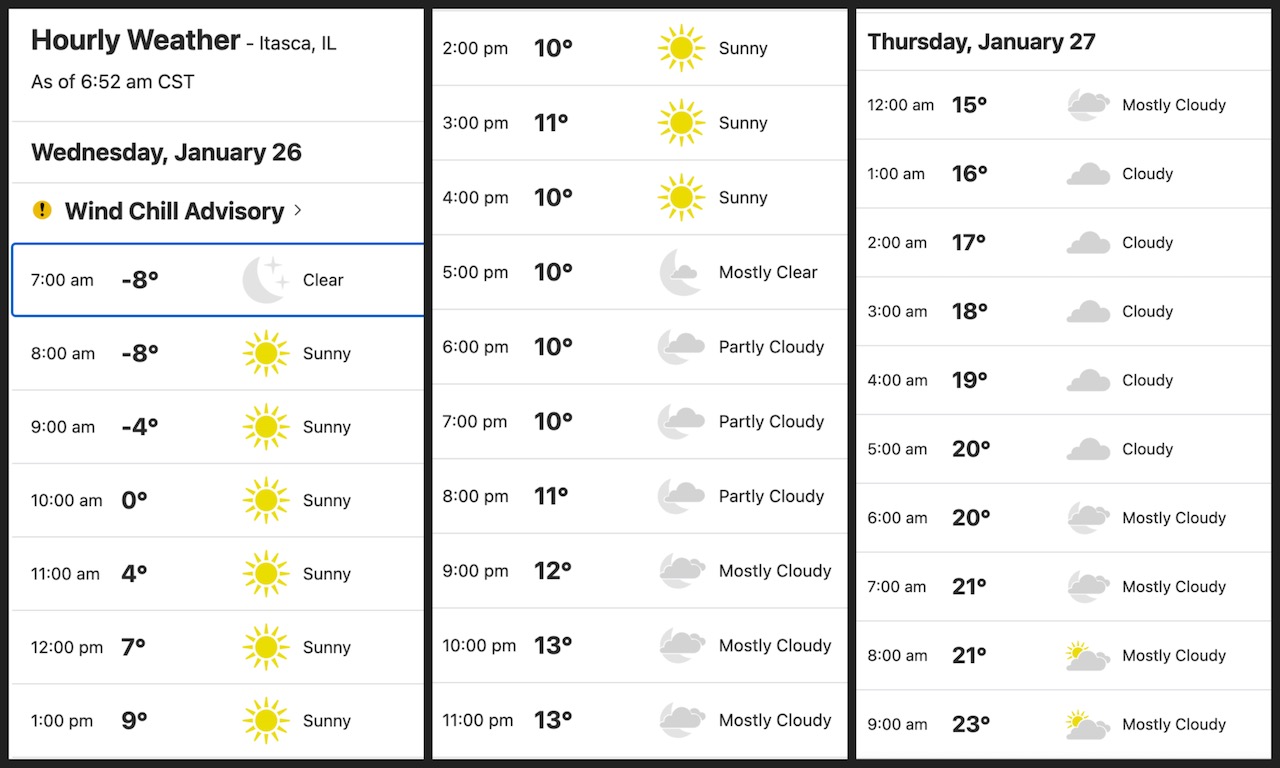 Category: Puzzles, Travelogs | 1 Comment on How do you explain this?