Some of you may know that professionally, I work in a company that assesses students (and younger kids) from their achievement levels to abilities to special needs and all that. In our all company call over Zoom, this time the topic was the “life of a typical user” – a teacher – and how would they use our product. Specifically, how would they interpret the scores. The idea of the organizers was to ensure everybody in the company understood what it took to walk in the shoes of a user.

It was extremely well done.

Towards the end, there was an exercise. The audience was divided into small groups and they had to discuss and interpret the score results. The 11 students they had “chosen” were uncannily the Top 10 leaders in the company and yours truly.

And in the made up reports (I insist, made up), apparently, I scored 13 in Social Studies!!

Each group were to discuss about how they interpreted the results and what actions they would take on their assigned student.

I know my business card demands that I maintain certain level of gravitas and all that in all company meetings. However, truth be told, I was rolling on the floor on live video!!

How Not To Present Yourself

I seem to attract more than my fair share of LinkedIn requests from folks who describe themselves as “visionary”. I wonder if one were to do reference calls on them, how many would use that word to describe them.

Where did the bear go this time?

Kids have been coming back to school and teachers are scrambling to get data on their learning and growth in these crazy times we have gone thru. This means, on one hand, our business has gone thru the roof. On the other, we are working incredible hours to give the customers the support that they need and deserve.

Did you know that Riverside Insights is hiring 100 people to support teachers, school psychologists and school district admins help elevate the potential of school kids? Ask Tyler Morrison, Ashli Florek, James Duval, Lela Day or anybody in Riverside Insights if you wanted to know more.

I walked into office straight from the airport yesterday. After realizing that the bear was not at my desk to harass me, I got naturally curious about what he was up to.

Walked around a little more… and found him here!! The poor guy had heard about the long hours of our Customer Ops folks and decided to answer the phones to help out…

Maybe I was a little hard on him on his annual performance!

Give it up for our Customer Ops team and The Bear !!

He got too busy for me

This week, I am back in our Chicago office again! Was wondering what the Big Bear was going to be up to this week.

Surprisingly, did not find him at the front desk or at my desk. Went around snooping to look for him. Found him in a conference room talking to a customer!!

Came back to my desk quietly so he would not notice me and start following me again! 🙂 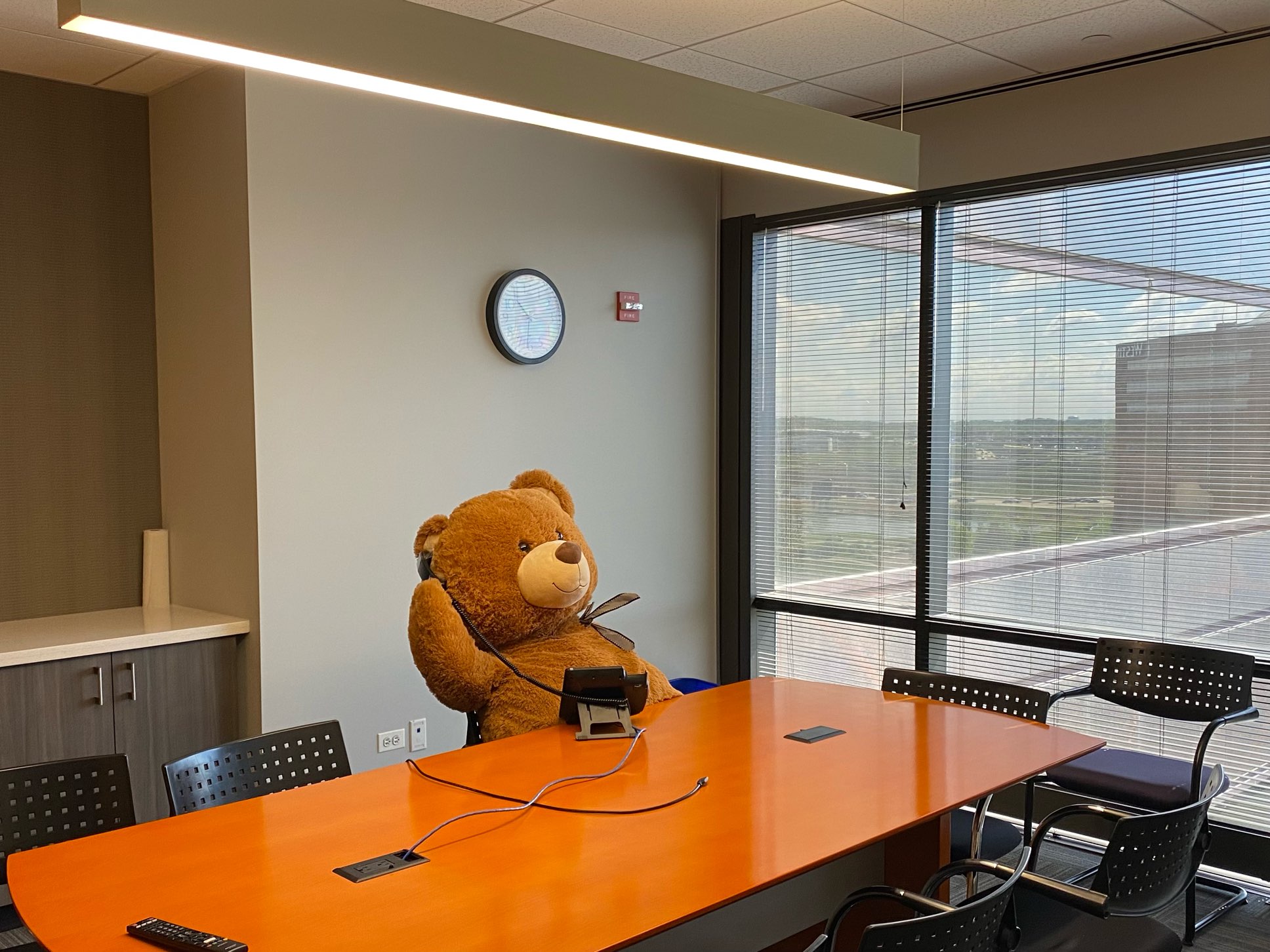 It is those smiles!!

One more thing that I am going to miss if everybody starts to work from home – those impromptu getting togethers around a cubicle. Sometimes to brainstorm, sometimes to just have a good laugh! You know… those small things… that build culture and kindred spirit.

Our vaccinated teammates are taking advantage of the flexibility at work – some come to the office everyday to keep a clean separation of work from life and some come on specific days or for specific team meetings to be able to balance the needs at home and work.

Personally, I have started flying to Chicago every other week. Mostly to drop into these impromptu meetings to crack some completely unnecessary and irrelevant jokes!!

But watching people who I work with smile at work? Priceless!! 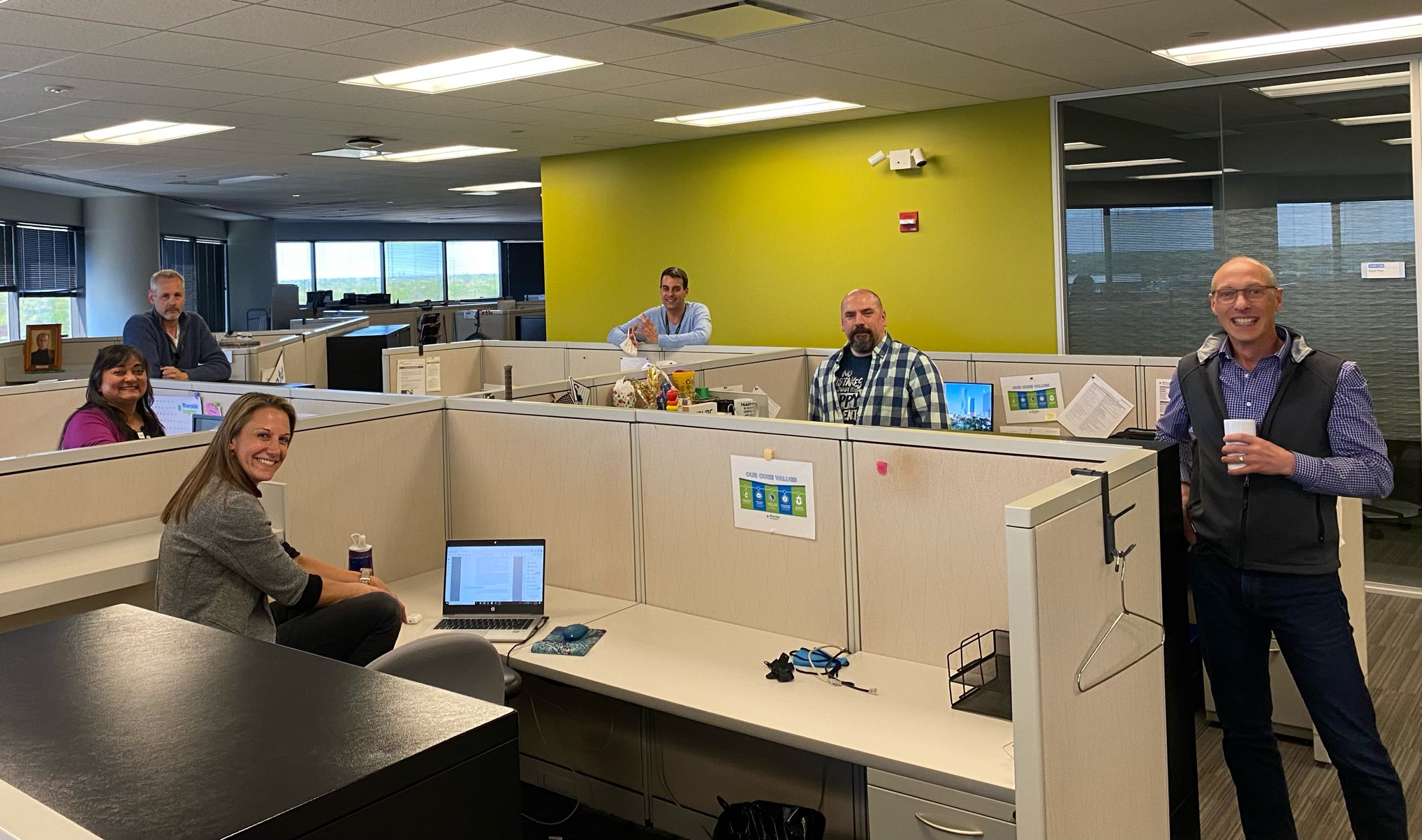 Got caught sneaking in…

Went back to Chicago after a week to work from office. Was wondering if the bear had gotten over the performance appraisal and moved out of my cubicle.

He was sitting right at the entrance of our office floor with that “And where were you last week?” look on his face!

I tried my best to ignore him and slinked my way to the cubicle!! 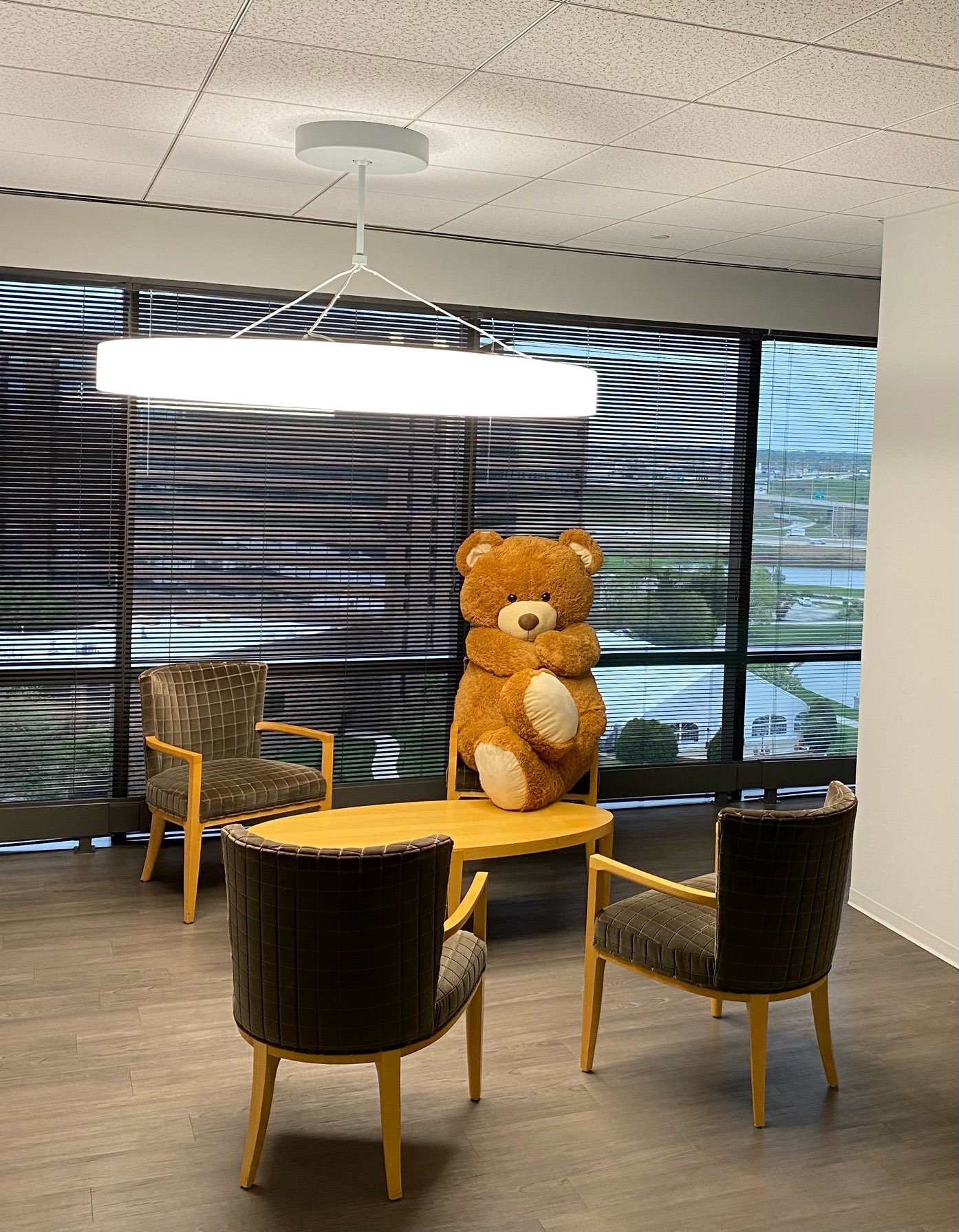 Came to office in Chicago this week. Walked into my cubicle and was immediately met with a good humored prank from a colleague. (The needle of suspicion points to Chris or Deval 🙂 ).

Loved it. Does the bear not look like somebody who is not happy with our recently concluded annual appraisal? 🙂

This is the kind of fun I am going to miss if everybody starts working from home forever.

Recently, in a CEO forum, I saw something that resonated strongly with me. The CEO’s quote was:

“What is the human side of work? How do you maintain a culture? That’s what we want. The Number One source of happiness in this world is having a good job, working with good people, doing good work that you enjoy. Is that going to mean sitting at your computer in the bedroom with your cat jumping on you?” 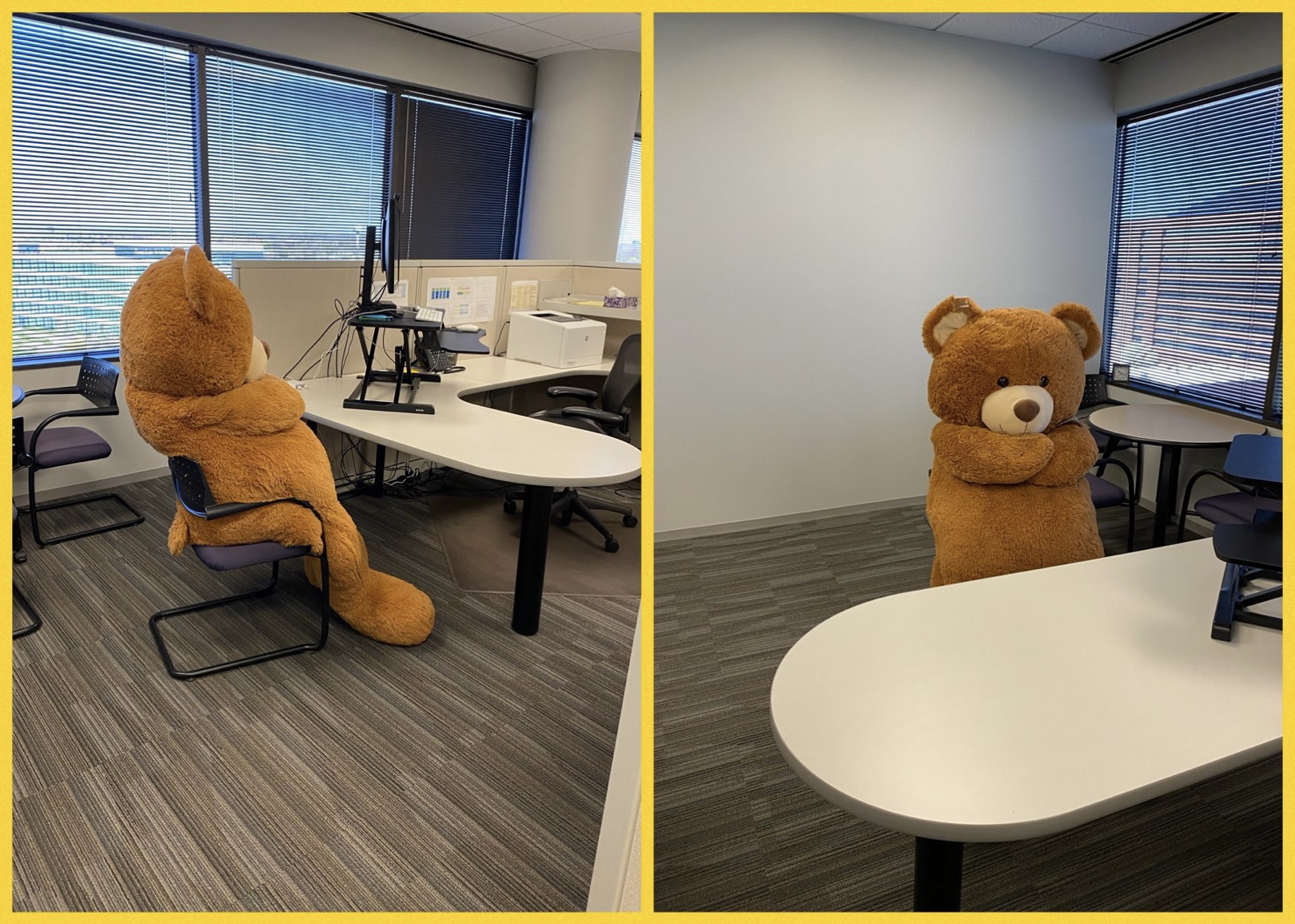 Category: Reflections | 1 Comment on This is what I am going to miss if we all start working from home forever

How do you think about anonymous forums for employees to talk to CEO?

I have been going thru one more of those situations where something I deeply believed in has been brought to question. Would be interested how you would think about this – regardless of which side of the table you are in.

We even fashionably call it “Wireside Chat”. My belief has been that by doing this, I was sending strong signals to the company that we want to create an environment where people could speak their mind even if that meant they were uncomfortable doing so publicly.

In the very first company I did this, I have to admit the questions took me by surprise. Anybody listening in would think we had a bunch of inconsiderate folks working in the team. In fact, one of questions I still remember is “Why does ABC (one of my direct reports) have a job?”. Questions were incredibly personal and seemingly pointless.

While I did my best to answer those questions, I realized how much of a culture and chemistry issue I had inherited in my new job. In any case, three years later, the questions had become almost always very business and market oriented. It almost felt silly to use an anonymous platform for those questions.

In subsequent jobs, my starting points were a little better but I kept up with the practice.

Recently, in a CEO forum, a peer CEO made, what I thought was, an excellent comment: “We will not have any anonymous platforms. If you feel uncomfortable with your manager or his/her manager, come and talk to me. I will give time to any employee if they want my time”.

After a 20 minute discussion, I understood how she was thinking. From her point of view, she does not want to give employees a curtain to hide behind. She even mentioned how this is equivalent to internet trolling. As long as she has kept her door open, she feels she has done the right thing. Beyond that, the employee needs to come out and speak his/her mind from a position of conviction. Of course, confidentiality of the conversation is totally assumed.

She reported that this has led her to have very enriching give and take (which I could not do in my Wireside chats – it was “ask a question, get an answer”) and also gave her a chance to mentor some employees.

I totally see merit in her argument.

But I also am worried that not everybody might have the comfort level to talk to the CEO. And that anonymity – at least to begin with – matters.

What do you think I should do?

1
Category: Reflections | 16 Comments on How do you think about anonymous forums for employees to talk to CEO?

Have you ever experienced this?

I was trying to think thru in my mind – what does 4,000 people mean? I remember attending events in the past in a very successful company where more people would show up to hear folks from the company speak.

But then, I realized something. Riverside Insights is only 250 people strong. That would imply that for every 1 employee, 16 people came to listen to what Beth and Joe had to say about the work they do.

Never, ever experienced something like this. Not even close.

One of these days I am determined to find out why is that what those 250 employees in Riverside Insights folks do or how Beth and Joe explains what they do – so important to the world.

Till then, I am going to marvel at them!

A man is known by the company he keeps

I am not terribly sure how I manage to get into these situations – certainly level of IQ does not explain it – but recently I found myself in a great discussion on COVID and COVID expansion with a few luminaries. It was hosted by University of Virginia professor Dr. Madhav Marathe (under normal circumstances, I would kick that Dr. part – since he and I were college mates in Computer Science in IIT-M). The other luminary was Kiran Vaya – retired telecom executive from Motorola.

And then there was myself, trying to figure out how to spell “C-O-V-I-D”.

I have to say, I am amazed by how Madhav and Kiran were quickly able to draw the parallels between the spread of the virus and how cell packets are distributed thru the cellphone network. For whatever I remembered of Computer Science, that made amazing sense to me.

But what blew me away was Madhav (or should I say Dr. Marathe)’s explanation of why academia holds back from forecasting often. It is what he referred to as variables that are “endogenous” to the system.

If you did not get it in the first blush, count me in.

Here he what he explained lucidly to the audience…

Think of weather forecasting versus pandemic forecasting. Regardless of what the meteorologist forecasts, the weather is going to turn out exactly to be the same.

How do you forecast?

One thing I have learnt about great education. It is all about asking the right questions. Not necessarily having all the right answers.

Thank you Madhav and Kiran, I think I left the forum with a lot more questions than I had answers.

And that is the way it should be. 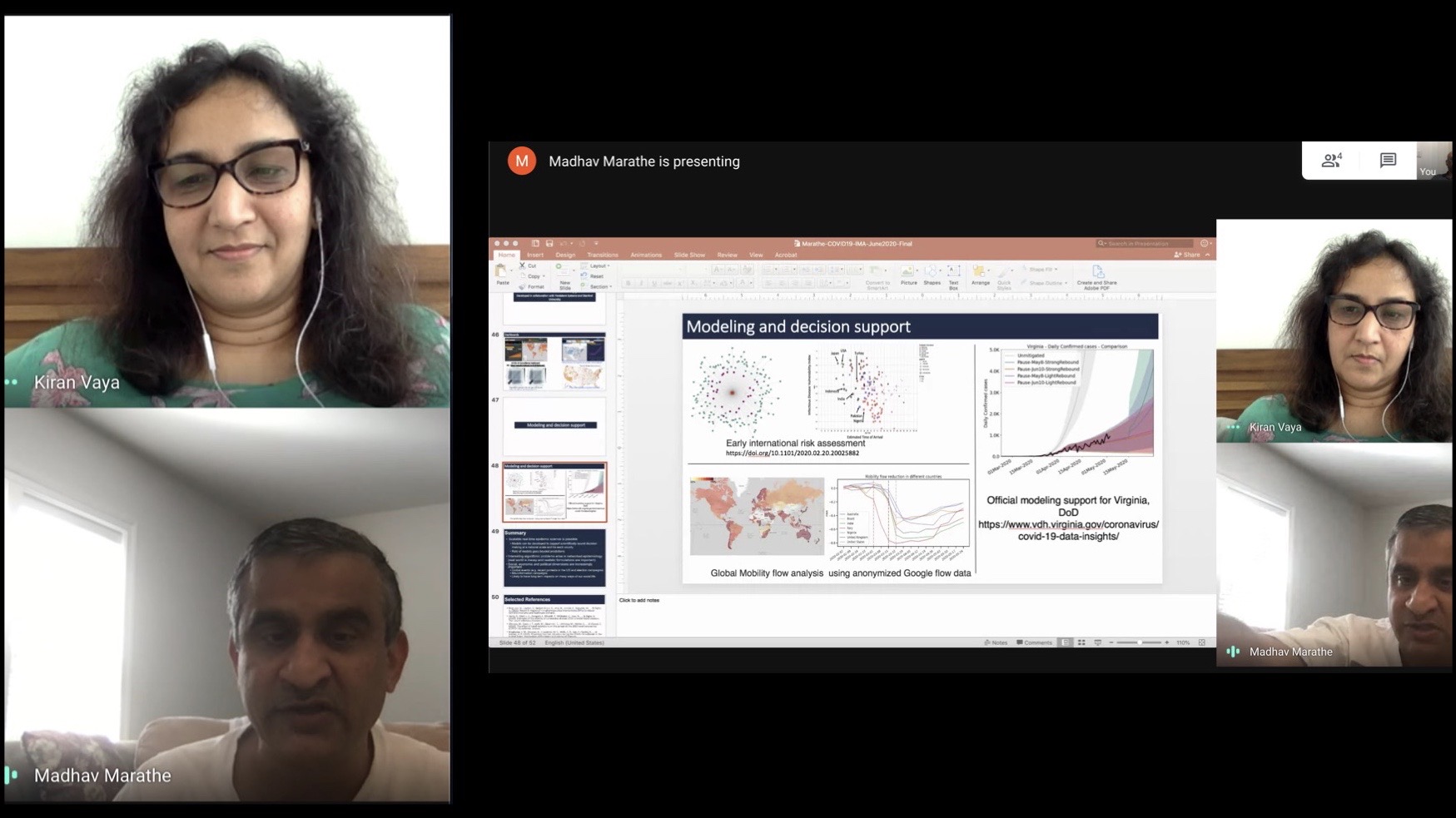 Category: Reflections | 1 Comment on A man is known by the company he keeps