Great evening out with Antara and family

Best part of the evening was 4-year old Chiku. He could spell tough, long words – mostly dinosaur related – better than I could!! 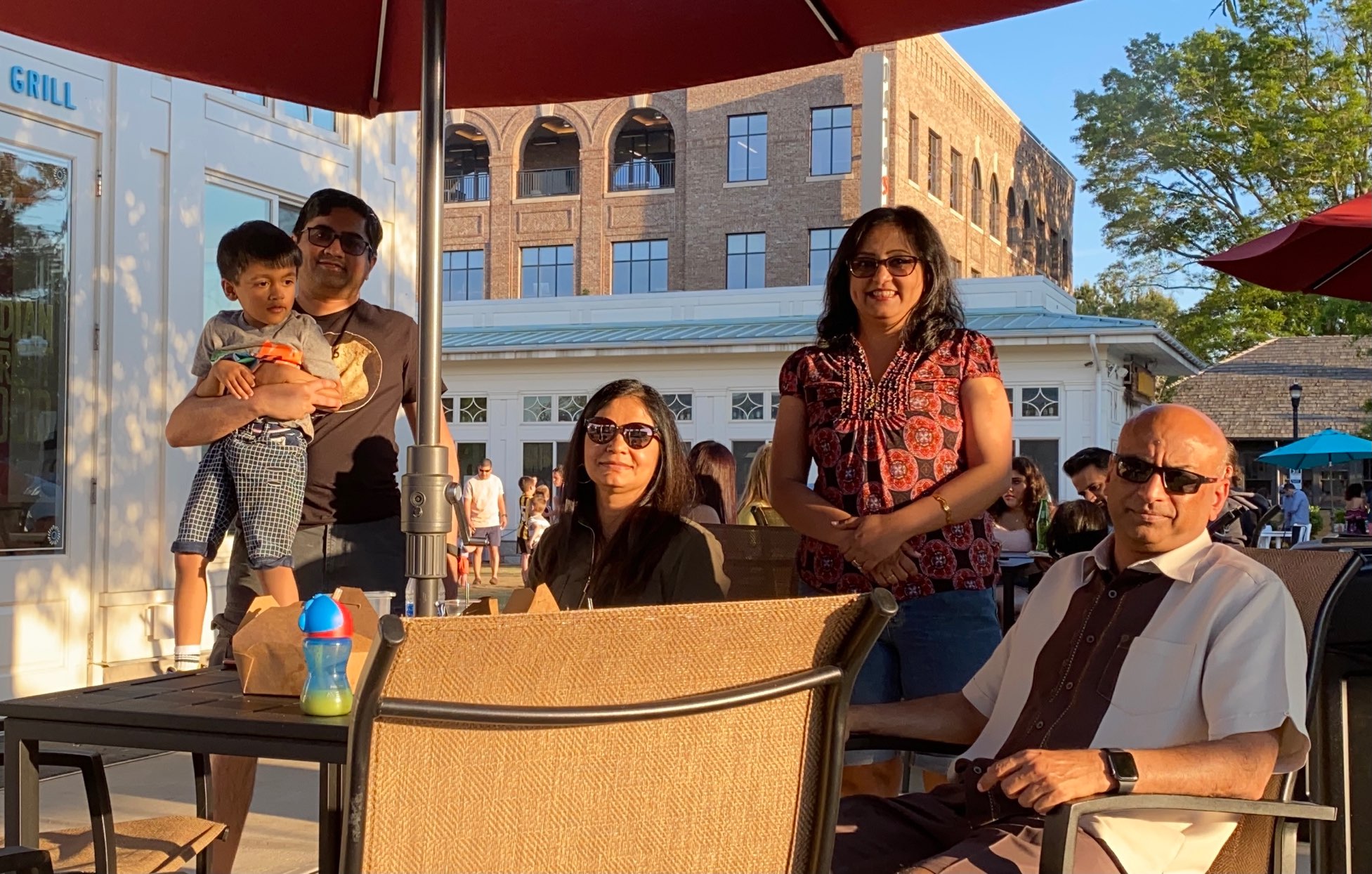 Finally, got the clearance!!

The good news is that after fourteen months, I got the message that I am finally cleared to go back to hospices to spend time with people who are in the last stages of their lives. Need to still get the painful subcutaneous Mantoux test done (to test against TB), but right now I have been assigned two young ladies (both 87) pining away their last days in two different hospices. And I have a brand new mask to show off too!!

The bad news is of course, none of my old friends that I got abruptly sundered from are there any more. In fact, most passed away without even being able to see their loved ones at the height of the pandemic. 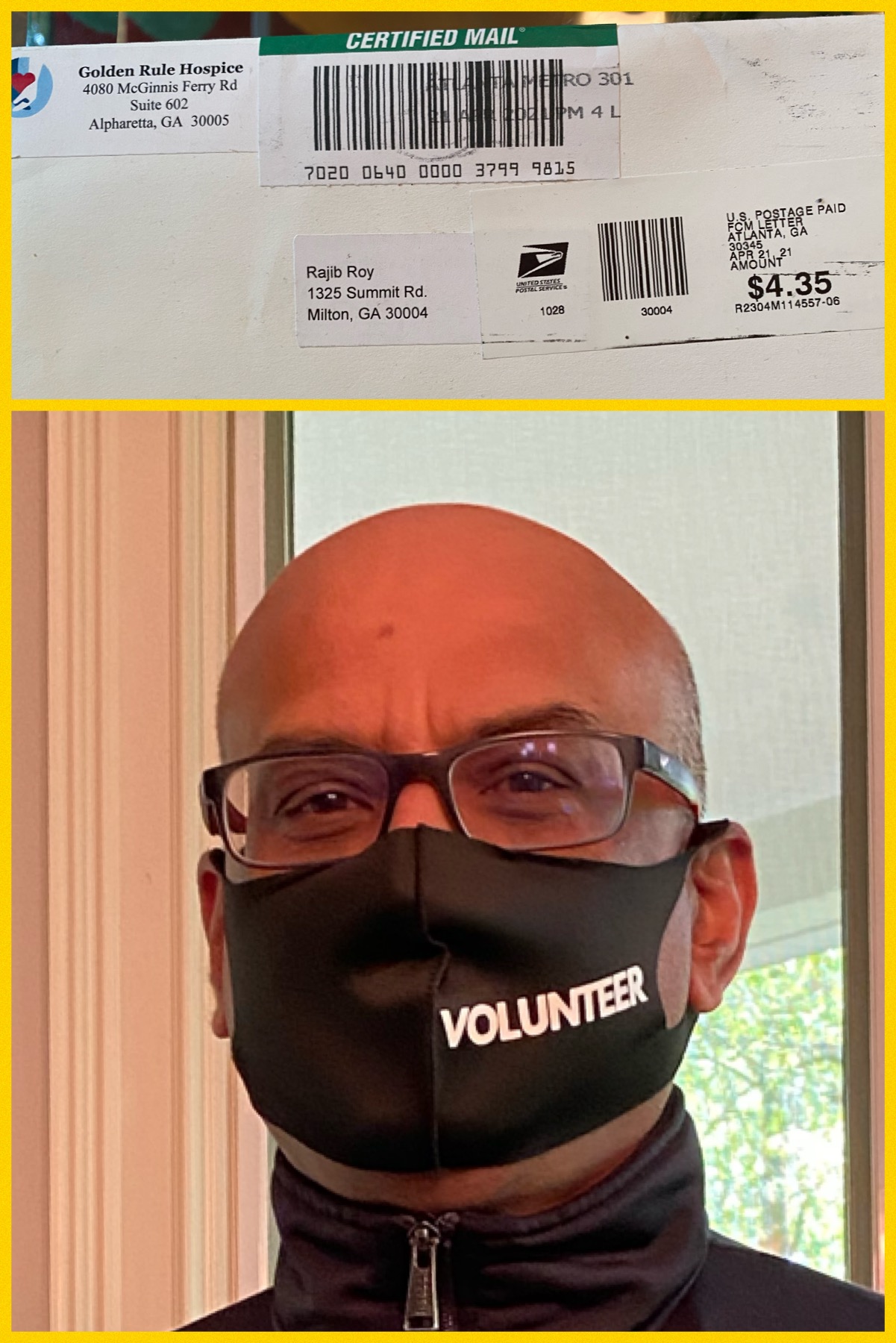 There is only so much of Nazrulgeeti a dog can take!!

The effect of a couple of hours of Bengali songs was rather pronounced on Jay Jay!! 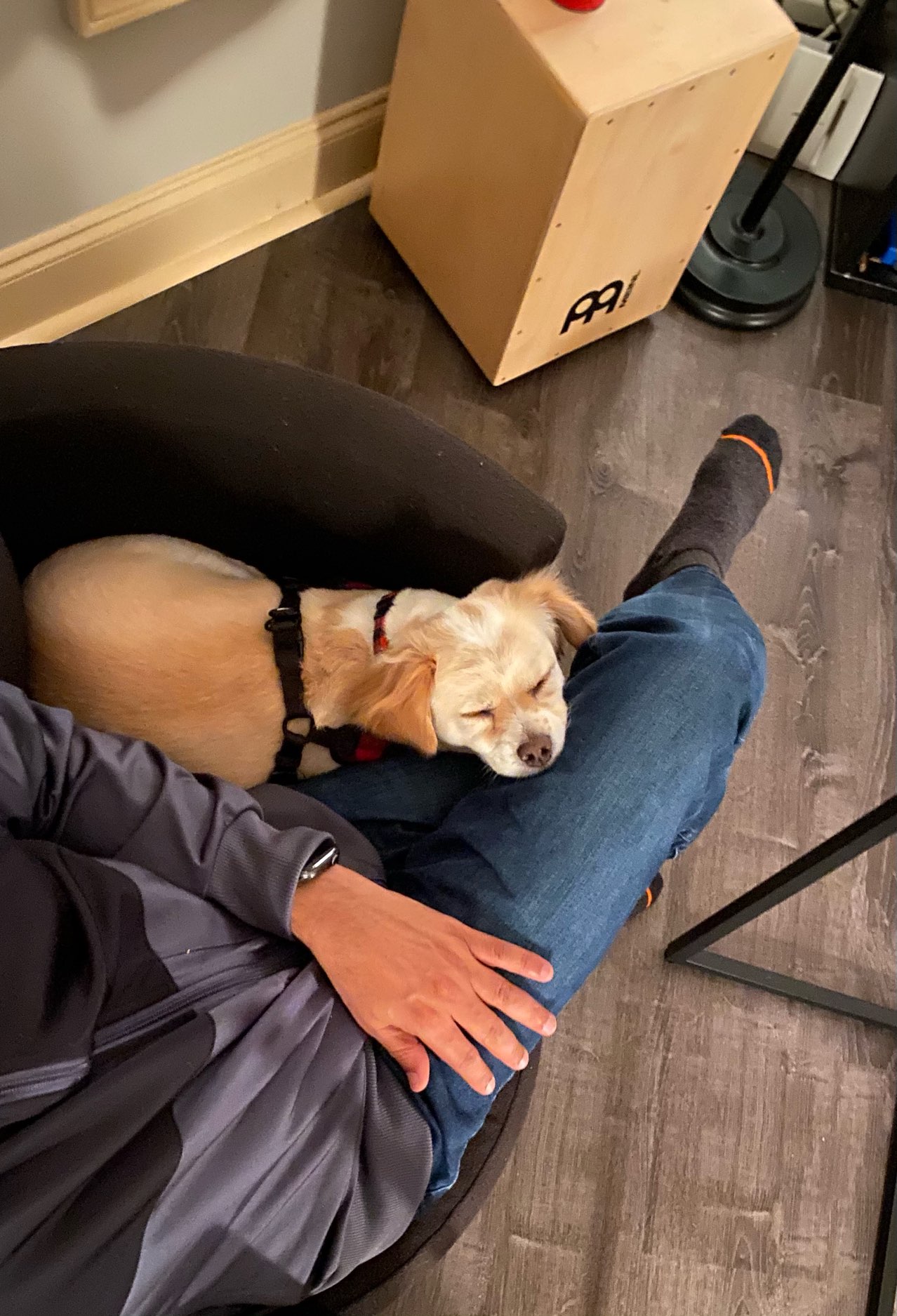 Great evening with the Talukders

Met Shantanu and Mrinmoyee after nearly 4 years!! A lot to catch up on! Also tried Hobnob upstairs in Halcyon. A very nice environment… 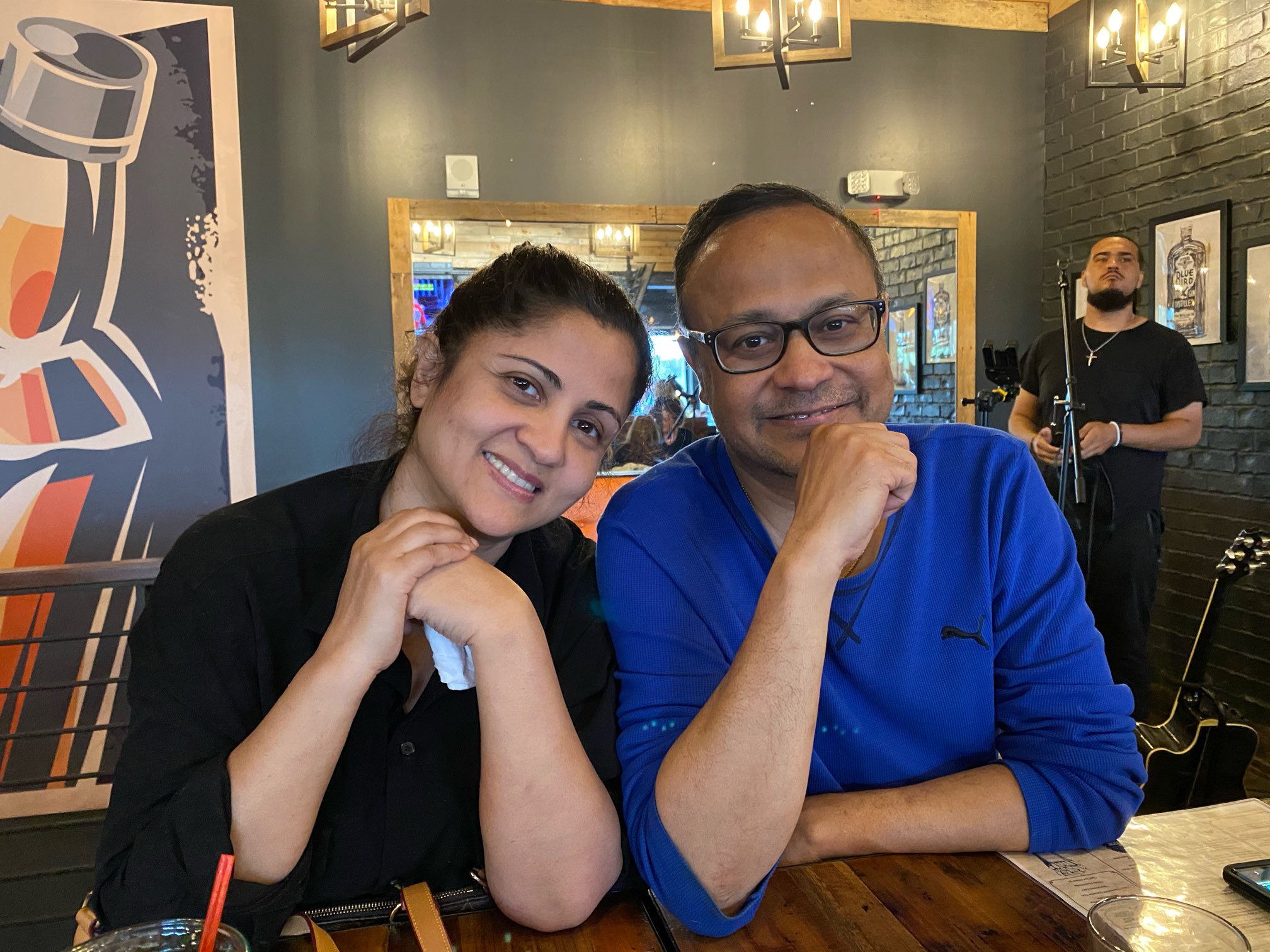 This story is rather embarrassing for me. I was too young to remember this. But my dad often told this story to razz me. And it usually worked.

So, this goes back – way, way too many years… 51 to be precise. Now to fully get the story, I have to give a little background here.

Back in India, all my life I grew up having my meals while squatting on the floor. In fact, even in Kalyani, when I would be with my parents – including my last meal with them – we would all sit down on the floor and eat.

The next thing you might want to know is that when we were growing up, we were sufficiently modest in our income that a square meal meant rice, lentils – called “daal” – and some vegetables. On a couple of days in the week, we had fish and then we had some special Sundays when we would have meat (always goat meat those days).

So, now, to hear my dad’s version… Apparently, we had finished lunch one day. And by “we”, I mean my parents, my sister and myself. My brother was not yet around. Mom had cleaned up the floor with a wet cloth (“nyata”, as we referred to it). Apparently, she missed a particular piece of lentil that had flung afar. That piece of lentil, over a couple of hours, had turned from a juicy bit to a hard and dried morsel well stuck to the floor.

My sister, ostensibly crawling around without any rhyme or reason, had spotted that hapless bit of lentil. And as every kid of that age does, she promptly decided that the lentil needed to be transferred from the floor to her mouth.

Like those best laid plans of mice and men, she was completely stopped in her tracks by that rather stubborn (“thhnyata”, as we would say) piece of lentil. It simply refused to budge. After giving it a few heave ho-s with her tender fingers, she decided to call in for reinforcements. In this case, her reinforcement refers to yours truly.

Like a knight in a shining armor, I appeared on the scene. After carefully evaluating the scenario, I apparently also proceeded to dig with my fingers. Except that my fingers were not that tender. At least not as hers. A few determined attempts and I succeeded in uprooting it!! The “daal” (lentil piece) was in my hand. I have no doubt that I was as proud as proud could be.

And this is where the story gets a little murky and somewhat anti-climactic. In an alternate universe, I handed over the dirty lentil to my sister who put it in her mouth and savored it as she dotingly looked up to her brother shimmying out of the scene.

In this real universe however, that knight in shining armor decided that since he took all the pains, he should get all the gains. And promptly put the dirty lentil in his mouth!!

In this universe, my sister bawled a lot, my father told me!! 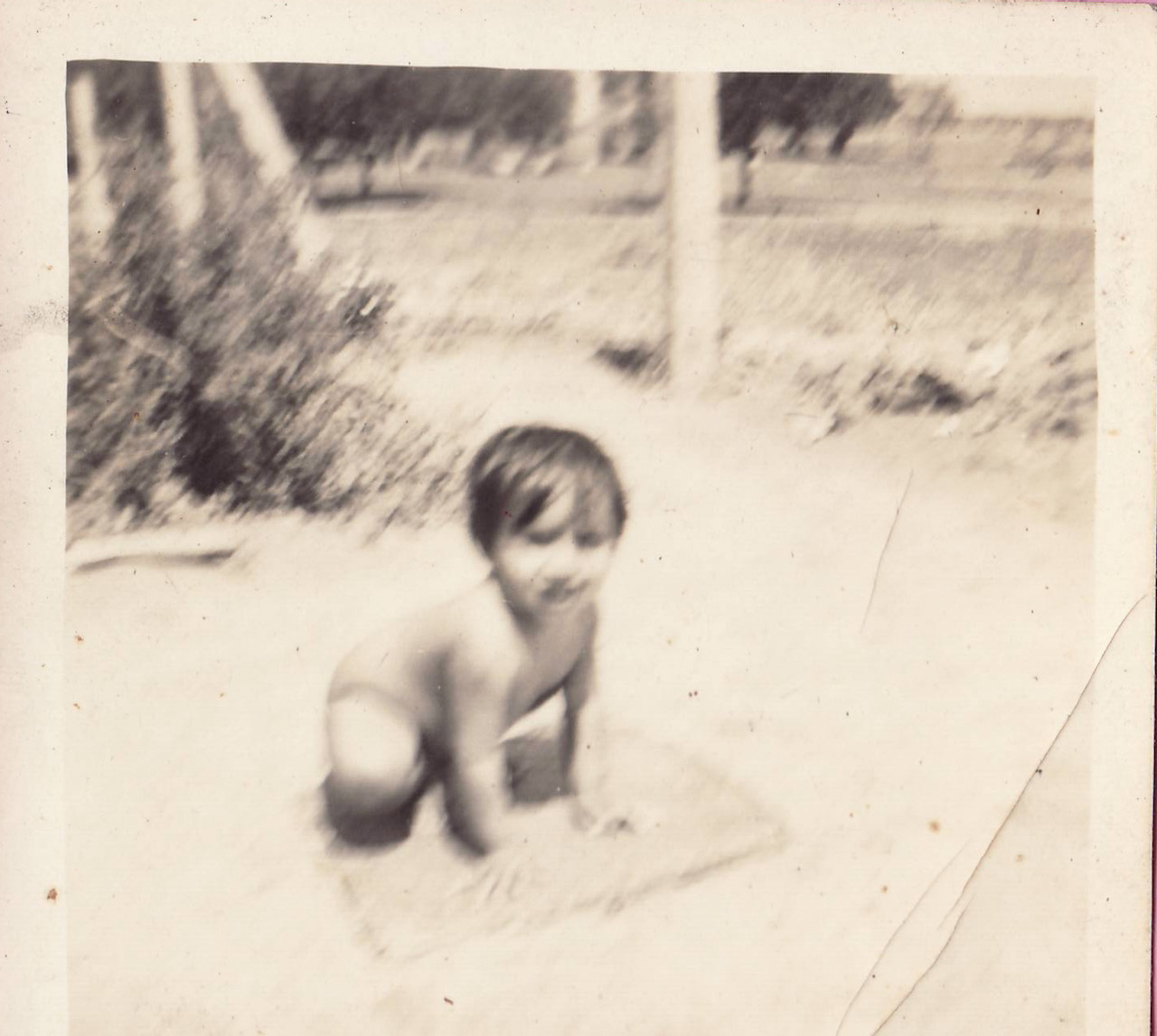 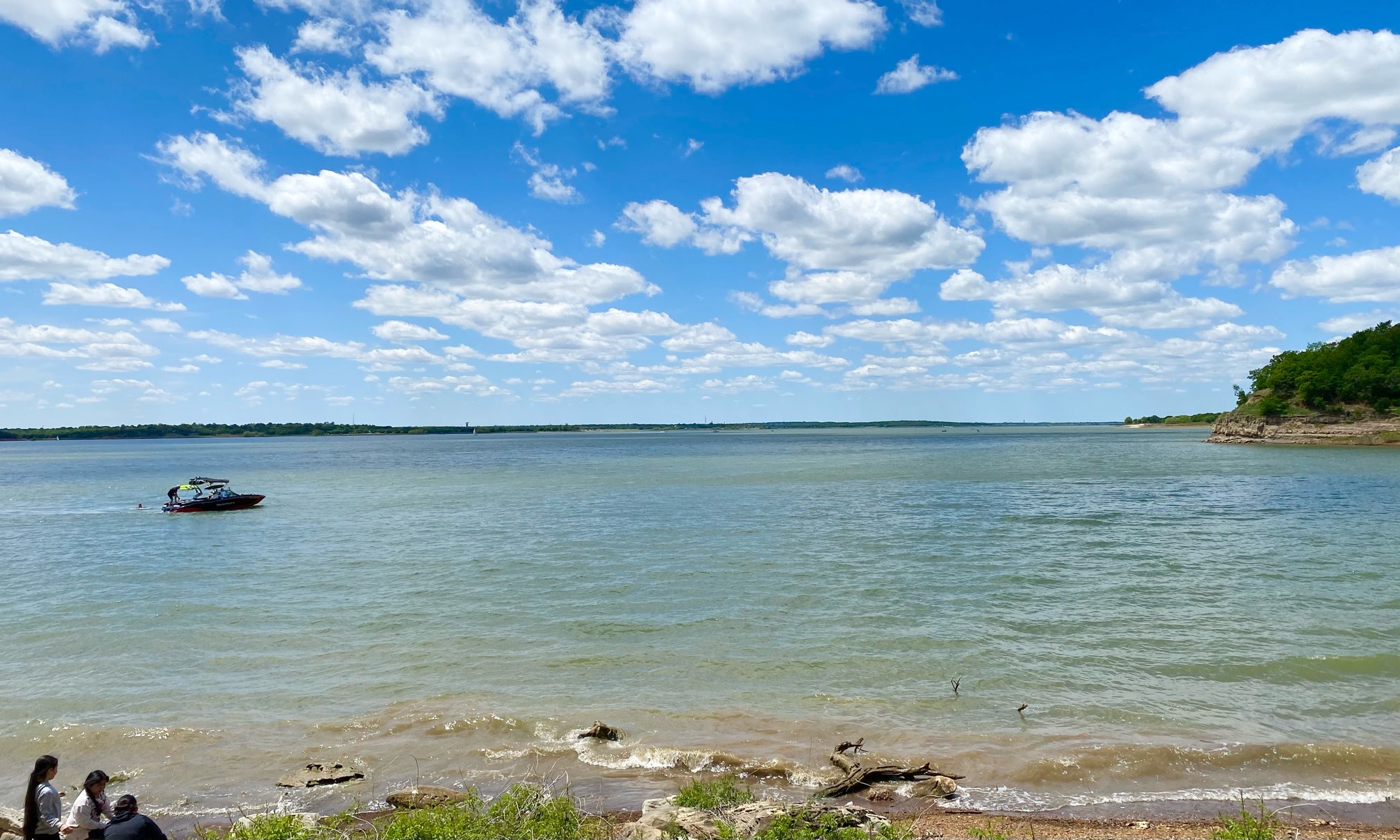 A quick Sunday trip to see the Roys of Dallas 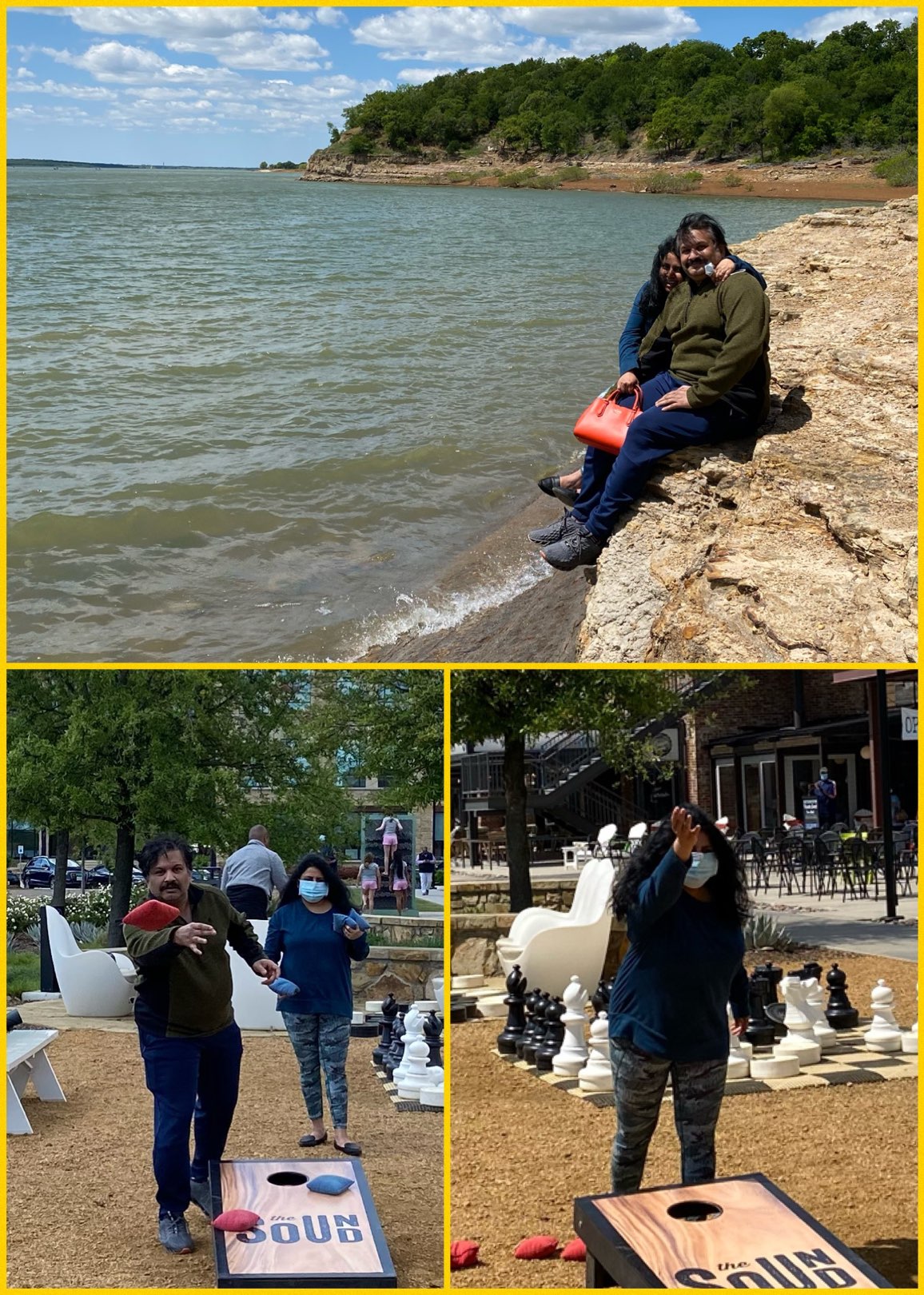 Have you ever heard the story of a kidnapping victim?

“Sir, you probably realized this – I am a very shy guy. I cannot talk to people much. I can’t believe you spent one and a half hours listening to me.”
“Vivek, I am going to take that as a compliment of the highest sort”, I replied.

Frankly, I had not realized that it was one and a half hours already. And it was barely 4:30 am in the morning!!

I had gone to sleep at around 10 pm in the ITC hotel in Durgapur. The jet lag was writ large over me when I woke up at 2:30 and could not go back to sleep. Instead of disturbing my brother who was fast asleep, I simply grabbed my laptop, iPad, phone and headed downstairs to the lobby. The idea was to try and catch up on some posting of blogs.

The lobby was fairly dark and warm. I guess the lights and the air condition had been turned down. There was this one thin lanky guy at the counter who was poring over his phone. Not ever shy of chatting up strangers, I went ahead and talked to the young gentleman. Vivek Thakur, he said was his name.

But it was clear that he was not comfortable talking. I was equally determined to get to know him. And I am so glad that I prevailed.

By all accounts, Vivek is a rising young gentleman. But somebody who has faced a few challenges in life. Not the least of it was that he was once kidnapped by gangsters.

“You mean, you were actually abducted?”
“Yes, sir!”
“Why?”
“For money, I guess.”
“Are you comfortable talking about it?”
“Sure. You can google it up too”
Which I did. Here is a newspaper report from that day…

He took me through some scary details of how a car came and hit him on his bike gently enough to throw him out in a dark evening. And then how he was roughed up into a car where there were a few other miscreants. He was made unconscious with some chemicals.

Apparently, the cops on the highway smelt a rat with the vehicle and asked it to stop. When it did not, they gave a chase. After a few miles, in a construction zone, the driver lost control and the car tumbled over. The miscreants high tailed it and fortunately Vivek was rescued – badly shaken up.

As you can imagine – my jaw dropped as I heard the story.

If that was not enough, found out that his best friend – who was an amazing artist and musician (in fact, he took me thru some of his work) had committed suicide the previous year. Apparently that also came in the local newspaper.

He also talked about how when his dad moved the family to Durgapur, it was a very rough transition for him.

By this time, for a very shy guy, he was certainly talking his mind – although haltingly (almost like he was thinking and weighing in before saying anything). We talked a lot about his aspirations. He loves the service industry. Someday he want to open his own business – perhaps a hotel.

“Vivek, you have a fascinating story. Can I write about you in my blog?”
“You have a blog, sir?”
“Yes, www.rajibroy.com. You will see stories of many people like you that I meet on the road”.
“Sure!”
“Let’s take a picture together. I will feature it in the post”.

And we left as he mentioned about how he could not believe that we had been talking for one and a half hours.

The following day, before checking out, I saw him for another few minutes…
“Sir, we have another coincidence!”
“Wo do?”
“Sir, my nickname at home is Nicky”
Apparently, he had been reading up my blog and figured out that it was Niki whose birthday I was referring to.

We had a great laugh.

Vivek “Nicky” Thakur, I have no doubt that you will be reading this blog too. I just wanted you to know that you are an amazing person. The mental strength you have shown in overcoming life’s obstacles so early in your life will only take you from success to success.

I will surely be around to cheer you up! 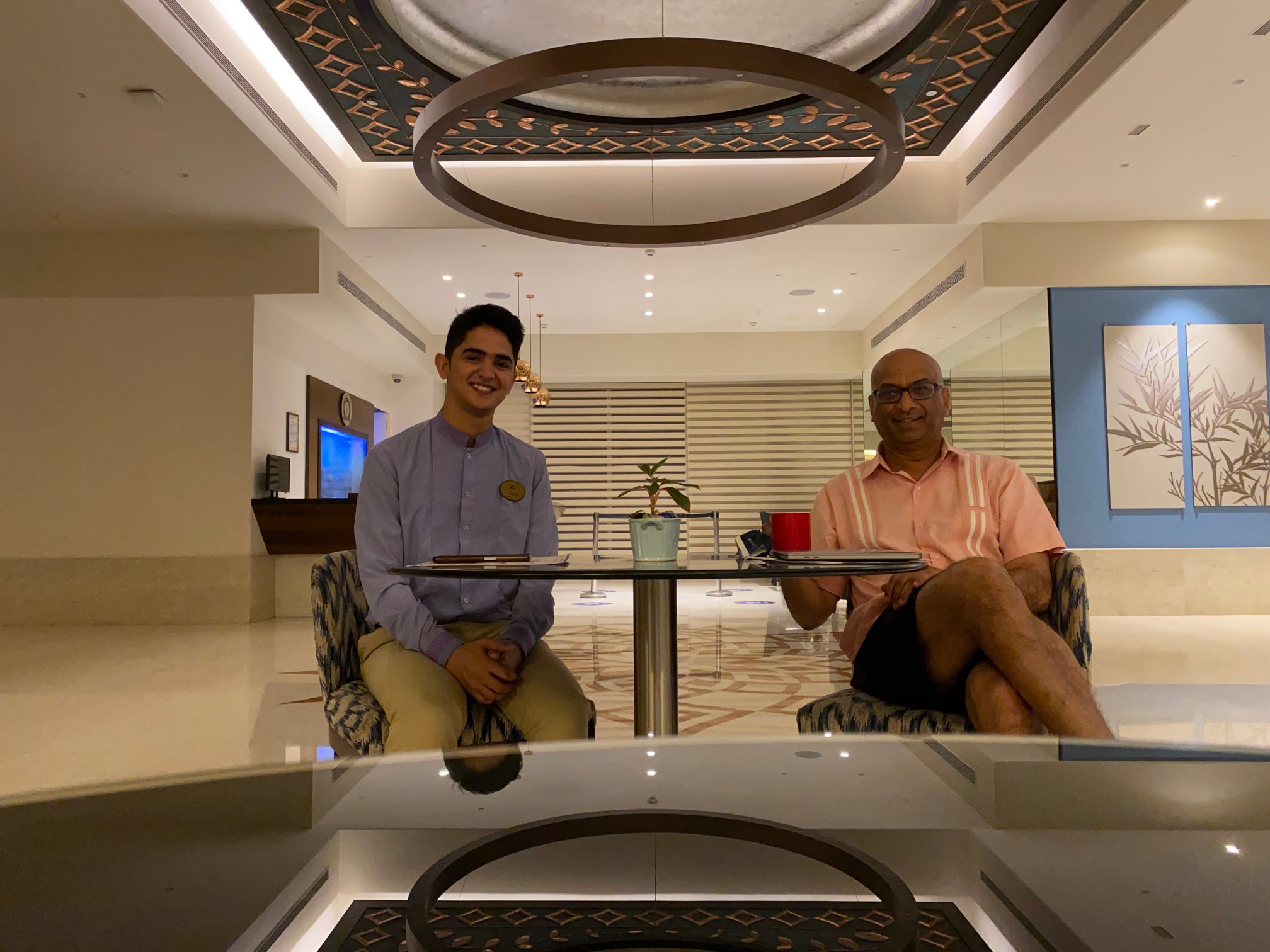 Intersection point when I was least expecting it

“Are you Rajib Roy?”, she asked.
“That is what rumor in the street is”, I said as I looked at the lady standing in front of me trying my best to put a name to the face.

A few minutes prior, my brother and I had settled down in a rather empty bar of the ITC Fortune Pushpanjali hotel in Durgapur. After settling down with two glasses of gin, my brother excused himself to go to the restroom. I was intently watching a spectacular Virat Kohli catch on the TV in the last of the T-20 matches India was playing against England. I had vaguely realized thru the corner of the eye that the lady at the only other occupied table had gotten up and was walking towards me. I assumed she was headed out for some reasons.

What I did not realize is that she had actually recognized me and had gotten up to talk to me.

I am glad she recognized me because I failed to recollect her name.

Realizing that, she helpfully offered “I am Dipita”.

Then the old memories came flooding by. It was New Year’s eve. As everybody was out on the streets trying to welcome 2017 in, I was sitting in the restaurant of a hotel – which happened to be a couple of blocks away from where I was where all this was happening – writing down posts from the day in my blogsite.

“I have to admit that I am impressed with your memory. You managed to spot me at the other corner after having met me only once. I could not do that.” I told her.

She did point out that a shaved head and shorts in Durgapur were fairly strong hints!!

By this time, my brother had come back. I told him the whole story and also that Sharmila and Dipita were classmates in middle and high school!

Unfortunately, Shubhra is no more. But Dipita and I had a great time catching up on our lives and especially the progress Ishita is making in her career.

Hopefully, next time we will have more time to chat! 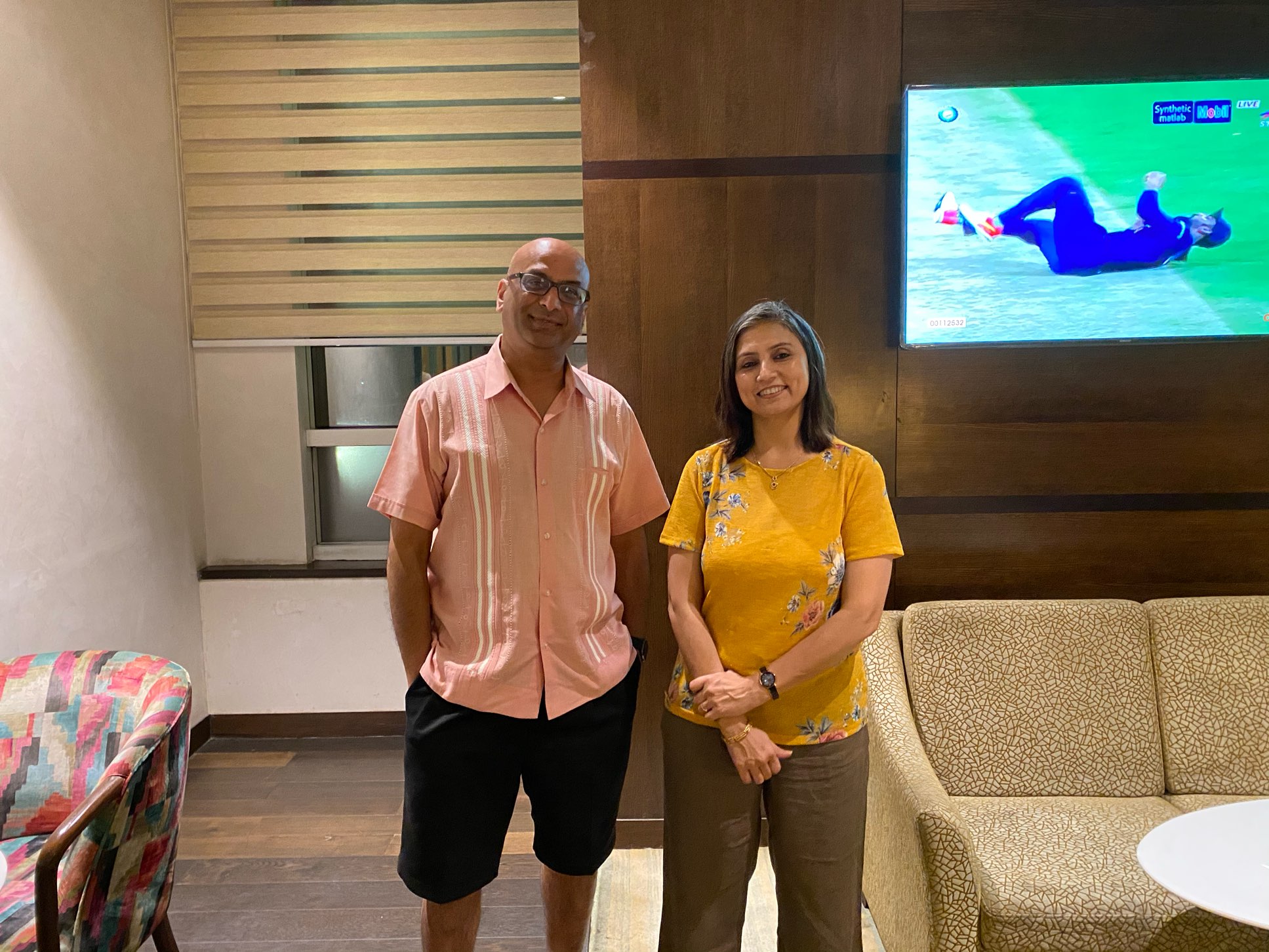 Guess who the singer is…

Last evening, I was rifling thru some old family pictures to take with me before I head out to India when I ran into this picture. Any guesses who this might be? Especially people who know my wife? 🙂

By the way, there is a funny story how over dinner at a place one evening, an elderly lady that I had just met casually dropped the fact that she was my wife’s dance teacher! Till that day – and I must have known my wife for at least thirty years by then – I had no idea that she had learnt dancing either!!! 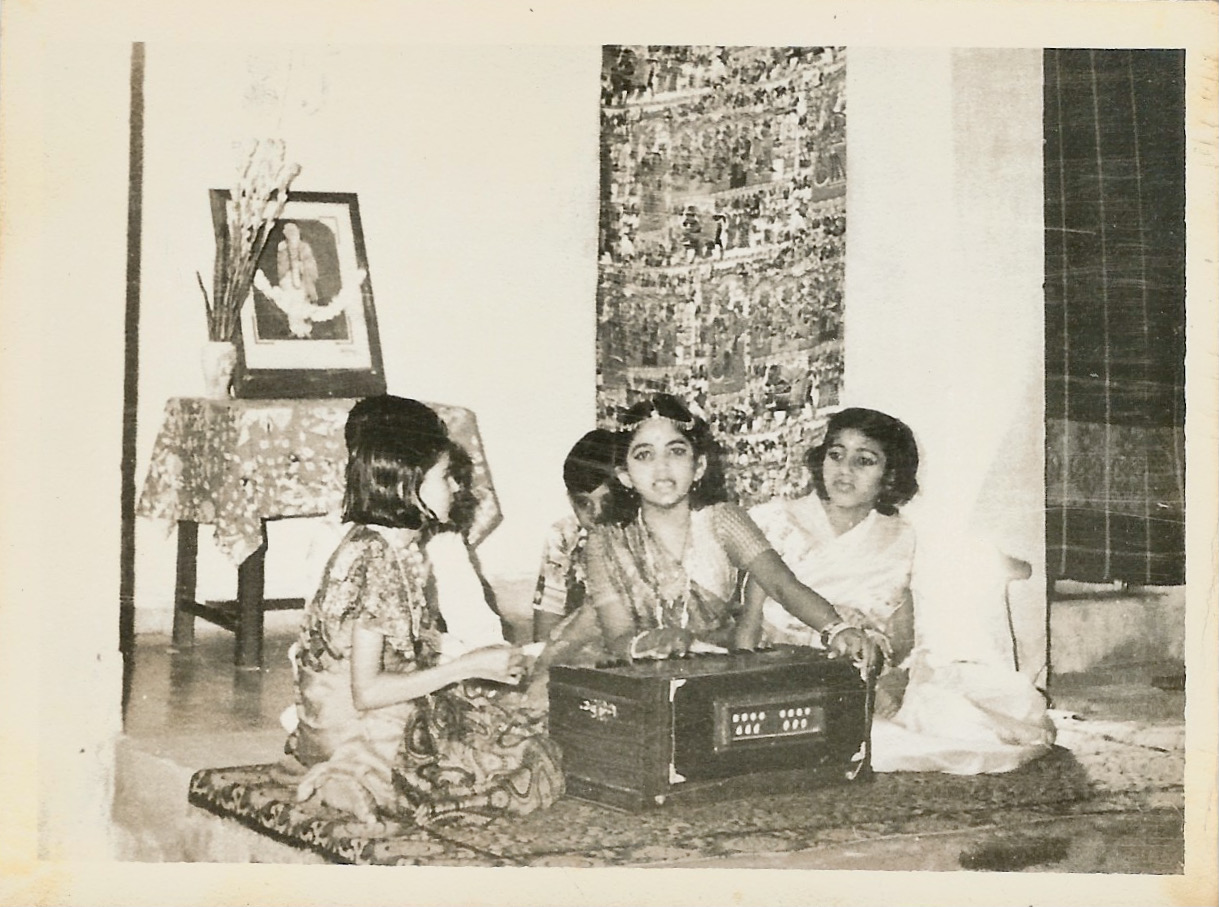