This one is for you, Vicki!

Yes, they are still making hotdogs for you in the Skyclub at Terminal 5 in O’Hare!!! 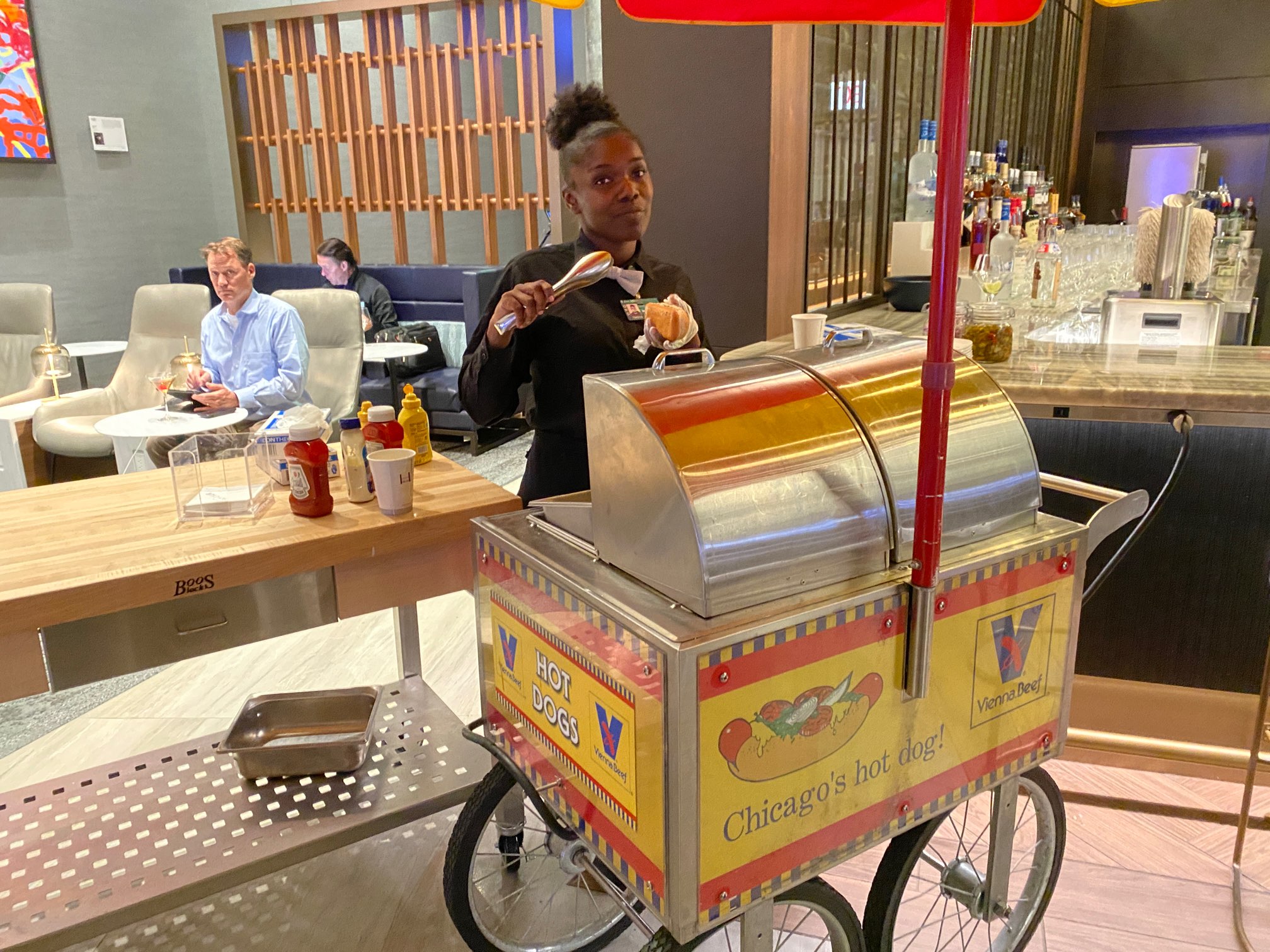 That was as close to being right above Stone Mountain as I have ever been. Just a couple of weeks back, I was there on the top with a bunch of folks that were in my hostel (dorm) back in 1985.

Interesting fact: Stone Mountain used to be called Rock Mountain long time back. And even before that it was called Lone Mountain (in the local Indian language) 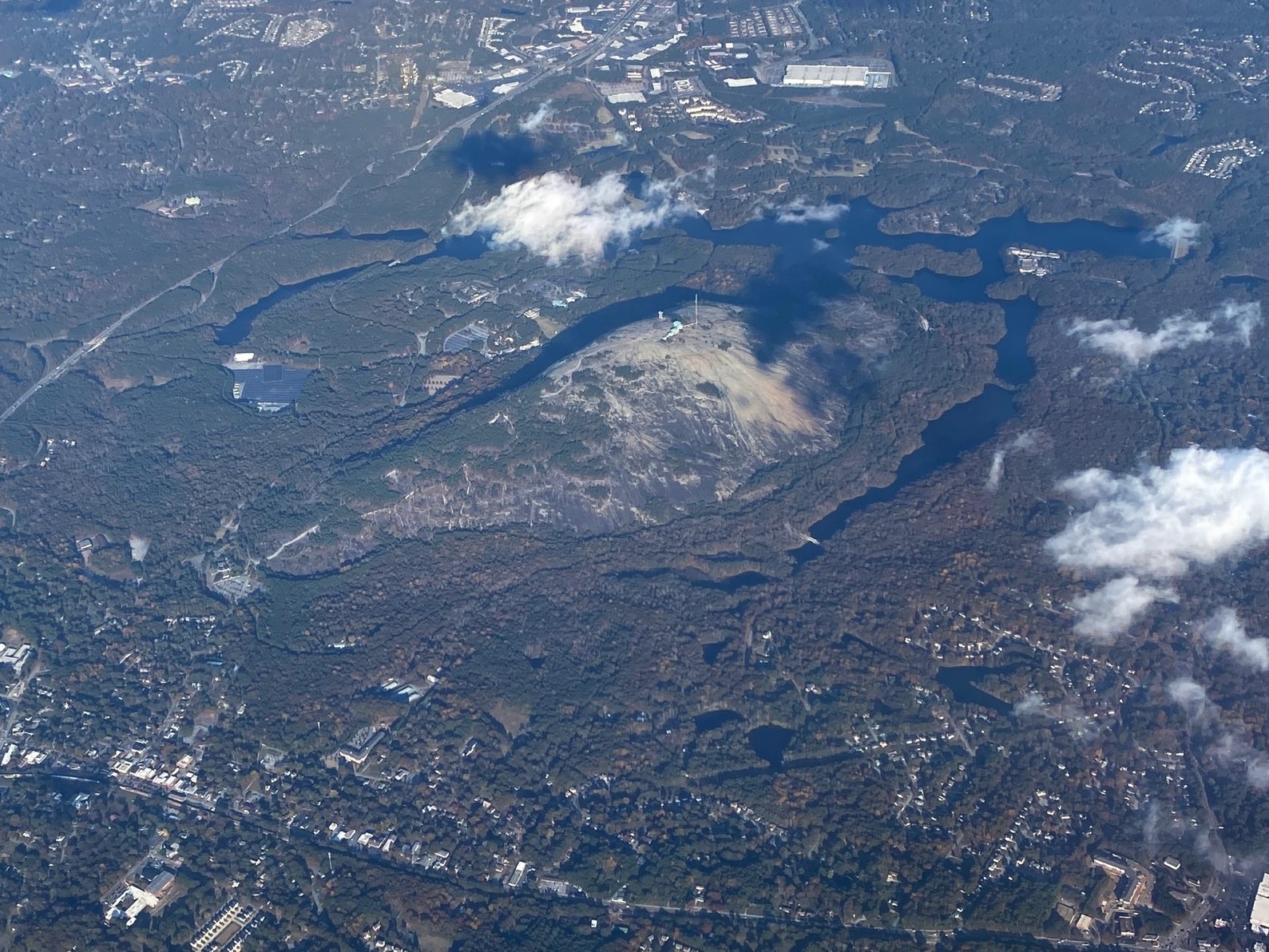 Wait. Where am I?

Landed in Chicago airport. Flying Delta from Atlanta. In the last 4 years, I have probably done this 80 times or so (counting the pandemic period!). I was on a call as I walked out of the plane, instinctively took a right turn and soon realized that I was totally lost.

Where the heck was I? Why does the airport have so many bright lights? Which airport did I land in?

I walked back to my gate. And took a few minutes to put the whole thing together.

Delta has now moved from Terminal 2 to Terminal 5. Terminal 5 is the international terminal. It is much much better than the previous one. It is so much more spacious, well lit and the Sky Club? infinitely better.

I am really, really happy Delta has moved. Now I have to wait another month till they start Clear in this terminal. 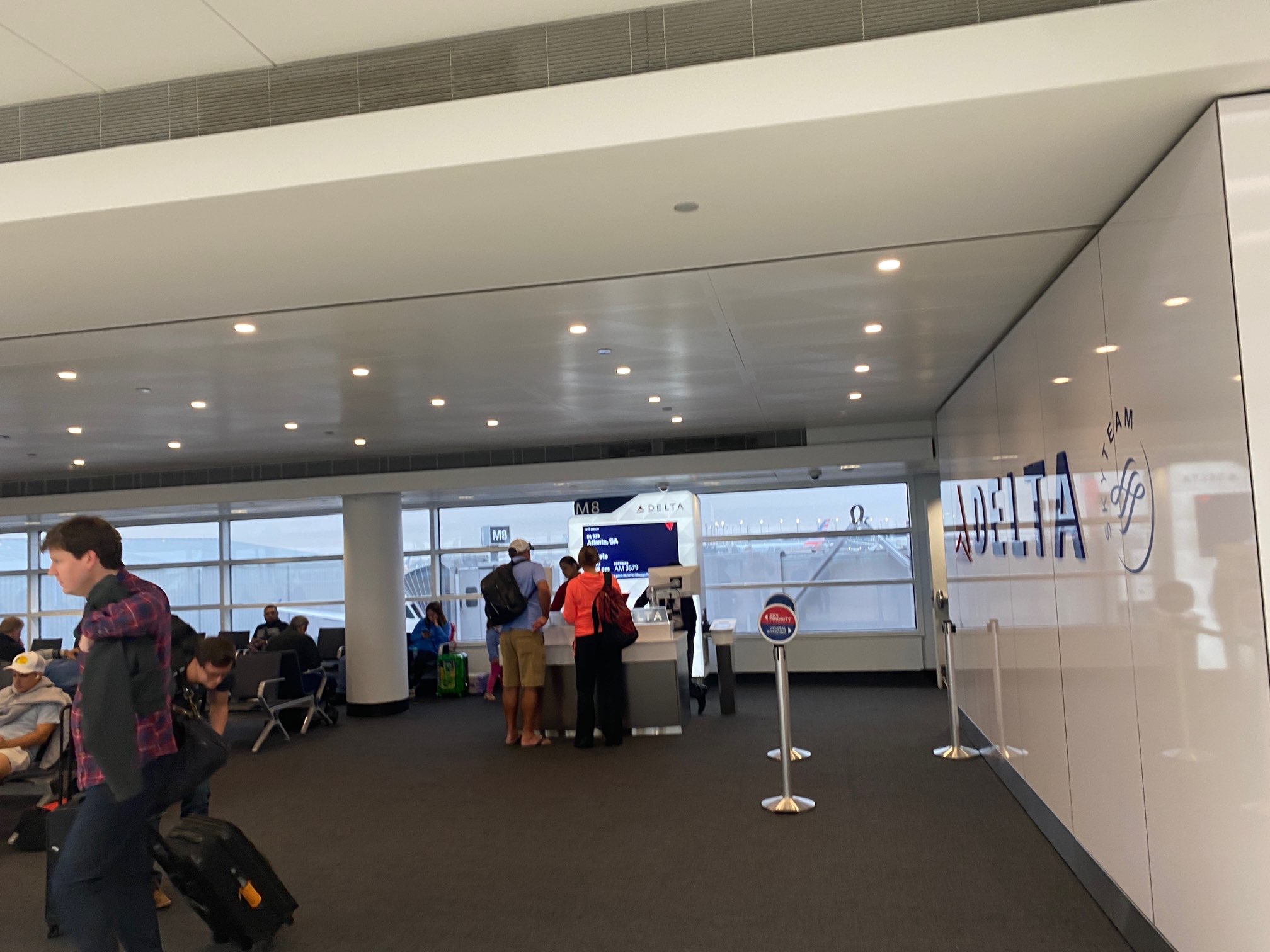 The best part of all travel for me is not the magnificent beauty nature has to offer that one can behold. For sure, I remember many of those glorious moments. It is certainly not anything to do with the long dead people.

To me, it is the now and living people in those places I visit. You may remember my family’s disdain at me when they went inside the Colosseum and I was perfectly happy to stay outside the gates and talk to those horse carriage owners nearby.

This is strange. Because you never travel to far flung places with a goal of meeting strangers. You travel to see things. Yet, while I have certainly seen those things, what I really remember most are the small snippets of conversations with local people that I got to meet for a few minutes in those travels.

Especially if they speak in a foreign language. That opens up another dimension of learning trying to piece together a conversation from some basic constructs – like pointing at objects.

Whenever possible, I try to take their contacts, befriend them on Facebook and call them on their birthdays. And try to extend that “travel” thru those birthday calls or WhatsApp messages to enquire how they are faring in life.

This trip to Jordan was no different. There were quite a few strangers I met that I did not get the contacts but I wish I had – especially that gentleman called Zoltan from Hungary and his fascinating camera set up. And for ever they will be consigned to the history of my memory.

And then there were some that I did get the contacts – so I can relive my Jordan moments.

There was Rahman from Bangladesh who took special care of us at the Al Manara bar, there was Houda and Othma in Doha who promised to help us source some native lamps from their country – Morocco, there was Khaled at that gift shop who insisted we have a coffee with him before we left, there was Shahd from Palestine in Petra who gave us a lot of tips around the place, there was Ali our rescue driver when we had a flat, there were Sourov and Chandrima (Agomoni) who we met the last night before coming to the USA and so on and so forth.

Of course, there were the old friends we got to meet again like Peterson at the Dead Sea Marriott bar, Mahmoud at the Dead Seat itself, Natasha, Manojit and Paramita in Doha and the al-Ramamneh family (Mahmoud, Amal, Thair and Suhaib) in Jordan.

But the best – by a wide mile – was a young gentleman, pushing five years at best, that became my friend on the last night. We had some great times together that included finding coins from his ear, a few more magic tricks, juggling with balls and as the picture shows some acrobatics.

The laughter on Reevan’s face as we played together – priceless!! 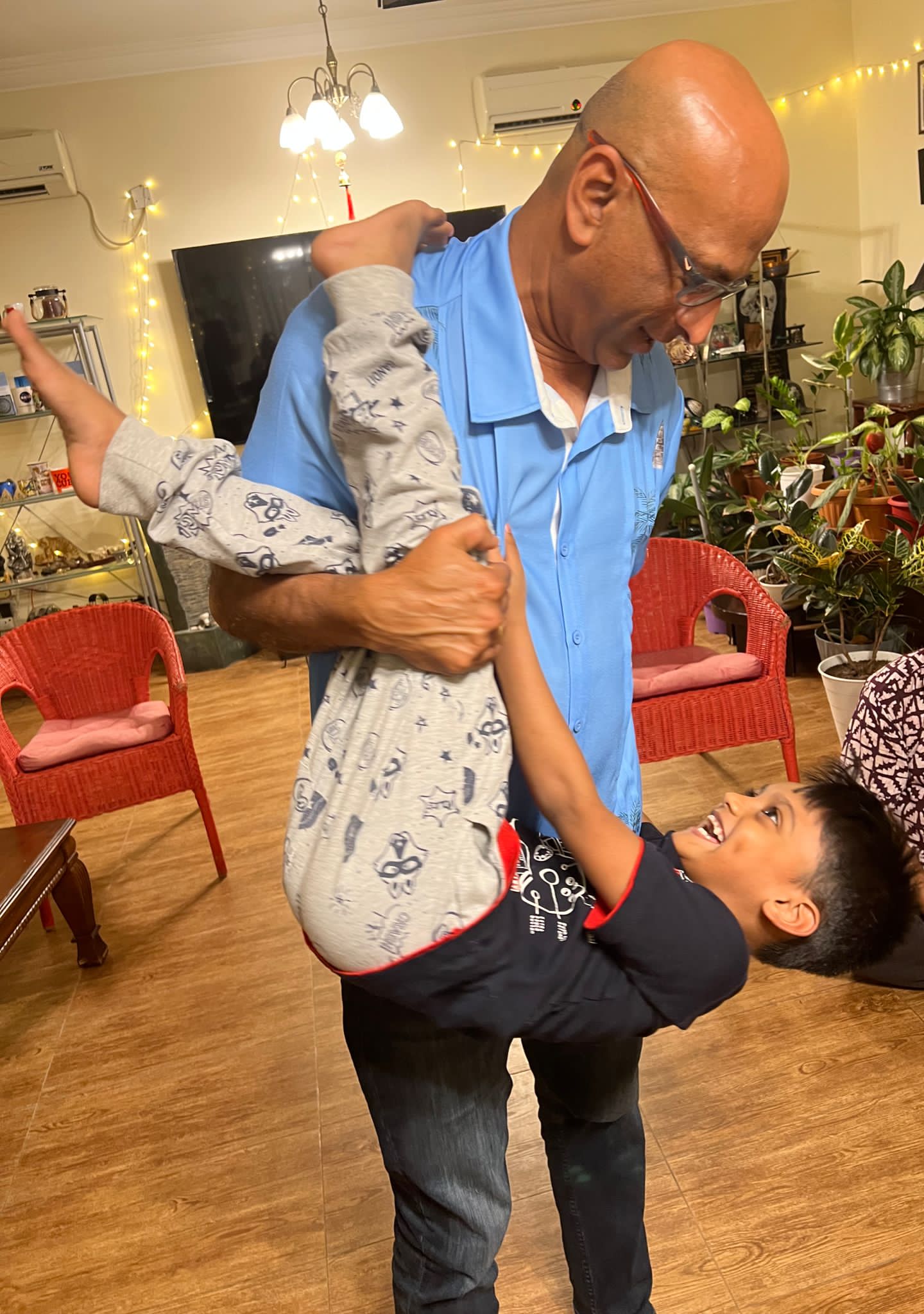 Any scientific explanation for this?

As I was looking into the clouds on our way to Budapest airport, I noticed something on the left bottom corner. It looked like a rainbow but very circular one. Took a few pictures and color enhanced one of them. Sure enough it looked like a circular rainbow.

What I am not sure of is whether it is a true rainbow or something to do with the window of the airplane. I checked thru two other windows – I could still see the “rainbow”. And after a few minutes it went away – although the clouds were still there.

Can anybody throw some light on this? (sorry for the pun). Is this a real rainbow? Can rainbows be of this shape? 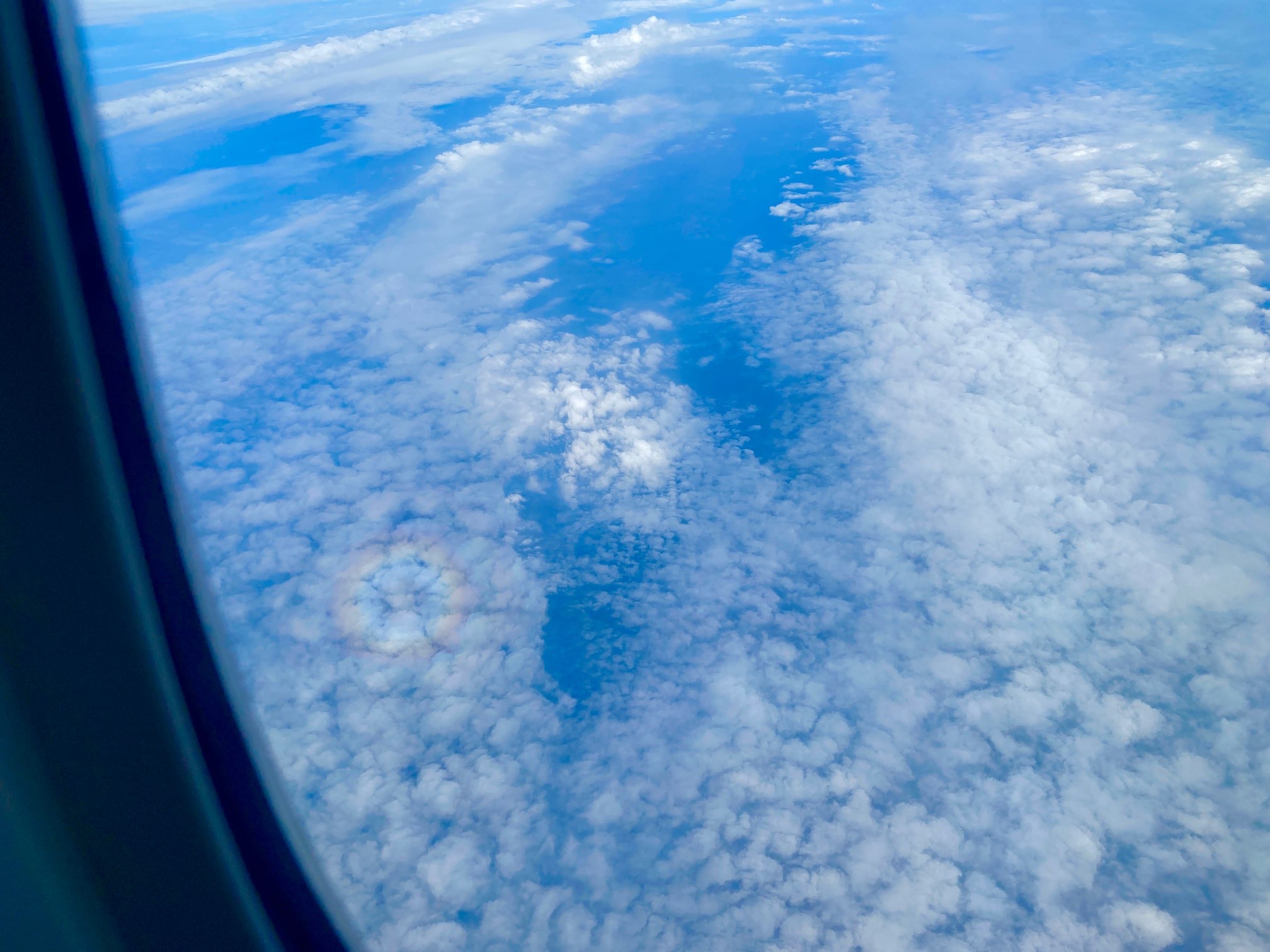 We were taxing to the Budapest airport, when I saw something intriguing. It looked, from a distance, like a bunch of folks with their construction jackets on sitting on the ground. As we pulled closer, something more interesting and heart warming emerged.

Those are a bunch of school kids. From the sign on the bus “Air Tours”, I assume they have been brought by the school to watch planes land and take off. You can see a few teachers also around (they are the ones standing).

The excitement the kids had as the big jumbo rolled past them was palpable. They involuntarily started waving at us. Not sure they could see me thru the window, but I got caught up in the moment and kept waving back at them too!

Flying has become so run of the mill today that I often forget the romanticism that was attached to it when I was a kid. (I got to fly for the first time when I was 27 years old). Watching a plane go above us would bring all our sports activities in our neighborhood to a stand still. Especially if they left the contrails behind.

Interestingly enough, as a kid, I had a very wrong impression of how planes land (or take off). I used to think they go in circles as they lower in height! Ah! juvenile ignorance!!

By the way, I do not think this scene will ever happen in the USA today. These kids can literally walk onto the runway as you can see. Of course, there is a cop car there to ensure such a thing does not happen. But I just do not see such a thing happening in the USA without having a fence between the kids and the runway for safety. 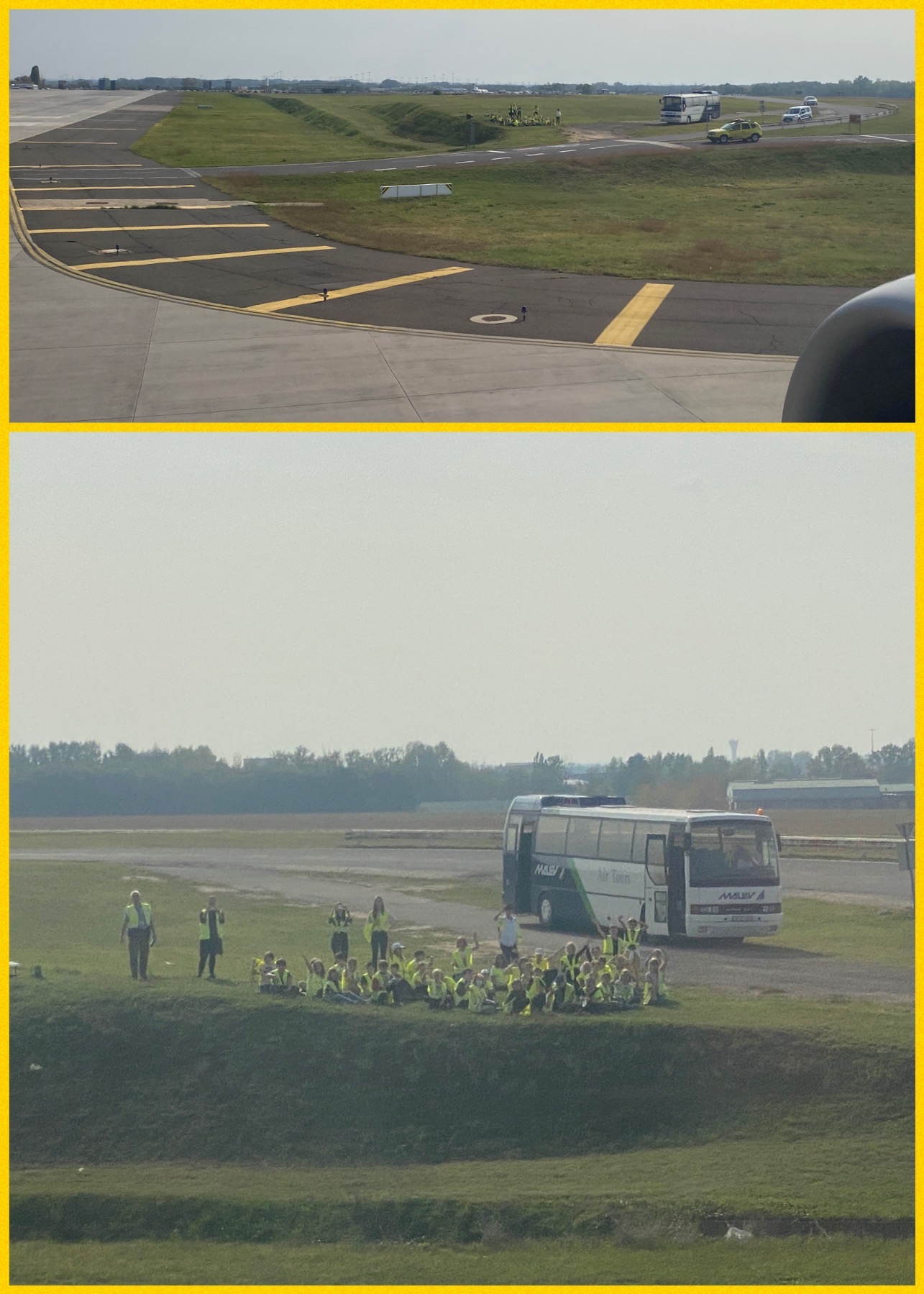 One more interruption on our return journey

As you can see, this looks neither like Doha airport nor like Atlanta. That is because we have landed in Budapest!!

Medical situation in flight with an elderly (75 years) gentleman. Unfortunately, he is very sick and is traveling with his wife only. Neither understand English (only Kannada).

Chatting with the staff, I understood that the procedure in these cases where a decision has been made to divert a plane for medical reasons is to offload the patient after initial paramedic attention and the passenger is NOT allowed to board back the same flight.

I hope he quickly recovers and the elderly couple do not have too many difficulties with language in getting local help.

On that note, I think this is the first time I am seeing the Danube River. 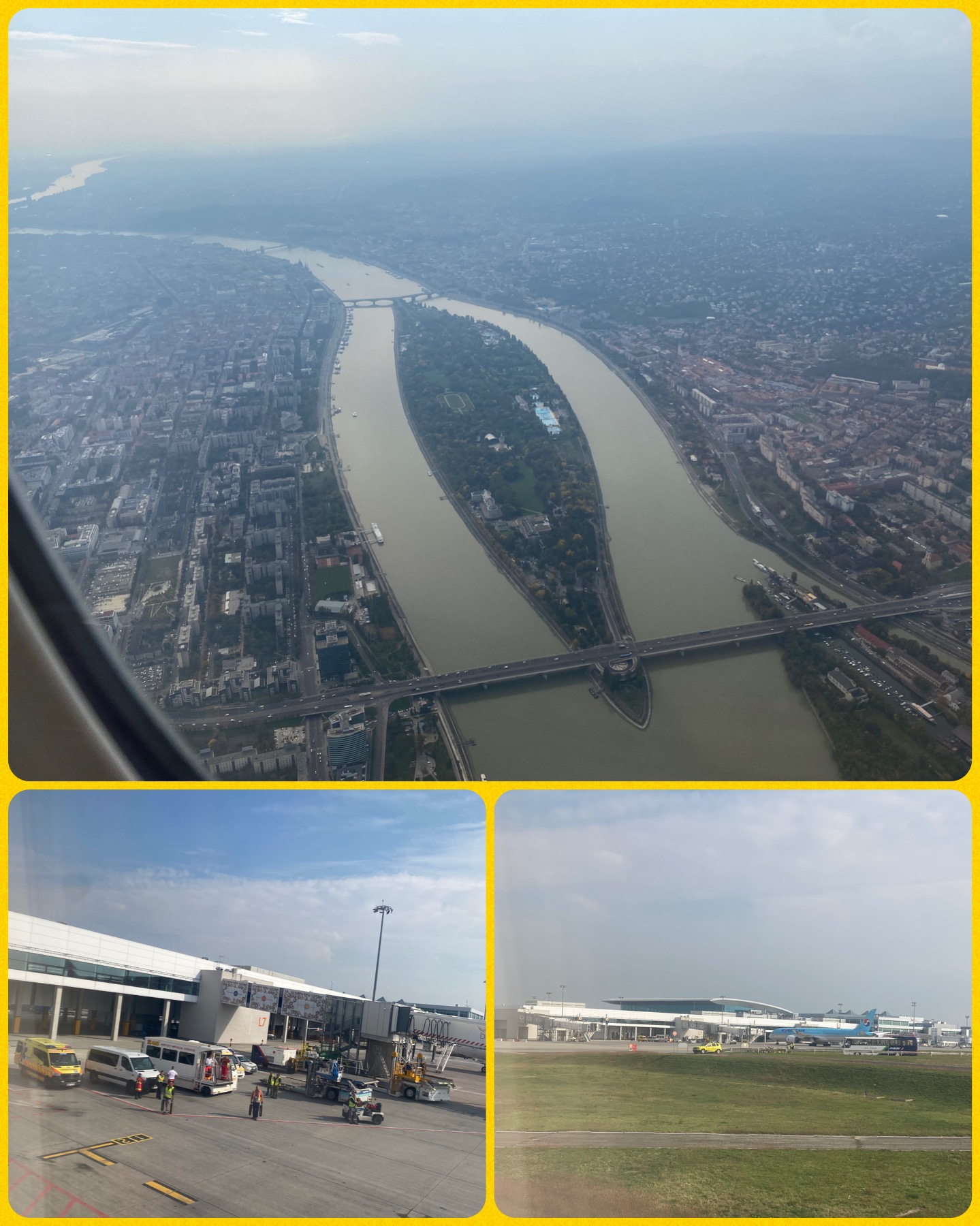 The moon rising over Doha cityscape 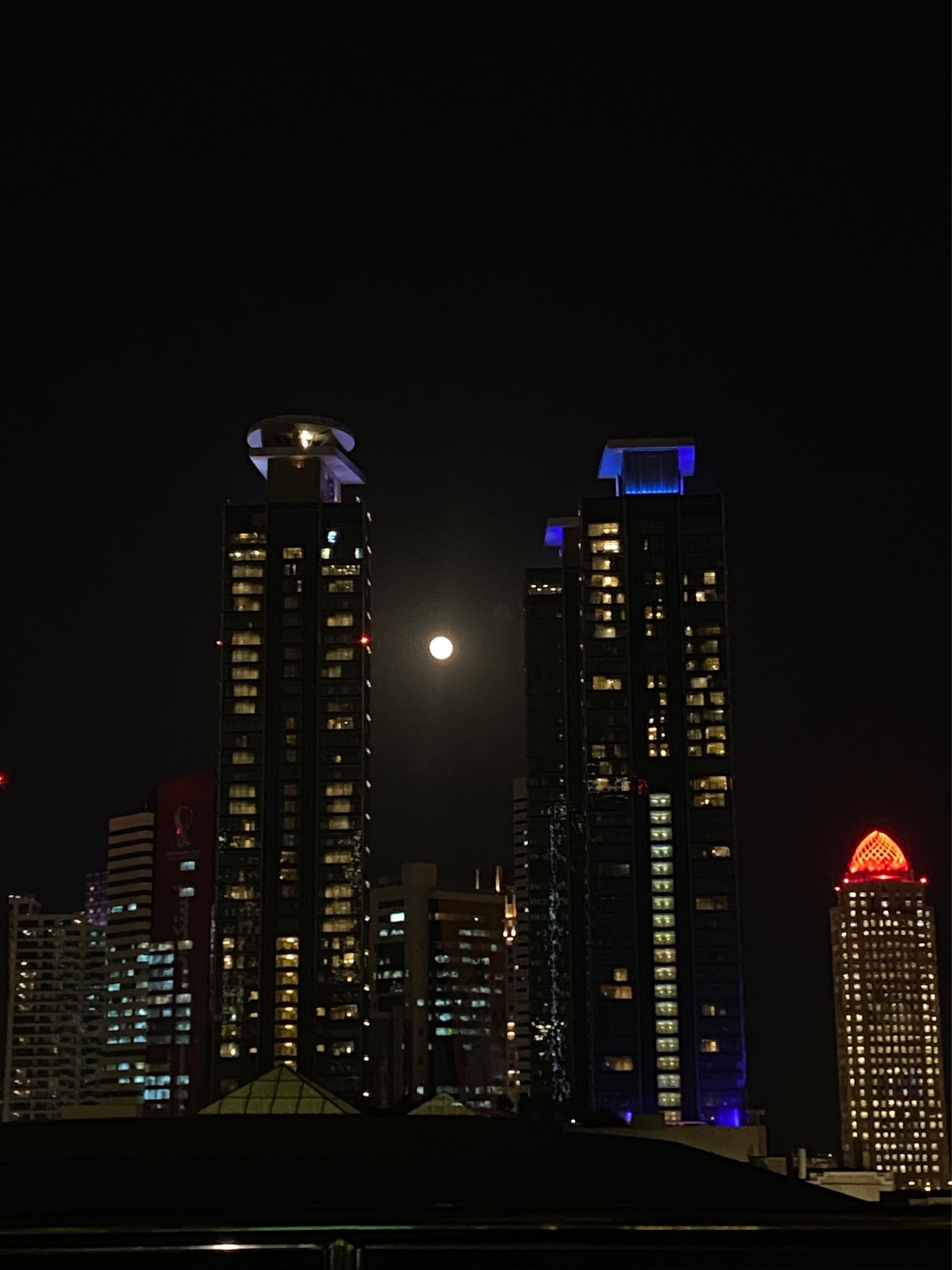 It was last December that I had met Manojit and Paramita in Durgapur – entirely due to efforts taken by them. We had found so many intersections points that I do not think I could even document all of them in that post. Before we parted, I had promised to see them in Doha next time within a year.

And today was that day.

Had a great time at their place this evening. Also had the fortune of meeting Sourav, Chandrima and of course, little Reevan! 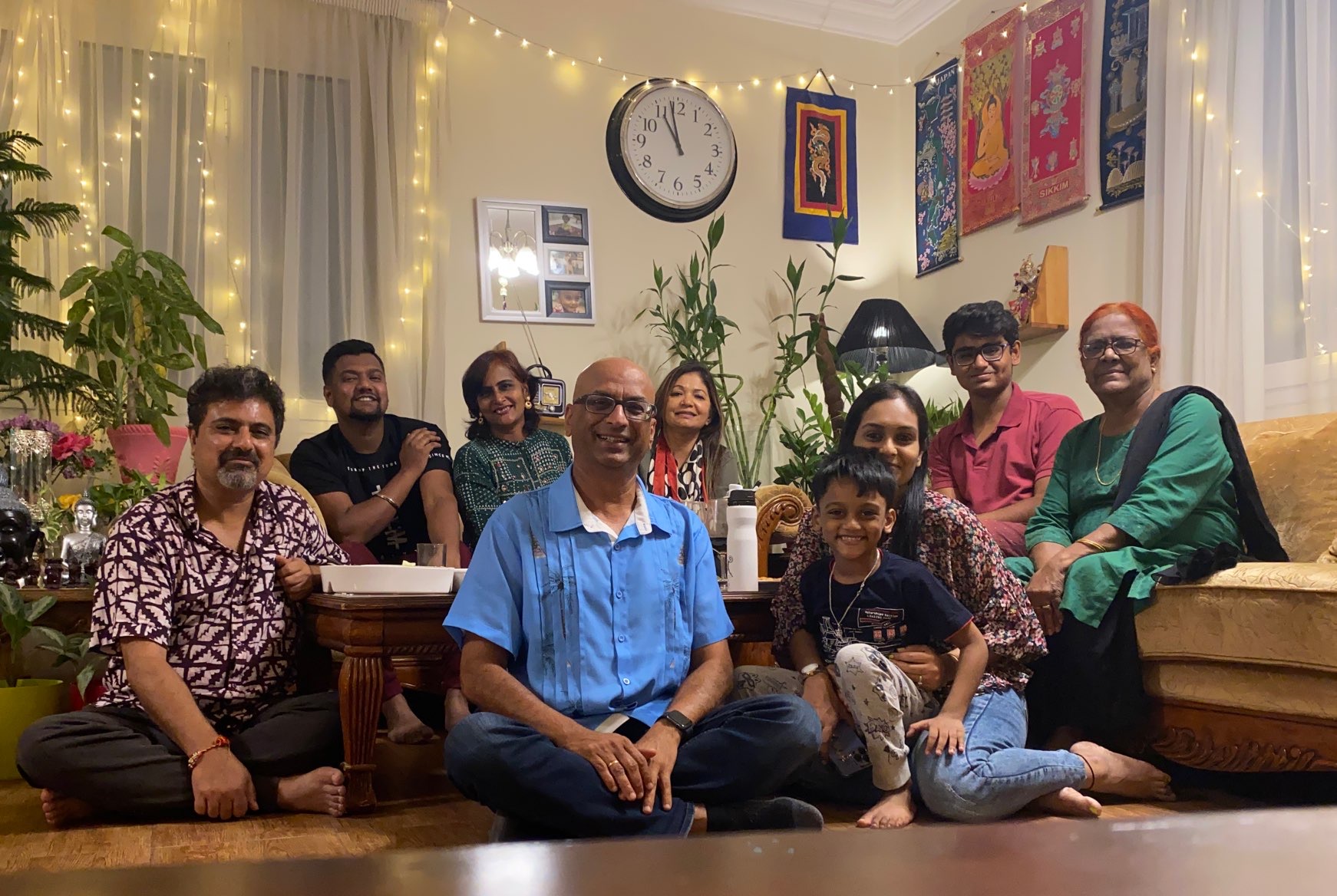 We go thru Doha about four to five times a year. We never get out. Other than that one time when I had convinced the immigration officer to bend the rules to let me go and meet Natasha and Gina outside the airport.

We had arranged our flights to have a night stay in Doha. There are two people we know in Doha.

First order of business was to see Natasha. We used to run together many moons back in Atlanta. In fact, in 2015, after one of those runs, we had coffee together and had talked about us visiting Galapagos some time.

Those plans were pulled out from the backburner this evening!! 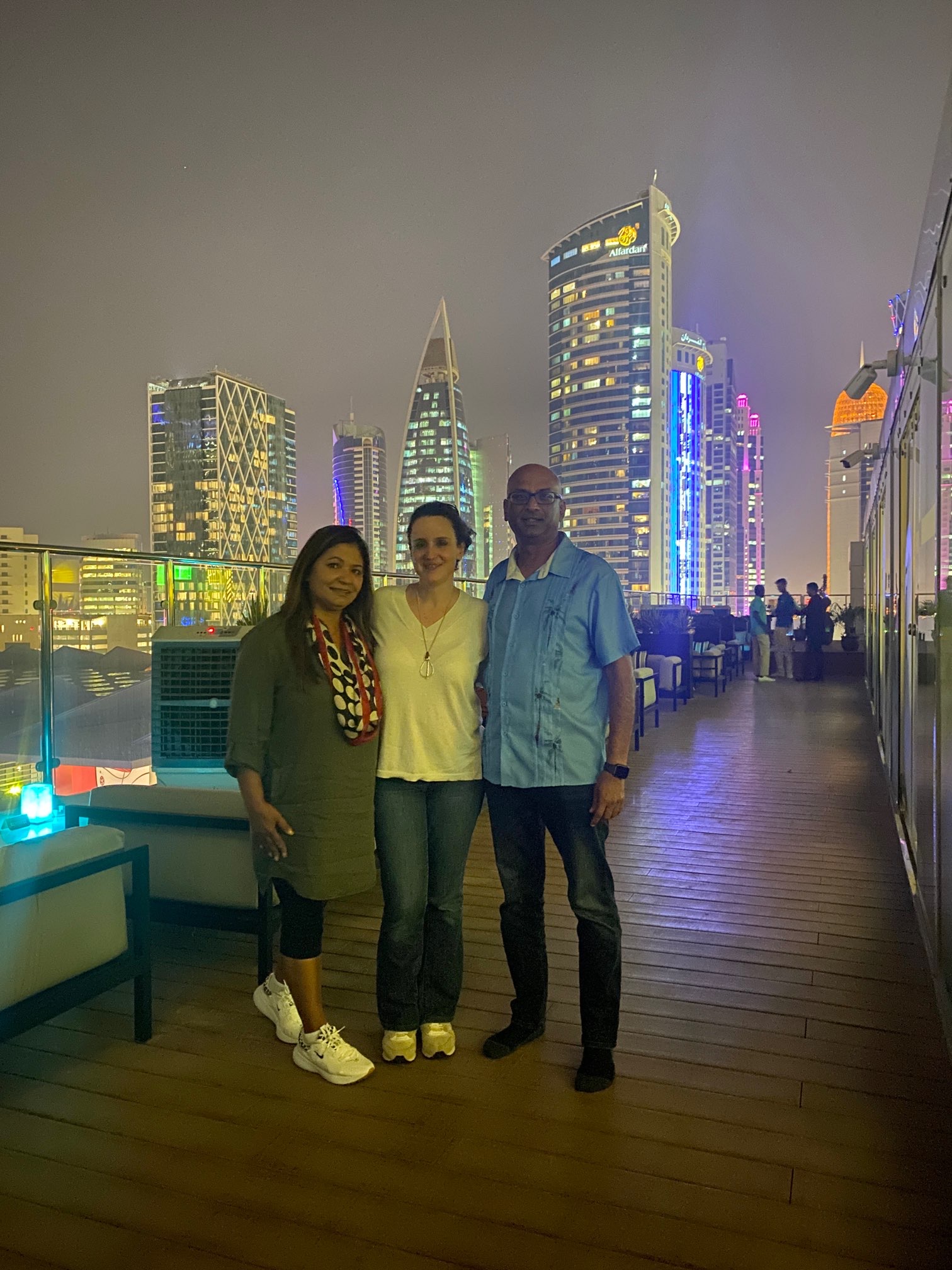