This is why I believe the world is so small

Sharmila, Jay Jay and myself had lapped up our first drink in Truck and Tap (well, Jay Jay did not drink – he had his kibbles) and decided to go walk for a bit before we sat down for a second drink. We started milling thru the Friday evening crowd – taking in all the Friday evening folks, dogs and small kids. Jay Jay started looking for more and more “marker” spots.

Suddenly, I heard from behind – “Hey, hey! I know you!!” Looked back and saw a very sharply dressed young lady – who we had passed just a few seconds back – seemingly addressing me. Did a quick look back to see if she was talking to somebody behind me – but she continued – “I am Maria”.

I am not terribly sure how our brains put these things in a flash – but right then and there, I immediately knew who she was.

“Maria? Portland airport? That bar? You two were headed for honeymoon to Bora Bora?”

“Ryan?” – I now addressed the gentleman next to her with the cutest little baby with him.

That was simply incredulous. Usually, I am the one who recognizes people and remind them (sometimes to their regret) of how we had met before. Also, I had gotten the airport wrong – it was Los Angeles, as Ryan pointed out.

It was way back in an October 2016 evening that I had dropped down dog tired at a bar in LAX airport to grab some Hot Wings. A young couple came and sat next to me. Of course, I had to make friends with them (I said I was tired, I did not say I was out of character). I distinctly remember Maria picking food from Ryan’s plate before he could even get started – and warning Ryan that nothing would change twenty five years later. Sharmila does the same!! (You can read the whole story here).

Maria and I stitched the story together for Sharmila – who, at the end, nodded knowingly – “That sounds like Rajib alright!”

Maria (actually Maria-Angela), Ryan and I had kept up with each other on birthdays. Both Maria and I lost our fathers in the meanwhile. And they moved to Alpharetta to have their first baby! Ryan apparently had mentioned to Maria that one of these days, they were surely going to run into me!!

Well, today was the day that his premonition would come true! I did not recognize them as they passed me! But they did!! In my defense, they look even more beautiful five years later and both had shades on!

In the meanwhile, Brooklyn (their cute daughter) had taken a fancy towards Jay Jay – who was wondering what the whole commotion was all about. I picked up Jay Jay so Brooklyn could touch him and play with him.

What a memorable evening it turned out to be!!

Who knew that simply moving my chair to give a young couple some sitting space at an airport bar would turn out to be another intersection point right in our home town – literally on the other coast – five years later?

Human beings and human relationships are such a wonderful thing.

And so is serendipity! 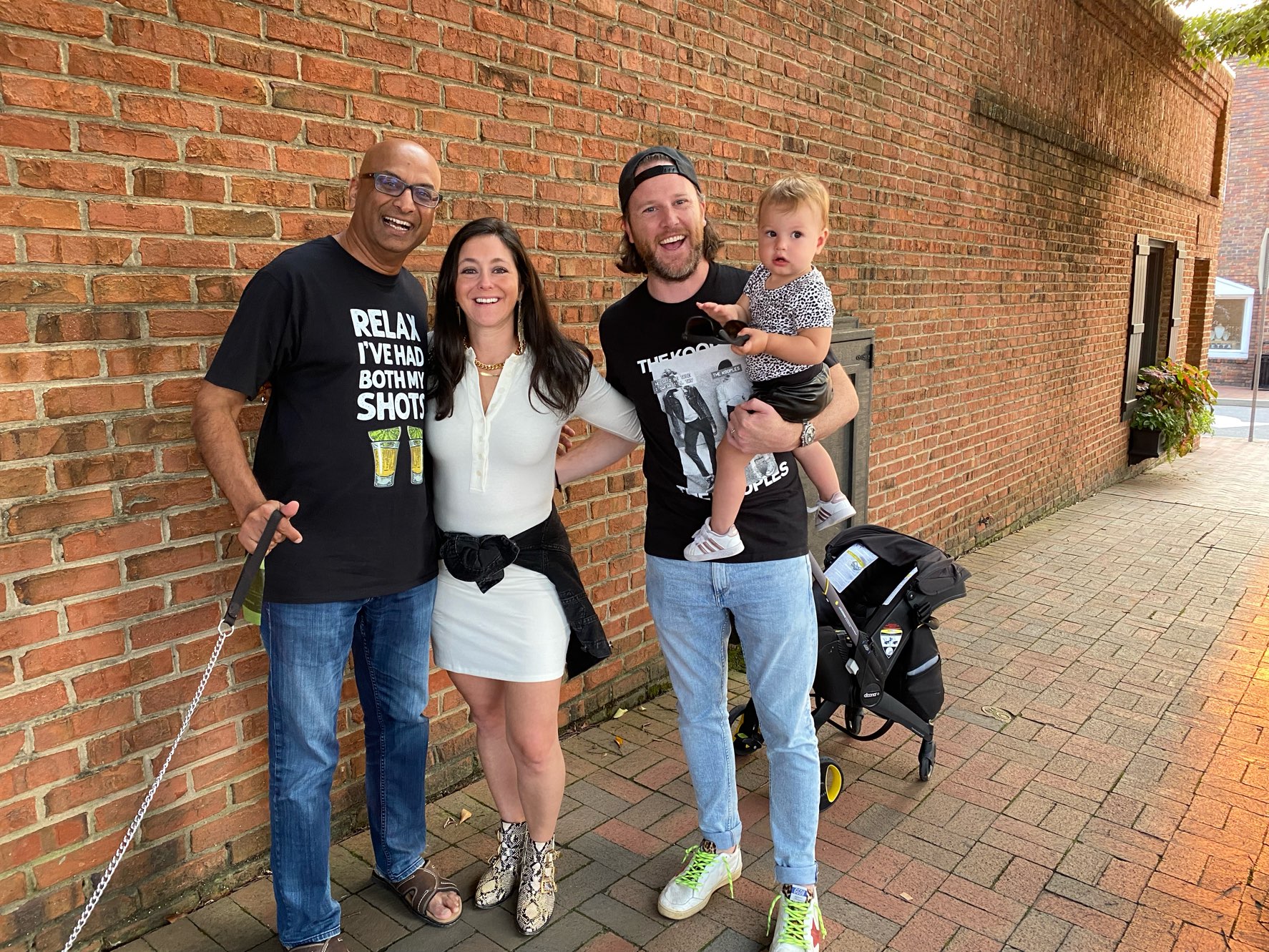