The downside of not having a stage rehearsal

“Chintey paarchhis?” was the message that came to me along with a Facebook Friend request. I had no doubt in my mind – “Sontu-da to?”. Apparently, it took him by a little surprise that I had readily recognized him. Which was understandable. We lived in the same neighborhood for three years only and even then since he was three years senior, we did not have as many interactions as the other kids who were nearer my age.

I remember meeting him for the first time during the winter of 79-80 when we moved to a new neighborhood. The last time I saw him was around the winter of 83-84. I had already left home for a residential school and then Sontu-da’s family moved out of our neighborhood. Day before yesterday, my brother and I pulled up in front of his house in Citi Center, Durgapur and was able to see him and talk to him – more than 35 years after we had seen each other last.

We went thru some of our old memories. I recollect Sontu-da teaching me 2 different card tricks the very first day I met him. In fact, I remember playing a lot of cards with him and the other kids in our neighborhood when it got too hot to go outside and play in the field.

But the most remarkable memory we both had – and shared a common laugh together was something that had happened in the summer of 1980. In those days, if you were to land in Durgapur unsuspectingly around second week of May, you were bound to see many a neighborhood putting up a make shift stage in the evening – usually in some open space, but sometimes bang in the middle of the street. That was your first clue that the season was upon us for Bengalis to get our annual urge to display our hidden histrionic, musical and poetry reading talents. The ostensible reason was celebrating Rabindranath’s birthday – “Rabindra Jayanti”, as we would say.

Sontu-da had taken upon himself that year to get some of us kids – very wet behind our ears when it came to acting – to act out a play written by Rabindranath Tagore. “Chhatrer Porikkha” (The Student’s Test), if my memory serves me right. Our practice sessions were a riot of misread statements, jumbled up words and sometimes entering the scene way too early on a miscue. It did not exactly help that half the kids in my neighborhood those days used to stammer with different degrees. But give it to us for putting up a spirited fight.

Now, in that particular play, I was given the lead role – that of the student. Yes, you can safely guess from there that none of the kids were going to have a bright future in acting later. Be that as it may, my purpose was to try and get rid of my teacher by purposely giving ridiculous answers when he would ask me questions in front of my dad who was paying a visit to check on my progress. I distinctly remember a question where the teacher was going to ask me something like – “If a palm tree grew in height by two feet everyday how tall would it be at the end of ten days” – or something like that. My impish answer would be – “depends upon if the tree was growing straight or in a crooked fashion”. You get the gist of it.

Well, at the end of a few weeks, I think Sontu-da had gotten the motley crowd to a modicum of decent performance. We were brimming with a fair amount of confidence a couple of days earlier when we realized that nobody needed a cue or a prop to remember their words.

The actual performance on the stage was a whole different ballgame though.

To understand that, you have to realize that we never had any dress rehearsal or stage rehearsal. For one thing, the stage was going to be set up only a few hours before the actual show. Setting a stage up essentially meant going around house to house asking our neighbors to lend us a cot. Once we had gathered about four of them, we would put them together and then cover them with some kind of borrowed cloth covers. This was out in the open. So, you were not going to do any such thing till about a few hours before the show. Otherwise we would need somebody to volunteer to be at the makeshift stage to prevent those cloth covers or cots getting spirited away. Sitting out in that sweltering peak mid-May heat in Bengal would scurry off many a brave soul. We were mere kids then. We needed rest before our performance, moreover!

Trust me, there are details of acting that you completely miss when you skip a stage rehearsal. And this is not counting those cases when the rickety cots were of uneven heights or some of those cloth covers on the cots got themselves entangled. You can get caught on the wrong foot on many other snafus.

Case in point: When I started giving all sorts of ridiculous answers to the questions from my teacher – none other than my next door neighbor Debasish – his part of the acting involved getting frustrated, scratching his head and pacing up and down. And try the next question.

So far so good. Now, let me remind you again, we were young kids trying to put up a public performance with very limited access to means. We needed to dress up Debasish as an elderly, respectable teacher. How do you make somebody look elderly? Sure – you dump nearly a bottle of talcum powder on his thick headful of hair.

The fun really started in a few minutes. The audience – not exactly holding us to high standards – seemed to have settled down and was getting into the act. I had gotten over my initial stage jitters and was fluently belting out those crazy answers that I had committed to memory. Debasish, with equal verve started pacing up and down the stage showing the required amount of impatience. And commenced to profusely scratch his head.

Yes. One of the important lessons we all learnt in our short career of acting that evening is that when you have a head full of talcum powder, you are well advised to stay away from profusely scratching your head. Powder starts flying out of your head and you look like a walking and talking chimney. Worse, you don’t see it yourself. You just see your co-actors desperately trying to hold heir laughter. The audience? Not so much. You think you are doing something wrong. Which means you get panicky and that scratching increases in its intensity considerably. Leading to you know what….

The not-so-virtuous cycle unfortunately continued till Debasish literally ran out of talcum powder on his head. At which point we all picked ourselves up from the stage and finished off the play with all sorts of jumbled lines.

Epilogue: Speaking of profusely scratching, we scratched off acting as a career next morning during our post-play get together.

Ah! Those simple times! Those really good times. Wish they would come back even if for a fleeting moment…

Anyways, it was great seeing you Sontu-da and remembering those times! 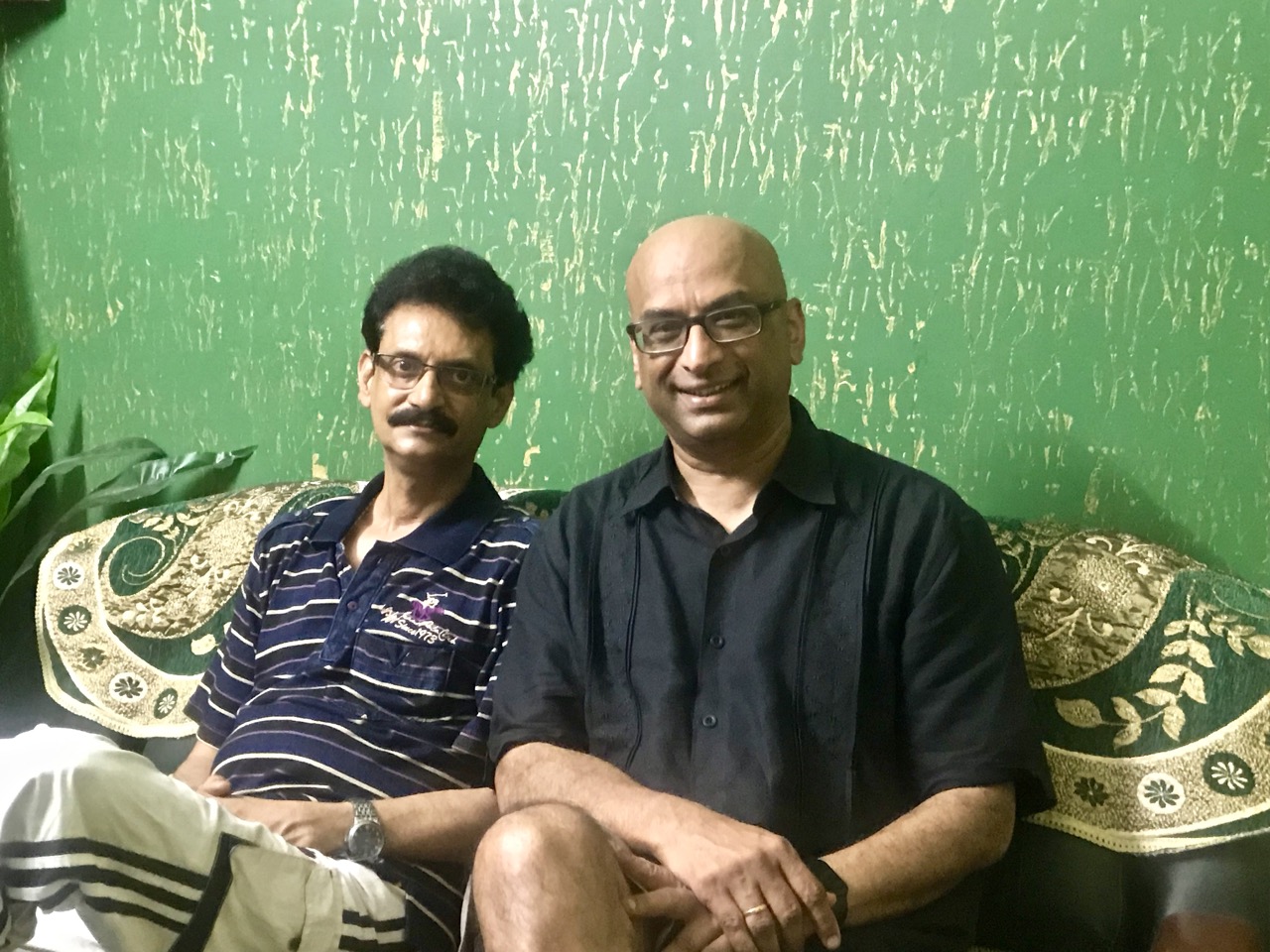