This is going to be a very difficult story to string together. This involves a complete stranger in Singapore, a hospice patient in Atlanta, a small resort called Ibeeza in south part of West Bengal and an office building in Kolkata. Also, an untimely demise. At the end the story is that of an incredible attitude.

Let me give my best shot at stringing this together.

“So, exactly, how do I know you?”, asked her after we settled down at the Gin and Tonic bar at JW Marriott in Singapore.

This is the first time I am seeing her in person. We had become Facebook friends for some time and even exchanged a lot of messages (more on that later) but I forgot how I got to know her.

Turns out Indrani worked in the same office in Kolkata as my school mate from middle school days – Suman Das. They used to sit at desks a spitting distance away. Apparently, one of those days, she had mentioned to Suman how she loves following a few blogs and the write-ups that she reads there. Suman – not exactly known for having high standards while referring blog writers – asked her if she had ever seen my blog. Turned out Indrani liked my blog too when she started reading them. (I think that office attracted people who liked low quality blog writing 🙂 🙂 ).

In any case, all this happened unbeknownst to me. Then one day, I got a FB request from Indrani. Like many other requests, I just let it be since I could not recognize the person. I suspect she must have asked Suman why I had not accepted. For one day, I got a message from Suman saying his friend has sent me a FB request. She likes reading my stuff and that he knows her personally and can be trusted.

I accepted that request and that was that. I kept writing and she kept reading silently.

Then one day, I wrote about Mr. Thompson – the blind patient I have in one of the hospices. One of the things if you remember I had asked him about his thoughts on being born blind versus losing eyesight later in life. Which one was more difficult? I remember his thoughtful answer -while he admitted not coming from a position of having gone thru both to do a true comparison, he felt it was harder when something is given to you and then taken away.

That statement resonated with Indrani. Over personal messages she kept telling me why that was a very timely message for her. During our meeting at the bar, she joined all the missing dots for me. Her life story is an amazing one. Like many lucky ones, she started with a great job at an early age, met the love of her life and married him. For seven years, she lived the blessed life of a great husband, great inlaws, great friends, great jobs and of course her great parents.

And then one fine day fate dealt a cruel blow and she lost her husband at the tender age of 32 or so in a matter of hours after succumbing to brain aneurysm. Her words drifted away as I lost attention – just trying mentally to put myself in her position. When I finally came back to my attention, she had already covered the part where – to add to all the sufferings – she lost her father in law too after a year or so.

It was around that time she started reading my blogs. As she struggled to cope with the losses in her personal life, facing a situation that most people do not face, it was a struggle to figure out how to move forward or even what to do next. One thing she kept mentioning is how she had very supportive in laws, parents, friends etc through all that. I was pretty intrigued by her positivity. For that age, that had to be a sign of great maturity and equanimity.

To probe a little I asked “As you look back, how do you feel about those days? There must have been a sense of helplessness. A sense of why do you have to go thru so much pain?”

Her answer stunned me. Remember she is barely in her mid thirties. Her perfect framing of the answer was (and I liked the way she put it so much that I had to ask her to excuse me as I wrote it down on my iPad) – “Everybody has problems. Mine came this way.”

What an attitude!! I would be lying to you if I did not admit that I had to fight back a lump of throat. Indeed we all have problems. That is not what defines us. How we deal with it is what defines us. You can consider yourself a victim or you can learn from it. Certainly, Indrani sets the bar for me in how to deal with challenges in life.

As I had explained to her in our exchanges, Mr. Thompson’s is not an easy life. He bangs into walls, can’t find where his bathroom is, does not know where the remote is (TV is his sole company)… There are small things that you do not realize till you see them. One day, I saw him struggling to shave. Just imagine trying to put a blade in your razor – much less find out where they are and position yourself in front of the wash basin. But as I had told Indrani, he is determined to make the best of what is left for him. He is 96 and he is the most well dressed person I have seen at that age. Always shirt tucked in, shoes on, hair combed … remember he cannot see himself … but it is like he does not give a darn to what has happened. He is determined to be as normal as he can be.

BTW, I have talked to Mr. Thompson about Indrani and her sentiments for his courage. Mr. Thompson, in return, passed his regards to her. I even carried a picture of him for Indrani.

I learnt sitting at the bar, that as we were going thru these exchanges then, she was starting to make up her mind to leave her past and move forward too. Many months later, I got a message from her that she was going to get married again! She has found this wonderful person but that would also mean she would have to move to Singapore and away from her parents, her mother-in-law from first marriage (who she is very close to), her job, her friends etc… I wished her the best – thought this was a perfect chance to press the reset button and promised to look her and her husband up if I ever showed up in Singapore.

Unfortunately, I missed her husband since he was working late and I was running late for a dinner meeting.

You would think the story would stop here, right? Ah! then you do not know me at all. There is an intersection point behind this intersection point. Remember, I have not explained to you yet where that Ibeeza resort fits in the whole story.

Well, if you go back to a Jan 23, 2013 post in my blog or FB, you will see the story of how I was hosting all my cousins at that resort for a couple of days and while taking some rest by the pool by myself, I thought I saw Suman Das walk past me. Nobody has yet fathomed how two students from tenth grade ever managed to meet in a small resort and recognize each other some 30 years later.

Suman was there for a office party. He introduced me to his wife, mom and son who were there and I posted a picture of them in that blog. He had also introduced me to the rest of his office folks. Many of them had a lot of questions about life in America. I had a great time with all of them!

Who know who was there at the party? Yes, same Indrani!! Turns out it was she who had arranged the whole party!! I have seen her, must have met her but had no idea that it was the same person who became my Facebook friend or was even sitting in front me at the bar. I hurriedly showed pictures from that day on my iPad and she fished out pictures from that day on her phone. They matched!!!! 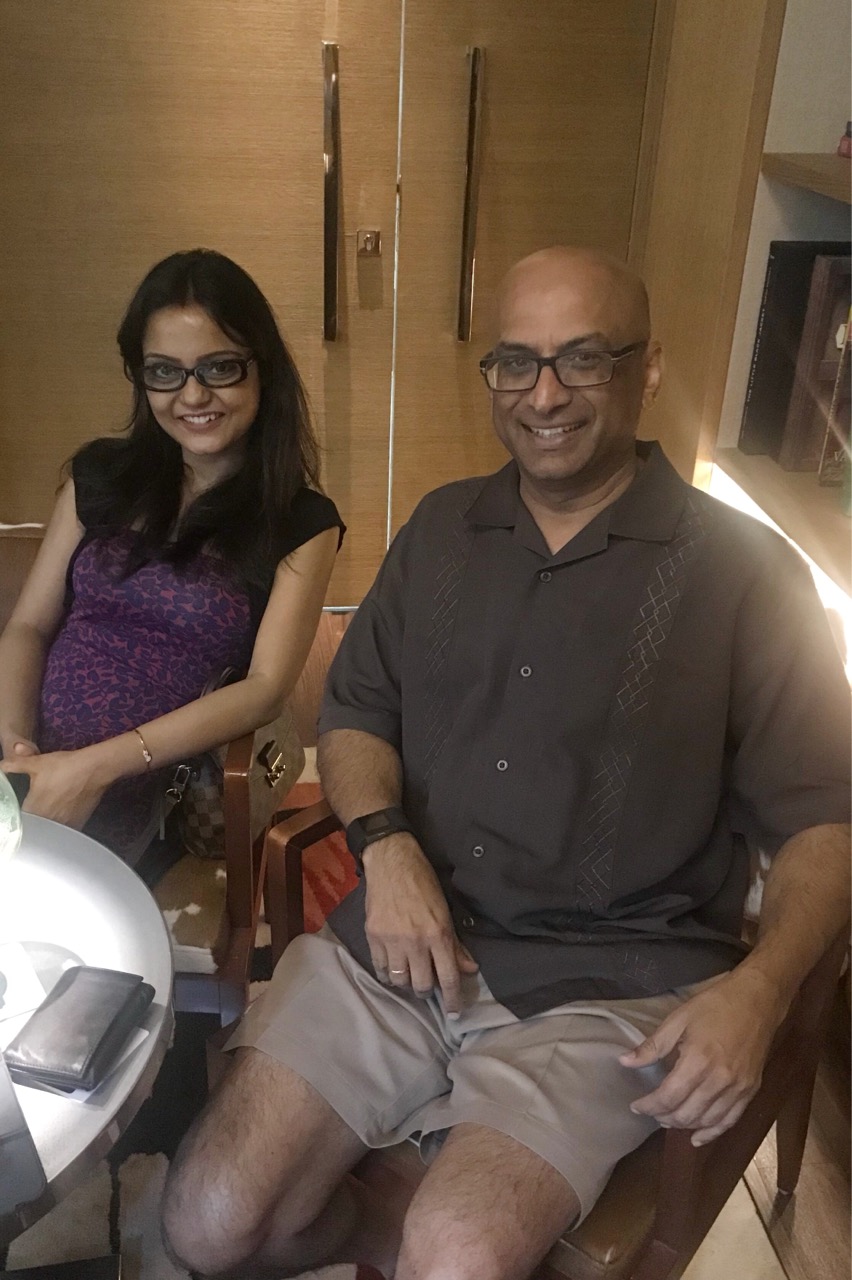