The lunatic has escaped the asylum!!!

Dad was sitting in his bed. The nephews were done with their firecrackers. I was wondering what to do. That is when I got a bright idea (and I take a lot of liberty when I call my ideas “bright”) to see if I can handle myself if I were a patient. The idea was to pretend that I could not move my legs and had to get myself everywhere in dad’s wheelchair only using my hands.

The initial moves within the room was easy. Dad had an incredulous look on his face but he was okay with me trying out different things. (just like in my childhood). Then the obstacles started coming. To get to the balcony, I had to negotiated an inch and a half high separation ridge (which also makes the door way watertight when you close the door). I was just not being able to push myself thru it.

It became a cerebral problem for me. What the weak forearms could not solve, I had to solve by using my wits. As I was thinking about the problem, I flashed back to our eighth grade physics teacher (we called him “Lambda”) explaining to us why pulling is easier than pushing.

And that is really how I stumbled onto the solution. I had to back into the ridge and then with a fraction of the energy was able to pull myself up. Over time I also realized that if I could do this one wheel at a time (needed a wide doorway for that), I could make the problem even easier.

Imagine the scene – totally delighted with myself, I was spinning around from room to room (I was not screaming “Wheeee” though). Then the nephews and niece showed up. That is when it got really interesting. Fortunately, they did not want to try it themselves. I was not in a mood to share my new toy, anyways. But they took a bet with me.

The bet was that I had to get out of home, get inside the elevator, go downstairs, open the complex gate and go out in to the street. No putting my foot down. Only the wheelchair and my hands.

The biggest challenge was squeezing myself into the elevator. The wheelchair barely fit in – the door was so narrow. And then I had to back myself in – because there was a difference in the level of the elevator floor and the building floor.

Long story short – as you can see from the pictures taken by my eldest nephew, the lunatic did escape the asylum. What is more, once on the streets, he put on as high speed roll. Worse, he went “Wheeeee”!!! 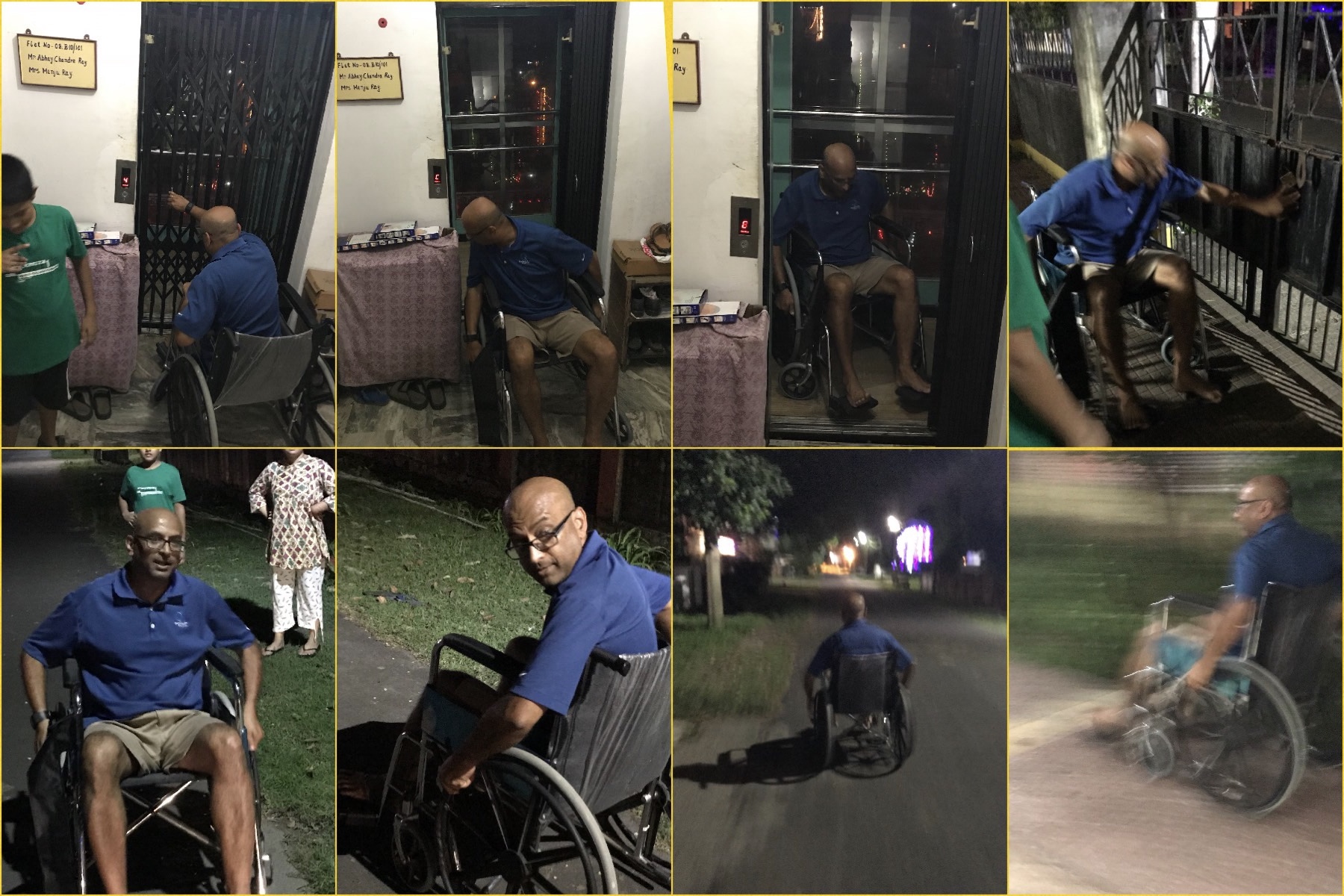