When you realize that wearing shorts can be your calling card…

Two months back, I got a text message from Joyjit sitting in a plane that his dad had passed away and he was headed back to Asansol. Barely a couple of weeks back, Joyjit, Baisakhi and myself were discussing the worrisome condition of both their dads.

After offering him any help he might need, we agreed to touch base after he would reach Asansol. For the next couple of days, I was texting him regularly in terms of anything I might be helpful with and also enquiring after his mom. He let me know that she was being very strong. Somewhat relieved, I let him know that I would visit his mom during my next trip to India.

Apparently this is how the discussion went between him and his mom later (as described to me by Joyjit himself).

“Ma, ekdin Atlanta-r ekta chhele aasbey tomar saathey dekha kortey. Matha shave kora aar ektu paagla type-er”.
(‘Mom, there is a friend of ours from Atlanta that will visit you sometime. He is a little of his rocker and is clean shaven in his head”)

Before, he could help her with any more details (as if a clean shaven head “paagla type-er” guy in Asansol needs any more definition to be singled out 🙂 ), I understand, his mom jumped in “Jaani Jaani – half pant porey ghurey beraay to?” (“I know, I know. He is the guy who goes around in shorts, right?”) 🙂 Turns out, she had seen me once in Atlanta – I believe it was the house warming ceremony of Joyjit and Baisakhi’s house.

As you can imagine, I needed no further introductions when I rang the bell at Mr. Mukherjee’s house after about a four hour car ride from my parents’ place.

I overstayed my self-allotted time but it was totally worth it. It was very very interesting for me to understand the big change in her life she was going thru. She lives by herself in a big house that she has been living for a long time. And now, there are a lot of questions to be thought thru for the future.

When I asked her “How are you doing?”, she went on to very analytically explain how she was trying to deal with changes. It was a pretty methodical analysis of how a sudden disruption to a 49 years marriage is something she had underestimated. She talked about so many things one takes for granted when you are wth somebody for that long and that you have to learn one step at a time on how to fly solo. There were some great moments of reflections – and certainly I learnt a lot.

I did get to know a lot about her background, her upbringing and the common journey with Mr. Mukherjee. Of course, we also spent quite some time talking about our two Sunday morning running group participants – her two young and very cute granddaughters.

I was not very keen to leave as the sun started setting in Asansol. I could have gone for a few more hours but there were miles to be driven and people to be met still…

One great parting point – she is applying for a US visa to stay with her son and family for a few months to recuperate herself. Which means, I will have a lot of time to get to hear the rest of story. 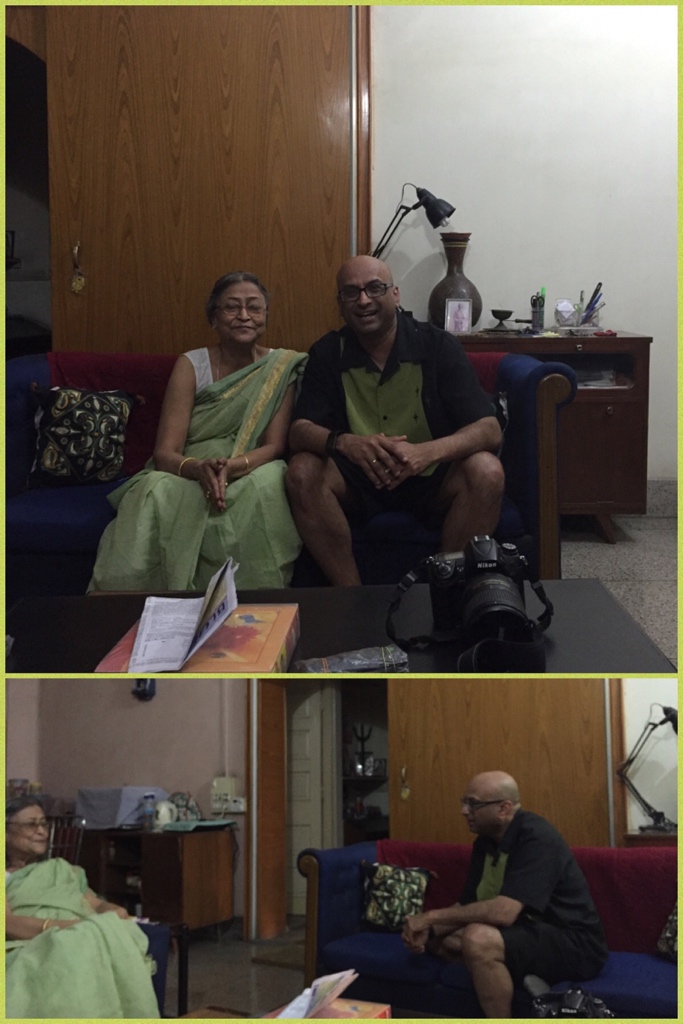