The angle that Newton missed

It was house full last night. It was my third and last night at my dad’s place. The nephews had come over since their midterms just got over. The whole evening was total fun and commotion. A sample here:

One of the time tested routines for my dad when his grandkids get together is to sit with them and ask them random general knowledge questions. Somehow the kids really enjoy it. It does not work as well on my kids since my dad cannot understand their accent any ways. I remember how Nikita had taken fullest advantage of that once and after every time he would give out the answer to his own question, she would say very slowly and loudly “Yes, and that is what I said”. My dad, partially out of gullibility but mostly out of his pride that his little granddaughter from America was so smart would readily accept her statement.

Last evening, as you can see another such episode occurred. At point, my dad asked “Rishu, bolo to, gachh thekey ekta aam jodi porey jaay, kon deekey jaabey seta?”. (“If a mango falls from a tree, which direction would it go in – up or down?”. My youngest nephew, who was the subject of his question nailed the answer.

“Eta prothom ke dekhechiilen?”, he continued asking him. (“Who observed this first?”). He was obviously trying to teach him about gravity. However, my youngest nephew was not aware of all this. So, my dad asked his elder brother who answered it correctly – “Newton”. Well, technically, I am sure there are thousands and thousands of undocumented cases of human beings before Newton who had seen a mango fall, but this was one of those cases where you are expected to give the answer that the teacher expected, not necessarily what was technically correct.

And then came the kicker question – “Can you explain why?”. If my younger nephew did not know about Newton, there was very little chance that he understood gravity. But he was already smarting from the fact that his elder brother showed him up. So, he thought for a while. And then somewhat himself unconvinced – as you can see from his mischievous smile – he offered -“Keno? Aamra kuriye khaabo boley!” (“So that we can pick them up from the ground and eat them”) 🙂

Coming to think of it, he had a point there. It would be conceivably impossible to pick fruits off the ground and eat them if they started meandering away from the earth willy nilly after getting separated from the tree.

Class was dismissed following a loud guffaw from the granddad while he focused on telling the funny story to everybody who was getting near the porch we were sitting in. 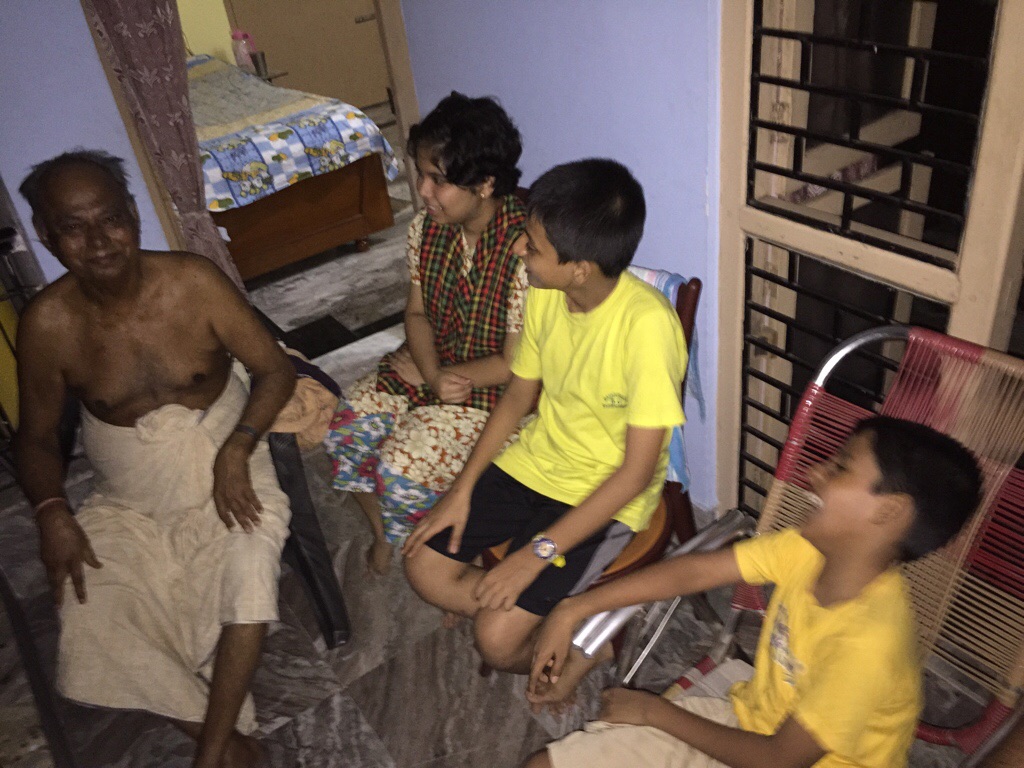