How to enter US

My text messages updating Sharmila on my status

Pretty much a step by step instruction on how to enter the country!!! 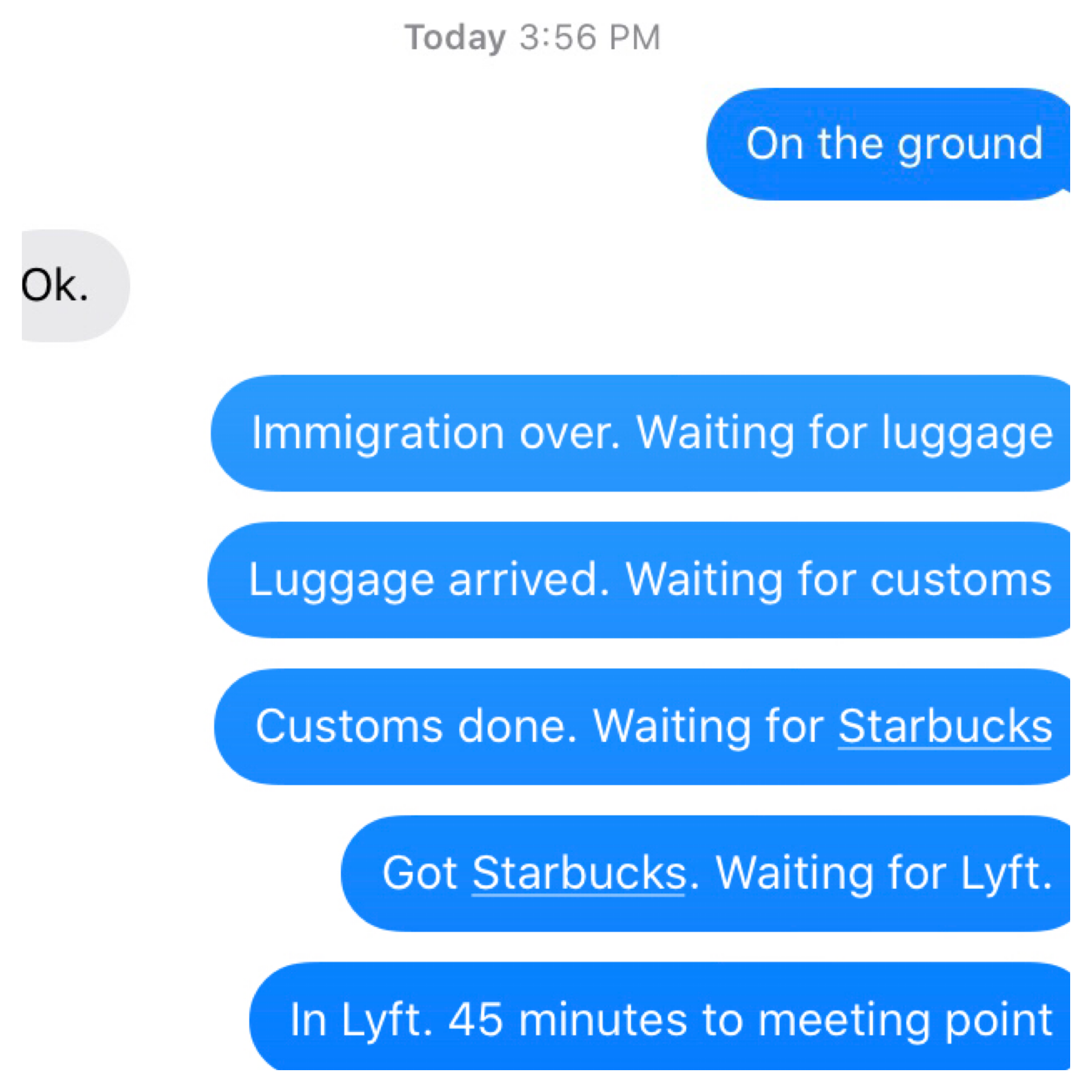 Almost did not make it

“I cannot give you a visa to enter the country”, the immigration office assured me.
“Why not?”, I asked
“Well, your next flight is in three hours. The rule is six hours.”

That was a bummer. I had not expected this. I was hoping to see Natasha Balseca after quite a few years. In fact, if I managed to meet her, it would be the third time I would have met her.

The very first time was somewhere around 2008/2009 time frame when on a dark morning at 5:10AM, Samantha (or was it Lara?) had introduced me to Natasha when we all showed up at the running group’s starting point on Windward Parkway.

I had learnt that Natasha lives in Ecuador and was in Atlanta to teach at a school for some time. Eventually she left for Ecuador but we kept up thru Facebook and birthdays. Then one summer, about 5 years back, she was back in Atlanta to teach some summer school. I met her up that time and we again put in a run, this time near Windermere Parkway. Since it was one on one, over Starbucks coffee, I got to know about her whole life story. And the fact that one of her cousins is in Galapagos. Which is some place Sharmila and I want to go to. Good to know that there is somebody we can reach out to.

That followed a couple of years of mostly Facebook and birthday contacts only. She then moved to Doha, Qatar with her family as a teacher. Funny thing is that I go thru that airport eight times a year but never managed to get out and meet Natasha. My connections are usually 2 hours or less.

This time, from Kolkata, I was headed to Muscat. I had a little over 3 hours. I was determined to meet her. In fact, I had asked her to come in her running clothes. I traveled in my running shoes and had my running clothes in my backpack. If we could figure out a way to run outside the airport without drawing the attention from the security guys, that was what we were going to do. 3 meets – 3 runs.

Except the immigration guy had other thoughts.

The good news is that after about five minutes of explaining my situation, I was able to convince him to give me a temporary visa. Phew!!!

As I came out of the customs area, I texted Natasha “Coming out” and started scanning the waiting crowd carefully. I was looking for any woman by herself in running gear. II did see somebody vigorously waving at me. She looked like Natasha all right but she was with somebody else. I looked behind me – there was nobody. So, it had to be Natasha.

Turns out Natasha’s mom – Gina – was visiting from Ecuador. Natasha had dragged her along. We decided to give running the boot and instead settled down at a tea shop to chat.

It was great to meet Gina for the first time. She was born in Virginia, married an Ecuadorean, had Natasha and then moved to Ecuador.

And I was thrilled that I was able to finally see Natasha after promising her every time I passed thru Doha that some day I will make it. Found out that Natasha is gearing up for a half marathon and that she has taken up rowing.

Thank you Natasha and Gina for coming to the airport and spending the time. One of these days, I hope we will put in a run together. 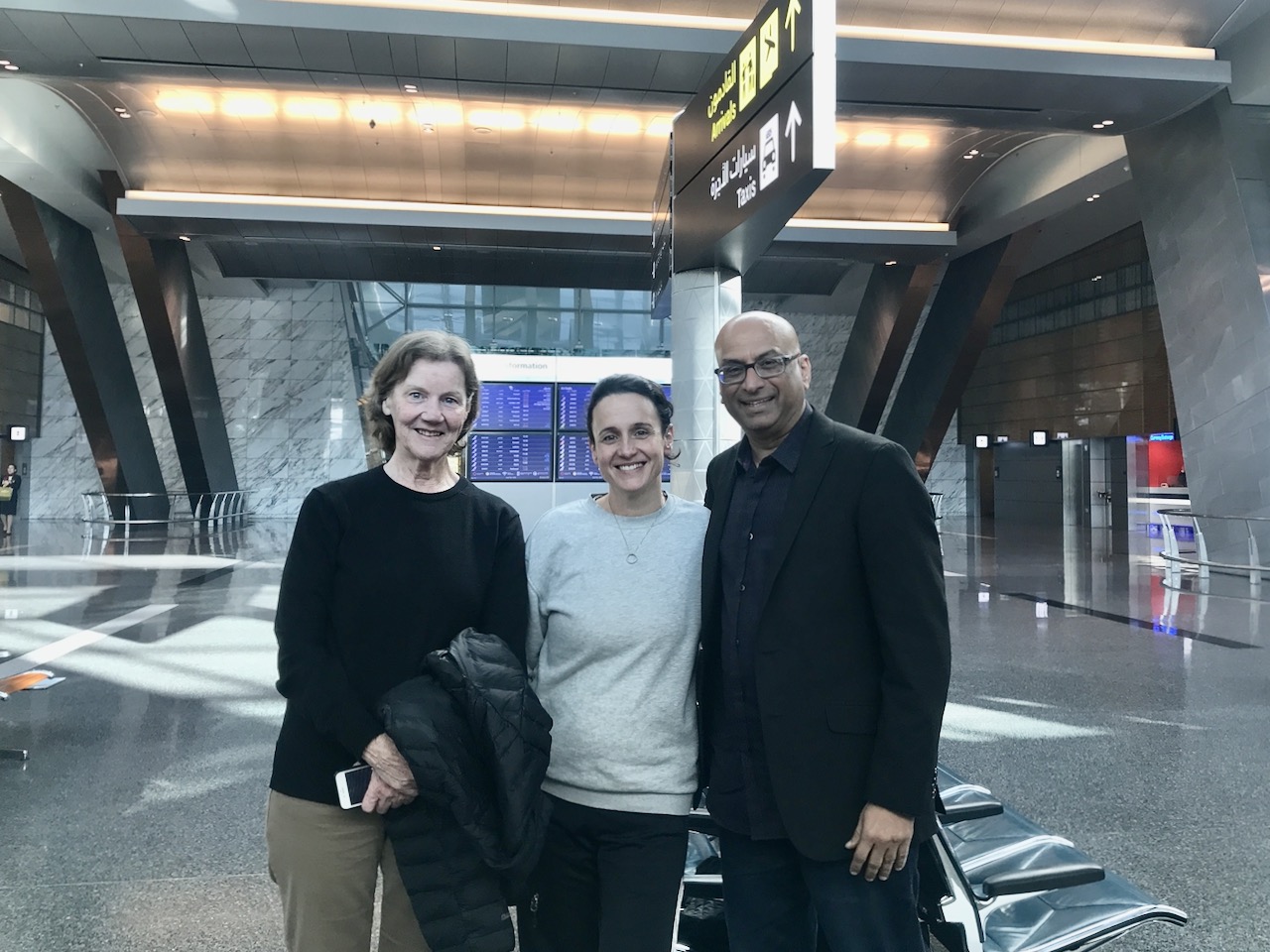 One last look at Muscat

The Gulf of Oman behind.
The city of Muscat in the middle.
Yours truly in the front! 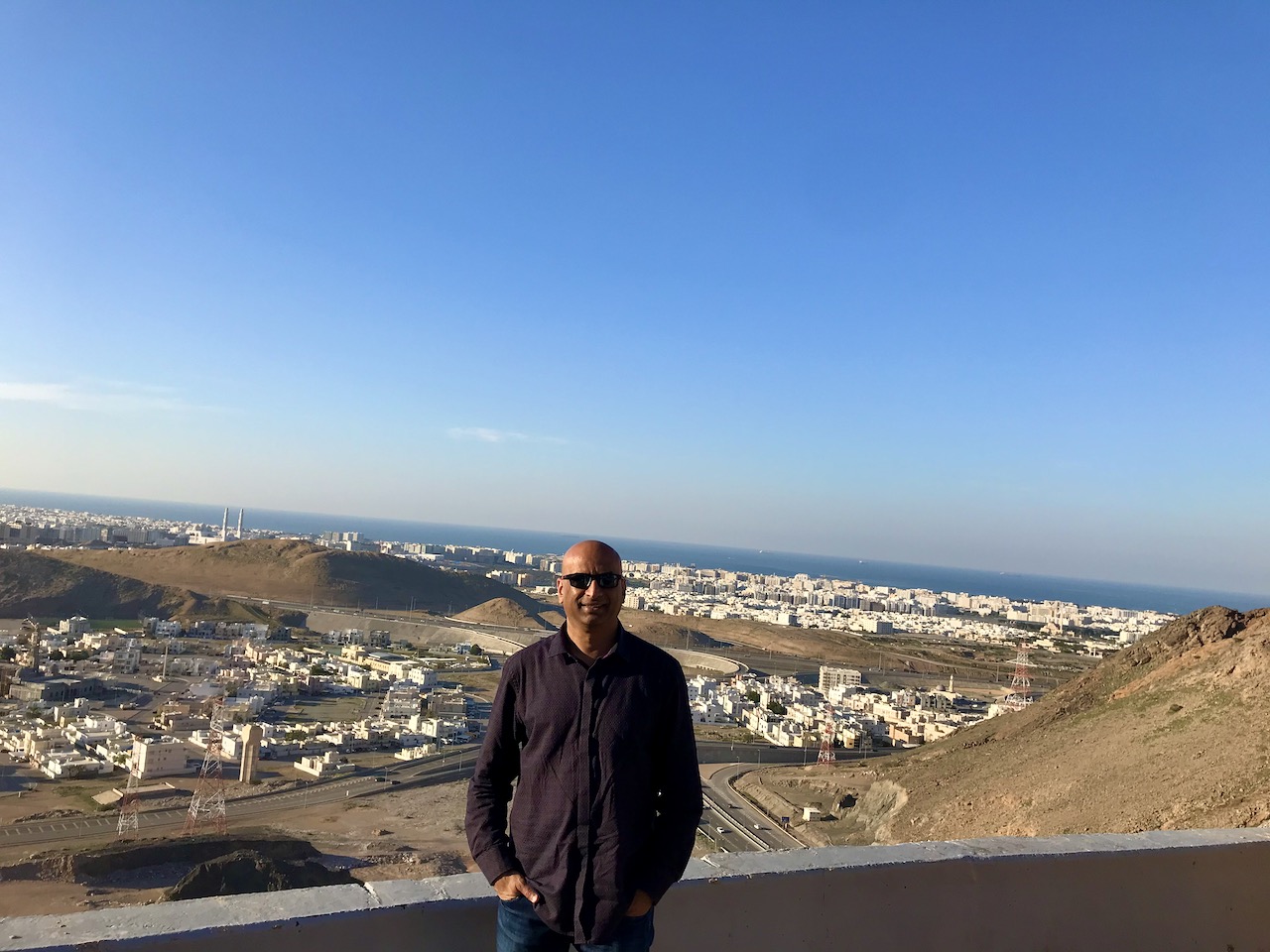 Category: Vacations | 1 Comment on One last look at Muscat

From the bottom of the sink hole…

To get an idea of the scale, check out the folks on the top of the rim… 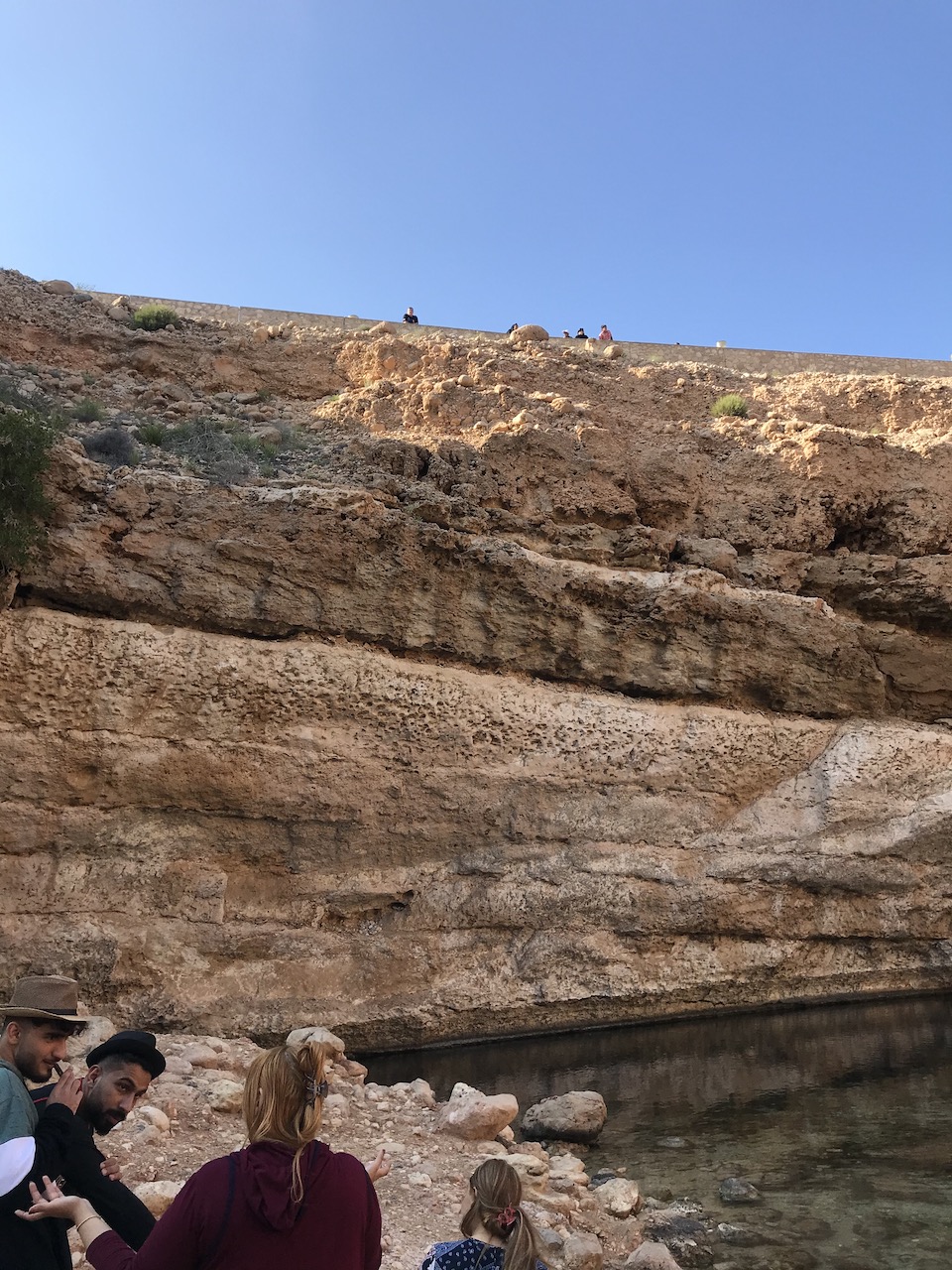 After Wadi Shab, we headed towards Bimmah Sink Hole. This is a nearly 300 feet hole created not too far from the Gulf (you can see in the picture). In fact, there is a small tunnel that joins the Gulf to this sinkhole and that is where the water comes from.

While the locals would have you believe that a meteorite caused this sink hole, in reality, it was created by a collapse in the limestone thru constant erosion below. (Once again, who knew there are limestone rocks in the desert country of Oman?). 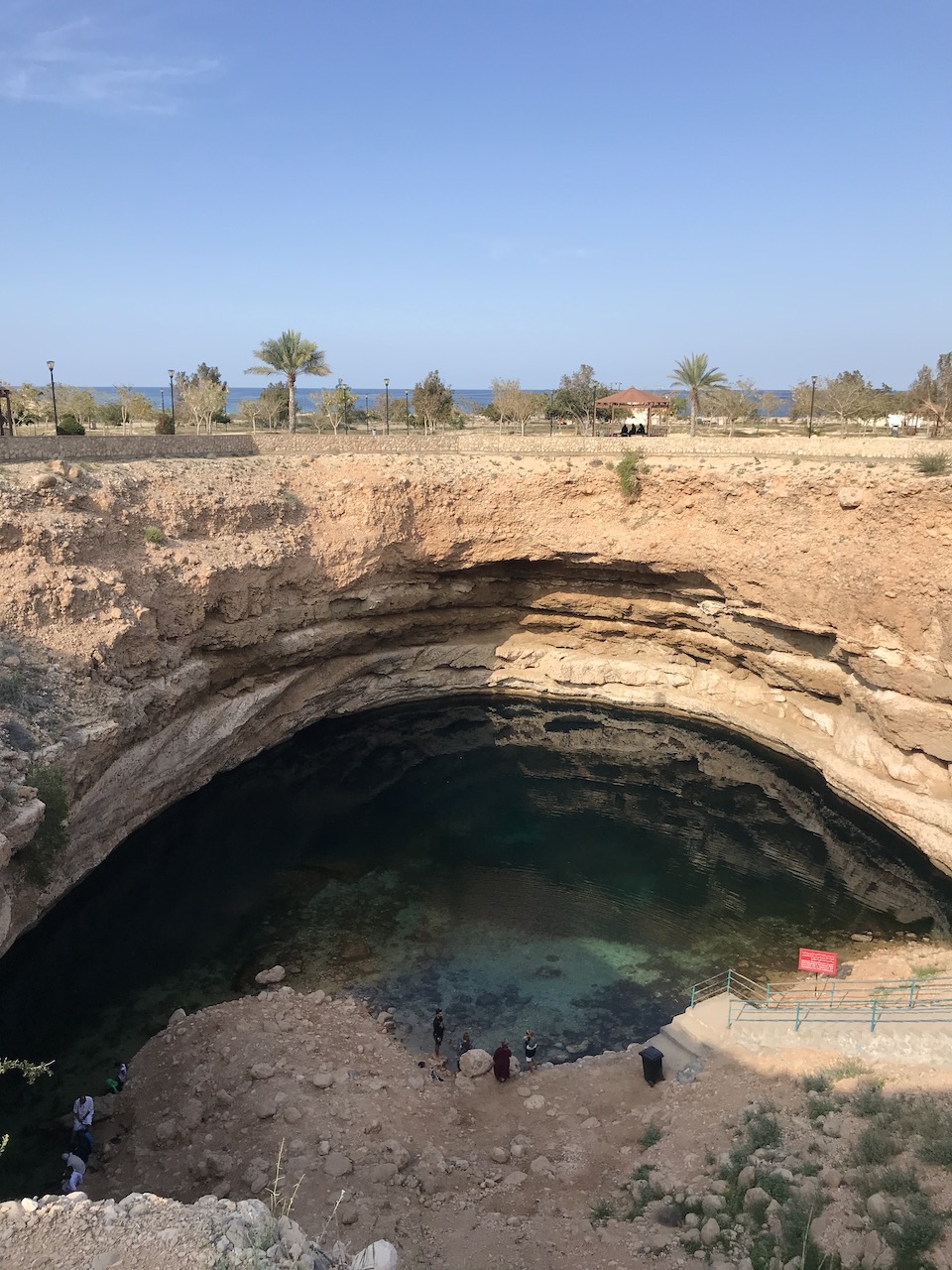 Unfortunately, I did not have change of clothes. Else a dip in the cold water would have been the perfect reward for the tricky trek. 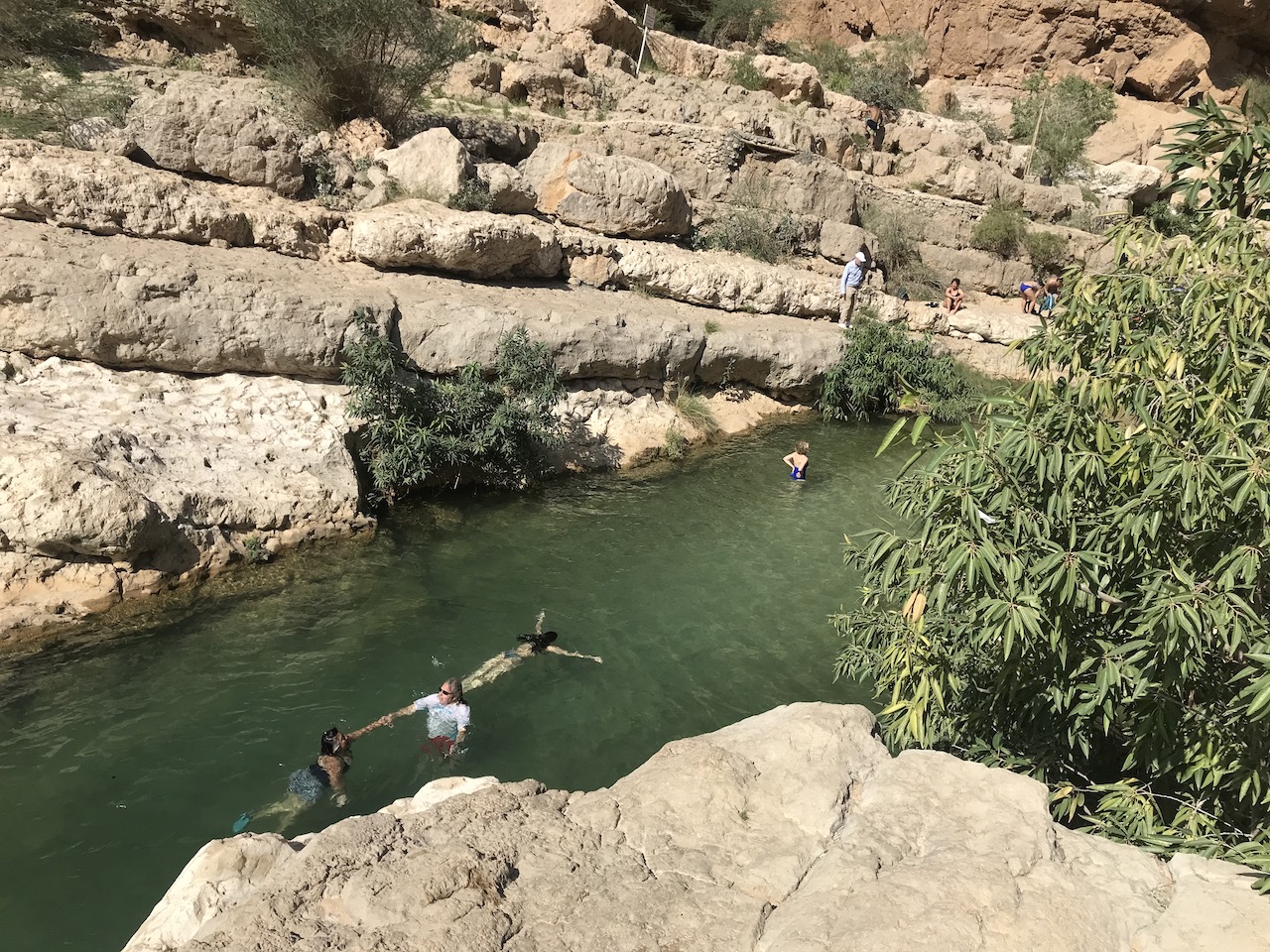 Where there is an ocean… 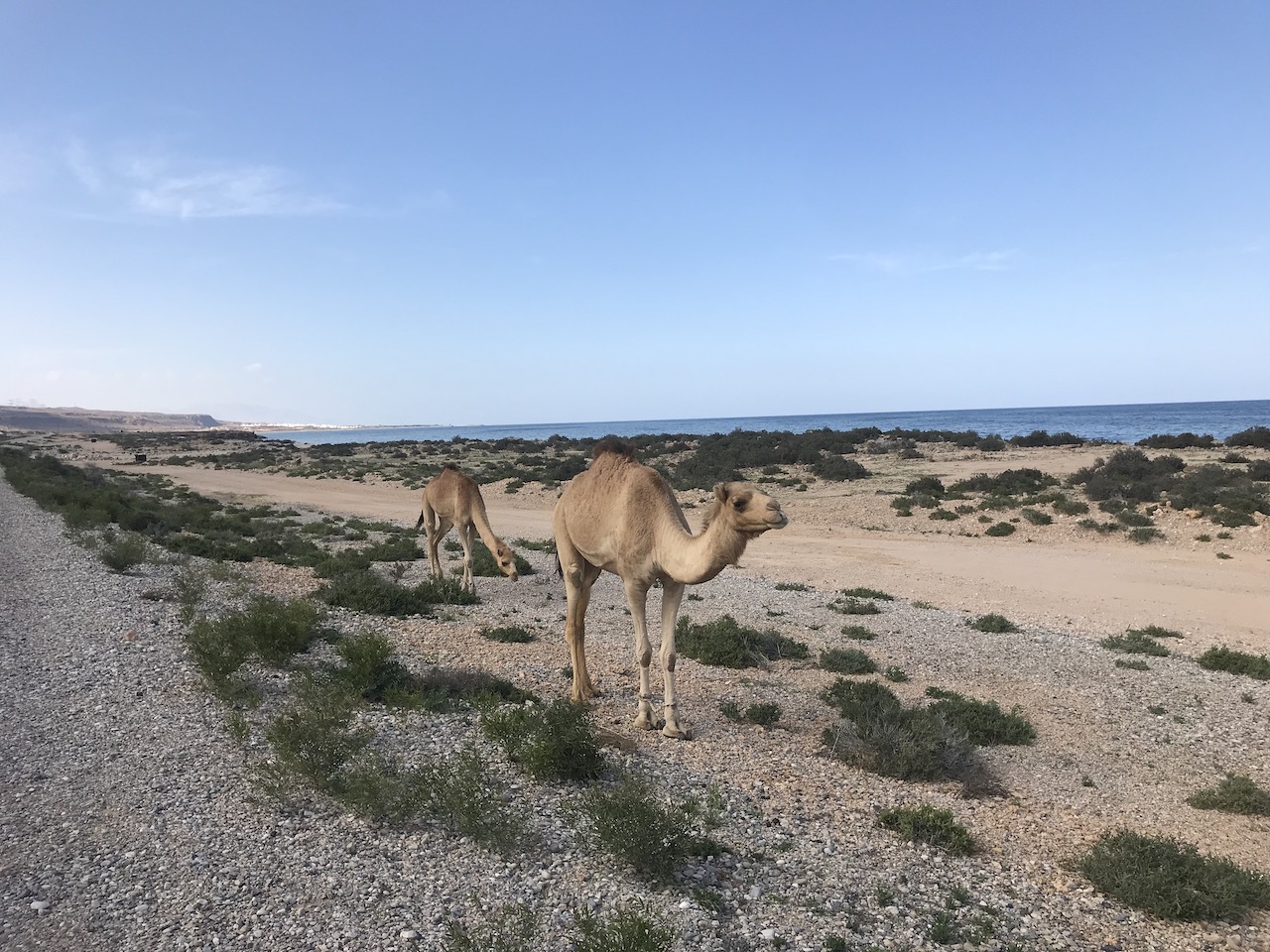 Reminded me of a trek thru a valley in Mongolia

Roger, when are we hitting the roads again? 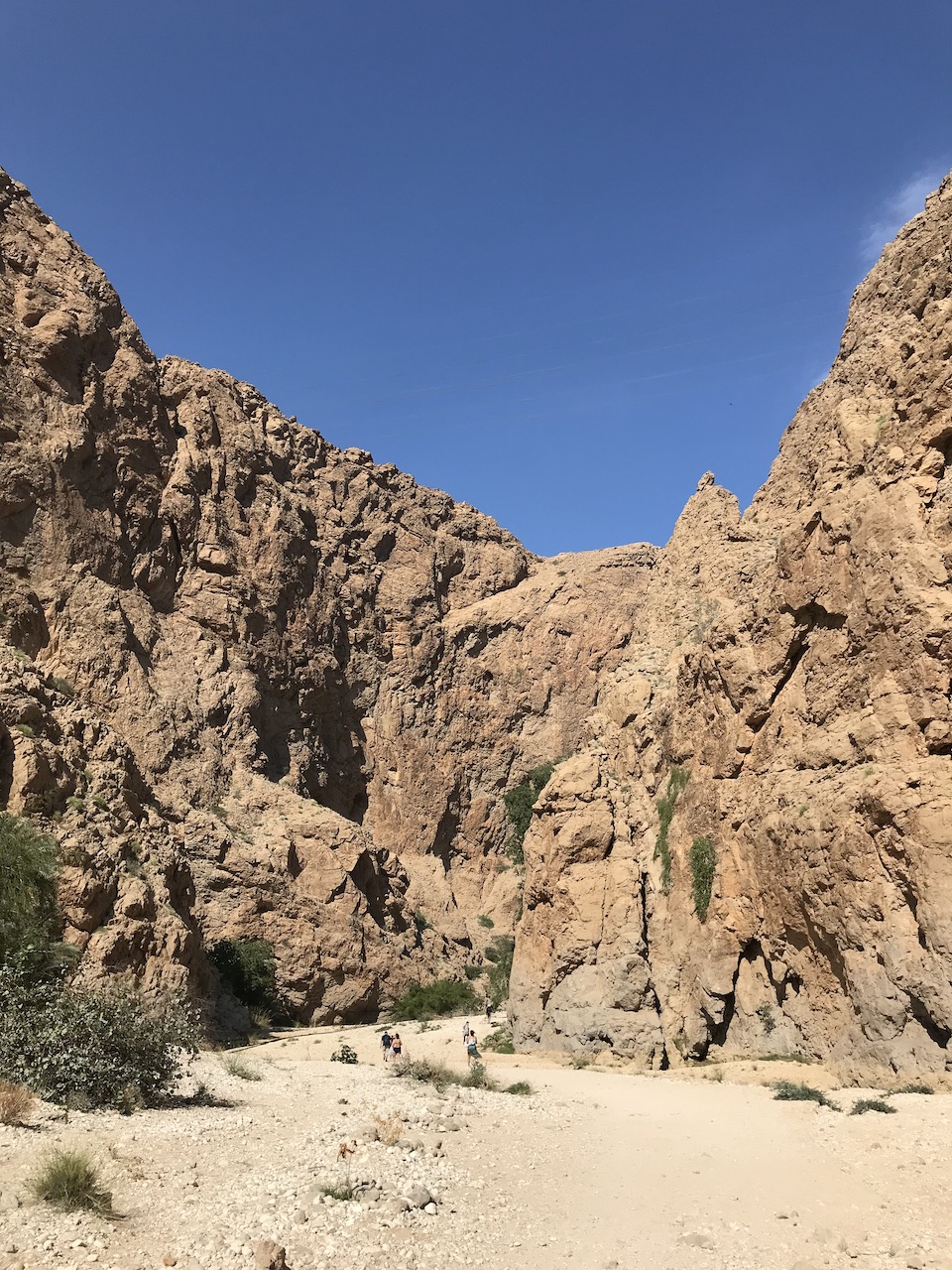 Some parts of the trek was scary. There were a couple of areas only one person could squeeze thru. One wrong step and it would be a steep fall. There were spots that some folks were too scared to cross backing up the line behind.

Unfortunately, I did not have proper shoes on. And I was afraid of my ankle rolling. If I had known this would be involved, I would have come in shorts and half shirt.. 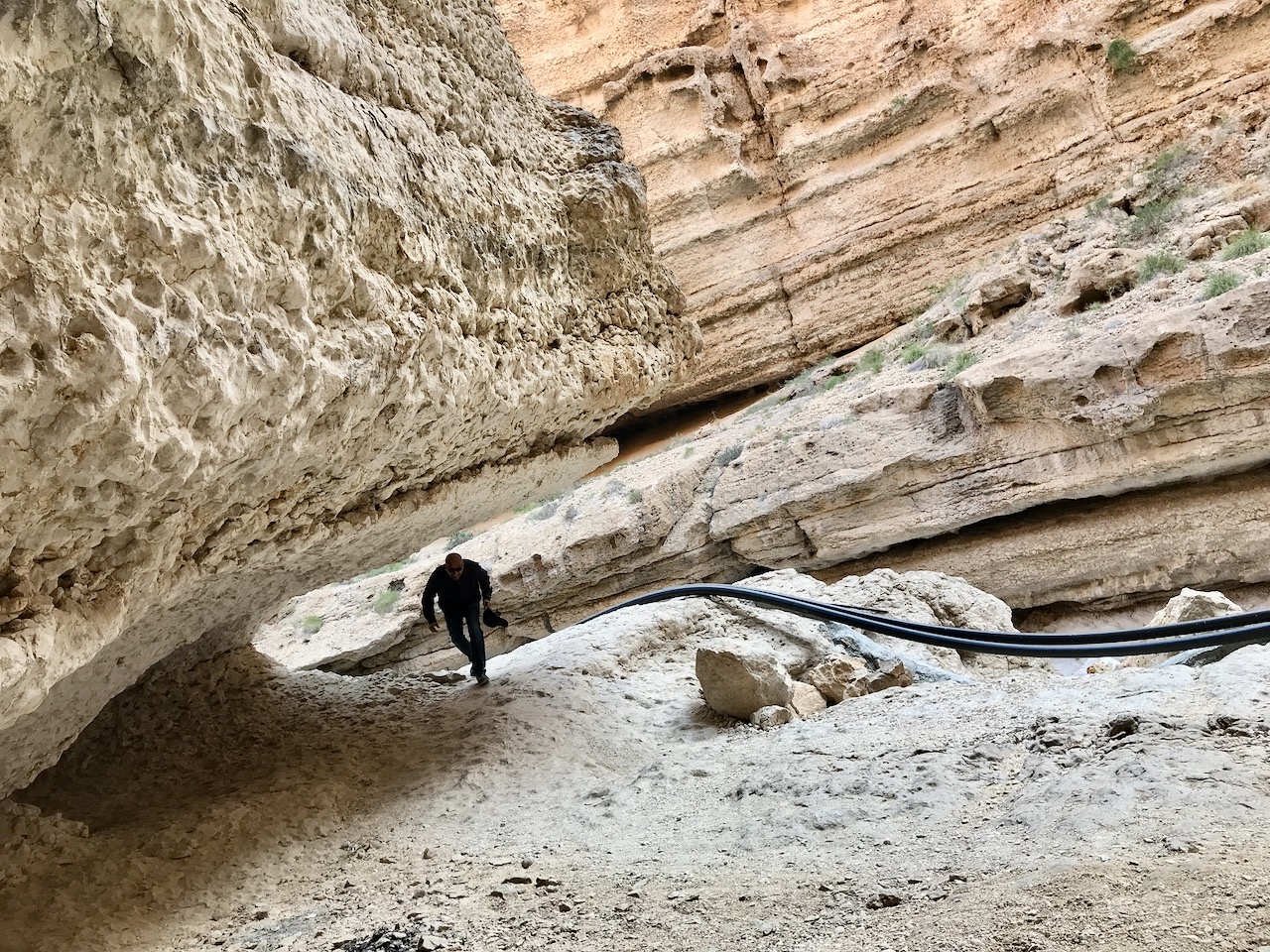 Soon the wide path ended and there was no… well.. path. One had to constantly negotiate stepping over rocks and stones but the one thing that kept anybody from straying was vertical walls of the mountains on either side. 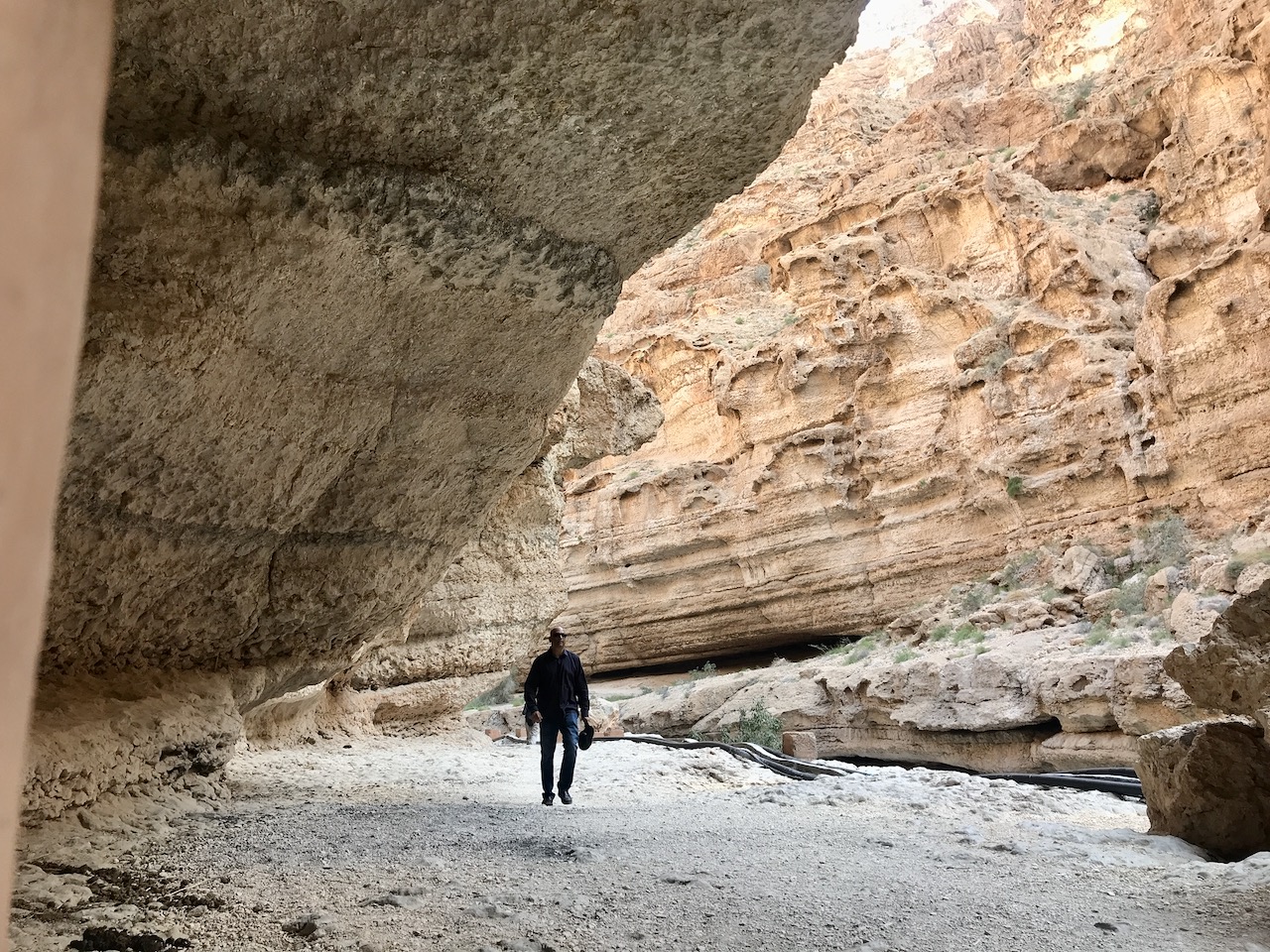