Of Duke, Diana and Nice biscuits…

If words like Duke and Diana make you feel that the roots of the story lies somewhere in England, you would not be totally wrong.

Let’s go back a couple of days:
I was in Frankfurt airport lounge when I got a message from Anna – who lives in London – that she had seen my FB post of going to India. And that she would be headed to Kolkata to check on her mom too. She was curious if it would be possible for us to meet. If we did that, we would be seeing each other after about 32 years. I told her that I will give my best shot at it since that would give me an opportunity to see her mom too.

Let’s go back a little further. In fact about couple of years:
I had written a FB message to an Anna Mitra saying that I saw her post a comment on Anannya’s post. Looking at her profile picture, I had to ask her – “Are you Diana? If so, would you remember me? I am Rajib – your cousin Mem-didi’s friend from Durgapur. I used to play badminton with you and Simi (Anannya) when you were barely seven or eight during your visits to your uncle (Dubey-kaku) in Durgapur”. Fortunately Diana (aforementioned Anna) made no pretense of not knowing me even after recognizing me 🙂

That day, I got an update on her brother – Atanu – who was called Duke and her dad and mom. The sad news was to find out that her dad was no more. But the good news was that I still had a chance to meet her mom (we called “Pisi” since that is what my friend Aditi – the above mentioned Mem-didi – called her.)

Now let’s take another step back in time. About 34 years from today:
I was in a residential school near Kolkata. My friend Aditi studied in a school in Kolkata and she stayed with her aunt (“Pisi”). Both of us were studying hard those days to get into engineering schools. She was more talented than me – she cracked the engineering exam as well as the medical exam – I stayed with only the engineering exam.

Not sure how it works now, but those days, there were two very renowned tutorials by mail to help you get prepared for the engineering exam – Agarwal’s and Brilliant Tutorials. To split the costs, Aditi and I had worked out with our parents that I would buy Agarwal’s and she would buy Brilliant’s. And then about once a month or so, I used to catch 218/B bus to land up at Pisi’s place to exchange our materials.

Duke and Diana – who were very young then – always used to come and chat with me and after some time Pisi would shoo them away and ask them not to disturb us. (Aditi and I often had to ask each other for help if one managed to solve a problem and the other did not. That was probably not a very accurate way of portraying the true picture since I was the one who always needed help).

But the best memories from those days? The cup of tea and Nice biscuits that Pisi always served me. I am not sure if you get Nice biscuits any more – but they were coconut flavored rectangular biscuits with serrated margin. The best part was the twenty or so pieces of sugar that used to be somehow attached to the top. I am salivating even now remembering how the first bite used to taste. The only essential problem to be solved was whether to dive into a bite straightaway or dip it first in the tea!!

Now let’s try to time-warp all those timelines together:
When you do that, what you get is a room full of people together – some from my past and some I saw for the first time. Almost like those get togethers before – except fast forwarded by a generation. Got to see Duke and Diana after such a long long time. More importantly, got introduced to their kids who were absolutely charming. Discussing studies with Dipanjan on one hand and then talking to Ahona (little Olivia) about the cute street dogs and goats on the streets of India – that was just a nostalgic throwback to over three decades back.

Incredible part though was getting to see Pisi and thanking her for all the care she used to take of me when I visited her.

The time went by too quickly. Maybe Atanu, Anna, Dipanjan, Dipannita or Rina, you can help me fill in the details… all I remember is I was talking loudly and somehow we were all laughing constantly!!!

Let’s not wait for three more decades to laugh together again. I know for a fact nobody would want to hear a octogenarian Rajib talk loudly 🙂 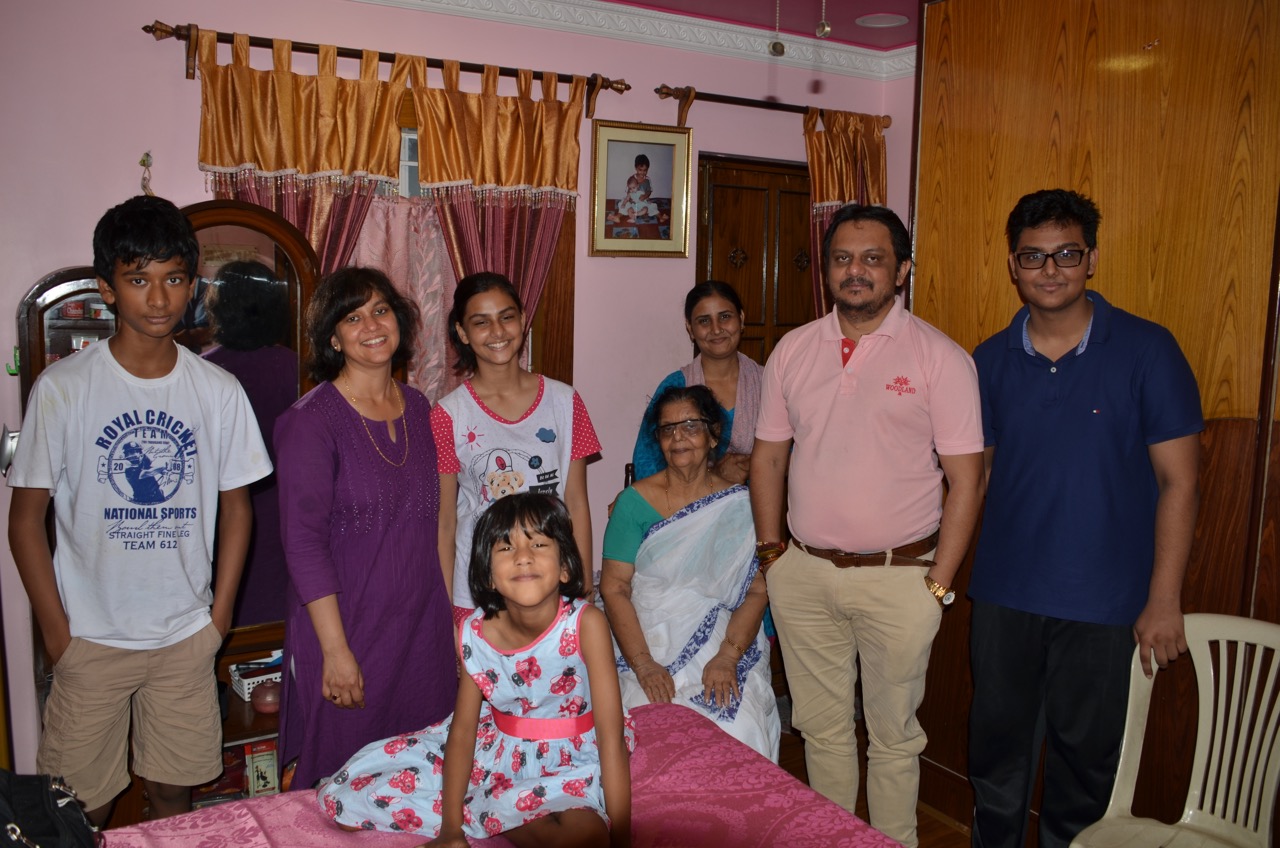