He fell for it. Hook. Line. And Sinker.

If you have followed the last post, you know the context by now. In short, dad came and joined me and my brother in the balcony this morning. He came by himself in his walker and sat down – completely unassisted. It was slow but he did it. Of course, we were delighted that he is being able to win small wins in his long journey to be back to what he used to be.

Speaking of what he used to be – somehow the topic came to money. Wait a minute, I know exactly how. He was the one who lost no time in starting to complain…
He: “Boddo paisa khorcha hochche” (Too much money is being spent)
I: “Keno?” (Why?)
He: “Kaajer meye. Physiotherapy. Eto kichchu dorkar nei”
As I had predicted, he wants to get rid of the help at home and the physiotherapy because apparently we are spending too much money on them.

I: “Taaka ki tomar sesh hoye jachche?” (Are you running out of money?)
He: “Chinta hoy” (It worries me)
I: “Joto taaka-i hok tomar chinta jaabey na”
I assured him that he is never going to stop worrying regardless of how much money he had.

After some more time…
He: “Tumi maanchho na. Kintu taaka na holey konodin sukhi hotey paarbey na” (You may not agree but you cannot be happy without money)
Okay. Now he is getting into a territory that is totally my passion zone. I was not going to give in easily.
Me: “Mote-i na. Beshi taaka kaukey sukhi kore ni. Aar korbey-o na. Je sukhi se olpete-i sukhi. Aar je sukhi noy, se joto taaka-i dao kokhono sukhi hobey na”.

Basically, I was trying my usual line of more money cannot make you more happy. These are independent (for the most part) attributes. One can be happy with little. One who wants to be unhappy will be unhappy regardless of the amount of money.

He continued with his protestations that you need money to be happy.
I even conceded that money is important. But I challenged him to come up with a number that will make him happy. In fact, I asked him to think what that number would have been if I had asked this question when he was 30, 40, 50… and if he ever got to that amount of money.

Realizing that I was not going to get a convert, I went for the dramatics. Quickly, I laid out a plot and led him thru that…
Me: “Ami ekjon ke jani jaar $$$$ poisa aachhe. Se tate-o sukhi noy”.
I told him about somebody I know who is still not happy after having $$$$ money. Well, except $$$$, the exact number I gave him is pretty much all the money he (my dad) himself has.
I was stunned he did not realize what I was setting up. Worse, my brother did not catch on to it!

He: “Tai hoy naaki?” He was incredulous! He would not believe me!!
Oh! This was going to be interesting.

Me: “Yes. Aami oder bhalo korey chini ” I assured him that I know the person very well.

After some thought, he said “Taholey oder poribaar-e kono problem aachey”. He surmised that then the person has issues at home.
“Like what?”, I asked.
“Swami-stree te hoyto kono complication aachhey”. He figured my person was not happy because of some spousal issues.
“Dujona-kei aami bhalo korey chini. Holof korey bolchhi, kono jhamela nei”. I assured him again that I knew both the husband and wife (ha ha) and there were no problems between them.
“Taholey chhele meyeder saathey monomalinyo aachhe”. At this point of time he was clutching on to any straw. He suggested that my friend had problems with his kids.
“Ekdom na”, I reassured him again.

I had noticed that my brother had started smiling.
“Bujhechis?”, I asked softly
He nodded quickly indicating that he had realized what I was doing.

“Do me a favor”, I said very softly. “Let me get my phone camera on him and then you break the secret to him. Let’s see if I can capture his reaction”.

Once I had my iPhone set on my dad, my brother started..
“Kaar katha bolchhey dada?” (Who is he talking about? – he asked dad)
“Ki kore jaanbo? Dadar bondhu”. Dad pleaded complete ignorance since it was my friend.
“Kaar $$$$ taaka aachhey?” My brother asked him if he knew somebody who had that aforementioned amount of money.
My dad was still confused.

My brother slowly reminded him of our discussion – “What has he been saying? Somebody he knows very well. $$$$ money. Is never happy with money. Who do you think?”

Precisely at that moment he realized that I was talking about him all along.

What followed was a loud guffaw and myriad of facial expressions as I kept snapping his picture on the phone.

Finally I selected two of the pictures for this post that I think tells a great story… The first one was exactly at the moment when he realized what the joke was. And the second one was when he had re-processed the joke and realized that it was on him all along. That “You-got-me-good-on-that-one…I-fell-for-it” – look! 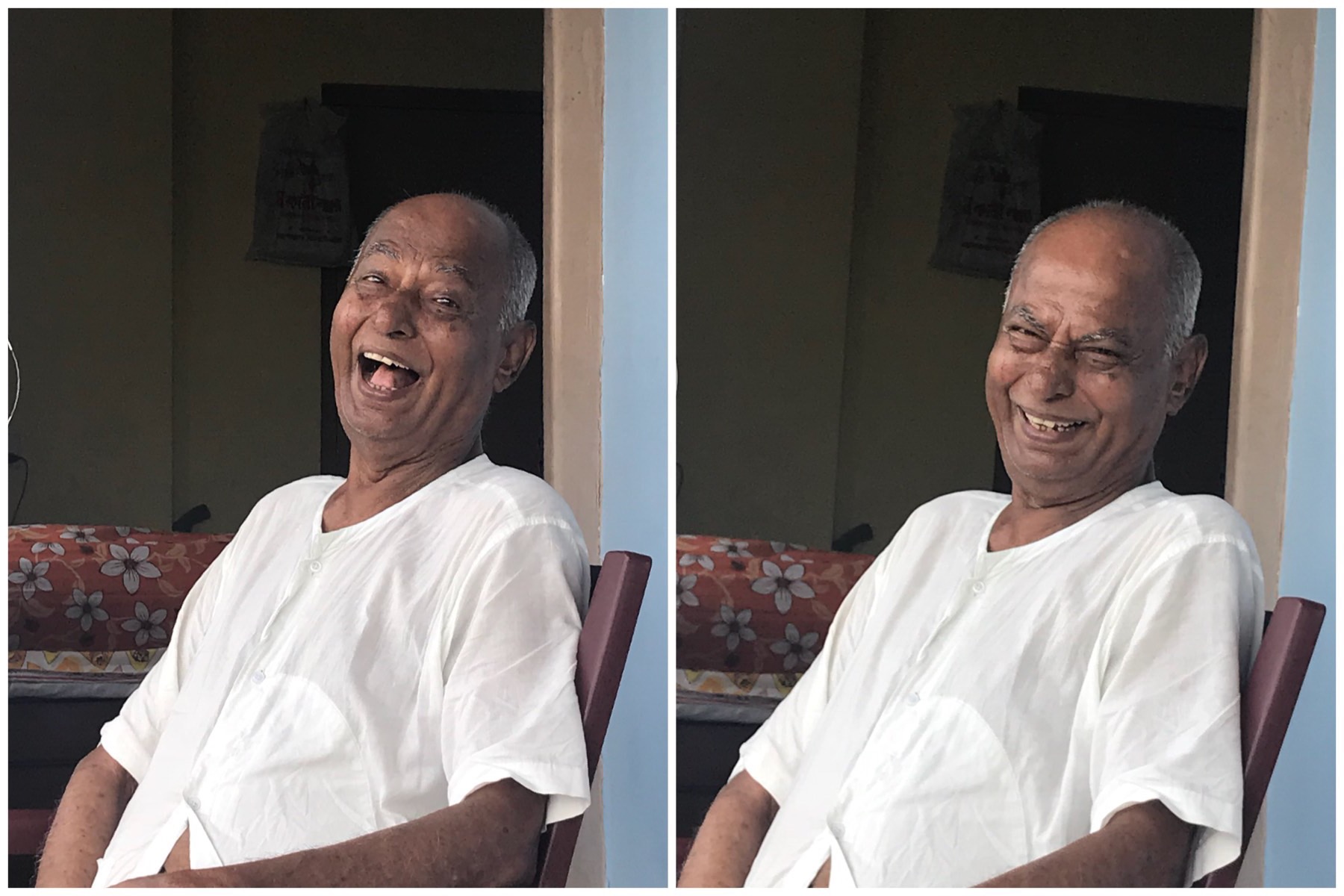