That was (almost) a new side to my dad!

This morning’s three hour long conversation with dad (he spoke most of the time) was a little eye opener for me. Usually, the conversations become so negative about general state of affairs or a littany of his worries for my brother and sister that I politely find some excuse to do something else after fifteen minutes or at least attempt to force a change of topic abruptly.

Today was somewhat different. In fact, this trip has been somewhat different. It started the usual negative way. It was about he not wanting to live any more. Why are other young people dying and not somebody like him who is ready to leave now? But quickly he gathered himself and looked at me and said – “You are the eldest son of the house. After my death, you will be in charge. Let me tell you my three wishes after death.”

I was pretty sure he was going to bring up a few topics known to irritate me but I hung on. And I was glad I did. I learnt something.

Point 1.
“Do not do any ceremonial things after my death”, he said. “Just cremate me and next day each one of you go back to your office and school. There is no need to call all relatives and friends and go thru the motions of shraddho”. (This is part of Hindu rituals after somebody’s death). “I have had a good life and there is nothing sad about me leaving the world. Don’t even try to shave your heads.” (again, this is a Hindu ritual for sons when their dads pass away). And then looking at me he said “Oboshyo, tomar byapar-ta alaada”. (‘You, of course, are a special case :-)’).

I was internally going – “Now we are talking”!! I absolutely believe in what he said. He had a humble beginning and did what most folks always dream of – raising three successful kids and their families. He overcame a lot of odds in his life. He certainly set an example to three of his kids. When he leaves us, we can say with certainty that he was absolutely ready to. He fought hard till he could live life in his own terms. Such is a life to be celebrated not mourned after he passes away. I will drink to that!

Point 2.
“With the money saved from not having to do all the perfunctory ceremonies, donate that money to Mother Teresa’s orphanage”. He went on to let me know how in his ripe old years, he has come to the conclusion that we do not do enough about orphans. He asked me rather rhetorically – “Those kids, at least the orphanages will take care of them when they are very young. After that what? How are they going to get a chance in this world. Our own kids, after so much money spent on education cannot find jobs. How are those kids going to eat? Who is going to take care of them?”

He then told me about an incident that has come back to visit him in his memories repeatedly over the last few years. The one time he went to America, apparently, Sharmila had taken him to a Walmart and there he saw a couple with four kids. He was confused why two of them had the same skin color as them and the other two were completely different. Sensing his confusion, Sharmila had told them two of them were adopted. That is why they were different but calling “dad” and “mom” to the same persons.

As an aside here, I need to mention that adoption runs in our family too. In fact, my niece – who you saw having “foochkas” with me yesterday is adopted. My sister and brother in law adopted her from Mother Teresa’s orphanage after their natural process of having kids did not yield results.

Reminding me of my sister, my father continued “Your sister adopted because that was their only option left. That family I saw in America – and it has taken me a long time to process this – did not do it because they needed to. They did it because they wanted to. Giving a kid – with an otherwise assured dead end – a gift of life – I cannot think of a higher human virtue. Especially when you already have your own kids”.

I was too stunned to say anything.

After a few more moments, he lowered his head and continued – almost as if was uttering the words as the thoughts came to his mind “I know America is rich. But money can buy affordability. I have my doubts if money buys generosity. I had to wait till very late in my life to realize that I had a good shot at financial stability. Looking back, had I known that I will be the way I am today, I probably should have adopted an orphan. That should have been my duty.”

For a brief moment, he slipped into his negative mode. “Why is our government not putting efforts to increase awareness? We have quotas for education and jobs for so many people. I have nothing against that. Why not for a few more who have next to no chance to get a shot at life?”

That forty five minutes hit me very hard. People who know me are probably aware of how violently I am aligned to his points of views (save the government part). Having spent some time volunteering for an organization dedicated to battered women and kids, I came to see up close and personal how bleak the other side is.

Fortunately, I have seen the other side too. I have friends who have adopted kids – some after having their own and some without. I have friends (I have written about one of them) who have adopted from multiple countries and in one case – with specific medical issues because they could afford the treatment in US for them (among other things). I even have a friend from Dallas who (she and her husband) had explained to me before they got married that they were not going to have their own kids – instead they were going to adopt kids.

“Because there are more needy kids than caring parents in this world”, they had told me. I had an immediately flashback to that coffee meeting many many moons back as my dad kept talking.

Point 3.
His final point was something he said he got inspired by a story of a lady he read in the newspaper. Apparently, the lady who died of a terminal illness donated both her kidneys and because of that two other patients got their lives back.

“Even though she is dead, she is truly immortal. It is true that when I die, I am gone. I have no more use for my body parts. If any of those body parts can help somebody live or have a better life, why is there even a question about it? Why is this not the automatic mode?”

For another few seconds, he fell back to his favorite punching bag – “Why is our government not raising our awareness on this? Why are they not making it easy for us to do this?”

“My kidneys are failing. My lungs are at 40%. But I might have other parts – maybe my eyes – they are weak but not gone. Can they help a blind man get eyesight?”

Now, my understanding, while sketchy, is that it may not be as difficult or little known as he thinks it is in India. My general impression is that it might be less prevalent but it is easy to become donors. What I am not aware of is how good is the process of ensuring that the parts are secured within the stipulated period of time and all that. I think I need to discuss this more with my friends in India and then with him again.

Regardless of that, I could not agree more with him about how not to accept death as the final arbiter of how long we can be productive human beings. We can – in some parts – outlive death, if we so choose to. In a very noble way, to boot.

He was tired after three hours. He finally went back to sleeping in his cot.

I got up from my chair realizing again that the apple never fell too far from the tree!!! 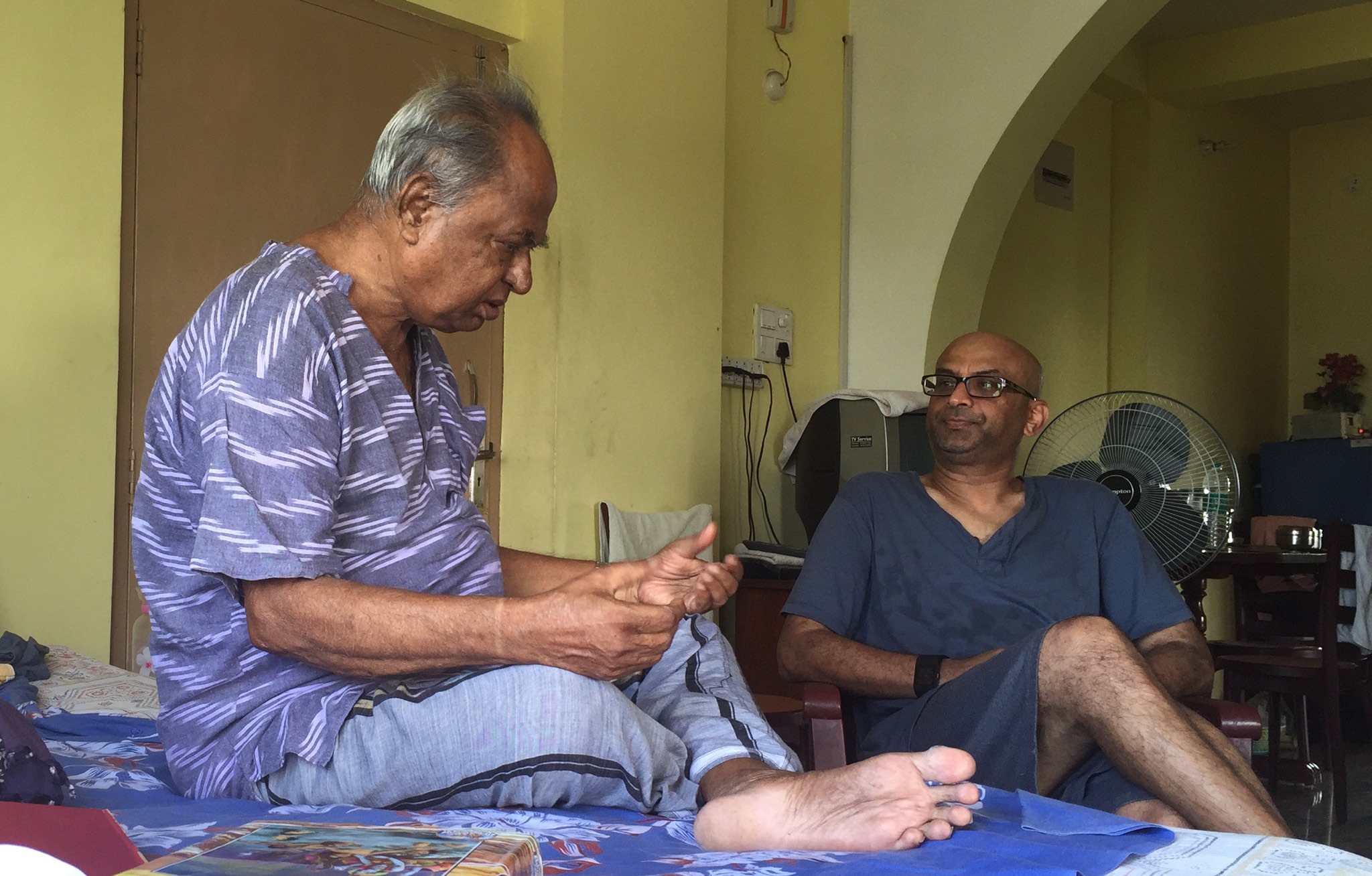