Things could not have been scripted out any better. After resisting going to India (my biggest fear being if I came down with Covid and needed hospitalization, that would be messy for everybody there) waiting to get the vaccinations, I finally got my second shot on my birthday. Immediately applied for an emergency visa that day. (I have a tourist visa to India and that is not valid during Covid period).

Indian consulate was very efficient and helpful. Within 24 hours, they approved my case and asked me to FedEx all my papers. Which I did in a matter of hours. All I needed was to get my passport back, put my mask on and jump on to a flight. Incredibly, within 48 more hours, I had my passport in my hand – with a new visa allowing me to make two emergency visits to my dad in the next few months. I immediately kept the passport back safely in its place.

And ever since, it has been safely sitting there. Never bothered to look for a flight ticket. The guy I was so eagerly waiting to go see had taken a different emergency exit a few hours before the passport could arrive!

Last year, out of a sheer premonition, I had asked him “What if mom died first?”. “I will die the next day”, he had confidently commented. And that is pretty much how it played out.

I consider myself fairly measured in how I let myself grieve. Slowly, but over a much longer period of time than most. But this one-two punch within a matter of a couple of months will call for the best in me to internalize.

Many moons back, sitting at a bar in Milton, Sharmila and I had decided that we will never let it be said that “we did not get to see our parents for a whole year before they died”. That resolution resulted in me seeing my parents every three months – year after year after year. The irony cannot be any richer or more cruel that after all that – it all ended exactly the way we were trying to prevent!!

Yet, what I did not get pales in comparison to what I did get. For somebody to be a father figure like he was to me when he had no role model for himself growing up (lost his dad when he was two and a half) – it could not have come easy to him. Growing up, I remember mostly the tough guy side of him. Only once did I see him break down – that too for a brief half minute – when he saw my grandmother’s dead body (my parents tended to my grandma when she had cancer and she took her last breath with me literally standing next to her). In his entire life – he never hugged me.

Those numerous trips for the last decade helped me see a completely different side of him. I got to know a lot more of his early childhood life that he had not divulged to me. For example, I did not know that he had a sister who died on their journey to grandma’s brother’s place when his dad died. He once surprised me by giving me his thoughts about adoptions of orphans and donation of organs! But the best moments were when we bonded over his sense of humor.

His ability to make light of a moment was only matched with his full throated laughter at a good joke. Nothing exemplifies his sense of humor more than that story of my visit to a nearby crematorium with my siblings!

In a full circle of life, eight years later, that was the exact place he was cremated ten days back. Frankly, knowing him, I would not have put it past him if he had raised his head one last time, looked around and assured those guys “Aapnader candidate esey gecche” and then went off to his eternal sleep.

I did not realize I will have to make this request of you so soon again… but please join me again in raising a toast to celebrate his life! For, what a life it was!! 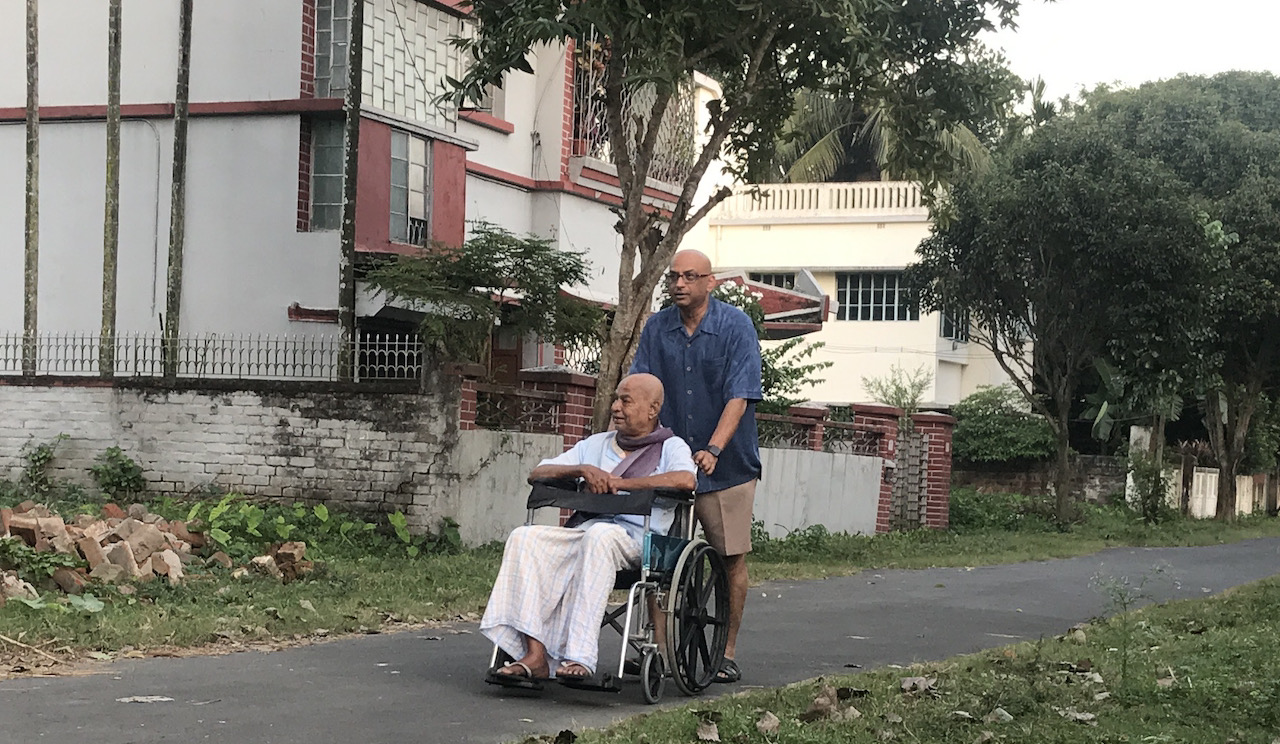