I am often – and of late, increasingly – compared with my dad. Folks who know both of us mention how we look alike, our mannerisms are similar and we apparently, even talk the same way. But when somebody who I have not seen for 34 years, sees me down the street filled with a lot of people and immediately recognizes me simply by how I looked and walked from a distance, I have to believe that there is a lot of truth to what people say.

Yesterday, after all that driving and meetings and getting lost in the trails, it was getting late. But I really really wanted to meet this guy from my past. Unfortunately, I was at least forty minutes from where he was working and he was another forty minutes from his home. You know you were friends with somebody when they say – “Don’t worry. I will be there”. And that meant he had an hour and a half drive back home.

Not knowing how he would look – I had vague memories of Raja (Rajarshi) – I was looking around in the middle of all the boisterous crowds in Reston Towne Center on a Thursday evening – to see if I could spot him. Like I said, I had no need to worry. Even if he did not remember me, he remembered my dad.

The familiar “Bachchuda!” cry (incidentally, Bachchu is what my nickname was in Durgapur – actually still is – but nobody calls me by that name anymore) made me look to my sharp right and there he was – Raja – pretty much looking the same from so many years back. Not losing hair helps a lot!! And his first comment – after seeing me after 34 years – was “Ekabarey Roy-jethur moto”! (“Just like Roy Uncle”).

I was sixteen and he could not have been over ten way back in that February 1982 Saraswati pujo day when I had visited them for the last time. A few years back, we had left the neighborhood. But before leaving the neighborhood, we used to play soccer and cricket together – along with a few other kids from the neighborhood.

I had always wanted to meet him after I located him a year back. In spite of coming to the DC area so often, yesterday was the first time I got some time to meet him.

We told the bar lady that we were meeting after 34 years. She promptly took pictures of us. The rest of the evening, we drew up the neighborhood houses on a napkin and went house by house to see if we remembered everybody from that house and see if we knew where they all were. Many times I would fish out my iPhone, go to my blog and show him pictures of many of those people. In my “Intersection Point” series, I had met them much later, took pictures of and chronicled them in my blog.

The whole evening was like stitching together a rich tapestry of scattered memories from those days. We would recollect something – ask the other – do you remember that? do you remember this? and often would burst out laughing or loudly go – Yes, Yes Yes.

It was a good thing I had told the lady at the bar about our background. Instead of getting irritated every time we got boisterous with our laughter and Bengali, she would come over and take more candid pictures of us on our phones!!

Thank you Raja for taking the pains to drive that long to make it possible for me to meet you. Let’s see if we can pull off that picnic in the same spot from 1980 with all our neighborhood folks one last time in the next few years!!! 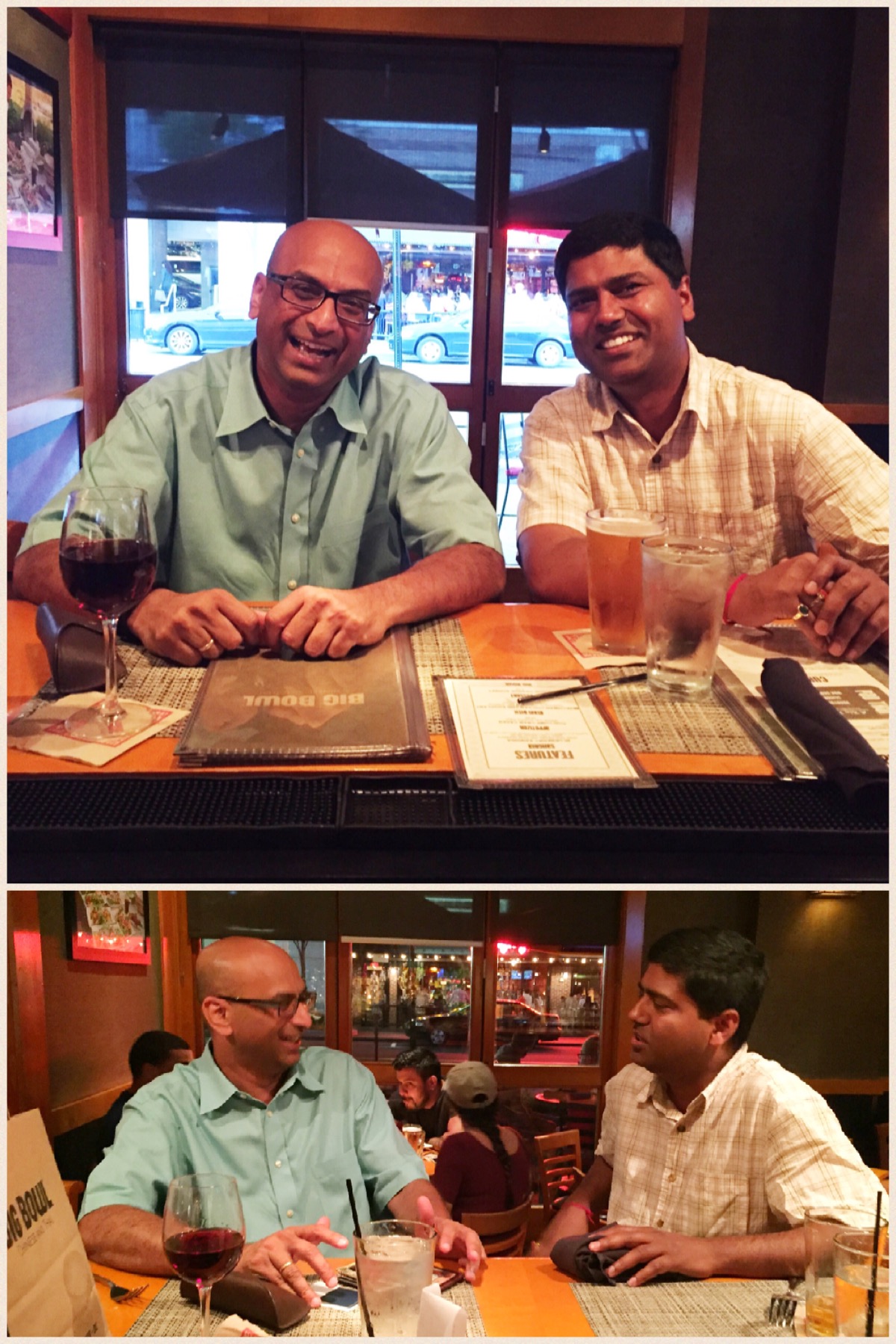