The mixologist from Kolkata

India means all about reconnecting and creating more intersection points. Between that and spending time with my ailing dad and mom, the couple of days that I stay everytime go off very fast. Once in a while, I also get to meet completely new strangers and make new friends and hopefully start new arcs of relationships that might intersect much later in life.

Such an opportunity presented itself one evening when I stayed at the ITC Sonar hotel. My brother and I were done with all our meetings and food and had some time to ourselves. We went down to the bar for a couple of drinks before going off to sleep.

Being deeply involved with mixology means you cannot help checking out the inventory at a bar – the different kinds of gins, rums, vodka, liquers, the flavors and so on. It also meant that I could not help showing off some of my knowledge to my brother – which is razor thin to begin with, but I took full advantage of the fact my brother has no idea any of those stuff other than wine and beer 🙂

Made a few new friends there – Mathew and Anjel – both of whom are from the part of the country that my sister actually used to live in. In fact, my sister adopted their daughter from Mother Teresa’s orphanage from Mathew’s hometown!!

Speaking of mixology and making new friends, my new find this trip was Ranjan Roy – the mixologist at the bar. I tested him by asking for two special cocktails – that were not on the menu and I was quite sure not too many customers in this part of the world ever ask for those (which he confirmed later). To my delight, he nailed both the cocktails with perfect ingredients, proportions and timing. I was truly impressed that he knew the different forms of ice to be used in the two drinks. Unfortunately, my dear old brother, with no respect for decorum towards cocktails simply took out the crushed ice from one of the drinks using his spoon – “Boddo thanda hoye jachche”!!! Apparently, he liked the taste, but it was getting too cold for him 🙂

Eventually, I let Ranjan experiment on me. I asked him to suprise me with a good dessert drink. He came up with something himself – he probably should christen it with his own name. But it was actually a mix of a dessert dish and a drink  (crepes in irish creme carefully caramelized with the heat from Cointreu orange liquer set afire). You can see him in this picture with his pyrotechnics!!! 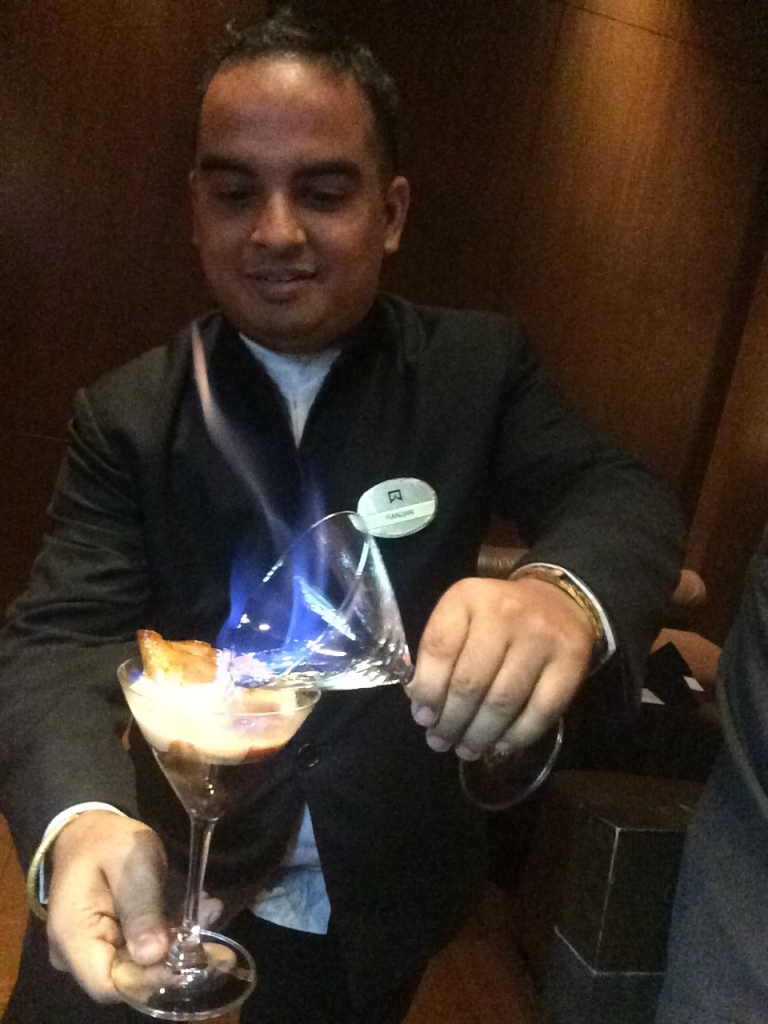