One more Thank You expressed!!

I had last seen her in 1974. Second grade for me. She was my class teacher (home room teacher). After a very long search, I was able to locate her earlier part of this year in Hyderabad. I had talked to her and promised her that when I get a chance, I will come and see her. And then when I realized that I lost my third grade home room teacher this year barely a few months after meeting her after a gap of over four decades, I got a renewed sense of urgency to meet my other teachers that I have not seen after leaving their classes.

That chance came today. I was done with work in Bangalore. Needed to head out to check on parents in Kolkata next. I took a slight detour and flew to Hyderabad. Tomorrow very early morning I will head out to Kolkata.

Of course, the only reason to stop by at Hyderabad was to get a chance to see my second grade teacher. And I am so glad that I did it. I could not think of saying Thank You in any more meaningful way than to spend some time with her (we called her Mrs. Shastry) for all the guidance she gave me during my formative years.

We sat down and talked about our old school days. Some of our old school teachers and some of my classmates. Her memory was super sharp. Nishi Jain, if you are reading this, you will get a chuckle from the fact that Mrs. Shastry told me the story of how it was very difficult to reduce your cent per cent marks even by half a point. Apparently, your answer papers were perfect – down to the last comma, as she said. Mousumi, if you are reading this, she remembers you very well too.

We talked about the book she has written. We talked about a topic of interest for both of us – although she has mastery of the topic is far superior than mine – “how the mind works”. I learnt a lot about different kinds of meditation – specifically a lot about forgiveness mediation. I need to talk to her a few more times over the phone to learn some more on the topic.

It was such an exhilarating feeling sitting in the same room with my elementary school teacher after 43 years!!! 43 years!!! I have been alive for only 8 years more!!! That day when the report cards were given out in 1974, I bet you none of us thought that we are going to meet again. In a very different city. And I would be much older than what she was then!!!

There were more surprises in stock. Soon, I met her son, daughter in law and her granddaughter. (They had gone outside when I had arrived). Get this – her son and I actually went to the same school for a year (although he was senior to me). They live in Seattle!! And he works in Anchorage!! (On my work life side, we do a lot of work in Alaska!!). They too are visiting India now.

And her granddaughter – she is in Atlanta!!! (student in Emory). That is where we live!!!

And her grandson? Lives in New York!! Not too far from where Natasha is!!!

Crazy, small world or what?

Did I mention that I felt on top of the world saying Thank You to my teacher from four and a half decades back? That acknowledging I am who I am today because of people like her was incredibly rewarding? For both of us, in fact!! 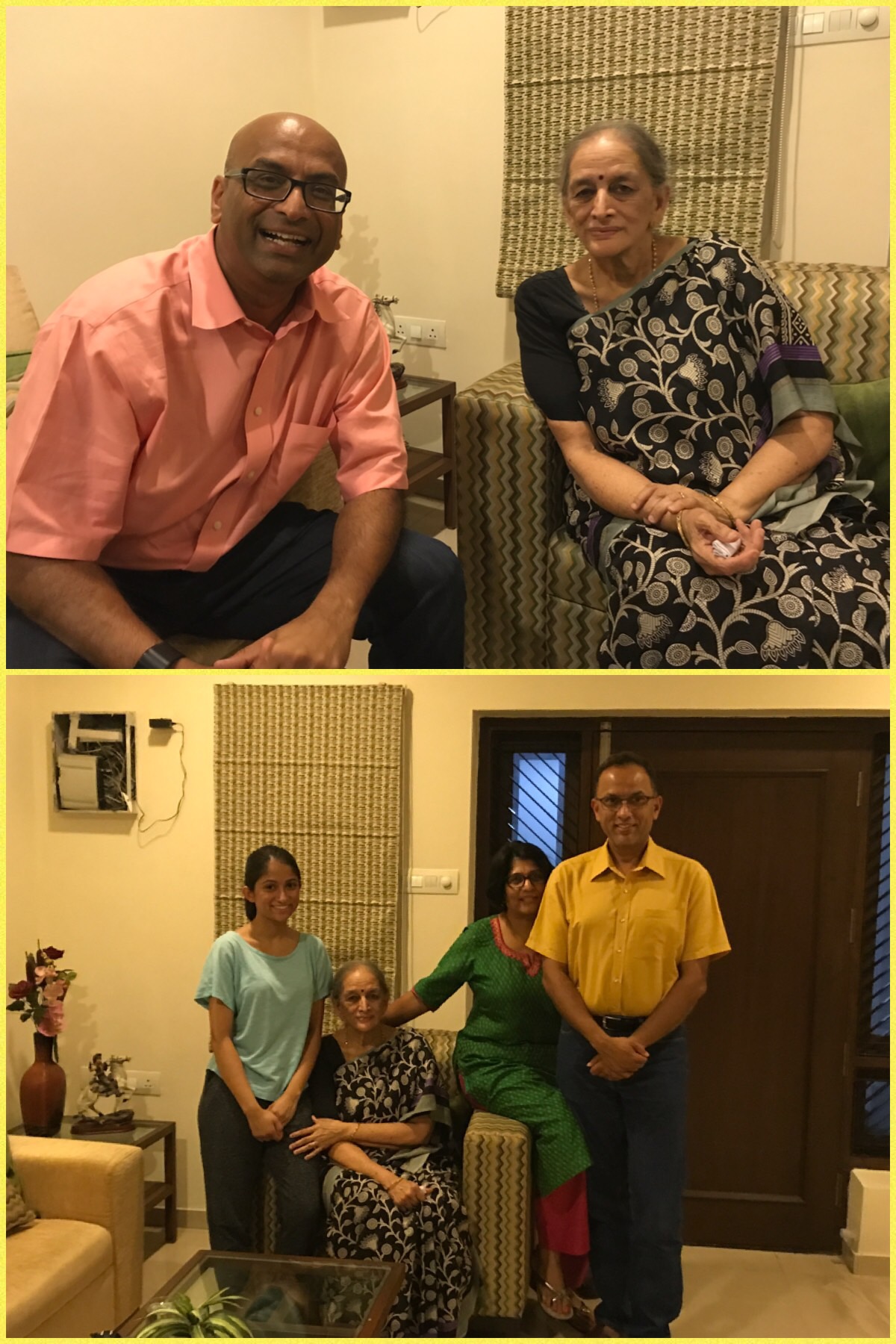