By the time I walked out of the investment bank after a very successful and exciting – and way over time – meeting analyzing our market and opportunities, I was literally swimming in numbers. I glanced at my watch. I still had time to squeeze in meeting a very old friend of mine before I scrambled to my flight home.

Or that is what I thought. What I had not bargained for is Chicago’s highways becoming a parking lot at 3 PM. Or that my friend and I would be waiting at identically named stores but a full fifteen minutes apart!! (This is what happens when you punch in the cafe name only without the address in Google Maps!!).

At that point, I was getting way too close for my comfort to not head out to the airport. But then again, I had not seen this guy for 26 years!! Last time I saw him was on the corridors of Alakananda – our hostel (dorm) during my Engineering days – back in May 1989!!

I decided that I would risk my flight. Found a bar from Google Maps somewhere between where we were and met up with Ramana Kadari!! I could have picked him from a vast sea of humanity any day. It is like time has wrought no change on his visage. Exactly the same guy – the looks, the temperament, the outlook – everything has remained the same!!

It was fantastic catching up on his fascinating journey of the last 26 years. I absolutely wish I had kept in touch with this guy. I always have a lot to learn from anybody who loses his dad in his ninth grade, grows up in the rural hinterland of India and yet fights his way to some of the top schools in India and now so successful in one of the best countries in the world!!

It was all of 35 minutes of meeting but boy did it feel like we had left each other just the other day. I still remember the day he won the T-shirt caption contest for our hostel (his entry was “Smart Alec” – a pun on our hostel name) and I kept kicking myself for not coming up with it myself!!

As we bade adieu promising not to wait for another 26 years, it slowly dawned on me that I have a flight to catch. I stuck with the back roads instead of the highways, weaved thru traffic like I was driving east west on a north south street, considered speed limits as FYIs only and I am sure the ensuing Doppler effect made some red lights appear green to me. Somehow made it to the rental car center, left the keys without waiting for my bill and ran to the bus. Later, in the bus, I realized that the keys were not the only thing I left in the car.

Skipped checking in my small little overnight bag as I normally do and breezed thru TSA Precheck to reach the gate just in time. And it is then that I realized I had not bargained for another reality in life. Counting on Delta flights being late!!!!

Well, that allowed me to spend a few minutes with another friend of mine I ran into as I was running to the gate, but that is a story for another day!!! 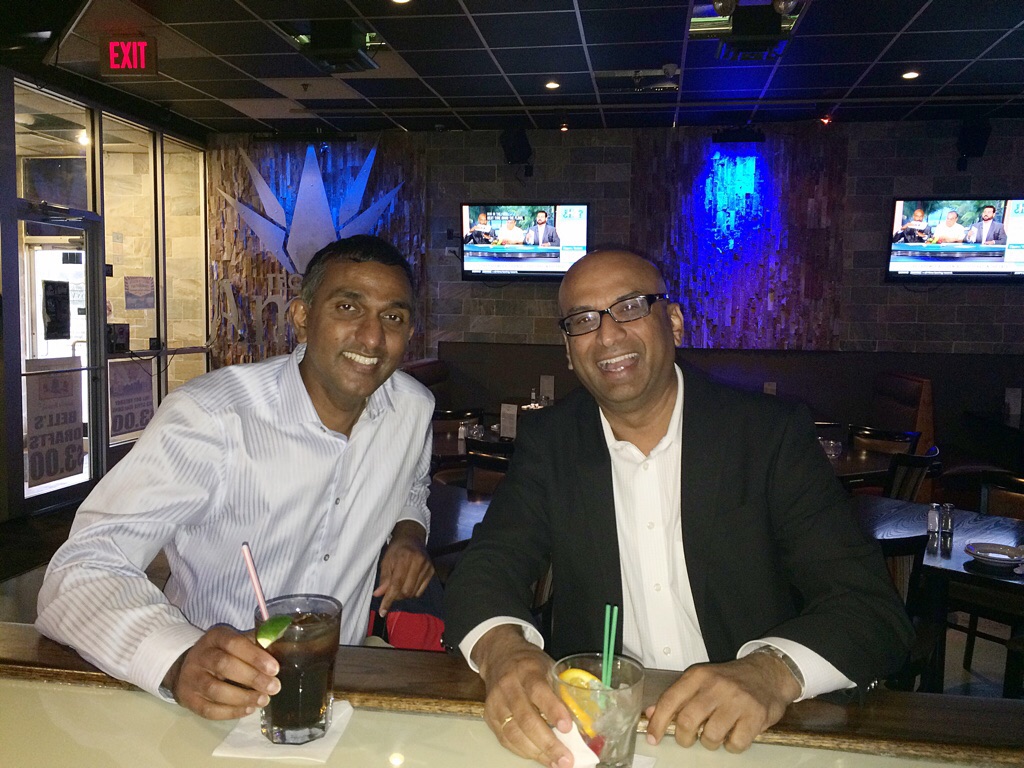 Posted May 13, 2015 by Rajib Roy in category "Intersection Points