Second cousin once removed? Or is it the other way round?

The other night, Avi, Sharmila and I were discussing what would your mom’s aunt’s daughter be to you. (See here). As I had explained to them that would be first cousin once removed.

Some time back, curiosity had gotten the better of me in terms of what are the rules of this nomenclature. Turns out there are some fairly nifty rules. The biggest shock I had was that generations way before you can also be your cousin! I always thought cousins are at your own generation or maybe below your generation.

The following chart (thanks to Alice Ramsay) is a neat way to picture it in your mind. If you are more of a rules based person (which is the way I think), this is what I have boiled it down to…

Let say you are trying to find the relationship of person A to you.
Keep traversing up the tree (your parent, A’s parent) till you find a common ancestor.
Let’s say you had to jump “x” steps and A had to jump “y” steps.
Take the minimum of x and y. Let’s say it is “w” (w=x or w=y). Take (w-1)

So to calculate your mom’s aunt’s daughter… You have to jump to your mom’s mom’s mom to find a common ancestor. And the other person has to go mom’s mom to get to the same point. Minimum of 3 and 2 is 2. 2-1=1. So the person is your first cousin. Now you had to jump three times to get there and she had to jump twice. Which means the difference in generation is one. (3-2 = 1)

So, she is your first cousin, once removed.

In short, jump from either side till you get a common ancestors. The minimum value in jumps less one is the “what”-eth cousin. The difference in the jumps is the “how much” removed.

Of course if the jump up and down goes thru you (all points are common ancestor/descendants) then they are your child or parent – with the same Great, Great Grand, Great Great Grand, 3rd Great Grand rule…,

See if the picture makes it easy.. 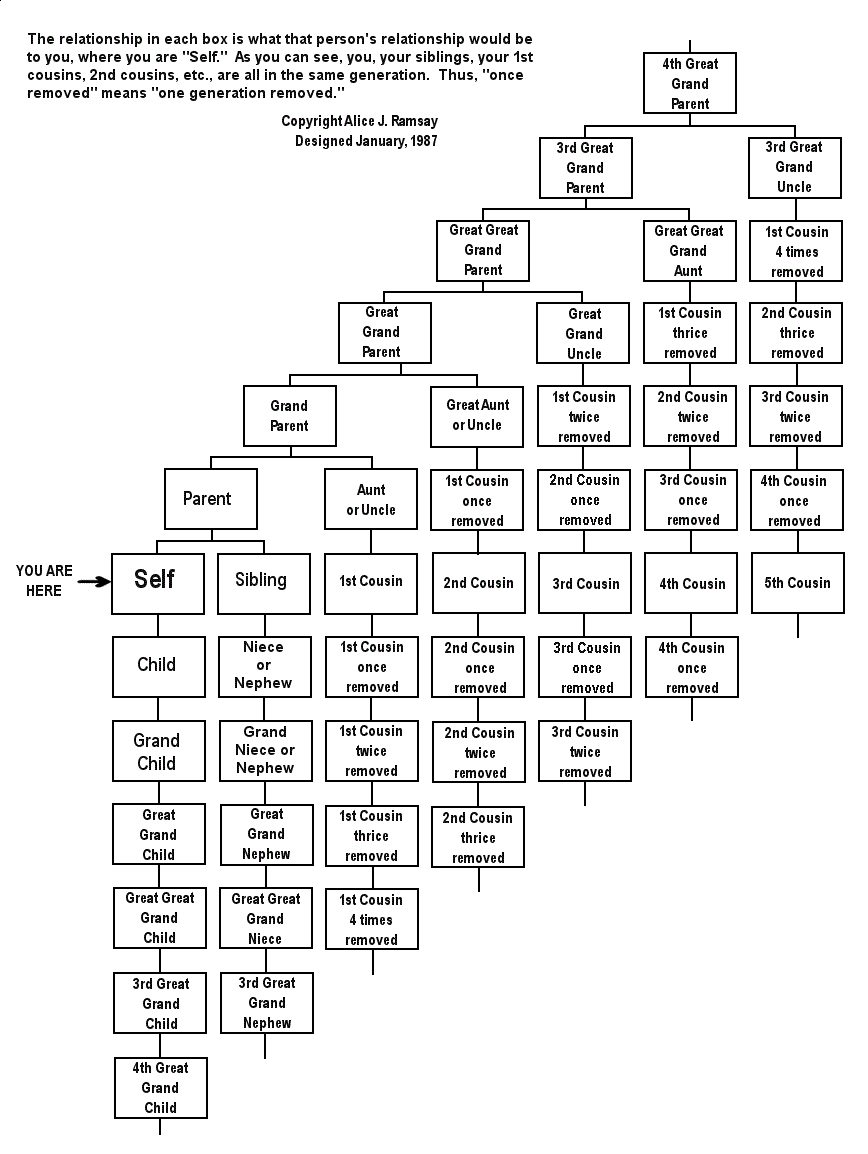