Way back in 1995, on a July morning, I had started a new job. My new manager Dan Stenger, on my first day at work, took me around to meet all the developers in that quiet startup company. “And this is Steve Martin”, he explained to me as he took me to yet another desk. “Steve, this is our new developer, Rajib Roy”.

Steve took his eyes off from his screen and mischievously told me – “Not that Steve Martin. Although sometimes I get emails meant for him!”. I grinned back and might have even said “That is funny”. I had learnt two things that day when I walked out of that room. I have a colleague named Steve Martin. And that there was another Steve Martin who probably was a very famous guy.

Today, I can whole heartedly admit to my friend Steve that I have never watched movies and there was absolutely no reason for me to knowingly grin that day. But I did fool him that day. Speaking of which, did I mention that I was made a development manager a few weeks after joining the company? Yeah, all that stuff about you cannot fool all the people all the time… don’t believe a word of it 🙂

In any case, Steve and I eventually parted from the company and went our own ways. I had an incredible chance meeting with him about a couple of years back where he had tagged me on a Facebook post of a picture of an airport terminal from the inside. I had correctly guessed that we were at the same airport at that moment and ran from one terminal to another to see him – albeit for a few seconds (they were finishing up his boarding).

If that was a great coincidence, try this…

Yesterday, I had posted about my Lyft driver who took me from Boston to Natick. Steve saw that post and let me know that he was born in that small town I had gone to. In fact, even gave me the address of the house he was born in. Quickly consulted Google maps and realized that my hotel was about 2.5 miles away. My first instinct was to run early morning to the house, take a few pictures and surprise Steve.

Instead of surprising Steve, I actually let him know of my plans. He told me that his mom would be thrilled if she could see that house again. That was the house she had given birth to Steve in – in the early 60s! Nearly six decades ago!!

Given that, I did not want to leave anything to chances. So, when my hostess for the evening came to pick me up – I commandeered her car and got her to take me to that house.

As I stopped there and started taking a few quick pictures from outside, I could see somebody rapidly closing the window shutters from inside. Got out of the car and rang the bell…

“You will find this very strange and I do not blame you for that. You see, my friend was born in this house nearly six decades back. My name is Rajib and I am visiting this town for business. I found out about my friend’s house and thought I could send a nice surprise to his mom.”

And then I offered to show Steve’s picture and our exchanges on my phone – but the lady – Julie is her name, did not need anything. She trusted my story right away. She explained how the house was built in 1953 (or did she say 1951?) and that there have been five owners before them. But she did not know of the Martins.

One of her sons peeked out from inside the house with a video game in hand.

“Was he born here too?”, I asked.
“Yes, This is John. He is 9”. And then she yelled for a Timmy. Presently another young kid came out. “And this is Timmy. He is 8. He was born here too”.
“Wow”!
I explained to the two kids how my friend from Dallas was born in that house many many years back and I had come to take a picture of the house.
“Can we be in it?”, they asked innocently.
“Sure”

And that is how I managed to get a few shots of the house.

Later last night, I sent the pictures to Steve and he went back to his archives to send a few pictures of the house from the yesteryears. Including one from the late 50s with his dad standing in front of it and one on a snow covered day!

What is the chance that in 1995, when I met Steve on that day, I would realize that someday I would be the guy that would reconnect him and his mother to the house that she gave birth to him in?

Life, I tell you! Always full of incredible surprises!!! 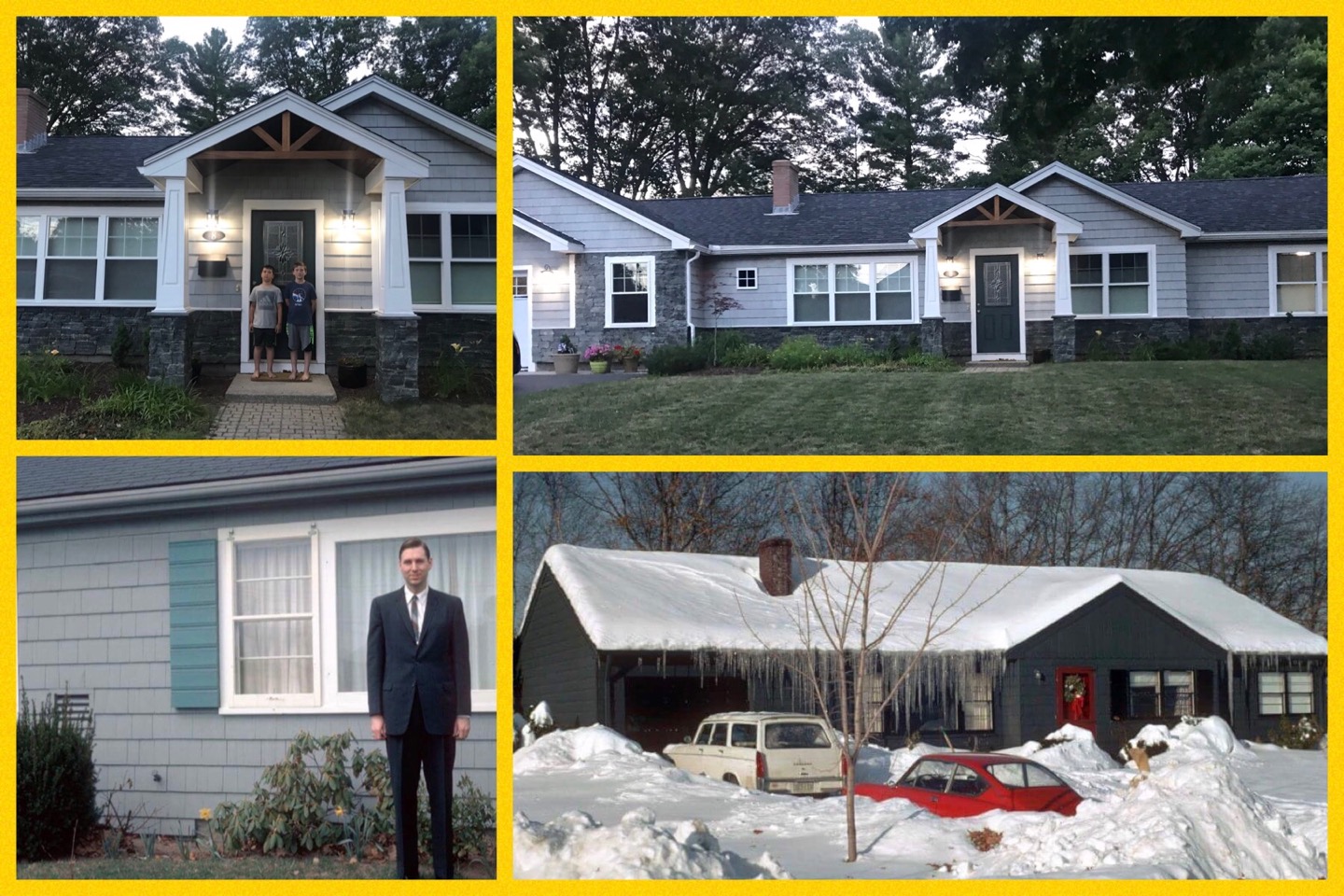