This is why I consider myself so lucky…

Like every other day, I called up my mom yesterday and was expecting to be the usual few minutes of chat before she went on with her household stuff. Instead, she was very excited to let me know that two of my friends had visited her and my dad in the afternoon.
“Friends? Who?”, I asked. I could not think of anybody immediately who would know their house in Kalyani to visit them.
“From St. Xavier’s School, Durgapur”
“Really?” That was even more confusing.
“One of them is called Happy”
In my mind, I could think of one Happy Ghosh who I have not met in 30 years and in any case he was not from that school. And the other Happy was the nickname of Gurdeep Singh. He is the highest level executive at Vizag Steel about 1500 kms away. What would he be doing in Kalyani? How would he know where my parents lived?

At least that made a little more sense. Do you remember the story from http://www.rajibroy.com/?p=7598 ? If you recollect from that story, Shirshendu’s parents and sister live in Kalyani. I had met him for the first time in January of this year; in spite of having many many common friends, our paths had never crossed. The most inspiring part was to realize how he had gone to Dubai and used to sell books and fought his way to become a top executive in the construction business. It made sense that he was visiting his parents and decided to drop by my parents’ home. I am sure I had given him the rough location of my parents’ home.
But why Gurdeep?

In any case, for the next ten minutes my mom went on to wax eloquent on how she was so impressed with Shirshendu and Gurdeep. She could not say “Ki bhalo chheley duto” enough number of times. (“What wonderful boys” would be the rough translation). Then my dad took the phone – which is a rarity for him unless he has something specific to say.

“Your friend told me that moving to Kalyani from Durgapur was the right choice. I think he is right”. I was very tempted to say “Really? All those years the three (siblings) of us kept on impressing upon you to move and you would not agree – what was all that about? Even after moving, you still complain about leaving Durgapur. And now my friend says the same thing – and suddenly, you think that is the right decision. Okay, whatever.” 🙂 What I really said is “I think he is a smart guy”.

After finishing the call, I was wondering how to get hold of Shirshendu. I was not sure his Dubai number would work in Kalyani. However, in these days of Facebook, these are are but minor problems. In a few minutes, I got a message from Shirshendu on FB saying he and Gurdeep visited my parents. A couple of messages later, I called him up in his local India number.

I could not thank him enough for visiting my parents and cheering them up. My sister was also there and she was very excited too. I told him that my parents and my sister could not say enough good things about the two of them. But especially my dad seemed to be very energized by their trip.

I also called Gurdeep up and gave him the same message. I let him know that being in his professional life where he is, I could not believe he took the time to visit my parents. My parents have not been this happy in a long time.

One of the stories that came up was how my parents chuckled at Shirshendu’s shaved head (see picture) and noted that their elder son also does the same and they think this is becoming a popular style now. Seeing as much fun as my parents were having, my two friends just laughed it off.
And never mentioned the fact that Shirshendu lost his dad a few days back. In our part of the world, as part of the last rites of a parent passing away, the sons shave off their head. That is why
Shirshendu was in Kalyani. Gurdeep had dropped everything and gone to be by his friend’s side in such trying times.

It took me quite a few minutes after the phone calls to come to terms with myself to understand what kind of grace it takes for somebody to cremate his dad and then decide to go spread not sorrow but pure happiness to other dads nearby. What kind of a friend you have to be to take leave from a high flying post and instead fly to be with your friend to give him company and then extend further to join him is spreading the goodness around.

And what sensitivity to not let my parents’ mood down by telling them the truth behind the shaving of head. (btw, my parents still do not know).

My deepest regret? In spite of going to Kalyani every three months, I never got a chance to meet Shirshendu’s dad. Well, at least I am going to meet his mom next time I am there. Maybe I will take a few tips on how to recite poetry!! (See the story mentioned above).

I have always considered myself to be an end product of the inspiration and influence of numerous people that have crossed my path throughout my life. Shirshendu and Gurdeep, you two are way up on that list. 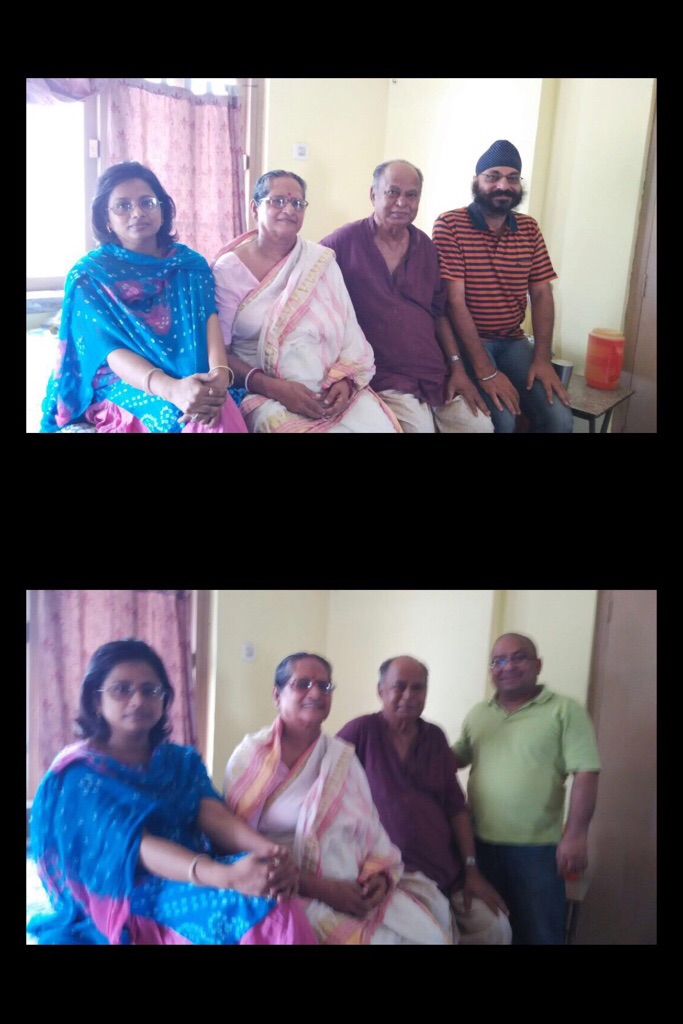