Sometimes, getting to know some of the people I meet on the road makes the pain of travel so much worth it. Overnight trip to Florida and then headed out on a coast to coast flight for an overnight trip to Portland. Reached office struggling hard to fend off fatigue and then after a day’s worth of work went out with some team mates – well past my bedtime in my home time zone. Honestly, it is not often that I get to see all the team members and I had spent too much time and money to go there not to spend time with the team members.

I left – way way late at night – after getting to know a little more one of the most wonderful persons I have met. Bob VanderMeer is the gentleman in the top right end of those blurry pictures. He is an avid runner! He joined us for a drink – but only after he put in a run after office meetings. And he had already run a longer run in the morning. Which was only separated by twelve hours from his previous run the night before!!

So naturally the topic gravitated around running, long runs, ultra runs and why some countries like Ethiopia seem to consistently produce great runners. (In the process, I learnt that my theory – that they are constantly running away from lions and therefore the ones that survive are obviously fast runners – has been completely debunked 🙂

One of the topics was “tolerance for pain”. How running absolutely needs a tolerance for pain and how different people and different countries have different tolerances. He gave an example – and at the end of it, you literally would have had to come and close my jaw shut. He talked about the pain tolerance levels of Ethiopians. I had the obvious question “How would you know?”.

At that point, I learnt, exactly how he would know. He is a dad of six kids. Only one biological with his wife. And five adopted – three from Ethiopia and two from China. That was a powerful moment for me. Having donated my time to Familyplace for years – which is an organization dedicated to helping battered women and kids, I have seen enough to believe that there are more kids than caring parents in this world. Anybody who can subtract one from that problem is tops in my books. Adoption, at many levels is the ultimate act of sacrifice and unselfishness with the noble purpose of giving a great life to a kid. A kid who found himself/herself in this world thru no volition of his or her own. A kid who otherwise would have had not a chance in God’s green earth to get near such a life. All it takes is to make a difference to just one child. Just give one child a chance to stand up in life.

With that perspective, I realized I was sitting across somebody who chose to make a difference five times over!! Words cannot possibly describe the awe and respect that I felt for Bob and his wife.

Going back to the story – his son from Ethiopia – Ethan – you can see if in the picture – had to be taken to a dentist when he was seven and a half years old because of malnourished teeth and the dentist had to take one out. It was a painful process since he had never had a shot in the gums before and the tooth, it appeared was mighty stubborn. It had to be taken out in pieces. The kid obviously endured it all.

A few months later, he came up and told Bob that another molar on the other side was hurting. Bob reminded him that it meant that they would have to take it out too. Ethan evidently listened intently and nodded indicating that he understood. Then he went upstairs. About half an hour or so later, he came down with the tooth in his hand and his gums bleeding! It took a little while for Bob to realize that Ethan had taken out the tooth himself without any pain medication. I have no idea how to take one of my teeth out myself in thirty minutes even if I had somehow figured out how to deal with the pain.

A couple of months later, Ethan came down with another tooth in his hand!!! One more painful tooth taken out without any pain medication!!!

Bob continued to explain why therefore he is convinced of different people having vastly different tolerance to pain and that reflected on their endurance to run. I was totally distracted. All that was swirling thru my mind were pictures of five adoptions, a kid pulling his teeth out himself … …

(By the way, all of you who thought that running is painful have lost all your teeth in your arguments 🙂 )

Last night when I came back to my room and resolved to write the story some time, I realized that the picture of my friend was too blurred. I knew both of us had an early morning flight. I woke up at 4 AM and started getting ready. Before that, I texted him if he could send a good picture of his since I wanted to write about him. He let me know that he would do so moment he came back from his run!! The guy woke up at 3:30 to go put another run!!!!

He did do me a great favor by sending a picture of his whole family instead of just himself. 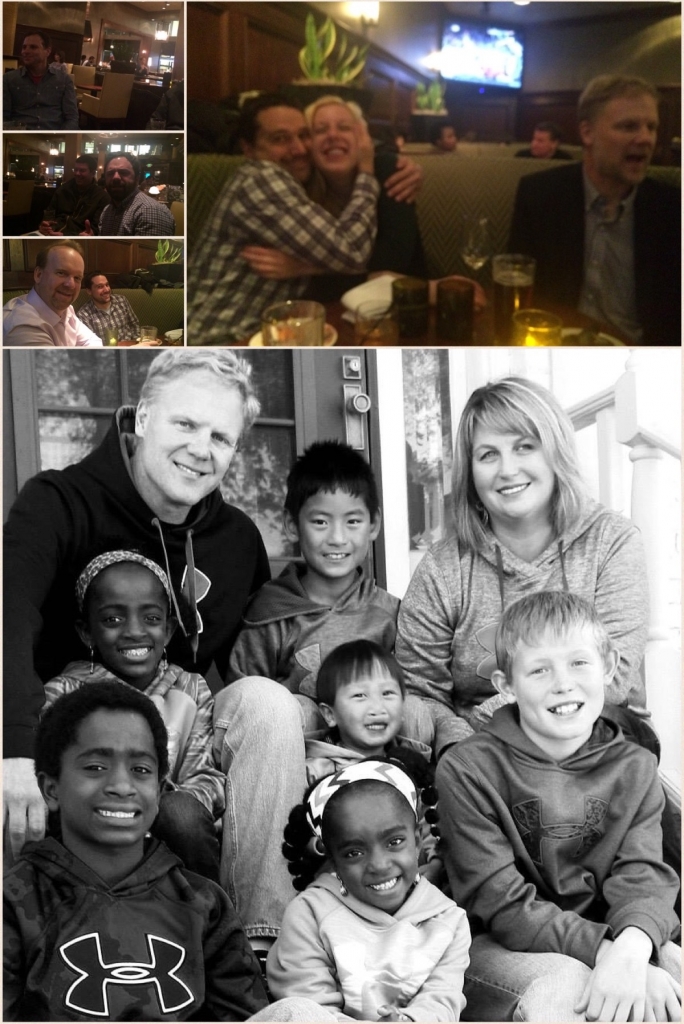