It is not often that you trek for eight hours just to say goodbye.

Our company meetings were done for the day. It was a gorgeous afternoon in Miami. Everybody got the afternoon off for R&R. My R&R was to go for a long run. I had already roped in Bob Vander Meer to run with me. You may remember Bob from a previous blog of mine where I wrote about he and his wife Audrey’s five adopted kids (http://www.rajibroy.com/?p=7465). I figured I might have caught Bob on a weak day since that morning he had already put in 9 miles (15K) of run at 7 minute and change per mile pace early at 4 AM. If I had any prayer of keeping up with him, that had to be my day.

With that, we hit the roads. In under two minutes, we found good old Mark Abatto on the road and got him to join us too. That was the second part of my strategy to slow Bob down (or at least not be the only one feeling bad that he was way ahead of us). The three of us headed straight towards the beach. The scenery was so beautiful that we did not realize how the miles came and went.

Finally, after putting in 5K, I suggested that we take a “beer break” (thereby unveiling my third part of the strategy to slow Bob down 🙂 ) We pulled into a restaurant, sat outside, ordered some water and beer and wine and settled down. I was so fascinated by Bob’s adoption story from our previous meeting that I had to ask him “Tell me some stories of what you thought of Ethiopia when you went there”. Both Mark and I learnt some fascinating aspects of Bob’s kids, Bob and Audrey and the country. Some of the really interesting stories as I recollect…..

Bob and Audrey were contacted by the adoption agency to enquire if they would be interested in three siblings. That was not what they were prepared for – but I guess there is no end to their generosity and gracefulness. Soon, they were on a plane to meet the three kids. The three (out of four) siblings had lost their dad to a disease. Their dad died in front of them. Soon thereafter, their mother was killed right in front of their eyes stemming from a dispute over – get this – a cow! Their eldest sibling (less than ten years) hauled his three brothers and sisters and trekked it up to a uncle’s house that he was aware of.

That uncle took them in but eventually could not support them. He kept the eldest one to work in the farm and brought the other three to the orphanage explaining he had no ability to support them. And once they all contracted diseases, he had no option left but to give them up. Bob and Audrey met their extremely malnourished future kids – thin as a rail with bloated bellies – in that manner that day. While they were there, a gentleman walked up to them one day and explained that he had trekked for eight hours just to say good bye to those three kids. It was that uncle!! He had heard back from the orphanage about the good news and had come to spend a couple of more hours with the kids. He spoke to the very young kids for two hours in their language and then turned away to trek back for another eight hours.

The high point in the story for me was when Bob talked about reading my story of taking my dad to his birthplace last month and that he wants to do it some day for his kids. He wants them to meet their eldest sibling some day. Just like me, he has been Googling the names of the places he is aware of in their history. Unlike me, he found out that, for the last leg, he has to walk for two and a half hours to reach the village. That is the only mode of transport today. I, at least, got to drive wherever I went.

“So, how are the people there in Ethiopia?”, I asked.

Extremely poor, he said. That did not surprise me. What surprised me is that he found them to be the happiest people in the world in spite of (maybe because of???) lack of money. They never felt insecure there because everybody was so helpful. And they had a very strong value system.

“What do you mean a strong value system?”, I asked.

There was this time that one of the girls in Bob and Audrey’s group (they had gone there as part of a charity organization) lost her iPhone. There were a lot of kids they were mingling with and she suddenly realized that she was missing her iPhone. She went and told somebody “My phone was here and I cannot find it. Could you help me?” I understand she was being apologetic, being careful not to offend anybody in a new country. Somebody talked to the kids. Evidently, all the kids, like a swarm of bees, got together in one end of the ground and confabulated amongst themselves. Presently, one kid was singled out (who apparently could not help himself from the fanciest gadget he had ever seen) and he then walked up to the girl and gave her phone back. Everybody was happy.

And then when this kid went back to the group, every other kid beat the daylights out of him. You can only imagine how the Americans were feeling seeing all this violence to this kid. Amidst all these protests and protestations (“It was just a phone”, “He is just a kid”), somebody pulled them aside and said – “Do not mess with them. When an individual brings ignominy to the whole group, the group has to teach the rules of staying in the group. That is the only way communities can survive in our country.” I have to admit, I was like “Yeah!, we should try some of that self policing ourselves in this country!!”

“You are making it sound like it is a great country. Tell me about some of the underbellies of the place”.

“Well”, Bob explained, “there is this place called Korah – which is a part of Addis Ababa. That is where all those afflicted with leprosy and orphans are sent to”. “You mean, they throw their helpless people in one corner?”, I gulped. “Yes, they literally live in trash. And I mean trash”.

And yet, another beautiful story awaited me in that trash. Bob and Audrey ran into another girl – who was from Korah. Angels as they are, they wanted to adopt her too. Unfortunately, she was beyond the age of adoption in Ethiopia. So, they did the next best thing they could. They financially support her to go to a boarding school – where she not only gets a place to live in, she gets education too. Evidently, Ethiopia has this help at least for orphans. If somebody will pay, the orphans can get a boarding and education. If any one of you ever want to support a kid there, please get in touch with Bob and Audrey directly (Audrey is there on my Facebook).

“What has been the one thing you have learnt from them, Bob”?

“How we think about life and death. To them, they have seen death from so close that they accept it as a part of life. They do not understand what is the big deal about it”.

I made a mental note to chew over that some time later. Immediately, though, we had run out of beer and wine in our glasses. So, we signaled each other and the three of us hit the road again to run back another 5K back to the hotel. 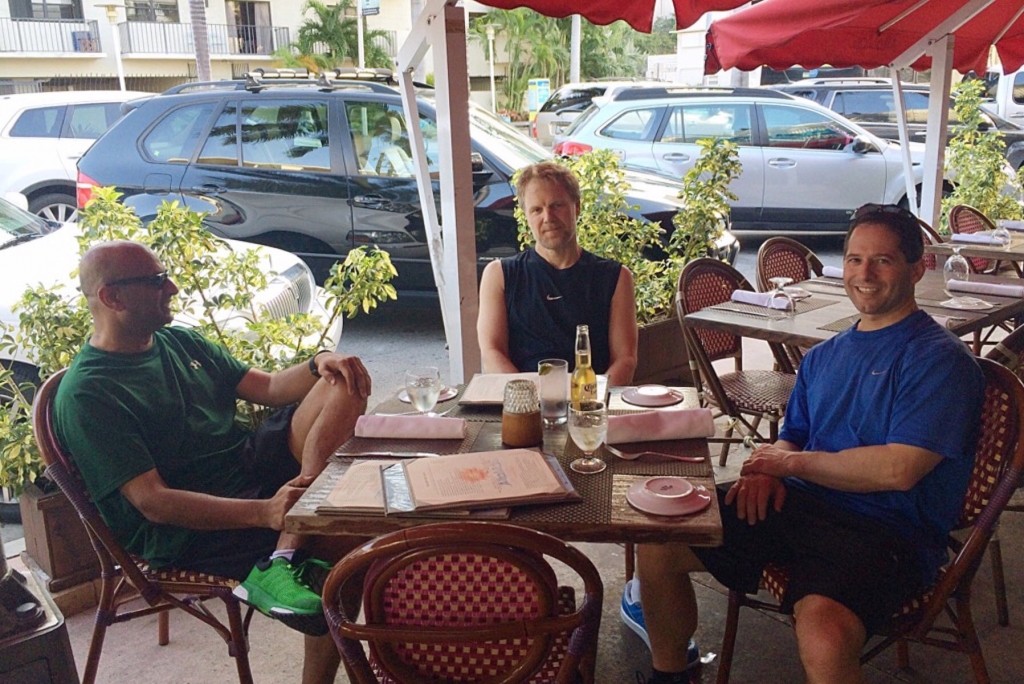