In the annals of my intersection points, this would go down as one of the most unique ones. For a simple reason. For the first time, I actually met Kanta!! We have known each other for the last nearly 30 years, written letters to each other but never actually physically met.

Let me see if I can piece this together. I have attempted at a graph too…

Line 1: I had a friend during my school days called Shukla. She had a room mate in college called Kanta Lahiri. I had become pen-pals with her thru an introduction from Shukla

Line 2: My best friend from school days was Avijit. He was also a common friend with Shukla. He later worked in Apollo hospital in Kolkata. He moved on later to Perth, Australia.

Line 3: My dad had his knee surgery done a couple of years back at Apollo hospital by a surgeon named Dr. Chatterjee

Line 5. And he put all this together to create the mega coincidence. Kanta is married to Dr. Chatterjee!!! Because, Kanta also had worked in Apollo for some time!!!

The simple equation is: my pen pal is married to my dad’s surgeon. But I needed a few more people in the equation to get the tenuous chain together!!

It was a perfect meeting!! I wish I had some more time to talk to her. Our discussions covered every point in our chain (some more than others 🙂 ), our professional lives (she is a very accomplished executive), health deterioration of our parents/in laws (we had similar experiences with depression in family members) and then my inevitable question – “What life lessons have you learnt that I can benefit from?” 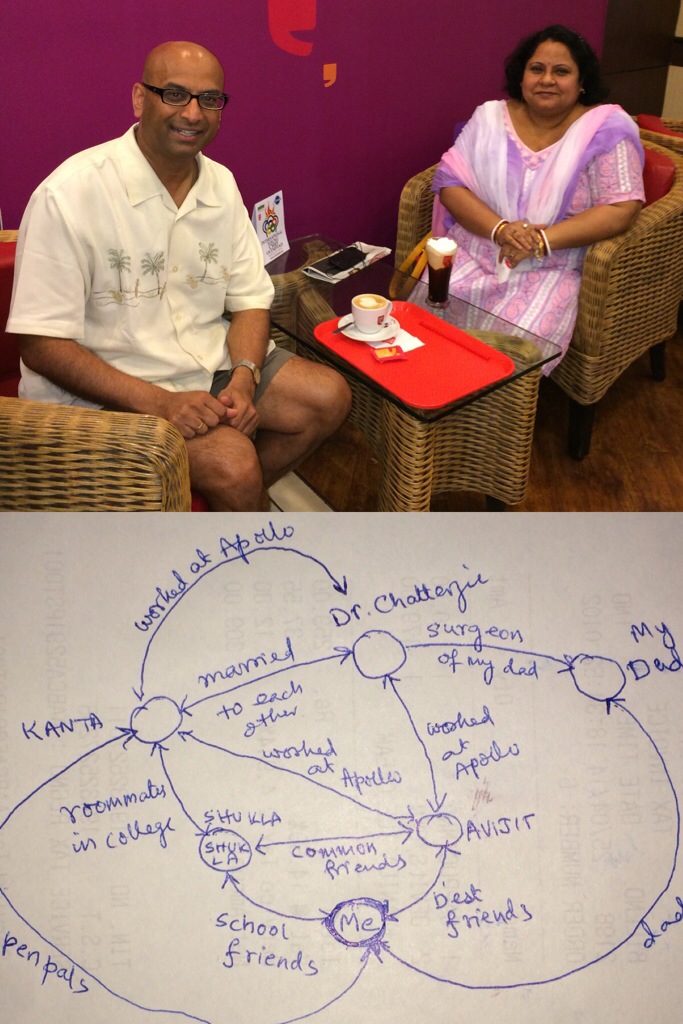