“Your relationship with time is the ultimate unrequited love.”

It was exactly a conversation like this way back when with Sharmila sitting at the bar at Milton’s restaurant that made me resolve to go see my parents in India every quarter.

Thank you Raghuram Ramakrishnan for pointing me to this.

I was out for a drink with a friend. We’ll call him George. As we settled in, George asked about my life and how I was feeling. At first, I gave him the standard response that we’ve all grown so accustomed to:
“I’m good. Busy!”
He stared blankly through my empty words.

Feeling the pressure of his gaze, I adjusted myself and added that living in California had begun to wear on me, it being so far from my parents on the East Coast. I had been 3,000 miles away for the last 12 years. And with the path I was on, there was no end in sight. The moment of vulnerability sparked an interaction that changed my life:

Gut punch.
I took a deep breath. It wasn’t meant to be rude—it was just…math.

If the average life expectancy is ~80 years, my parents are in their mid-60s, and I see them one time per year, the math—however depressing—says I will see them 15 more times before they are gone.

Our time together is finite, but we often fail to recognize it until it’s too late. Time is cruel. You’ll love it with all of your being—you may even pray for more of it—but time doesn’t care about you. Your relationship with time is the ultimate unrequited love.

The morning after this conversation, my wife and I had a very candid conversation about what we wanted in life. A few days later, we listed our house in California on the market, packed up our things, and shipped off to the East Coast to be closer to our parents.

My friend @waitbutwhy wrote about this “Parent Time” phenomenon in a recent New York Times op-ed. In classic fashion, he produced a striking visualization to capture the sentiment.
It brings one takeaway to life: Our time with our loved ones is so limited and precious. All of this math—depressing as it seems—should be a call to arms.

Identify the people and activities you care most deeply about. Prioritize them ruthlessly. It may be difficult—even painful—but it’s a decision you’ll never regret.

We spend most of our lives playing a game:

Everything we do is in anticipation of the future. When that future comes, we simply reset to the next one.

It’s natural, but it’s a dangerous game—one that we will lose, eventually. Time is our most precious asset and the present is all that’s guaranteed. Spend it wisely, with those you love, in ways you’ll never regret. 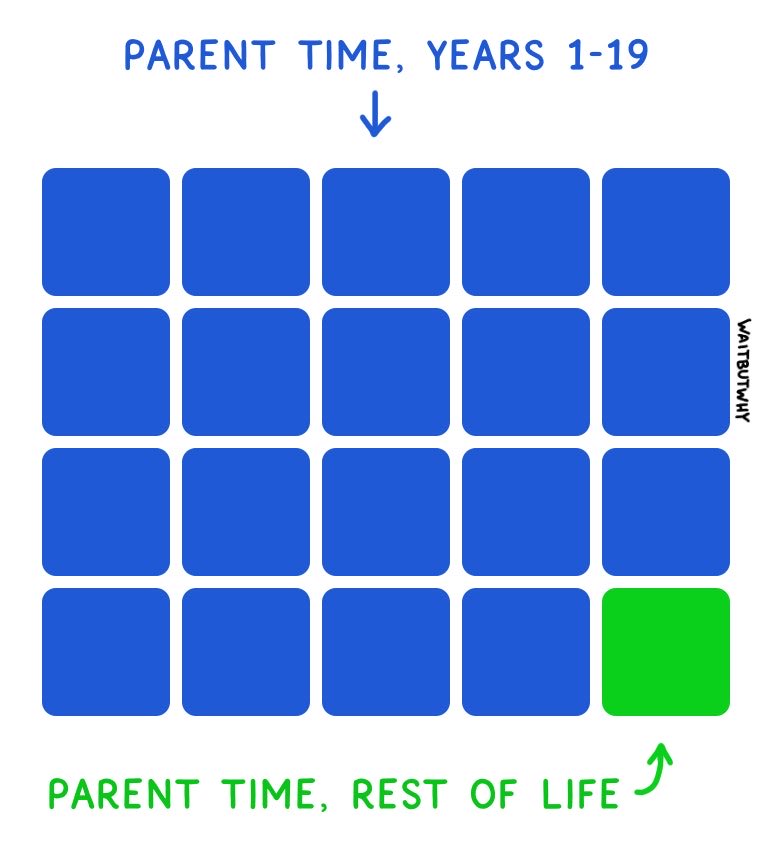