The one and only time they visited us in the USA

They were reasonably excited to come to the US to see their first grandchild. Early October 1998, I had flown to India to get all their paperwork in order. On Oct 5, I took them to the US Consulate to get their visas. We submitted our paperwork and then waited in the hall.

Presently, my mom’s and dad’s names were called. As we walked up to the counter, the gentleman (from America) behind the counter asked me to tell my dad to go back and sit. He would like to interview my mom only. Also, he asked me to ask her if she would like to be interviewed in English or Bengali. I asked my mom and surprisingly, for somebody who taught English in primary school, she said “Bengali”. A translator (called Gobindo, I remember) came in and I stepped out of the booth. I was within earshot distance and could generally hear what was going on.

The consular would ask a question, Gobindo would translate, my mom would answer, Gobindo would re-translate and that went on for a few minutes. After about six fairly standard questions, he asked “Do you have any intent to immigrate after you reach there”. After the translation was done, my mom gave an answer that I have never forgotten – “Gobindo, onaakey bolo je aami to onaader bhasa-i bujhtey paarchhi na. Okhaney immigrate korey aami ki korbo?”. Gobindo faithfully translated back – “Sir, she is saying she can’t even understand your language. Why would she want to immigrate to that country?”.

Apparently, he was satisfied. I could see the smile on his face and the familiar sound of loud stamping on some paperwork followed. He excused her and called me back. “Come back in the evening and pick up their passports. And have a safe trip”.

Five days later on Oct 10, we exited India from Sahar (Bombay) airport. The next day, we arrived in New York. And their much expired passports still bear the immigration stamp of their entry – Oct 11, 1998.

As much as they were thrilled to see their first grandchild, they did not take to America too well. They wanted to go back to their own home as soon as they could. The fact that dad could not walk up to the grocery store to pick up vegetables (he could not drive a car) or that they could not speak the local language got to them fairly quickly (they would always pick desolate streets to take Natasha out in her stroller so that they did not have to face any “Good morning” or “How are you” from Americans!!). (I guess mom was right, after all).

After three months, I took them back to India and dropped them home on the 11th of Feb, 1999.

Those were the only flights they had ever taken in their lives!!!

Towards the end of her life – 2019 onwards, my mom had expressed a couple of times a desire to come to the USA one more time. That never happened; but if she had outlived dad, I know we would have given it our best shot. 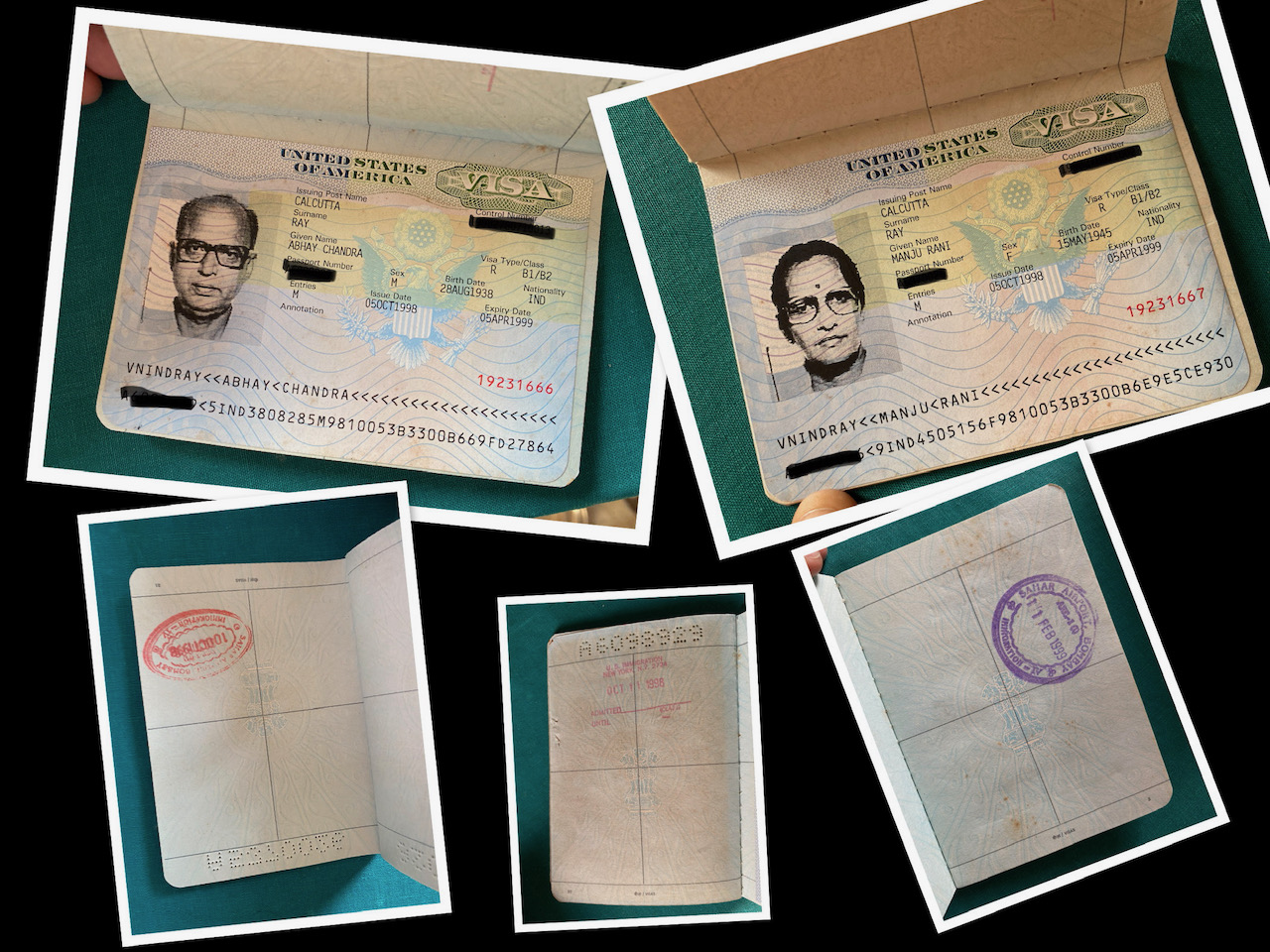