The “sparks” of music

The exact day escapes me. It was a Saturday morning. Somewhere in the summer of 1980. Around 11 am, if my memory serves me right. I was sitting up in my bed studying a subject – which I have no recollection of, but surely my body was gently oscillating to and fro as it tended to do when I would read out a subject book aloud. It was like I was trying to shake out some space in my memory cells so that I could jam in some more of those confounded facts I was supposed to remember.

All I remember is my dad coming back home in his bicycle (the trusted Phillipps bicycle that he bought in 1964 and clung on to till 2012 when he moved out of Durgapur) and peeking into the bedroom and mysteriously declaring “Ki enechhhi bol to?” (Can you guess what I have brought?).

Not used to getting any excuses from our parents to leave our books alone, the three of us made a beeline to dad who, by then, had started unwrapping a cardboard box and out came a vague looking black box – the likes of which I had never seen before. What particularly caught my eye was the prominent red button in the corner.

That was how I got introduced to what I learnt later to be a “tape recorder” (cassette player). Dad proceeded to connect the gadget to 230V of power, fished out a small rectangular looking thing and pressed a button. Voila! a small door swung open and dad fit the rectangular thingy in it and shut it firmly.

Then I remember him pressing the red button (which had caught all my attention and fascination just by the way it stood out with its color) multiple times. But you could see from his reaction that things were not going as he expected them to. A quick look into a small sheet of paper later, he figured out how to “record” something. Apparently, you had to press the red colored Record button AND the “Play” button (second from right) together.

It was an “Anand” branded tape recorder. I do not believe I have seen that brand ever after. However, surprisingly after quite a few days of searching Google images, I was able to grab a picture of that tape recorder. Exactly like the one we had.

In the meanwhile, mom had brought a cup of tea for dad. Dad took the cup of tea in his hand and triumphantly started his maiden recording. It was the first line of “Tumi je amaar… ogo tumi je amaar”. He rendered it as off-key as he could muster with a voice that would stop a train in its tracks. But he gave it his all. And then, he took a long sip of the tea with that hissing sound we make back in India when we drink tongue-scalding hot tea – considered very uncouth in the Western culture (the hissing sound, not the hot tea). And pressed the Stop button.

The next 15 minutes was like the “Rewind” and “Play” button had gotten stuck; we listened to him over and over and over again. We were mesmerized by how that puny black box could remember what dad did and play it back faithfully. Too faithfully, I might add. The recorded voice was as awful as his original rendition.

I was awe-struck enough to momentarily consider a change in career ambition from being a steam locomotive driver to somebody who can make those black boxes. Not for long though.

But then, dad had to go for work. “B” shift, as they called back in the steel plant he used to work in. He carefully packed the recorder up and put it in the “locker” of our “almirah” (safe). I guess, being new, it was that valuable.

This is where things get a little more interesting. In the evening, unable to get over my curiosity, I brought the box out of the safe. My mom pointedly asked me not to do so. I deliberately disobeyed her. And tried to do a dad. I hooked up the instrument to the electric power and tried to show off to my siblings. At this point, I was a hero to them.

I did everything I thought I saw dad do. All I remember is there was a big spark, a dull noise and some smoke coming out. The small red LED on the right went off to sleep slowly as if in a disapproving way. Panic got written all over me. In a matter of seconds, I went from hero to zero. I may not have understood technology then. But even I knew smoke ought to come out of a steam locomotive – not a tape recorder.

Panic quickly gave way to fear. I was deathly afraid of my dad’s reaction. He was kind of short tempered to begin with. And he was not going to be happy at my misdeeds. I was going to be skinned alive, I had convinced myself.

That evening was a living terror. I could not put my mind to any studies. I just sat there petrified by what my dad’s reaction would be. I remember going off to bed and then not being able to sleep. My dad returned around 10:30PM. I remember the gate opening, the knock on the door, mom opening the door and then she said something.

I have no recollection what happened after that. I had panicked myself to sleep.

Woke up next morning and in about a jiffy, remembered everything. It was a Sunday. Could not even escape to school. I lay there in the bed refusing to get up. But something assured me a bit. It was the tone of my dad’s voice as he talked to mom and then the maid servant who had dutifully showed up.

Eventually, of course, I had to get out of bed. Those maid servants wanting to clean up beds could be really irritating at times.

Funny thing, dad did not mention anything about the recorder. Which was worse, frankly. I was wishing that he had said something. By the way, you could not have seen a young kid focused on his book as fervently as I was that morning – even if you had tried to. If you did though, you might have noticed that I might have been holding the book upside down.

Then dad left home at 9am. With the box. I assumed he had gone to see what could be done.

Came back on his faithful bike at 11 am – again with that same box. And summoned me and my mom. That is when I realized – this is going to be it. I am going to get some stern lecturing. Perhaps worse. And mom will be dragged into it for letting me do it too.

Much to my surprise, he opened up the box and asked me “Chalao ebaar”. He asked me to operate the machine. And told my mom to sing a song. Of course, I was like “No, no, no, you do it. What do I know about these things?”. Would not touch that dratted thing with a barge pole, if I could help it.

Dad, though insisted. Which, with trembling fingers, I complied to.

“As trivial as I might have been to you,
Please, do pen a song for me”

Much later – in December of 2012, I had sat down for a music session with my mom. My first and last one with her. I had reminded her of the incident. She sang that song while I played the tabla with her. This time, I let the nephews do the video recording.

For some reason, after my mom passed away, that song has played in my head repeatedly. 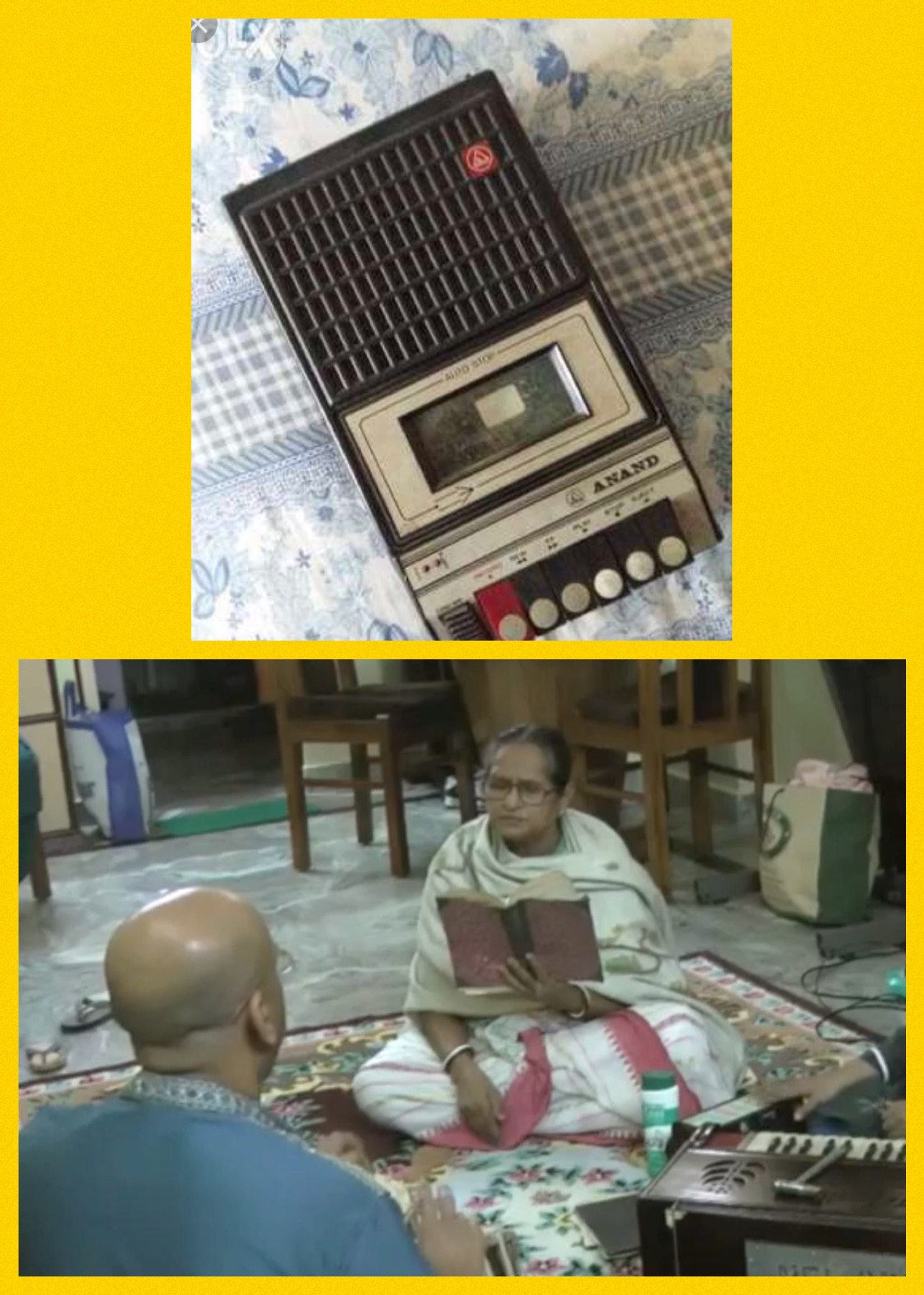 Posted January 31, 2021 by Rajib Roy in category "Family in India