It had been a long sixteen hour flight. And my jet lag was starting to kick in. Immigration, Customs and Starbucks later, eventually my Lyft ride showed.

As I settled down in my seat and Gregory (Roso) started navigating thru the evening Atlanta traffic, I was tempted to doze off. Instead, decided to see if a conversation and the Starbucks coffee could keep me awake. I was hoping against hopes that Gregory would be up for a conversation.

“So, what do you do outside of Lyft rides?”
“Music”.
That was interesting, I thought.
“What kind of music? Do you play music? Sing?”
“No, I produce music”.
“Produce music?”

Frankly, I had no idea what music production meant. What I learnt fascinated me. Gregory composes his own music and records them. Then he leases them or sells them outright.

Turns out he comes up with his own tunes and rhythms and then composes them with the instruments that he has.

“So, how do you sell them?”
“Mostly thru my website and networking”.

“Why that URL?”, I asked mildly amused by the name.

“I am a big fan of basketball. And Kobe”. Looks like Gregory grew up with Kobe as his idol. The one thing he learnt from him, he said, is the value of practice. I understand, Kobe practiced for long hours. I do not know much about basketball. But Gregory informed me that Kobe had a nickname Vino because he got better with age unlike most other players. And that explained the website name. Gregory fashions himself after his idol.

“How about your personal life? Where are you from?”
“My mom is originally from Dominican Republic. I was born in Connecticut and spent early childhood there. Moved here with my mom eleven years back”
“And your dad?”
“He is in Connecticut”
“So, they are separated”
“Yes. My dad remarried and I have a step sister”
“And your mother?”
“She never married again. It is she and I.”

“Do you see your dad much?”
“Yes. I visit them whenever I can”
“You are close to your dad and step sister?”
“Now, I am. It did not start this way. I was very angry with my dad. I did not like him”
“And then?”
“Well, as I grew older, I realized that this was probably for the best for both of them. Now, I am glad that they are not together.”
“Really?”
“Yes. They are both in better places. And me working thru my anger with my dad has put me in a stronger place.”

“How about your girlfriend?”
“I do not have time for girls now.”
“Oh!”
“I want to stay focused on making money. I want to make a lot of money. I have my youth now. I do not want to lose focus. That is what Kobe would have told me.”
“What will you do with a lot of money?”
“I want to take care of my mom”
“How so?”
“I want to buy her a good house and make sure she is financially very stable.”

“You know, your mom sounds like a wonderful person. Certainly has a wonderful son. I hope to meet her some day.”
“Thank you, sir! If you had come half an hour earlier, you could have met her.”

That surprised me!
“How? Were you giving her a lift?”
“No. She works in the hotel when I am dropping you.”

Wow!! What is the chance of that?
Sharmila and I were going to meet at a Westin for a drink instead of me going home and from there were going to head out to her art show inauguration. It is exactly in that hotel, as liuck would have it, that my Lyft driver’s mom works!!

Sure enough, when I enquired later in the restaurant in Westin, Maria had left a little while ago.

“No worries, Gregory. I go there once in a while. I will remember to meet her and tell her that she has a son who has great head on his young shoulders.”

That is when we pulled up to the Westin. I quickly introduced Sharmila and Gregory to each other and Sharmila took our picture.

If you ever run into Gregory, don’t forget to say Hi and encourage this incredible young gentleman. 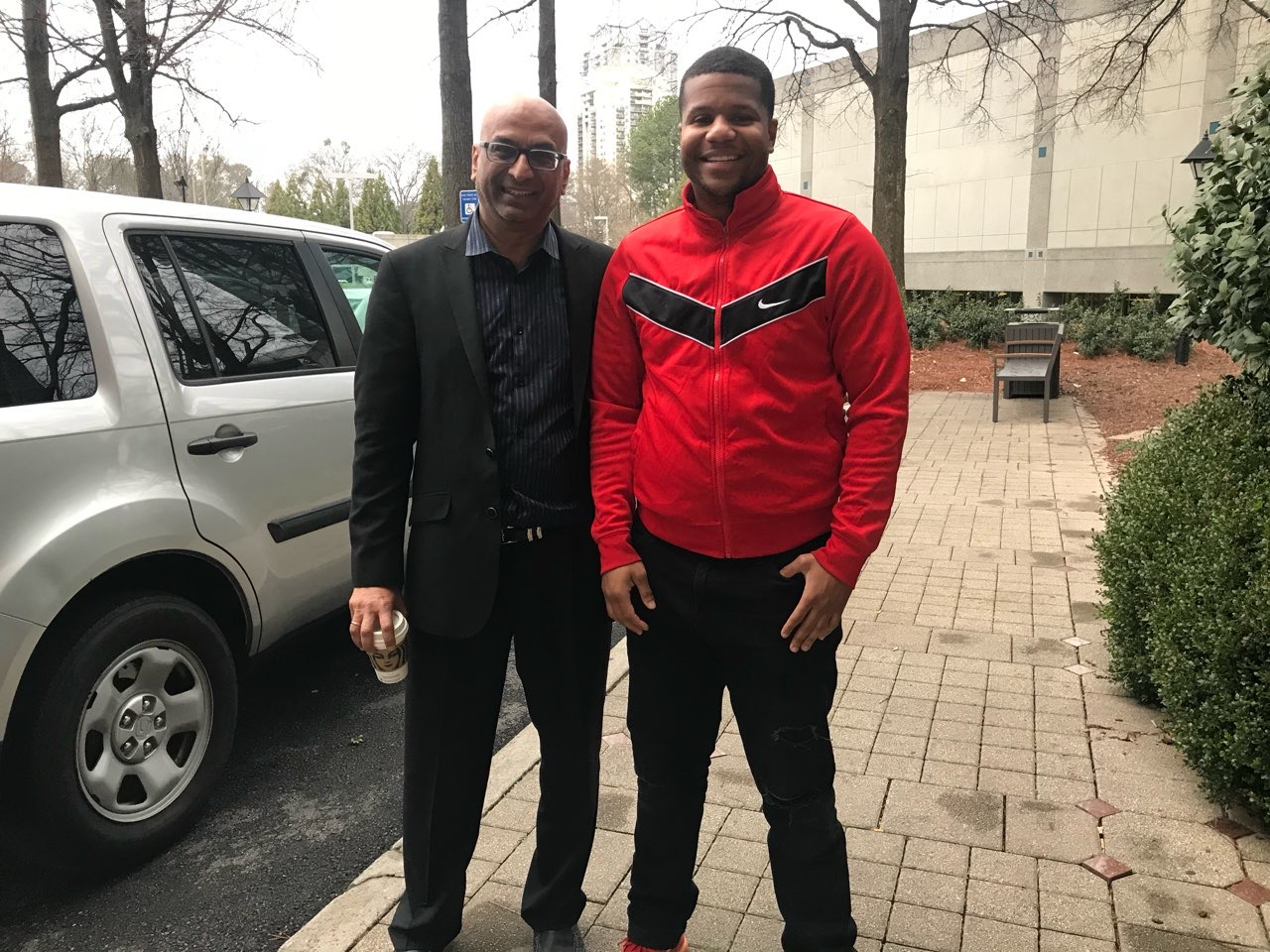