I started with a walk and then after a quarter mile, got tired of walking and started running. I was more than wary of walking today, let alone running. You see, for this whole week, I have been suffering from vertigo. I believe the medical term in BPPV. While I have motion sickness and fear of heights it has never hit me this bad. I can sit in a place and be totally normal – drive a car, ride a bike but if I stand up or move around, I feel wobbly. Some days have been better than others but today has been a fairly bad day.

The walk was a little wobbly and I kept trying to not move my head suddenly. The trail was fairly empty – so the chance of me hitting somebody or coming across running drunk was fairly low. Started running slowly and then eventually picked up to a pace a bit lower than normal. I was definitely wobbling a little – especially if I moved by head suddenly but kept it within safe controls. On the other hand, the endorphins were accumulating at a level that I felt brave enough to continue.

When I had started my run, at the head of the trail, met a lady Allison who was starting her walk. We had seen each other multiple times in the trail but never talked. Anyways, it was good to know her and chat with her. Eventually I started walking faster and then – as I mentioned, running.

Now, the incident I am going to narrate happened on my way back – I had just crossed the three mile mark and I could see Allison coming from the other side. Now that we knew each other, I was definitely going to wave at her and wish her a good day when we passed each other.

There was nobody else on the trail. Just as we came within 100 yards of each other – and at this point of time I was going downhill from a bridge – I could see a bike show up at the turn on the other end behind Allison. A few seconds later, another bike showed up. Both were coming from behind Allison.

When all four of us got closer to each other, I could see the (presumably) wife – probably in her sixties was in the lead and was enthusiastically pedaling uphill. Her husband (I presume) decidedly looked like the reluctant companion huffing and puffing up the bridge.

Just as I came within 10 yards of Allison and started smiling and raising my hand to her, the lady bicyclist came around her to pass her (between us). A moment before that she yelled “On your left!” – which is a customary warning you give before you pass somebody – so as to not startle them. And a split second later, as she passed me, she yelled “Times 2!”.

That got me confused. My thought process went something like this in the next few moments – “Times 2? Why? Oh!”. I realized that she passed me from my left too! Although Allison and I were approaching each other, the lady bicyclist passed both of us from our left since she was in the middle.

Smart, I thought, but why bother? I did not need any warning. I could see her. Unlike Allison, my back was not towards her.

At that very moment, the huffing and puffing husband came upon us and as he passed us, bleated out defiantly, “I am the 2!”.

I do not know whether it was the endorphins or something, I found it very funny. First, how wrong I was in my analysis. And how he, almost apologetically, explained that he is the 2 (but really did not want to be, if you asked him). 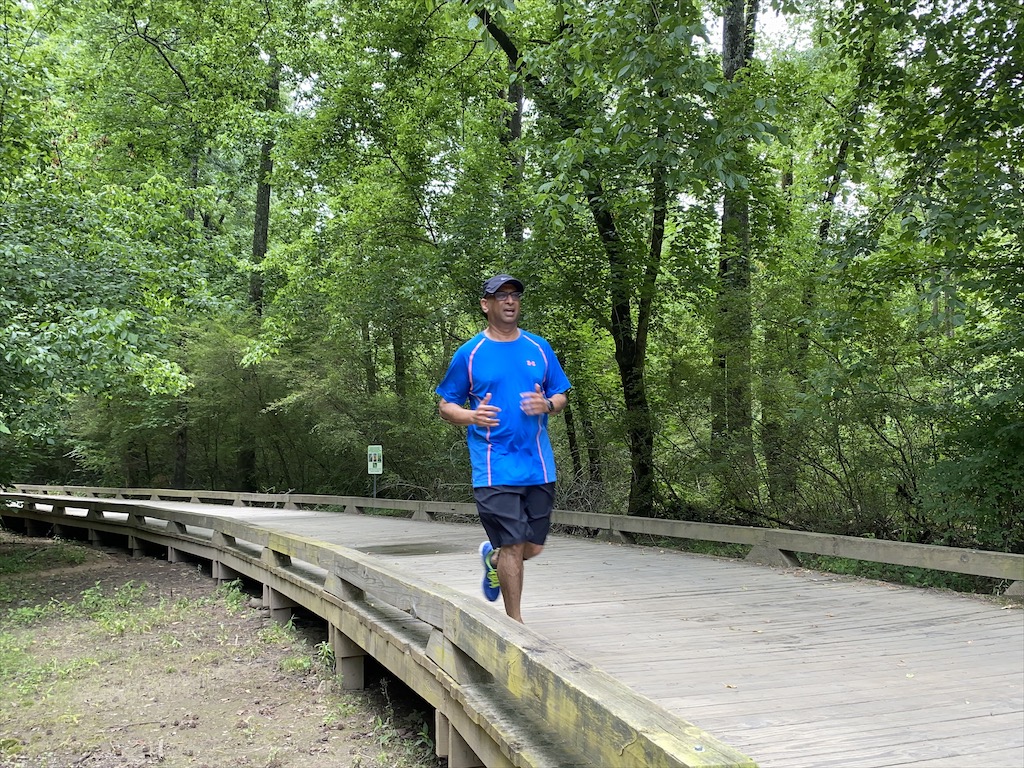