Two scores and fourteen years ago…

Two scores and fourteen years ago, I was born. Naked, cold and hungry.
Then it got worse.

Somewhere in this journey that we fashionably call “life”, I learnt how to crawl and then walk all over. It was a great feeling of freedom learning what this world feels like.
Then was told to sit down at a desk and not move. As I “learn”.

I learnt how to utter unintelligible sounds. Sometimes even put them in a way that meant something. I was delighted that I could tell others how I felt.
Then I was told to shut up and listen to teachers, elders, boss, wife (I think I just repeated myself).

Somewhere, I was taught that it was all about money. Financial freedom, social status is how I will be judged. Not just me – my family, my kids.
Then somebody told me I will die. Worse, I cannot take my bank balance and my family with me.

Never wanted to see a doctor after that.

But apparently, I am supposed to put a notch on an imaginary tree – again fashionably called age – every time the earth heaves me around the sun one full time in an incredible speed of thousands of miles per second.

I asked if the earth came with clutch or brakes.
They said No.

So, every year, the world connives to remind me that one more notch has been marked on this day. Over 350 at current count have wished me to say (in computing language) n=n+1

Always the one to interpret it as n=n-1 (I am that much closer to death) and therefore realizing how many well wishers I have, I have tried to return their wishes in the way they reached out to me – phone call for a phone call, WhatsApp message for a WhatsApp message, text for a text….)

I know not how long I am here.

But it was so worthwhile being here.

To understand the worthwhileness, I cite one of the messages I got. See picture attached.

I have known her for nearly five decades. In the ensuing confusion, I understand that I even married her daughter. But she has remained the “sister of my mother”.

When it comes to technology, while she lives in India, she will identify with the Amish in Pennsylvania more than Bangalore. The last time she visited us in US, she was scared of holding the IPad wrong because it went all topsy turvy on her when she tilted it.

And then when it comes to typing out something, English being a (distant) second language to her, spellcheck squiggles and autocorrects are her veritable nightmares. You can literally see the struggle she had of not knowing how to undo once she pressed an “Enter” after Dear and before my name mistakenly. Or the spaces she had to put to comply to old habits of putting your name down in pen right justified in a letter.

And then for me to realize she WhatsApped this message from my father in law’s number – the one person out of four parents and parents in law that I had that I got along with most and yet was the first one to go…. that is a painful reminder that n=n+1 is as true as n=n-1.

You know, to realize that the same sister of my mother has figured how not to tilt a phone and right justify a birthday message to me from a place literally half a world away… I say “To hell with subtraction and addition… Let’s celebrate “n” “

In its integral and fractional forms. Every day. 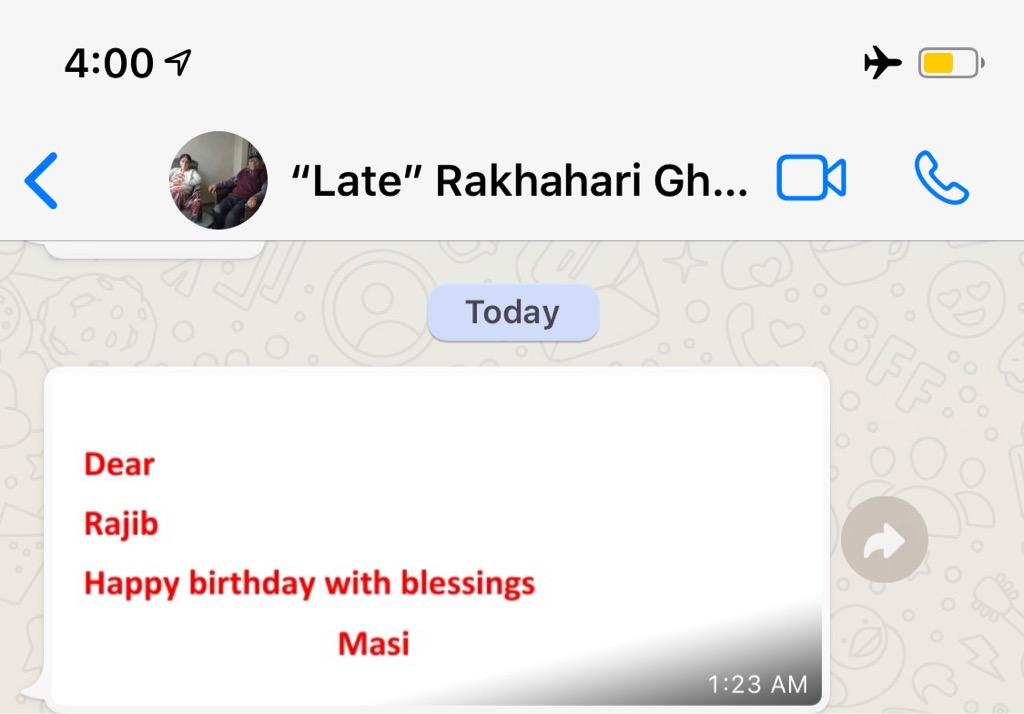