What was she looking at?

There was something familiar and yet strange about the lady. I was busy with my oatmeal in the Delta Skyclub, sitting all by myself, when I noticed thru the corner of my left eye that a lady – in what appeared to be dark formal clothes – walking past me. And then she stopped. That made me instinctively look up. That is when I was hit with the feeling of something familiar and yet, something strange.

She was standing at about 10:30 to me (left front). She kept peering out in the open thru the large glass walls, diagonally across from me. She would occasionally look in her phone, punch in something and then again look out in the open. I looked out a couple of times in the direction she was looking. There was nothing to see other than the airport watch tower half cloaked in fog and a lot of planes on the ground dodging each other as they rolled thru. The sky was one dreary grey sky.

But she kept looking that way – with a sense of purpose – that betrayed that she was looking for something in particular. I glanced at her a little more intently. Dark hair, brown skin, very prim in her dark office suit and red scarf. The roller and handbag screamed top of the class brands.

That is when something familiar struck me. Could she be….? No! What is the chance? And why would she be looking out into the fog? I tried to lean over to get a better look at the face. Most of what I could see matched a face I knew but still I had not crossed past what my friends in the legal land would say “beyond reasonable doubt”.

I just sat back. Eventually, she will move and turn around, I argued with myself. That is when I would find out if she is who I thought she might be. For a moment, I toyed with the idea of calling up the lady I knew and if the phone rang in front of me…. you know the rest. But what if she was not? What am I going to give as my excuse to my friend for calling her so early in the morning?

Well, I just kept eating my oatmeal and waited patiently for her to make the first move. I eventually finished my oatmeal and she had still not moved!! Finally, one of those cleaning persons came around and asked “Are you done with this, sir?”. I nodded in the affirmative “Yes, ma’m”. And that conversation next to her jolted the lady in the suit into the present reality. She shifted a little – thinking she might be in the way.

And our eyes met immediately. It was good old Malika alright!!!

After the usual pleasantries (I had not seen her in quite some time), I asked her “What the heck were you looking into the clouds for?”.
“I was looking for Russell.” (That be her husband).
That did not exactly clear up things. Much like the weather outside, I was still foggy. Why was she looking for Russell there? First, he would not be in a runway walking along. And if he was flying somewhere, there was no way she could see him in an airplane.

A little background about Russell. I got to know him thru Malika – who I go to know thru Sharmila. I am not sure how she got to know her (was it thru Rejina in Dallas?) but I know both of them are painters. Many years later, we had discovered that another friend of ours from Dallas – Debjani – went to school with Malika in Kolkata and we had even managed to have a reunion for them at our house in Atlanta.

Russell’s biggest claim to fame – at least to me – is that he makes absolutely the best “kathi rolls” on this side of the Suez. On a good day, on that side of the Suez too. How this Georgia gentleman learnt how to make a Kolkata street food so well, I will never know.

What I did not know is that Russell is also a pilot. And now he is flying charter planes. Once I got past the surprise that I never realized Russell is a pilot, everything fell in place. He had a flight that morning and was taking off. She was messaging him from the Skyclub and he was texting her roughly where his plane was. Which was why she was straining her neck to look out so intently to spot his plane on the ground.

And that is how I had my first intersection point of this morning!

Malika, it was great to see you. One of these days, when Russell is on the ground, let’s catch a different kind of “flight” at a nearby bar!! 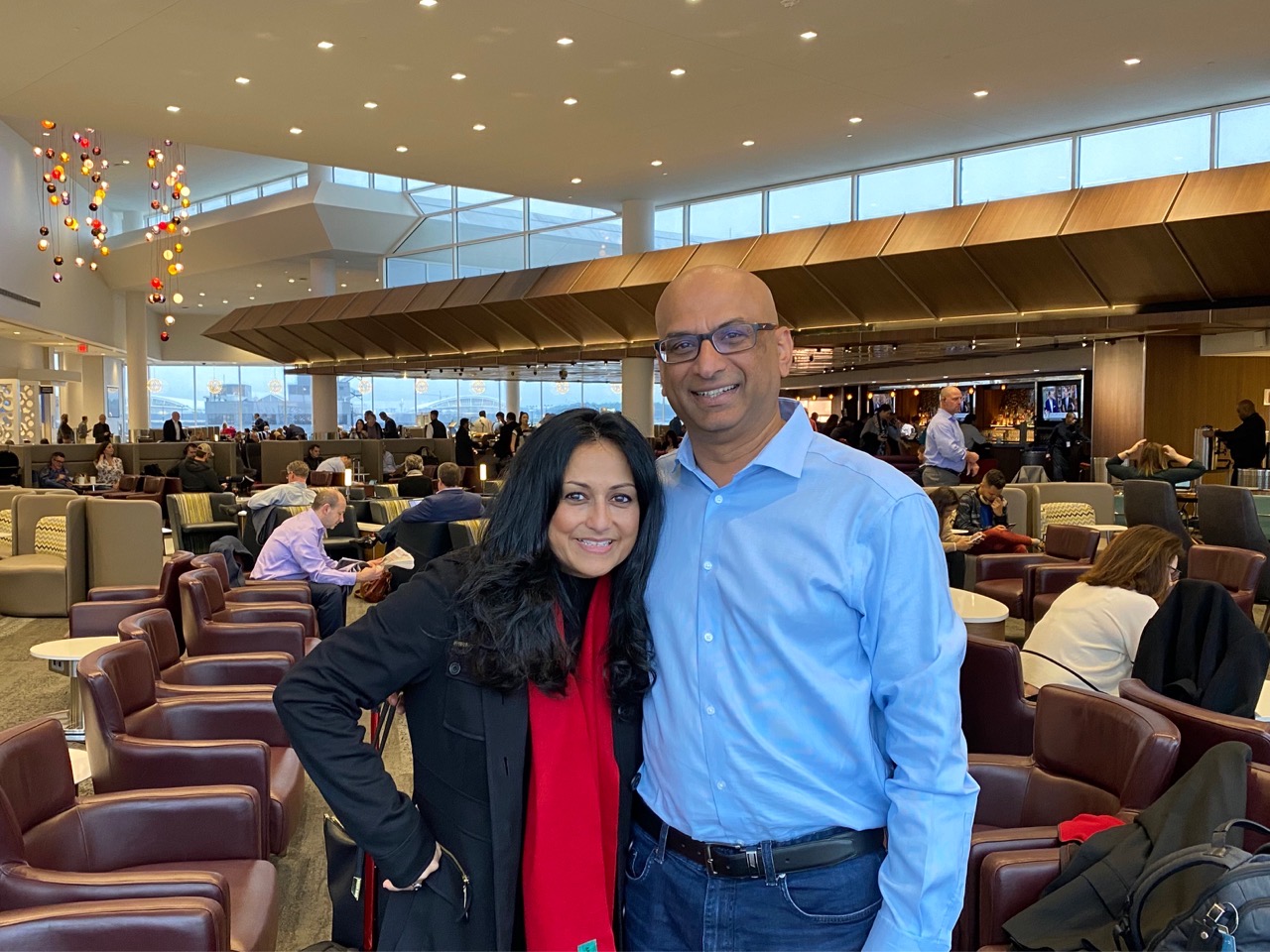