There was panic in the neighborhood!

After lunch yesterday, I asked my sister if she wanted to go out for a walk. I needed some exercise myself and I know my sister loves walking as an exercise. In fact, she goes for a long, brisk walk every morning.

“Can we take the route I take every morning? I need to measure the distance. Can you use your watch to find out?”

“Sure thing!” We waited for dad to snooze off and then we headed out.

Turns out, she walks a little shy of 5 miles every day (7.5 km to be precise). It took us 1 hour 14 minutes. When we came back, instead of going up to my dad’s place, we went to my sister’s place (which is literally downstairs one floor in the same building). First, I did not want to wake up dad. I was going to take him out for a ride on his wheelchair later in the day. Plus, my brother in law had come back from his work. Figured will go chat with him for some time.

About forty five minutes later, a neighborhood girl came storming into my sister’s house and started screaming something very excitedly. After we calmed her down, we figured out that the whole neighborhood is in panic mode. My dad, apparently is out on the streets by himself.

Now you have to understand that my dad can barely get up to go to the bathroom. For him to be in the streets is fairly unbelievable. Plus who was pushing the wheelchair? All these questions were swirling in my mind when my brother in law raised the curtain in one of the windows and there you could see him – in clear eyesight – standing at the street corner looking left and then looking right – with his walker in his hand.

That is a very dangerous sight. He can barely hear. He was bound to get hit by passing traffic. Without even bothering to call the elevator, I ran down four floors and in about a minute was with him.

Trying my best to keep my calm, I asked whim hat did he think he was doing there. Completely ignoring me, he demanded to know what took me so long?

Finally, I put the picture together. Looks like he had woken up – perhaps right after my sister and I left and my mom let him know that we had gone for a walk to exercise. He dozed off again and then when he woke up the next time, we were still not back. Apparently, mom had gone off to sleep (she takes sedatives for her psychiatric condition). Totally helpless, he grabbed his walker and shuffled his way down the elevator to the streets!

“Na, bhoy hochhilo gaaritey dhakka merechhe kina tokey”. (He was afraid that I might have gotten hit by a car or something).

The hilarity of the situation beggars description. He – who does not get up from bed and has not used the walker for over six months and cannot hear well is out there on the streets walking at about three feet a minute completely unaware of vehicles behind him worried that I AM THE ONE who might get hit by traffic.

The thought behind his action was overwhelming enough that I did not bother even gently holding him.

“Let’s go sit at that culvert”, I told him and we walked to a nearby sitting spot. 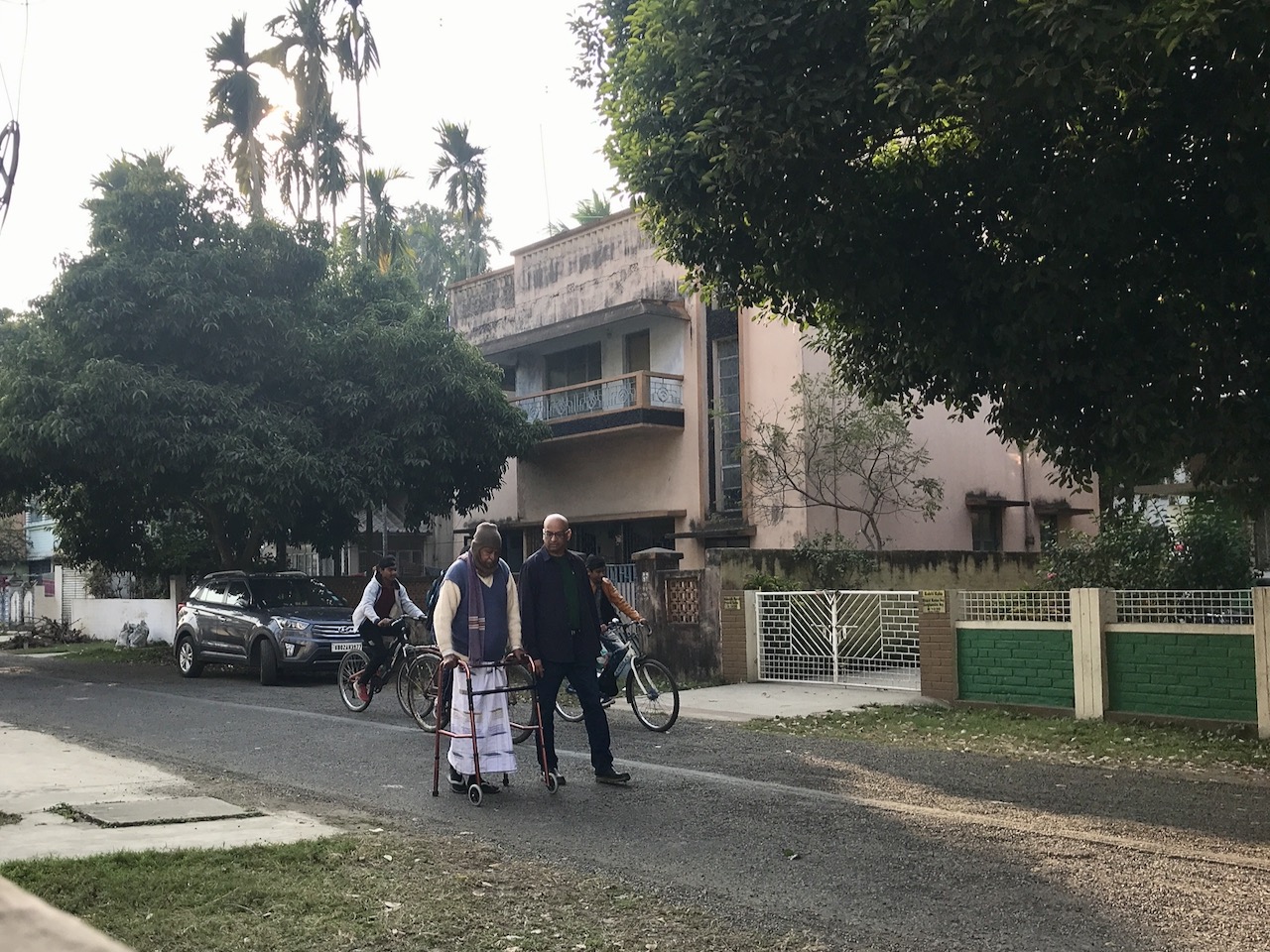