It is not what you know! It is who you know!!

That was a unique flying experience. First the pilot came on the PA system and apologized for starting 15 minutes late but the door was closed and he said we were good to go. At the same time, Delta sent a text message to all the passengers with the app basically saying – “No way, Mr. Pilot. You are going to wait for another hour after the fifteen minutes.” Not to be outdone, the pilot came back a few minutes later and told us that he was with the FAA agents on the phone and their basic message was “No way, Delta. You are going to wait for two hours after that fifteen minutes”. I turned around to my fellow passenger who had told the air hostess when she came around asking if anybody wanted drinks that he would wait till we get in the air and pointed out that he was being too optimistic!!

Anyways, we deplaned. And then replaned. “You again!”, I told the same nice gentleman who came and sat next to me. This time we started chatting about our jobs and all that. eventually, we got up in the air and we went back to our own things. Fifteen minutes later, I tried looking out of the window. He was sitting next to the window and luckily for me, he had it open. Not sure why – but all Delta passengers in the front keep their windows closed. I guess all that movie watching on their devices. I get mildly irritated that we are not able to see the clouds and the sky outside. Not so with American Airlines. Somehow their passengers always keep the windows open – at least every time I have taken American Airlines.

In any case, just as I looked out the window, my eyes glanced at the screen of the iPad my fellow passenger had. He was clearly listening to something intently thru his headphones. I recognized a person on the screen. I rudely interrupted him and asked

“How do you know this gentleman?”
“Oh! I do not know him. But he is a great guy. His name is Roger Whitney. He has this amazing podcast about retirement that I love to listen to”
“I know. I have known him for over 20 years.”
“Really? You know him? How do you know him?”
“Oh! We occasionally get drunk together at a bar and come up with plans to go to some crazy places in this world”, I replied nonchalantly.

I whipped up my iPad and showed some of our pictures from the Mongolia trip.

You could see that I had suitably impressed Mark Hensley (that being his name). I told him about Roger’s family history, his kids and his triathlon. Mark, who was already a super fan of Roger was starting to put him on the pedestal of a demi-god. Which Roger kind of is. But more importantly, Mark was starting to feel better and better about me due to the halo effect of the aforementioned demi-god!!

Mark wanted to know if he could talk to Roger some time. Apparently, he has been wanting to talk to Roger for a long time. So, I gave him Roger’s office number, admin name and email id. Again, with every such move, my stock was going up in Mark’s eyes.

I talked about how our families know each other … the great times we have had with Shauna, Spencer and Emma over the years.

Roger, dude! I gotta admit! You are a hero!! A hero who still cannot bend enough to enter a ger without hitting his head – but a hero nonetheless!!

As we were all getting to deplane, Mark asked me –

“So, you actually rode camels with Roger?”
“Yes, sir. And eaten camel meat too!”
“What?”
“And drank alcohol made from horse’s milk together in a nomad’s camp.”

(Apologize for the bad quality of the picture – I am not a selfie guy and the airplane was dark. He did want to take a shot of the iPad screen with Roger’s picture on it) 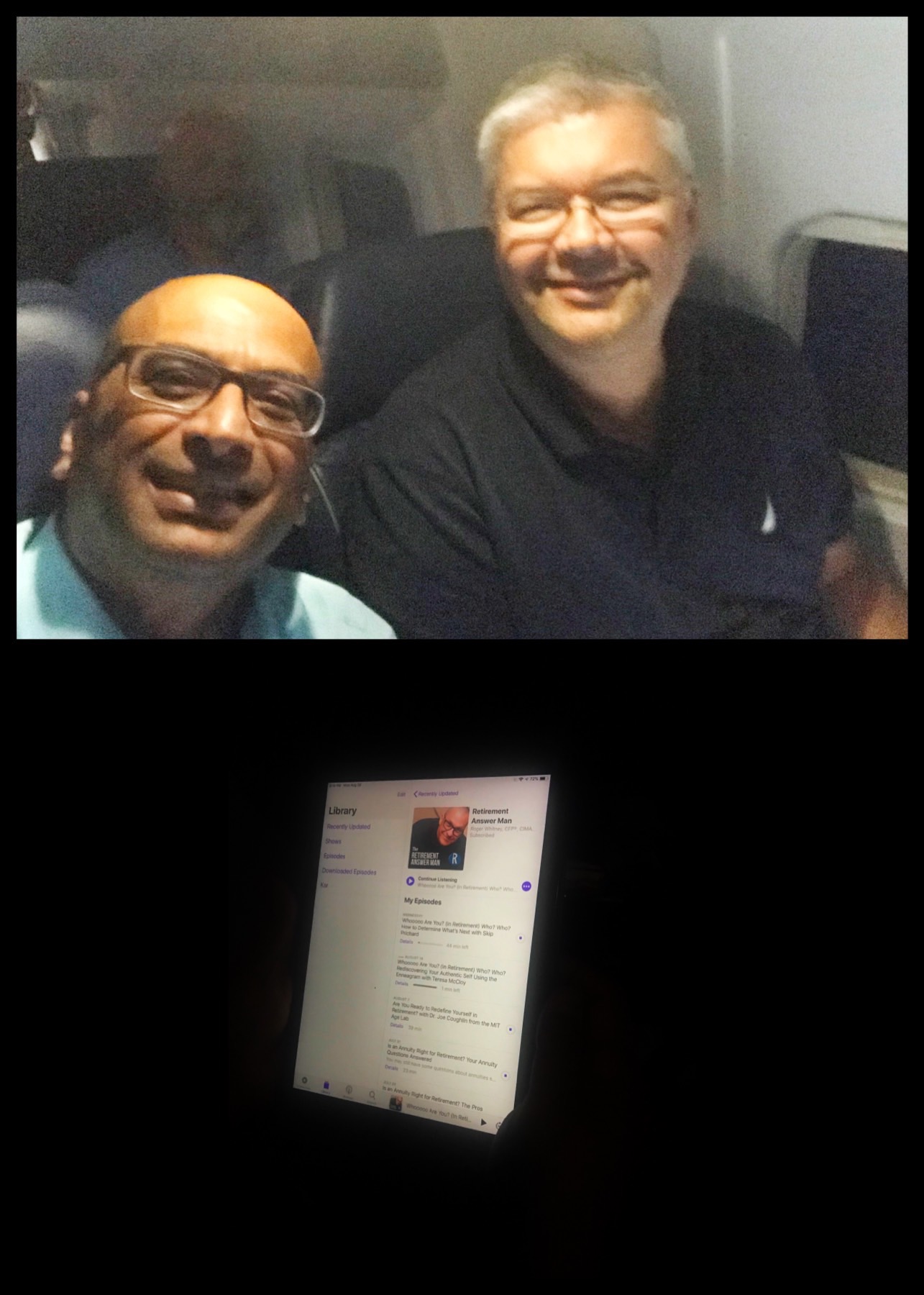