The saga of my poor suitcase!!

That grey suitcase you see being loaded onto the plane has had a traumatic day so far. First, we were booked on Delta flight 2449 from Newark that was to leave at 5:41PM. By the time I was done with my meetings today, I realized that I could skip lunch and catch the earlier flight or stay put with my original flight. Called up Delta and the lady said she could put me on an upgraded seat on the flight leaving at 4:20PM. Skipping lunch it was!!

Checked in my bag at the counter and settled near the gate. The plane was there. The bag was loaded and we were waiting to board within a few minutes when it was declared that one of our air hostesses was sent to JFK by accident, (One of these days, I want to be sent somewhere else by accident by Delta). In any case, it would be at least another hour and a half for the air hostess to find a route by road to our airport.

Not to be outdone, I called Delta again and managed to switch myself back to the original flight. I figured that there is no way anybody was going to plough thru New York city and then switch over to New Jersey and make it in an hour and a half. The problem now, of course, was that I was on one flight and my bag was on another. Talked to the gate agent and she arranged to pull my bag out of the plane and keep it plane side.

I thought I had outsmarted Delta! Well, to spite me, Delta simply took one of the air hostesses from my (original and now current) flight and sent the 4:20 plane off. With me sitting near the gate. And the bag sitting plane side!!

Well, the good news was that my 5:41 flight left the gate on time – with me and the suitcase. We went to the head of the live runway and the pilot declared that there was an air space shutdown in Atlanta due to weather. So we sat there for 40 minutes. And then the pilot came back and said that the Atlanta shutdown had been lifted. Except now there was a airspace shutdown in Newark. Apparently Air Force Two was coming in. And instead of sitting on the tarmac, we were brought back to the gate.

Saw the Air Force Two for the second time in my life (first time was when Cheney was the VP).

Eventually, they declared that we would be boarding in 5 minutes. And then in the next minute it was further declared that our plane had a mechanical issue. And we would have to wait for another flight to come in and then we would be switched to that plane. My poor suitcase was yanked out one more time.

Even the Delta app gave up and said that our flight was somewhere “Nearby”!!

Finally, we did get a plane and I got another seat by the window. Which was a good thing. Because I could take a picture of the much-thrown-about suitcase being loaded as the first suitcase in the plane!!! 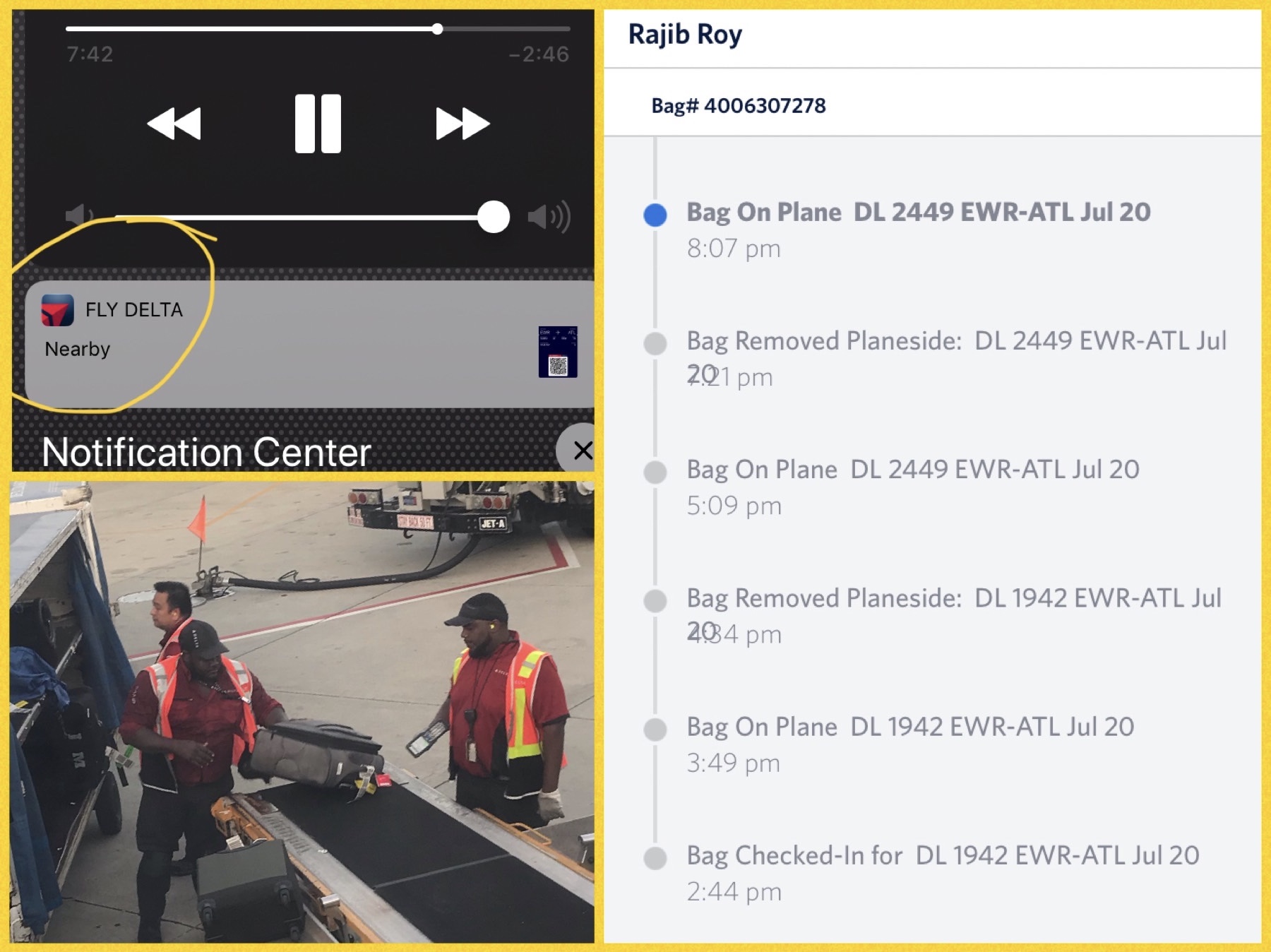