Sometimes, I forget how lucky I am…

The meeting in Boston got done on time. My next meeting was in Natick but I had some time in hand. Not being a big fan of the crazy parking lot fashionably called Mass Turnpike around this time of the day, I figured the most prudent thing would be to hightail it to Natick and wait out there.

“So, where are you from?”, I asked my Lyft driver as he rolled thru the traffic that was starting to build up on the Pike.
“Ghana”, he replied.
I played it totally cool. Like I knew everything that was to be known about Ghana. And casually dropped “Great! My daughter will be there next month for six months”.

Guess who got surprised? He looked at me in his rear view mirror and asked “Where are you from? Why is she going to Ghana?”
I explained that I am from Atlanta. Originally from India but not part of the Indian diaspora in Africa. Also that Natasha will be studying for her fall semester in the University of Ghana.

He seemed to be thrilled by those two facts. First, he kept telling me how Natasha is going to love Accra. And that people in America like me have very different understanding of Ghana and Accra from what it really is.

He then encouraged me to visit Accra with my family. And then quickly pivoted to India.

“You know Bollywood?”, he asked.
“Well, somewhat. I did not grow up watching movies and do not do so now either. But I know what is Bollywood”.
“My man, you do not know what you are missing. Don’t see today’s Bollywood movies. See the old ones. Watch Amitabh Bachchan movies. You know who he is right?”
I mentioned that I had heard of him.
That seemed to get him even more energized.

“You have to watch his movies tonight. You know his best movie? My most favorite movie in the whole world?”
“What?”
“Sholay!! You have seen it, right?”
I had to admit to him that I was probably the only one among 1.2 Billion Indians who has not seen Sholay yet.

He went on to talk about “Amar, Akbar, Anthony” and waxed eloquent on Dharmendra.

Having concluded that I had my fill of Bollywood trivia for one evening, i tried changing the topic…
“So, how did you land up in Boston?”
“Well, I have a very funny life story.”
“Talk to me”. Finally he was in my familiar zone. I am always up for listening to people’s stories – especially if they are funny. Bollywood is of no use to me.

What he told me was not in the least bit funny.

Foster Osei was born as a first child to a young Ghanian couple in Accra. Then when he was only 2 years old they put him in his grandmother’s home (from mom’s side) and left for London.

“Oh! Have you ever seen your father after that?”
“When I was 18, my parents visited Ghana. That is when I saw them.”
“What was your first feeling?”
“Anger. I was very angry that I had four siblings in London but nobody took me there. I still have nothing but anger for them.”

“You said you have two young kids, right?”, I asked.
“Yes man, 12 and 8”.
“How has that affected how you look at your kids?”
“Well, I had no idea growing up what a dad looks like or being a father figure looks like. My grandmother was my dad and my mom. When she passed away….”
You could see he was choking up.

“Sorry about your grandmother, man”. By now, I was trying to show some empathy by saying “man” like he was 🙂 But to push him back to his kids, I re-asked “How has that affected how you treat your kids?”

“I am always there for them. I do not miss any school event. Any picnic. Any holidays. I take them to New York in my car whenever we have time. I will never let them miss their dad.”

“Well, as hard it was, it seems it has made you a great dad.”
He thought for a second and sighed heavily. “Maybe you are right. Maybe it is all God’s design to bring the best out of me”

Turns out one of his uncles (mother’s brother) who was in the USA eventually did his paperwork and got him here and got him started in a small business. He has grown from there.

One touching part of this story… his siblings never knew about him for most of their lives. But the youngest one – a sister – just before she got married in London, made it her life’s mission to see her eldest brother she had heard about. She made it to Boston eventually, spent a couple of days with her elder brother that she had never seen in her life and went back to London to get married.

By this time, we had pulled up to the Courtyard.

“Would you mind stepping out of the car and take a picture with me? I want to send it to my daughter to tell her I have one more friend from Ghana. And to the rest of my friends just so that they get to know of your story”

As he finally left, I stood there with my overnighter and office bag waving at him and thinking to myself…. “Sometimes you forget, Rajib, how lucky you have been in life”. 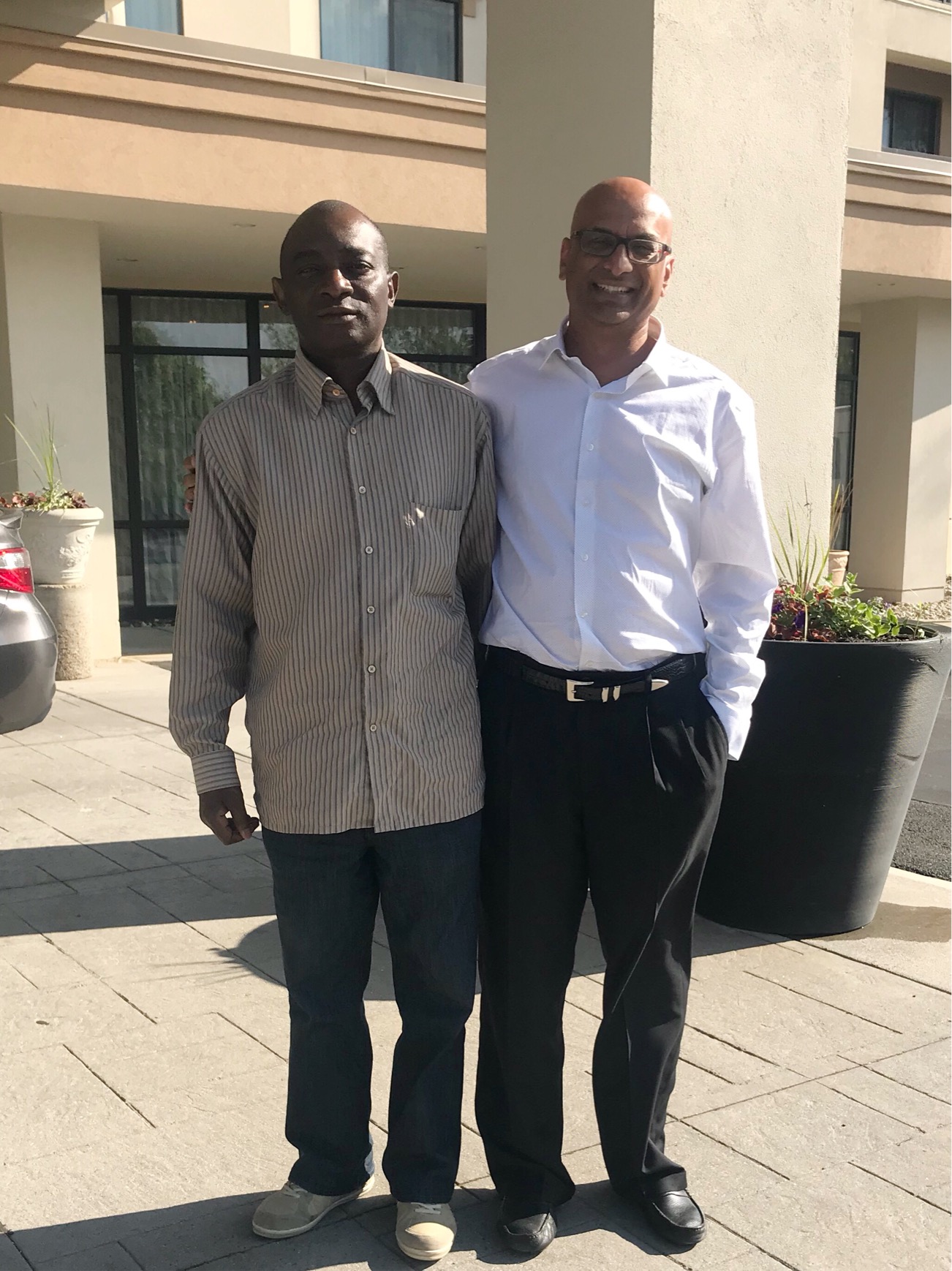