The remarkable journey of a young, unemployed Columbian

“I used sell perfumes in the streets”, said he to my utter disbelief.
“What?”
“Yeah! I could keep $7 for every $20 bottle I sold. I had to figure out how to make money”.
“So, you were selling perfumes on streets?”, I had to ask him to re-clarify.
“Yes. Not just streets. I would walk up to the banks and try to sell perfumes to the tellers. My first sale was actually in a truck stop”.

I almost lost my grip on the bourbon glass.

“You were selling perfumes in a truck stop?”
“Yes, that was where my first successful sale was!”

This story I got to hear!

“So, let me get this straight. You have a degree in Finance. And yet, you were selling perfumes? How does one become a CEO from there? Back up and start from where you were born.”

Over a glass of bourbon, sitting at a local bar, I got to know the remarkable life history of Carlo Martinez – the founder and CEO of Steppingblocks.com. Apparently, he knew me from a prior work experience and a couple of days back, had asked to have a social meeting with me and a common friend. First, I am glad I showed up. Second, I am glad that the common friend did not show up (although he owes us a drink now) – else I would not have known the full history of Carlo.

Born in Columbia to poor parents, he eventually found his way to USA thanks to his hard working dad who got a break in Coca Cola in Bogota and eventually did well enough to be moved to the US of A. There is a similarity in his story and mine – where my dad who used to till land revolted against his family and moved away from his village to get a break in a steel plant.

His father insisted that he pursue Engineering. (again, that sounded like Indian parents to me – it was either that or “become a Doctor” ). Carlo joined Georgia South. But did not like Engineering much at all. More out of a whim than any well thought out plan, he took a class in Finance. And fell in love with “NPV – Net Present Value”. Somehow NPV made a lot of sense to him and he decided Finance is what he was going to do.

Finished his degree in Finance. Right around the time the economy started crashing in 2007/2008. The job market was very tough. Especially for young college kids. For three long years, Carlo did not get a job. But he had to make money. His self assessment was that he liked to interact with people and probably would be good at selling.

Became a bartender. Well, those jobs were available and it got him to interact with a lot of people.

From there, in an effort to make more money – he started selling perfumes!!

“So, how did it feel to sell perfumes in a truck stop?”

“The biggest thing I had to learn was to get over the fear of rejection. It was not easy being brushed away by people in the street and being looked at funny. People could be mean too! But once I was able to get over that, it was much easier. Selling became a passion. Rich man, poor man, beautiful young lady, old sick lady – it did not matter to me. I saw it as a chance to establish a connection with a human being and see if we could do something for each other. I had a perfume to sell that might have value to them. They had money that I was trying to earn.”

“But”, he continued, “I also learnt that people can be good. Really good. I had to do door to door selling. Most people would shut the door on my face rudely. But then there were those who would go out of their way to be nice to me. Some would even call me in to have a coffee. Many would buy but many would not. But they empathized with my struggle and willingness to earn money the hard way. In an extreme case, I was once invited to have dinner with the family. I think they took pity on me – seeing as it is that I needed food – but that notwithstanding, I cannot get over their magnanimity towards me.”

Being a people person, he befriended a lot of the tellers in the bank that he used to try selling perfumes to. And that is how he got his first break. He was offered to be a teller – given his people skills – in one of the banks here in Atlanta. Actually the largest bank here.

Once in a corporate world, he figured out how to grow his career very quickly.

“What got you from being a teller to be a VP in a large bank?”

“Well, looking back, I think I was willing to work hard and because I had gotten over my fear of rejection – I would take lot more risks than others. I would seek the projects that nobody wanted, I would approach senior people in the company without any fear and like I said, I was willing to work very very hard. You will be surprised, sitting in a air conditioned room, when you think about those hot days on the street trying to sell perfumes, how quickly you can get motivated to keep working!!! “

From there Carlo eventually jumped to a company that both of us worked in. Apparently he had seen me there. But I cannot recollect that. And then he started his own analytics company and has been growing very fast.

With his level of passion and energy I have no doubt he and his company will be incredibly successful.

In one sign of weakness though, in his otherwise fine judgment skills, apparently, he has formed a good opinion of me. He has followed me and my work even after I left our old company and that is what made him seek a social meeting with me. Just for this once, we will overlook that weakness of his.

Without that, I would not have had a chance to meet this remarkable young gentleman!! 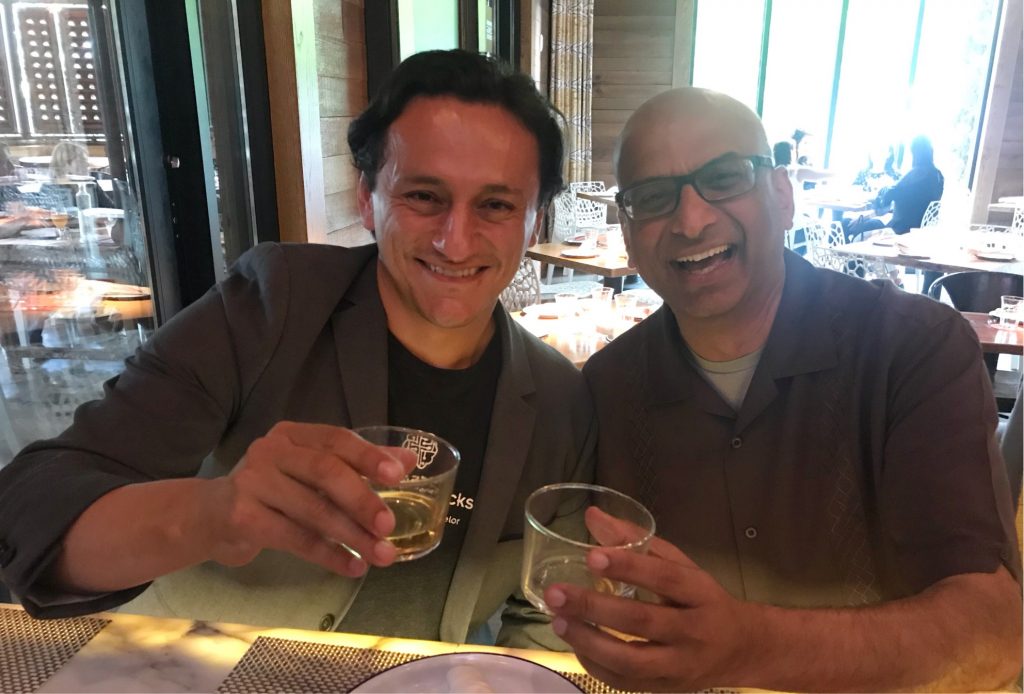 Posted May 17, 2018 by Rajib Roy in category "Intersection Points