The car finally left the asphalt and hit dirt road. We kept bouncing off the potholes and gave right of the road to the occasional goat, hen, duck, cow and even a pig at one time. Every half a kilometer we would ask somebody if they knew the house of a Uttam Dhara. He repairs motorcycles, we would add in case they struggled to place Uttam.

It was like playing pool. We would get bounced off the walls every half a kilometer till we stopped the car and walked down a very narrow lane and came to a house with a small kid standing in front.

“Uttam Dhara-r baari chinis?”
He quickly motioned to signal that we had reached the right house.
A lady came out from inside the house.
I could barely – just barely – recognize the face.

“Arati-di?”, I asked.
“Chintey paarchho?”, she asked if I recognized her.
I do not even remember what I gave for an answer as I was overcome with a surge of joy.

This had been a long wait. Even by my standards, this is was a tough search. The problem is I knew only her first name. I knew she was from some village near where my grandmother lived. And only God knew where she had moved after she got married. Trying to find such a person is akin to finding a needle in a haystack.

Arati-di was a domestic help we had at our home in Durgapur in the mid seventies. Both my parents used to work leaving the three of us often unattended at home. My grandmother used to find poor people near her village and ask them if they would go to Durgapur to be a domestic help. This would give them food and shelter and also some money for their families.

First, we had Pratima-di. Then we had Maya-di and finally Arati-di. I have made very little progress on the first two. But I had a breakthru on Arati-di when I had gone to meet Jagannath-da (if you remember, he was the farmer who used to put me on his shoulder to pluck mangoes) a few months back. I had asked a few villagers then about all the three ladies.

One of those villagers had said that he had heard Arati-di’s son repairs motorcycles but he had no phone numbers or anything. That, surprisingly, was a strong clue. After coming back to US, I called up my uncle who still lives in the old village and asked for the local guy who fixes motorcycle. You can only imagine my uncle’s surprise at his nephew from US asking for the guy in the village who fixes motorcycles!!

The idea was to rely on the network of motorcycle repairmen. I was hoping that somehow they would know each other between villages to exchange spare parts and all that. Believe it or not, after bouncing around a few of those motorcycle repairmen with the same question “Do you know somebody in your trade whose mother’s name in Arati? His mother would be in mid fifties. So son should be around mid thirties” – as the network grew further and further out – one day, I hit pay dirt. Actually it was late night. The family was at a party and I was sitting by the pool late night making phone calls to the villages.

One guy said his name was Uttam. And his mother’s name was Arati.
I explained that I was calling from US.
“Keno? Ki chai?”, he was a little frightened and demanded to know what was going on. Perhaps he was being protective of his mom.
I explained the whole context that his mom helped me grow up when I was a kid.
He was incredulous.

“Apni ki Debipur-er?” (Are you from Debipur?)
I told him that I was from Durgapur but I was born in Debipur and that is where my grandmother lived and my father grew up.
“Teen bhai bon?” (You folks are three siblings?)
Yes, Yes! I had yelled.

He let me know that Arati-di had talked about us a couple of times when he himself was growing up. He told me to call back in the evening when he would be home back from his shop.

Which I did and then talked to Arati-di and noted down her village name.

And promised to see her again.

As I was saying, it brought unbelievable joy to see Arati-di again. I could barely recognize her face and she could not have picked me out in a crowd, of course. But I was carrying a few old pictures from those days which I showed her.

We talked for a long time. She kept telling stories from those days how she used to take us out for walks. I remembered that she used to help us with our meals when we came back from school. I even remember she had taught me all the words of “Ikiri mikiri…. “ (it is a silly game young kids play to a rhyme).

As she and I talked, numerous – very curious – villagers dropped by. There were kids a few years old to very elderly people who were no doubt amused by this clean shaven head – shorts wearing – shoes without socks – profusely sweating guy who had descended upon them.

I met Arati-di’s entire family. Her husband, his brother and their side family, Arati-di’s son and daughter and their families, Arati-di’s three grand kids. And the three cows, a bunch of ducks and the sole rooster that is part of the family!!

She lives in a hut just like the one I was born in. Walls made of dirt, thatched roof made of straw. No running water, but there was electricity.

Eventually, it was time to go back.
“Eto dur thekey aastey onek kosto hoy. Abar aastey boltey bhoy hoy. Kintu phone koro chheler phone-e”. She said she was scared of asking me to come again given all the hardships she thought I had to endure. But she would look forward to phone calls on her son’s phone, she added.

Bouncing back again on the dirt road, we eventually got back to asphalt and the car sped off.

I was completely lost in my thoughts of how people like Arati-di was part of me growing up. Me growing up to be eventually what I am today. Whatever it is that I am today. And how strange life is. Two human beings came under the same roof for a few years and then our paths diverged completely. The paths could not have been any more different if they wanted to.

Nearly four and a half decades later, somehow, we were again under the same roof. This time, her roof!!

Who would have guessed?

Well, I certainly felt good that I have not yet forgotten who all brought me to the dance to begin with. 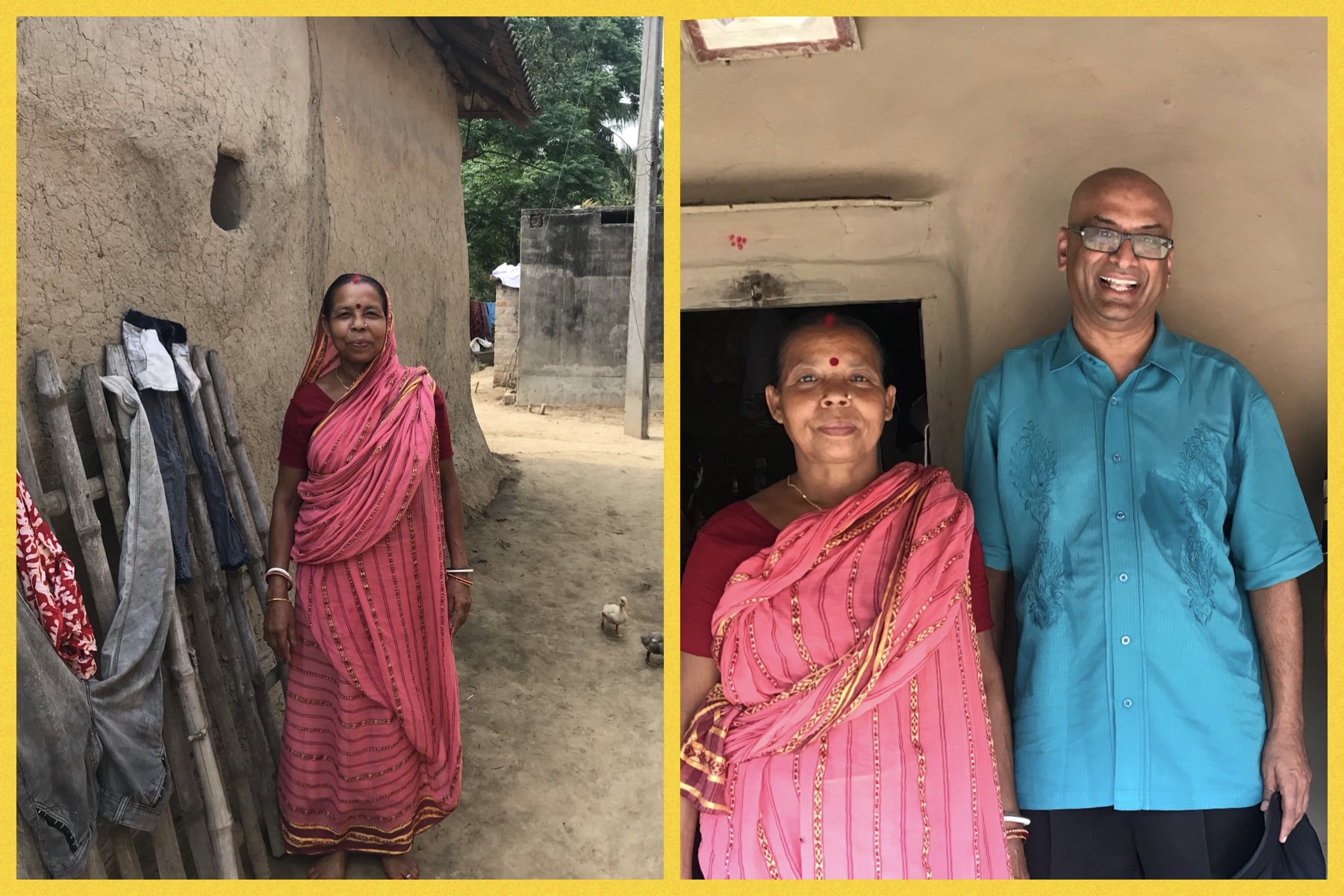