Roger Whitney piqued my interest in Stoicism a few weeks back. I had downloaded a few books to understand what he was talking about and started in a slightly unconventional way. Instead of reading about the subject, I first started by reading about people who have followed it.

The history of Cato attracted me. Supposedly a very principled person and Julius Caesar’s arch nemesis (who he viewed as somebody bent on destroying the constitution), he was most famous for how he committed suicide rather than live one day under Julius Caesar’s reign. Ironically, Cato’s son-in-law – Brutus – would be instrumental in the killing of Caesar a couple of years later.

I would give this book about a 6 out of 10. It portrays Cato fairly brilliantly. It does a great job of not steadfastly putting up Cato as just a principled person. In fact, it highlights the fallacies and foibles that Cato had too. The times that he seemingly compromised. And the one time that he did not – when it could have completely changed Roman history in his favor. All due to deep seated fears he harbored of Pompey’s ambitions. It also does a great job of the times that Cato stood up to the rest of the world and like the Twelve Angry Men got the world (or at least those who mattered) to his point of view.

The best contribution the book has is to trash the myth of the so-called greatness of the Great Roman Civilization. If anything, it lays bare the internecine warfare, the depth at which corruption ran, the mockery of democracy by bribes, the backstabbing, the temporary friendships, the brutal use of force and all those things you would not call a civilization by the adjective “Great”.

Where the book gets tedious at times is getting lost in seemingly unimportant details. The book that is 381 pages in lowest size font in iBook (on an iPad Pro) could have been easily put in about 150-180 pages and still contained the full import. (That readers may not have paid the steep price for that thin a book is a different concept altogether)!

The other place where the book failed me personally (less to do with the book, more to do with the fact I was trying to understand Stoicism) is the way the authors make fairly weak and sometimes extremely tenuous connection between Stoicism and how that must have affected Cato. As an example, he giving his second wife Marcia off to the sexagenarian Hortensius – and how that comes from Stoic beliefs of women and their (re)productive years is extremely tortured if not outright misplaced.

As an aside – and the authors mention it only once tangentially – the parallels between the Roman democracy during those years and contemporary US politics was intriguing to me. The influence of money; the conservative (often associated with the Republicans and Cato) versus the liberal (often associated with the Democrats and Julius Caesar), the use of filibuster, the “oppose everything the other guy stands for” … was almost prescient to me!!

Would I suggest you read this book? Not if you are trying to understand Stoicism. But if you had any interest in understanding Cato or the internal workings of the Roman elite (versus the public), it is a reasonably good read. A tad long though it might be. 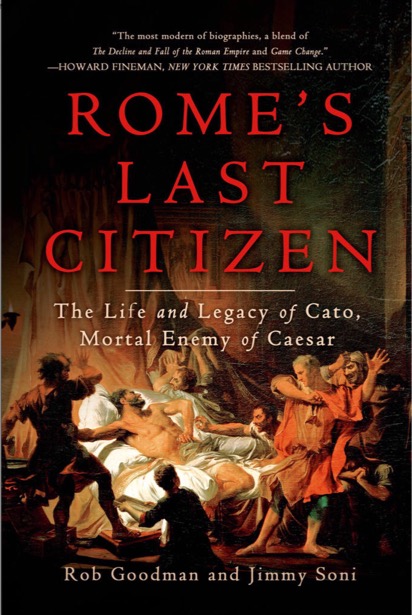