With windchill that was minus 4 degrees!!! Fahrenheit!!!

The day started at 4 am. Natasha had a morning flight to New York. I tried taking the car out. Could not even get past the driveway. Fishtailed it dangerously close to bringing down the fence a couple of times. Aborted it and got back into the garage and switched her flights to the evening.

Now that I was up, there was only one other thing I could do. Get out in the cold weather and attempt a run. Six layers on top, four layers below, three layers of socks (with grocery bags in between two layers to prevent getting wet), three layers on the head and a ski mask and off I went out in windchill temperatures of minus 4 degrees. (minus 20 Celsius).

Getting up to my gate itself was a big chore. My drive to the gate has three steep turns and I kept slipping down with every step. Eventually, got off the road and went thru the forest catching the trees on the way to give me balance.

Once on top of the hill, there was not a soul to be found. No marks on the road whatsoever save a set of tire marks and few scattered deer hoof marks. Running was out of the question. Tried a couple of times and nearly face planted myself every time. Went for the next best option – walked for two and a half miles (4K).

It was absolutely desolate. Not a single sign of life anywhere in the vast whiteness you could see any which way. Every time I looked back, there was only one set of footsteps on the road – mine own. The walk to the destination was not too bad. It was cold, undoubtedly. But I was dressed up for it. As long as I did not try to hurry up, I had enough grip on the surface to walk at a 17 min/mile pace.

The trouble started on my way back. What I had not realized – due to the outer layer of wind breaker – is that I had a strong 16 mph wind behind my back. As I turned around, it hit me squarely in the face. A few square inches of skin that was exposed in my face started burning . The wind was starting to make it thru the breathing holes in my ski mask too.

The best option for me at that point was to put my face down and put one my hands up close to the face and block the howling wind. The plan worked fine till I realized that the angle of my face made all the exhaled breath to go into my glasses which were so frigid that they fogged up. In one misguided and somewhat desperate moment, I tried to wipe the glasses with my gloves. That pretty much blurred up the rest of the glasses.

Now, I had vision of about a couple of yards from the lower end of the glasses. Everything else was blurry white. This is where the one set of tire marks – somebody in the morning made it out on the road – came in handy. The safest way to stay on the road, I figured was to stay in between the tire marks that I could see with my limited visibility.

Half a mile of devoid of any incidence later, I was feeling smug about my scheme to stay between the tire marks. In an immediate irony, that is when I also realized that I was in a ditch. It turns out whoever drove the truck in the morning missed the road at a turn and got into a ditch. And I had faithfully followed it. Straining to look at the tire marks in the yonder while lifting my face, I was pretty impressed by what I saw. The tire marks clearly showed that one side of the vehicle was in the ditch and the other side was still on the road – a clear two feet difference in height. Which is what made me conclude that it must have been a truck or SUV to have that much clearance.

The driver did not instinctively try to get the truck back on the road. Instead looks like she/he drove further off the road, making the side on the ditch climb up a little on the other wall of the ditch and reduced the tilt of the vehicle. Eventually the ditch evened out and you could see the truck had gotten back on the road. I further realized, at that point that all that deductive logic and marveling at the presence of mind of the driver was not taking me an inch closer to home. Which is when I climbed out of the ditch and trudged back towards home once again.

I cannot count that as a run, given the pace. So, we will mark it down as a 4K walk in minus 4 degree temperatures.

Score one for Mother Nature and me!!! 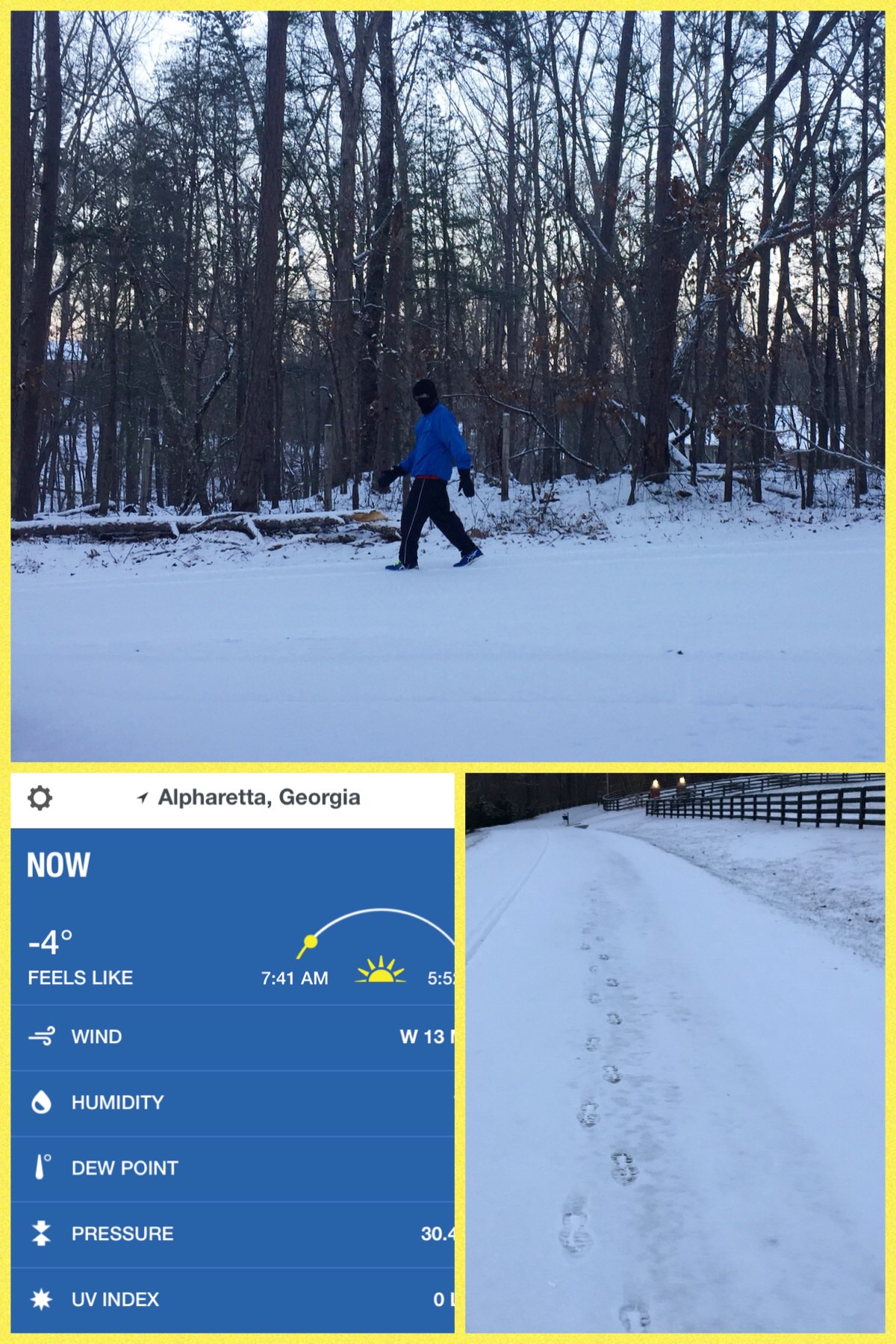