This is an interesting “intersection point” where a friendship was established. But no words were spoken. I am not even sure how to write about somebody that you have not talked to. But here it goes…

I had made a quick dash to Ahmedabad to meet a friend about some work related stuff. In between our meetings, we had strolled over to the Crowne Plaza next door to catch up on some food. We were sitting at our table in some deep discussions, when I realized that the waiter was standing next to me. Instinctively, I told him “Just a glass of water”.

I had almost turned my head away to continue with the discussions when I realized that the reaction from the waiter was not exactly what I was expecting. I turned back and saw him pointing to something hanging from a lanyard around his neck.

That is when I realized that he had no ability to hear or speak.

That is not an everyday experience I go thru. It took me a few seconds for the whole thing to sink in. Meanwhile, he fished out a small diary. Presumably for me to write on. I smiled at him and pointed to my glass. He got the message and went away.

But I was totally distracted the whole time. Multiple times, I saw him helping other guests so seamlessly. Did not betray any signs of shyness. He would interact with every guest with the same level of sincerity and proactivity as he would if he could hear and speak. Except of course, it was happening thru notes on a notepad and finger gesturing.

Finally, I told my friend that I had to meet Hardik again. I signaled him to come to our table. Which he did. And then I was stuck again. How do I ask him questions? How do I tell him that I was totally moved by his courage?

Presuming that I was ready to order, he brought out his notebook again and pointed out to some blank space below what I assume the previous customer had written – “Black Coffee”. Not knowing any better, I drew a long line and wrote “I am very impressed by what you have achieved!” and gave it to him. He read it and looked at me. There was obvious delight in his eyes. He did his namaste thing.

I turned the page and wrote further that if he wanted to be friends with me and chat, he could email me. And gave him my email address. He scribbled something over it. I turned the notebook around to read it.

Want to take a guess what wrote? He wrote – FB?

I am an idiot. What was I thinking giving my email address to a millennial? Facebook it was!!

He himself located his FB profile on my phone and sent himself a friend request!!!

That is how I had a memorable “intersection point” without ever talking!!

This story will not be complete without a shout out for Crowne Plaza, Ahmedabad. I am not sure whether this is a global practice for them or just in India or just in Ahmedabad. In any case, hats off for stepping up to the plate to make this a better and caring society. May your tribe increase. 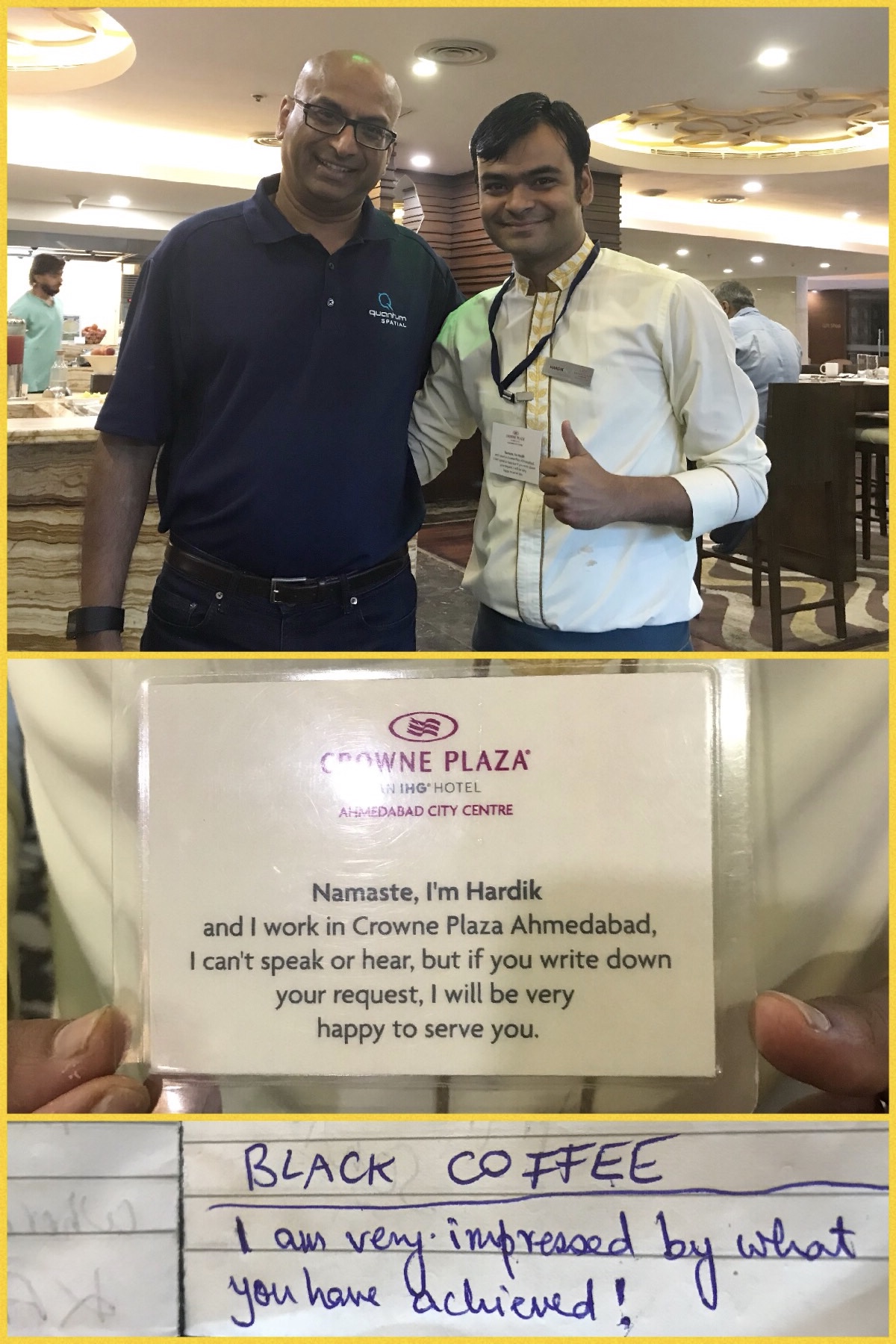