“Thank you for coming all the way from Kolkata to Ernakulam to see me. I feel very special today. Nobody has done that before”.
“No, no, no, that is not how it works”, I quickly responded. “I am the one who is here to say thanks for every way you influenced me when I was barely a few years old. In many ways I am today who I am due some of those early influences”.
“Plus”, I admitted, “You had asked me to come and meet you”.
“I did?”, she asked somewhat confused.
“Ah! You do not remember, do you? I will tell you that story”

That is how the conversation began the moment Mrs. George opened the door. She was my class teacher in first grade. Last time I had talked to her face to face was in 1973. This year, I had tracked her down to a place about 1500 miles away from where we used to be and had promised her that I would come and see her. Especially given the great difficulty she has in moving around (both her knees are shot) and the fact that she is valiantly fighting Parkinson’s, I was determined to make that meeting as quickly as I could.

After she slowly walked to her chair with the help of her cane and I settled next to her, I continued-
“You lived in Aurobindo Avenue. 5th street, right?
“Indeed”
“Back in the mid eighties, there was a girl on 8th street on your road that I used to be romantically linked with. One day, I was coming back from her house, and I ran into another old schoolmate of mine – Soumitro was his name. He lived on your street. He had mentioned that a year or so back, you had realized that he and I had become classmates after leaving your school. And you had asked him to ask me to come and see you if he met me again”.

“Not sure why – I believe I had gone back to my college a few days after that or I was feeling too awkward (and I was plenty awkward those days), I never came and saw you”.

After pausing for a moment, watching her take in the whole story, I finished up:
“Mrs. George”.
“Yes?”
“I know I took too much time. But I have come today and I have kept your request”.
“Thank you!”, she smiled.
“And I brought something for you”
“What?”

That is when I fished out a printout of a photograph I was carrying for her in my backpack.
“Do you remember this?”
“Looks like a class picture during Christmas party”.
“Indeed. Mrs. George! December, 1973!! I want you to keep this picture”.
As you see from the photo below, I spent quite some time naming the students and giving her an update on where they are and what they are doing. Much to my surprise, there were a few names she recognized instantly!!

The rest of the afternoon went remembering so many of our old teachers and me learning about her early childhood days in the rubber plantations near Kottayam district and her days after she left our school.

I got introduced to Mr. George. Mrs. George showed me pictures of her daughters and grandkids. I even got to see a picture of her from her wedding day!!!

If there was one meeting I never wanted to end, it had to be that one. First grade! First class-teacher!! There are still many more memories we did not get a chance to share! But I had two flights to catch before I could get back to my place (there were no direct flights for me). Reluctantly, I took leave.

“Rajib?”
“Yes?”, I looked back at the door where she was standing to say Bye to me.
“What happened to that girl from our road?”. I think she was trying to tease me.
“Oh! I married her!!”.
Going by the big laughter she gave, I did not think she was expecting that answer!

As the Uber guy started our one hour drive back to the airport, I felt a surge of emotional high for being able to see Mrs. George after 44 years to say Thank you. As well as the simultaneous pangs of the inevitable question – Will I be lucky enough to get another chance to finish off a few more stories? 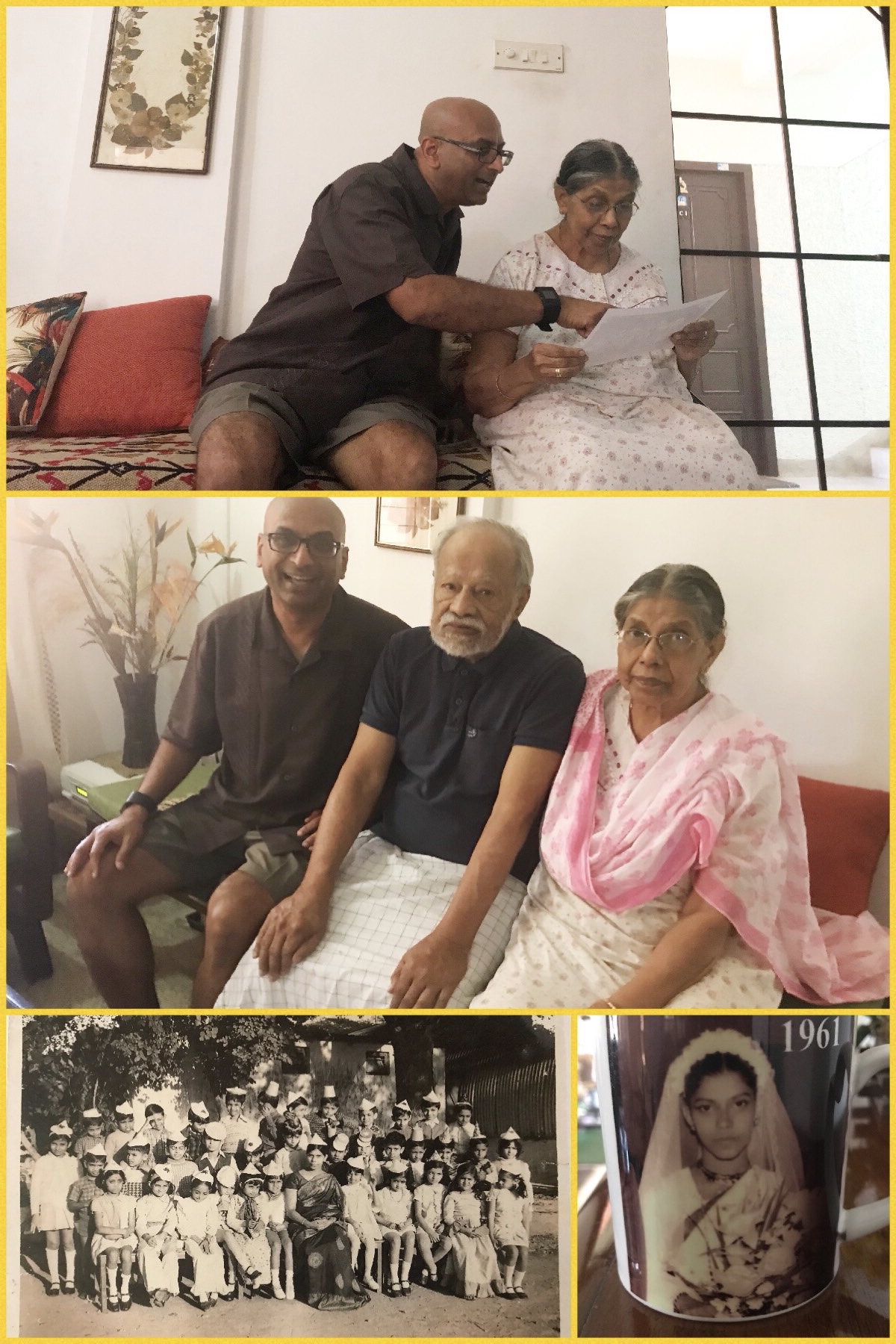