Did not have to wait too long for the first intersection point.

It was a big surprise though. To begin with, this was my first day in Bangalore for work. Went straight from the airport to the office for a day filled with back to back meetings. Thus, I was not expecting to have any intersection points.

One of my meetings was with a partner company in Bangalore in their offices. As I walked in to the conference room, I was introduced to all their members. When I said Hello to the CEO, something told me that I had seen that face before. During the meeting, as he talked, I became even more convinced that this was not the first time I was meeting him. But for the life of me, I could not place him at all. I thought of all the Bangalore work connections I had from the past but just could not tie things up.

During the break, I tried my usual quizzing about the past to see if our paths indeed had crossed or I was just confusing myself.

After a few more dead ends, I first started making some headway once I realized that he had worked in ISRO in his previous life.

“Were you in Dehradun?”, I asked.
“No”.
“Where all were you posted?”
None of the answers – which included Kolkata – offered me any clue.

“Kolkata has an ISRO office? I did not know that”, I confessed to my ignorance.
“Yes, in New Town. I opened the office there. I moved our lab from Kharagpur to Kolkata”.
“You were in Kharagpur?”… I think I started to get an idea
“Yes”
“In RRSSC lab, by any chance?”, I was warming up quickly
“Yes. How did you know that?”
“Second office to the right as you enter thru the main door?”, I persisted, ignoring his question.
“What? I don’t remember that. Maybe it was. How do you know?”
“Do you remember the first office on the left – diagonally opposite to you? There was a Mr. S.K. Ghosh there. Do you remember him?” I was hot on my trail… I was peppering him with questions after questions..

“Of course, I know S.K.Ghosh. In fact, he was in my team. He has become a professor in IIT now but we still work together on projects. In fact, I was supposed to meet him in Delhi today but I canceled it since you are here. He is a very smart guy. Wait!! How do you know him?”

“Well, I am not so sure about the smart guy part but I married his sister. He is my brother in law!!”

“Really?”, he was totally flummoxed.

“And you may not remember me – I had a head full of hair. Way back then – I cannot even remember the time frame – late 90s? early 00s? – I had visited you. My brother in law had taken me to his lab to pick up some printouts. And you were there in your office. And he had introduced me to you.”

For a few seconds, Dr. Jeyaram had no idea what hit him.

But I did hit him for a couple of drinks in the evening and we talked about that incident a little more. In fact, he even called up my brother in law from his phone and told him the story in front of me!!!

As I write this up from the airport for my exit flight from Bangalore, I got another call from him… he still cannot believe that our paths had actually crossed once before!!! 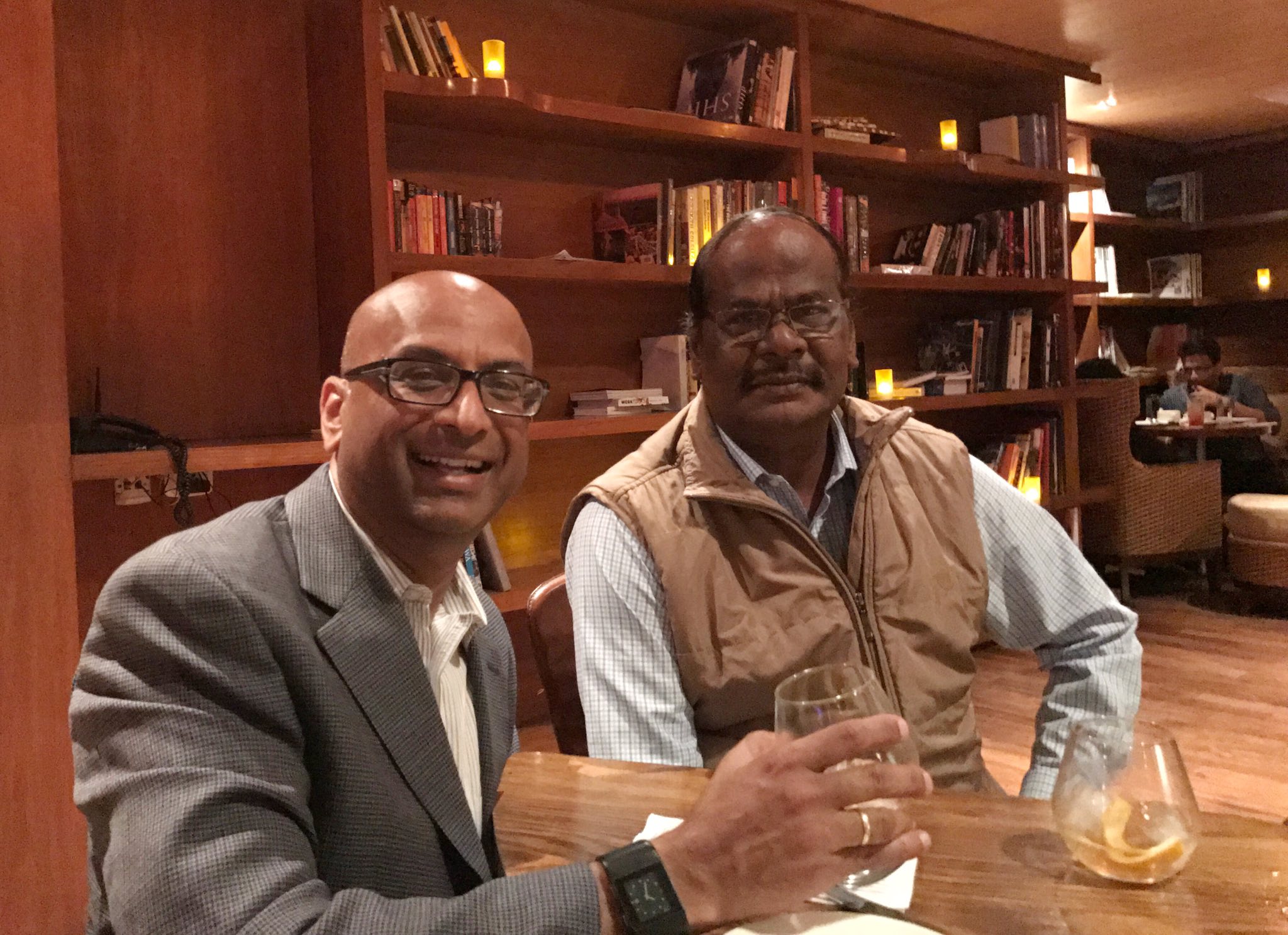