Can you believe it? This guy used to sit next to me in my fourth grade!

I cannot exactly call him my benchmate since we did not sit in benches. Instead, we had individual desks. Desks that had a cubby space to keep our suitcase and our prized tiffin box. And desks that had the top sloping in into you so it was more natural for you to read and write at that angle. Except that those slopes would always roll my black and red 2B Nataraj pencil down and then drop off to the floor. This guy – Ajay Lahiri – as I said who sat in the next desk – being the ever kind person that he was, would find the pencil, pick it up, realize that the tip was gone and would go ahead and sharpen it for me with his small steel colored sharpener.

Then he would point to the top of the desk where there was curved dip created in the desk specifically to keep pencils. And for the life of me, I would never remember to keep my pencils there.

Mousumi, if you are reading this, you probably remember that he sat caddy corner from you (you were right behind me) and in front of Sayanti (who, for the life of me, I still cannot locate). And Subir, if you are reading this, you may recollect that you used to sit perpendicular to us, facing the teacher and Ajay and I were to your immediate left.

Forty one years later, I managed to catch up with that guy again!! (I left that school in 1976). In New York City!! I had located him a few years back but all our past attempts to meet had failed.

When I woke up early in the morning, I was super excited that I was going to see Ajay after so many years. So many memories started floating by. I remembered his parents. I remembered his house on Short Road. I remembered he had quite a few brothers and sisters but could not remember how many. And I remembered how frail and fair complexioned he was.

Then something more mundane struck me. We had agreed to have a coffee early in the morning in Grand Central Station before he had to go to office. Now, if any of you have ever been to Grand Central Station, it is a veritable junction point of multiple streams of people seemingly aimlessly coming in and out. To pin point somebody there is not the easiest task.

That is when I came up with a “bright” idea. (I tend to have those before I have my coffee and actually wake up). I was in Central Park. So that was about one and a half mile away from Grand Central. I put on my brightest orange running shirt and shoes and started running towards Grand Central.

I reached about ten minutes early. Milling around the human waves there, I was reassured of one thing. Among all those sharply dressed, skirted, suited, booted and otherwise formally dressed office goers, there was no way Ajay could miss my bright orange colors. I was hoping that he would not ignore me as one of those construction workers with similar orange colors who seem to be perpetually digging up something or the other in the city!

As we sat down over a cup of coffee, we caught up on a lot of things. Thirty minutes was way too short. But if I was going to have to wait for forty one years, I would take even a three minute meeting. Together, we remembered a lot of our friends and teachers (fortunately, I was able to give him updates on their lives to him). It was great to catch up on his kids (two daughters of identical ages as mine), his parents and his brothers and sisters!!! But above all, it was great to see how the guy who sat next to me in his red shorts and white shirt forty one years back has become such a successful and happy human being!

Running back to my hotel, I could not help reflect on how incredibly lucky I am in life that I crossed paths many many years ago with so many incredibly great human beings. And that even today, I am able to bend the path of my life to go meet theirs… 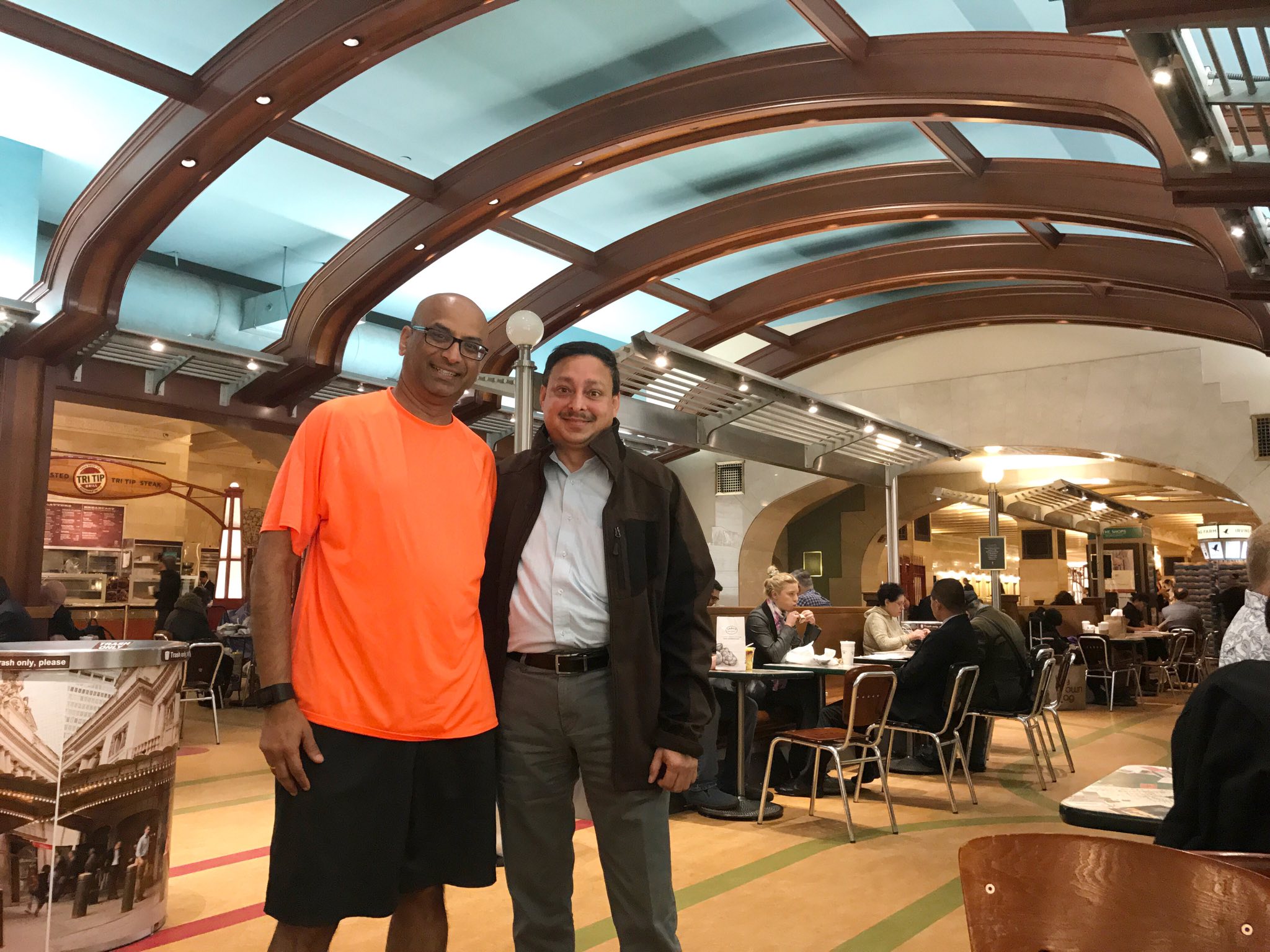 Posted May 18, 2017 by Rajib Roy in category "Intersection Points