This year, when I had called up Gary Brooks to wish him a happy birthday, I also learnt that his daughter was going to be in Georgia Tech and that he was going to come and help her settle down. We agreed to meet up.

The day could not have been any brighter to meet this colleague of mine from yesteryears. We sat down out in the patio of a local restaurant with some nice drinks and finger food to catch up with each other.

I remember hiring a few people who worked for Gary (he was in a different company) into our company. I also remember having lunch with him, just like the present day, and making a case that he needed to follow his teammates. Which he eventually did – but not in the same group as mine.

“So, how has life been after i2 on the work front?”, I asked after we settled down. Gary laid out an interesting story of how he has been very satisfied work wise by being very clear on what he wanted. Apparently, his criteria was (*) that he would have a good time (*) he would continuously learn new things (*) and that he would earn some money on the way. “That has been the magic for me. By staying true to those criteria, I have always stayed happy professionally”.

To understand the simplicity of his demands, one has to understand his times growing up. Born of two hard working parents who had to toil hard to make all ends meet, Gary, by his own submission was not the model high school student.

“What did you do?” I asked
“All the wrong stuff that you don’t want to discuss”.

One day, as a last resort, his mom got him a job in the local Quaker Oil shop where he worked on daily wage. As he put it, that shaped a lot in terms of what he wanted to be (and not).

Then his mom sent him to college. Much against his wishes. The first day was not the easiest for him. Somehow he had signed up for an advanced course (I forget the subject – was it Physics?). There he was, not having studied much in high school, facing some of the best and brightest in the college. “The teacher talked about 3D vectors and most of the students were used to 2D vectors. And I was the one asking myself – What is a vector?”

That evening was the defining moment for Gary. After college, completely baffled and frustrated, he sat himself down and holding his head in his hands, wondered what was he supposed to do. Above all, the prospect of living the life working at the Quaker Oil scared the beejejus out of him. And from that day, he resolved that he would get back in the game.

It was not an easy fare to fight back. Other than his resolve, he did not have much more going in his favor. But he kept at it. And it seems, had his epiphany during a class in computer science when he suddenly understood how recursion worked. I told him that my theory was that understanding recursion was easy. You first understand recursion, then the rest is easy. (I think computer science students will get this joke). Jokes apart, that was it for Gary. From that day, he fell in love with Computer Science and to this day has stayed true to his trade.

Of course, he must have reached his nadir of computer science when he tried explaining REST Api and higher order languages like Python to me over lunch 🙂

On my drive back, I was amazed how life has its own way of working out if only you resolve to try. I had no idea about Gary’s background. I always thought of him as somewhat of a technical guru and his people had a great opinion of him as a manager. Who knew how much trouble and difficulty he had to overcome to go there?

I need to bookmark this post. Every time I see a kid who might be looking for direction in life, I know who to send them to!

It was great seeing you and getting to know you better, Gary!! 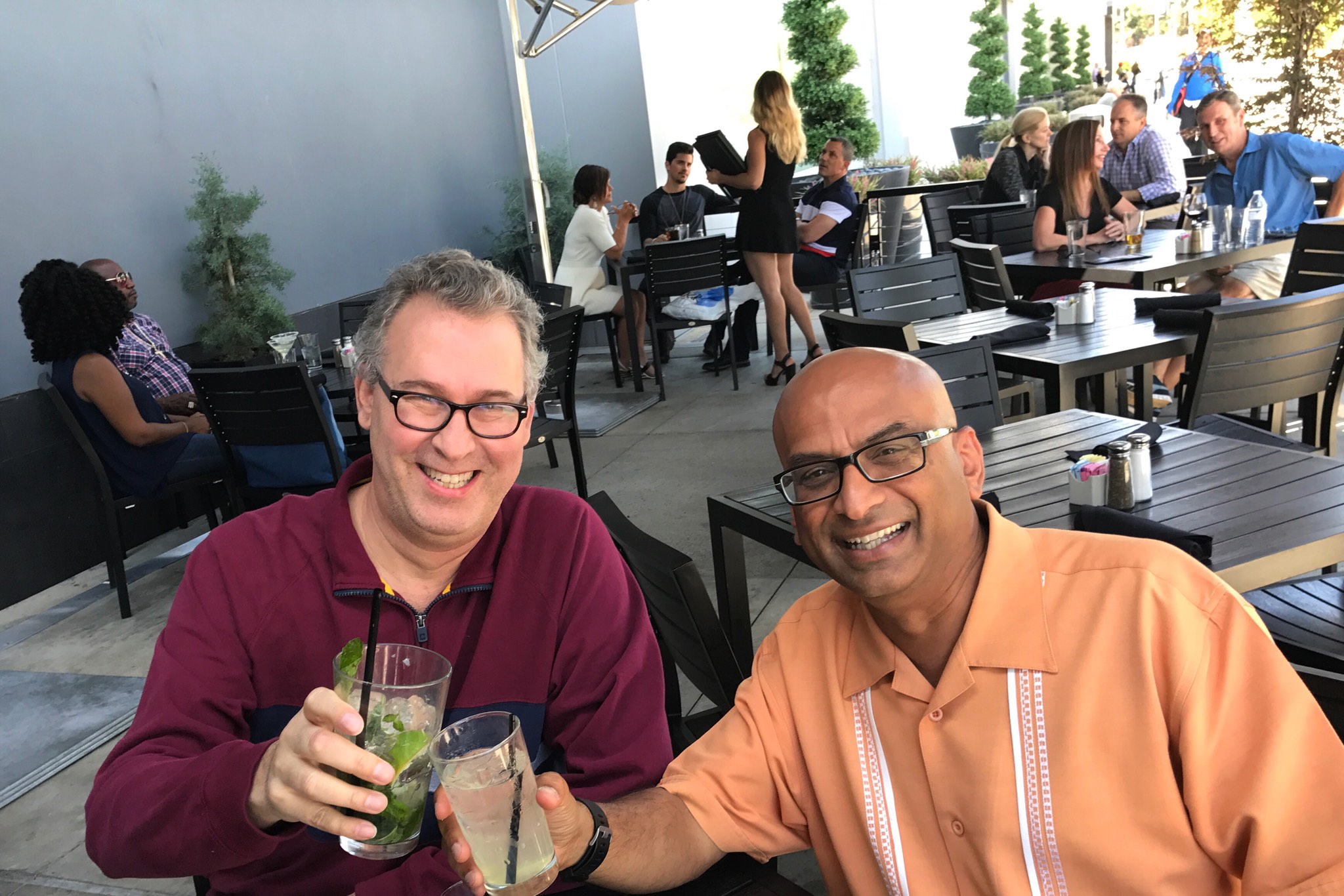 Posted May 14, 2017 by Rajib Roy in category "Intersection Points