The difference between the ordinary and the extraordinary? It is really in your efforts to find it out…

I hopped on to the Marriott Hotel pick up shuttle at Baltimore airport and a few seconds later, as the driver closed the door, I realized that I was gong to be the only passenger for him. That was as good an excuse as any to make a new friend…

Me: “Are you from this area?”
He: “Well, I was born in northern Minnesota but I have lived in Baltimore for over 60 years!”
Me: “Ah! You are a native for all practical purposes. How long have you worked with the Marriott group?”
He: “4 years”
Me: “How did you get in this job?”
He: “Well, my friend who worked in Marriott asked me if I would like to drive. I said that I could drive. He asked me if I could drive around in circles. I told him that I was 70 years old. I could drive around in circles”.

It was a good thing that there was nobody else in the bus because I laughed out too loud. It was that matter-of-fact way he put it that he could drive in circles.

He: “And that is what I do all day. Airport to Hotel and back again!!”
Me: (after I had gained composure): “What did you you do before that?”

The answer to that question was stunning. Over the next few minutes, I found out that Bob Meade – the gentleman who was driving me around – was World Ranked #2 bass drum player in his hey days (I believe the competition was for drum players that were part of bagpiper groups).

Turns out that in school, he wanted to play bagpipes. “I gave it up for humanity. I really sucked at it”. Again, I laughed out aloud at his way of putting things. But apparently, his group kept pleading him to come back. So, he gave it a shot in playing bass drums. And never looked back from there.

The story was so unbelievable that as I was going “Really, really?”, I quickly punched in this name in Google and sure enough!! His picture and his background came up!! Glancing at a line there, I asked “You have actually written a book?”

“Yes! It is called Keeping The Beat. I am working on a second one”.

I was so engrossed in the discussion that I had not realized till a cold whiff of air hit me that we had reached the hotel and he had opened the door for me. There were a few people waiting to get in.

Very quickly I asked him if he would be there when I would go back to the airport. Alas! he was going to finish his shift in an hour.

Me: “Can I take a picture with you?”
He: “Sure. Just make sure that my face does not break your phone”, he said, with his, by now common, self deprecating humor.

I again laughed out loud as I jumped from the bus and briskly walked passed the rather intrigued set of passengers waiting to get on. 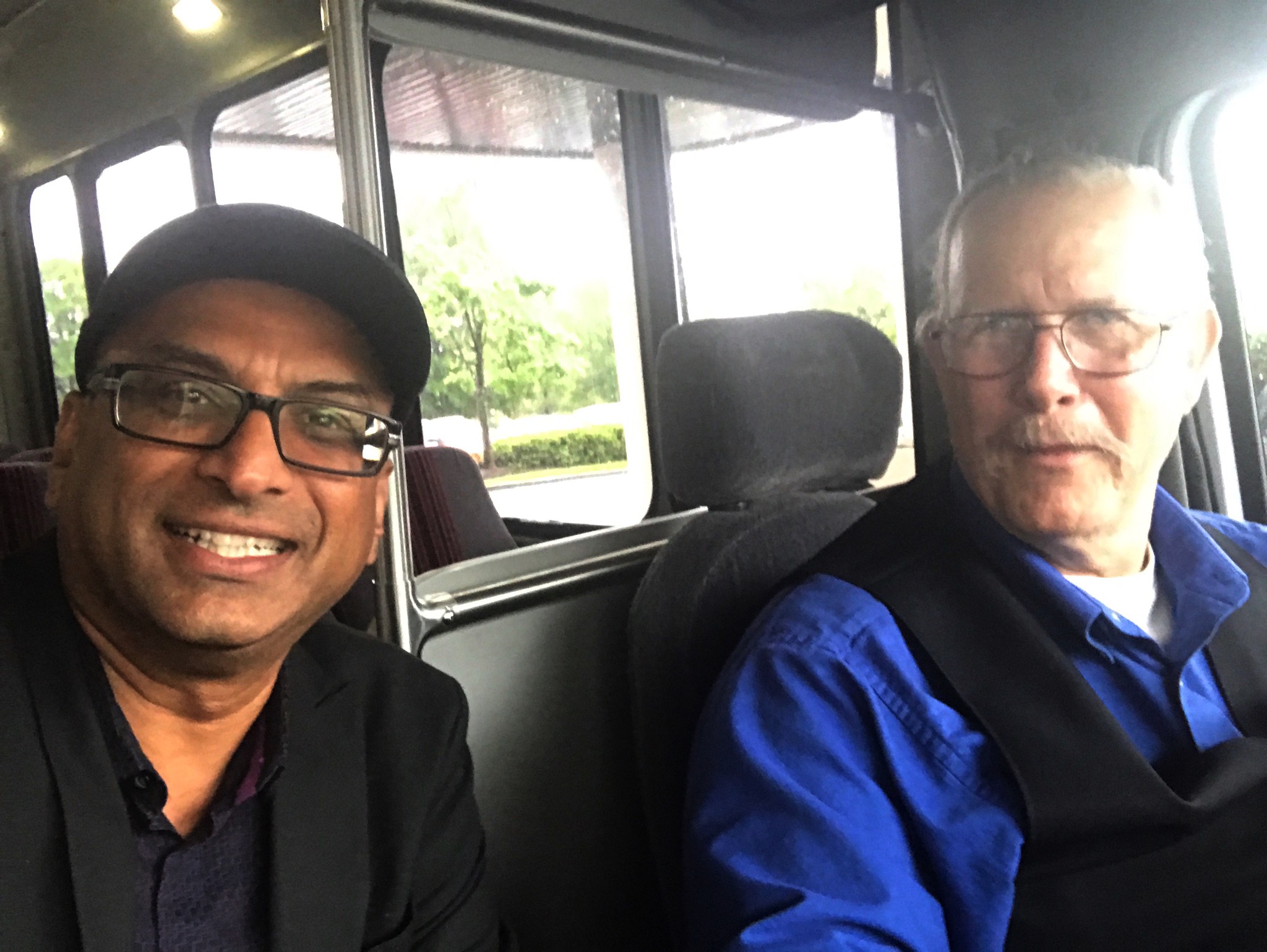