She is officially the earliest teacher in my life that I got in touch with!!

The day was Jan 15, 1973. I was a tiny tot – all of six years old – when I got down from a strange looking bus – it was more of a re-purposed police van really – to a very foreign environment. I got out of the bus and stared with somewhat trepidation at my new school. That was my first day of being a first grader in Benachity Junior High School.

I trudged along the school entrance path and unlike other smart students, took some time to find my class. I was one of the last ones to arrive and found myself a spot in the very last row of benches. I was pretty nervous. Not really sure who talked to who first that day, but I did strike up an awkward conversation with the boy next to me. Turns out his name was Ansuman Mitra. Actually it still is. And we are still friends and see each other about once a year! “I have a new blue tiffin box”, I remember telling him. That, clearly, was the only thing I could talk thru my awkwardness. Probably, also the only thing that I was looking forward to that whole day.

Presently, a teacher came and announced that the class we were sitting in is 1B. Apparently, 1A still had a few benches unoccupied. And some of us got randomly picked and shooed away to the class next door. That is how I landed up in class 1A. And my somewhat budding friendship with Ansuman was cut short prematurely. In reality though, I sought him out during tiffin (recess) period to show my tiffin box 🙂

Well, it was that random choice that got me in front of my class teacher – Miss George as we called her then. I have but only a few memories of those days. Miss George teaching us English was one of the highlights. There was a red book and a yellow book. I remember some of the contents inside but most of it has faded off. I suppose they were filled with the letters of the alphabet and a lot of pictures.

One of the lasting memories I have about Miss George was that during one of those tiffin periods, I had fallen down (don’t worry, I was not athletic ever; it was not like I had a grand fall while trying to kick the soccer ball or something – it was indeed an ignominious case of me slipping on a stair right next to where they used to ring the big dong announcing that a period was over) and had bruised myself. Miss George had somebody get some medicine (Boroline?) from head teacher’s office and applied it on my knee and put me to ease.

Much later in life – around the mid eighties, somebody told me that Miss George lived somewhere near Aurobindo Avenue (I think that was the street name) and that she wanted to see me. I was such an idiot – and also a confirmed awkward – that I never took that opportunity to find her out and meet her.

Well, that particular memory has gnawed me for a long time. Ever since, I have approached many a people from my past with the “Do you know a Miss George from Benachity Junior High School?” At some point of time, I learned that she had left Durgapur and was in Kerala.

That long search of mine was put to rest last week when Mrs. Bose helped me get her number. It was with great consternation, I called that number. How do you approach a person who taught you forty four years back and somebody you never have talked after that?

“Is this Mrs. Lily George?”
“Speaking”
And all that awkwardness came over me again! “Errr… You will not recognize me but you were my class teacher in first grade in 1973”.
“Oh!”

I recognized that I needed to back up my point a little more. So, I told her about the school, the other teachers and my recollection of how she looked and most importantly that picture she took with us after gathering all the classmates during a Christmas get together.

The conversation, from then on flowed very fluidly. I got to know about her kids who are both live outside India. I got to know about how she has settled down in Ernakulam. But I was most disheartened to hear how she is having a tough time with her knees. And this is in spite of the fact she already had one surgery.

She took down my contacts. And as I spelt my name – something seemed to stir in her memory. “Rajib Roy. Wait a minute. Were you not the first boy in class? In fact you were the first boy all throughout school, right? I remember you very well. I had heard that you did very well in high school too”.

Well, that was really awkward and embarrassing. First, me doing well in studies had more to do with my relentless parents. I was an unwilling participant. But there were other first boys and girls too (We had many sections). So, I was not sure that was my calling card. But most of all, I was afraid that she might say “Hey! Later on I actually wanted to meet you once. Did you ever get the message?”.

Once I kept the phone down after promising to keep in touch with her, a flood of memories of my classmates from those days started floating thru my mind. Suddenly, I remembered something. I went upstairs, opened up the computer and after some search brought out a picture from that Christmas party of Miss George and all my classmates together. From Dec, 1973. I had digitized it and kept it thinking someday it might come come in handy.

My next mission is to get that picture to her somehow. You never know. My awkwardness knows no bounds. One of the India trips, I might just show up at Ernakulam and give her a printed copy of the picture and let her know that her teachings and guidance is going forty four years strong. With no apparent sign of abating!

What a great feeling it was to actually talk to somebody who is till date, my earliest teacher that I have been able to track!!!

[I am the kid with a squint in the left eye standing in the last row, third from the right of the picture] 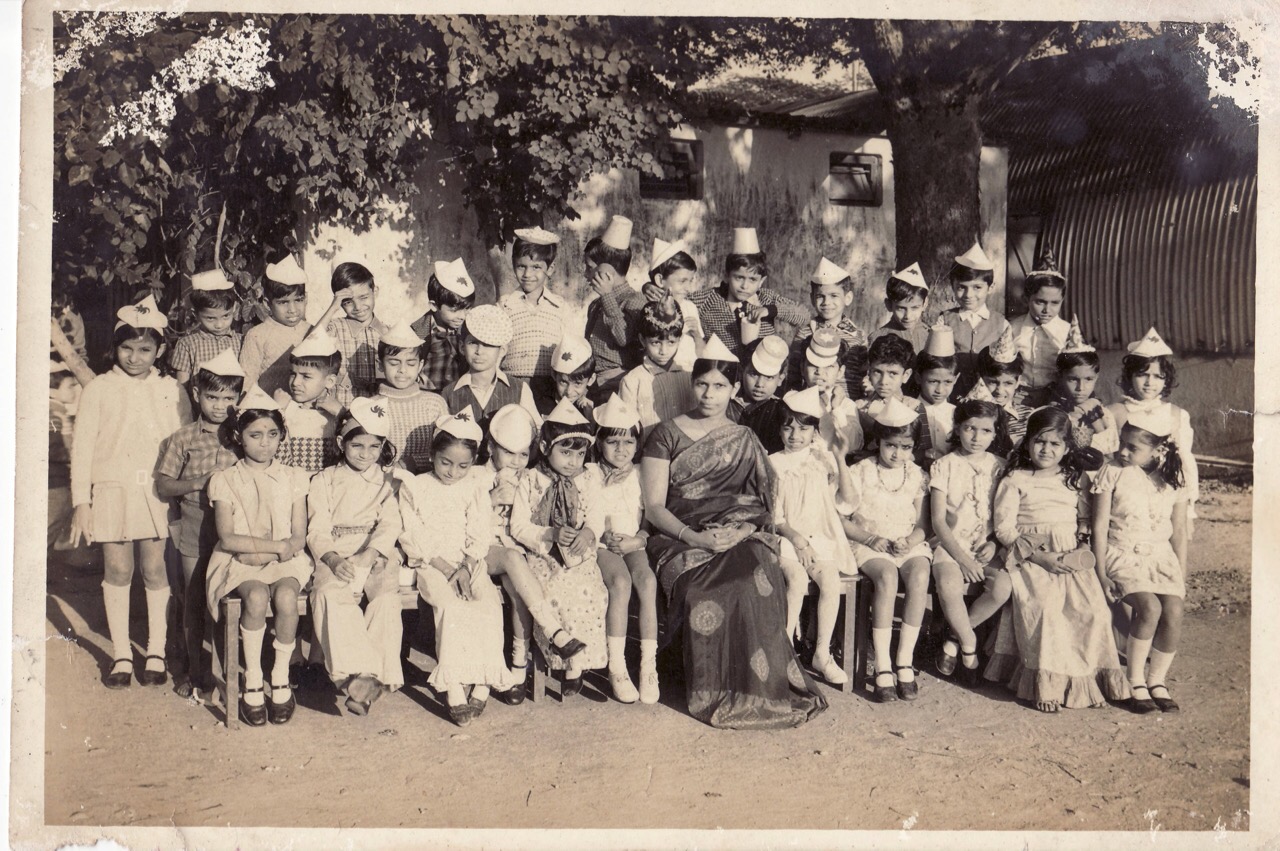