During the various stages of my professional life, I have been impressed by and immensely admired different folks. I have learnt a lot from them and almost always I found them to be different from me. And it is that difference that I have tried to study and then learn. (and sometimes chose not to learn – after deciding that I am a very different person and not every thing will suit me).

In the first couple of years of my job life, when I was soaking in as much as I could and essentially learning from what I was seeing around me in my first brush with corporate life, there was an unforgettable gentleman that I had come across – Nandu Kulkarni. I was never really part of his team except for the last few weeks when I was on a holding pattern waiting for my papers to come to be transferred to our company’s Latino operations in Florida.

Above all, it was his demeanor that had impressed me. Extremely level headed and soft spoken, I used to marvel at how he used to deal with stressful situations with an absolute calm and unemotional approach. I had sought him out to be my mentor and used to often swing by his office to chat with him. He, in a moment of lapse in judgment, no doubt – had taken me under his wings and used to give me quite a few pointers.

After leaving India, I had tried to keep in touch with him. When I visited my old company in Bombay, he was the first person I sought out to meet. And then I lost touch over time. Eventually, I got back in touch and had called him a few years back. I learnt how he had grown a passion for music and that he had moved to Pune.

I was plenty lucky that I was able to meet him during this trip to India when I landed in Pune. He was in Japan with his wife and had returned around midnight the previous night. Graciously, he had agreed to wake up early and make the effort to come and have breakfast with me.

Just being able to see him and say Thanks for every which way he has influenced me was a great achievement already. But, on top of that, the breakfast session was another learning exercise too. As an example, the first thing that struck me was how young he looked. His stance was straight as an arrow and he appeared to have little to no fat. Mind you, he must be at least ten years older than me.

“What is the secret to your health and young looks? Exercise?” I asked.

Unsurprisingly, he keeps up with a routine of biking, walking and hiking. Pune has quite a few hills around it and he takes full advantage of it.

“I have no restrictions on food”, he said.

“Have you heard of Horace Fletcher?”

And from then on, I learnt about Fletcherism, which he swears by. I just downloaded the book today and I need to read it up. But what I liked is it does not ask you to avoid any kind of food. In fact, it encourages you to eat whatever you feel like. This is a little reassuring to me. I have always felt that each human body is too complex and too different to draw a broad brush on any kind of food as either definitely good for all or definitely bad for all. Instead, this focuses on eating only when you feel hungry (not by the time of the day), masticating your food till your saliva has fully processed the food (don’t gulp before it is ready), enjoy all the taste and feel of the food, and stop once you feel you are not hungry any more.

I found quite some similarity with another philosophy of Staying in the Now. One of the practices encouraged there is to slowly chew your food and focus all your attention to food.

After some time of doing this, apparently, Nandu has been able to get off all medicines. (He had a heart attack once before). His sum total medicine intake in a year is about a couple of paracetamols if he runs fever and such.

Another interesting story I heard from Nandu was his trip to Antarctica. The real interesting part was how he took the Polar Plunge. To be sure you have to dive into water at freezing point. And as Nandu pointed out, he can’t even take a cold shower. But apparently, he got over his fear and went for it. And swore that it was one of the most exhilarating and satisfying experience ever. I am pretty sure that the satisfying part was a post facto feeling 🙂 I have a deathly fear of heights. Maybe this will get me to do a skydive once in my lifetime.

One breakfast is too little a timeframe to catch up with Nandu. But I needed to go and he, I am sure was tired too.

“Next time, please meet again. Do not use your algorithm.”

The algorithm he is referring to is what I had explained to him a few minutes earlier. There are about a dozen people I know in Pune. I was going to be there for less than a day. I explained to him that I was prioritizing initially to meet teachers, parents of friends, elders, seniors and people who I had not seen for the longest time first.

I laughed out loud and promised that I will make an exception for him in my algorithm. 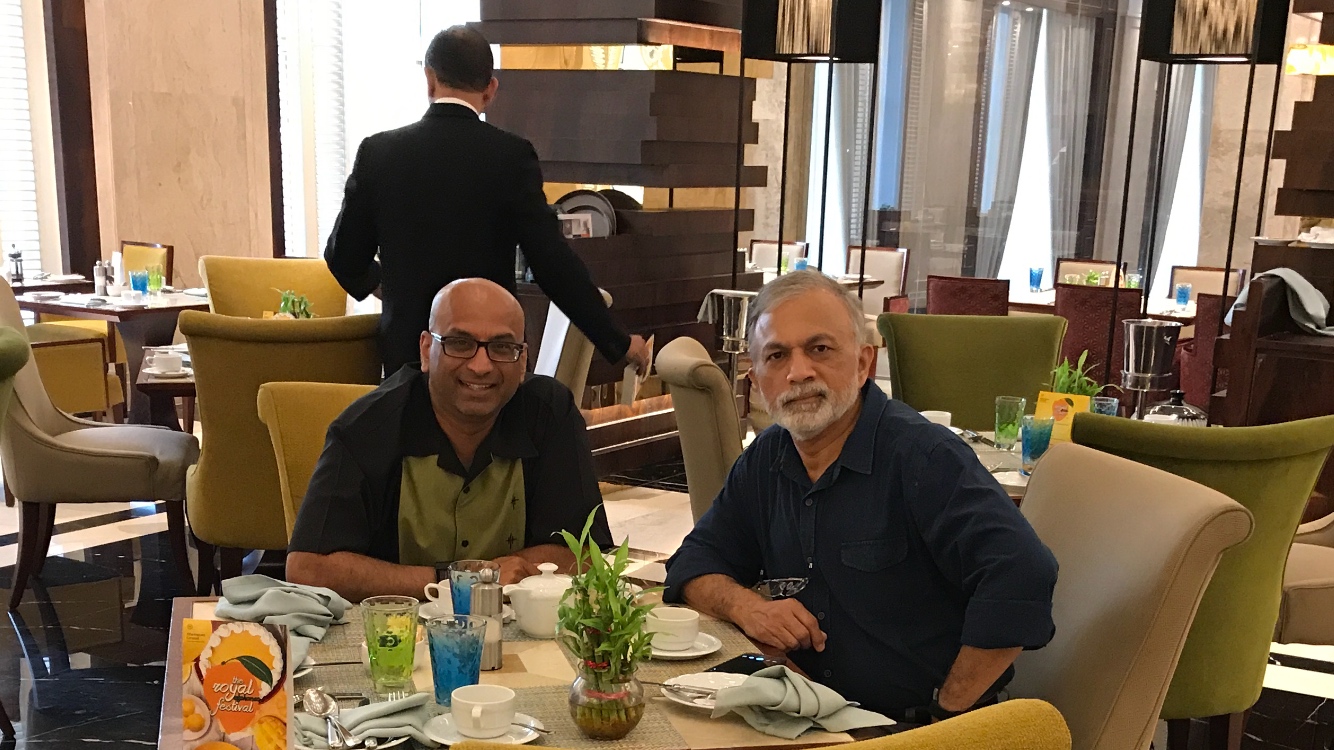