I had kept the last meeting in Pune for one of the most interesting persons I have known – Dhananjay Nene. We called him Danny and in fact, still do. We have crossed each other’s paths many many times.

First, we went to MBA school together in IIM- Ahmedabad. Both of us had a passion for computers and programming those days. We both joined the same company after our MBA. We even worked in the same project for a year and a half!!

We came to the USA literally in the same flight! We worked in the same office in US. We stayed in the same apartment complex in Florida. We shared the same rental car. And then we moved to Dallas together too!!

As if that was not enough, both of us were – and still are – married to Architects – Supriya and Sharmila!!!

Somewhere around 1995, we split ways. He quit the company and joined a large telecom company in the Northeast. I quit a few months later and joined a start up in Dallas itself.

I knew what I wanted to talk about when I met him. Of course, after I was done with enquiring about his family – especially his mom who won the battle against cancer a few year back. The first topic was how he chose to stay with programming. I moved on from programming at some point of time. One might even suggest, with some grain of truth, that my programming was bad enough that I made the cut to be a manager 🙂 But programming was Danny’s passion. He stuck to it.

Moment I saw him, I had flashbacks of furious typing on the keyboard (he was probably pushing 100 keystrokes per minute those days – we used to joke behind his back that approximately 50 of them were backspaces 🙂 ).

“Are you still typing that fast?”

“Faster. Now I use a mechanical keyboard”.

Of course, for me –  a guy who pecks on the screen of an iPad to write something, it was a revelation for me that there were actually different kind of keyboards!!

“You are at a vantage point of having stuck to the same thing for nearly twenty five years. Few people can reflect on programming as a process like you can, I suspect. Forget the language and frameworks. I will not understand them any more. But tell me what beliefs have you formed around processes or teams after this long a time”.

“You are not going to like it. It is too contrarian”.

“Try me. I suspect that is the difference. It would take that much experience to negate common wisdom”.

“Well, I do not believe in separation of coding from testing”.

Essentially, he made a case of why creating a separation of labor between coding and testing passes the buck around. A coder has to be the tester. The creator has to guarantee the quality.

“But, what about inherent bias?”, I pressed on.

“Get a peer review done of your code”.

That did make sense to me. But I was not ready for the next one.

“I do not believe in timelines”, said he.

“What do you mean you do not believe in timelines?”

“Artificial timelines are what creates so many quality issues today”.

“But this is not a hobby, Danny. Business speaks in two languages – money and timeline. On what other basis do you create trust or benchmark of performance?”

“How scientific are those timelines? Aren’t those artificial to begin with? Somebody drew a line on the sand to release a product or launch a campaign etc etc – right? It is not like somebody is going to die or a competitor is going to take away the whole market next day, right?”

I will tell you what. I got his point that, essentially, all timelines are artificial. I also got the point that deadlines can drive taking shortcuts and slip ups on quality. But throughout his explanation, I have to admit, I struggled with how I can conduct business without timelines. I have also struggled with the essential definition of quality. Whose eyes is it in – the customer or the creator?

Anyways, this is what I have always admired about him. He has always chosen to take the road not so well travelled and that is why I absolutely love and respect his opinions.

Our final part of the session was talking about his other passion – motorcycles. He has four of them and does a lot of long distance motor biking in India. I hope some day to have one and do some pleasure riding here in America. I did pick up quite some safety tips and lessons for a hopefully-soon-to-be-beginner.

As you can imagine, with his intensely analytical way of looking at things, he gave some great insights into how riding a motorcycle needs you to train your brain differently. He brought it to life with a great example…

“Imagine a cow crossing the road… or in your case, a deer crossing your road. Your brain processes the animal as a danger and a threat. Your eyes are locked on the animal. Here is the thing. You will drive your motorcycle where your eyes are. You are going to run into the animal at that speed. Instead, you have to retrain your brain to focus on the escape route – essentially, the gap between the animal and the road. Preferably the gap that is behind the animal not in front.”

That actually made a lot of sense to me.

It was getting ready to take the four hour drive to Mumbai airport for me. I could have sat for another few hours and soaked in a lot of wisdom from Danny. But I had to take leave for him. Hope to get both of us and our wives together some time… just like the good old days when we had no kids!! 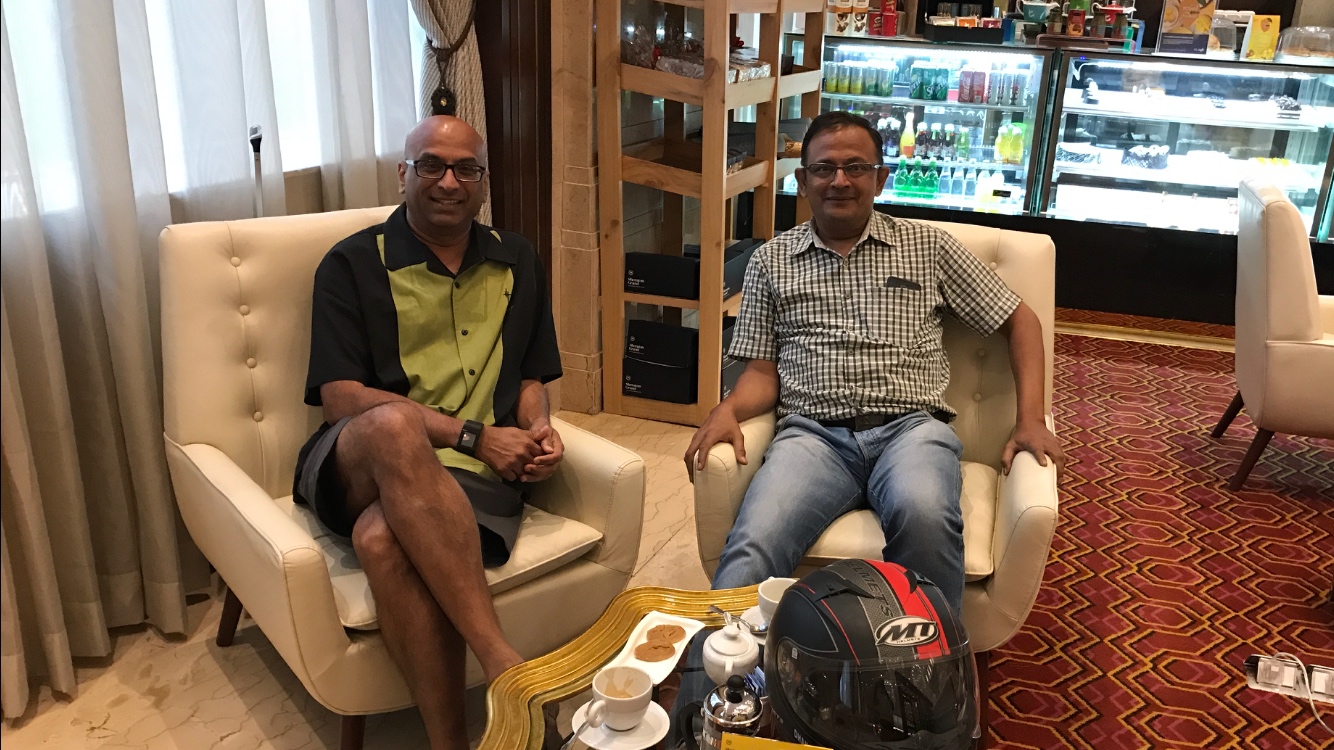